This chapter is related to Section U2(iv) from the 2017 CICM Primary Syllabus, which expects the exam candidate to "understand the pharmacology of thyroid hormones", even though that has never been included in exam questions. Past papers have only included the following:

However, thyroid material is highly prevalent in the CICM Second Part exam, and so there appears to be a gulf of sorts, where the Intensive Care trainee is expected to become confident with the use of these substances somewhere in the middle of their training. To bridge that gap, some kind of vague non-peer-reviewed FOAM blather seems in order, which is the right way to regard what follows.

Chemical structure and chemical relatives of T3 and T4

To classify thyroxine and triiodothyronine as "hormones" would be lazy, but a completely legitimate shortcut for the CICM trainee trying to form an opening statement to a hypothetical SAQ that asks "compare the pharmacology of T3 and T4". To call them "iodinated tyrosine derivatives" would be more accurate and specific. The PubChem entry actually contains a whole host of accurate descriptive terms which could be used as alternatives, including "iodothyronine", "halophenol", and "non-proteinogenic alpha-amino acid". Their less-iodinated cousins and their amino acid precursor are listed below mainly so that we can leave them here and never return to discussing them. 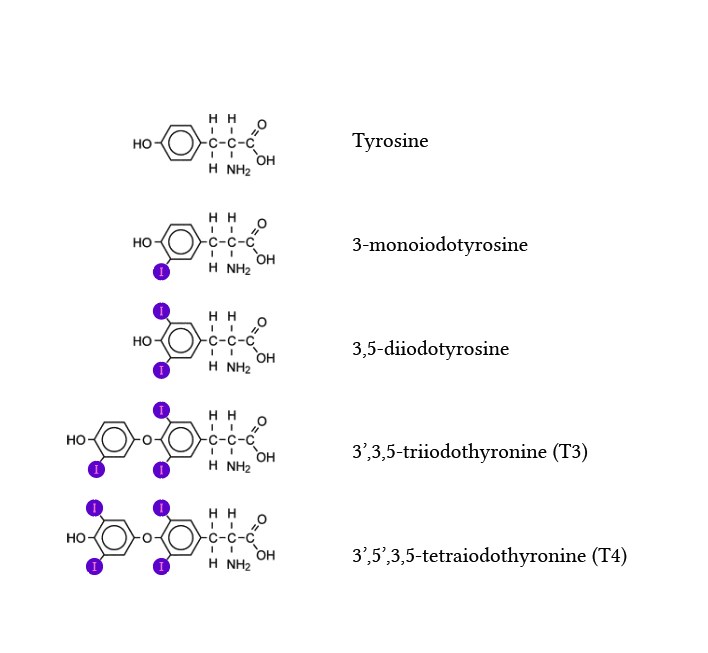 To achieve maximum marks, the savvy candidate would quip about how storebought off-the-shelf thyroxine is actually the levo-stereoisomer, which is the same isomerism as the T4 produced endogenously, making it completely identical to the natural hormone. On the other hand, dextrothyroxine is not produced in the thyroid, and exists in the weird liminal space between patents, where nobody has found a safe pharmacological use for it (though it was at one stage used unsuccessfully to treat hyperlipidaemia).  A list of the chemical relatives of thyroxine and triiodothyronine would probably have to include this dextroisomer, as well as rT3, the reverse metabolically inactive form of T3 which ends up being produced in excess during states of critical illness, giving rise to the sick euthyroid syndrome.

Pharmaceutical presentation of T3 and T4

Levothyroxine, or L-3,5,5'-tetraiodothyronine if you prefer, is the most common form of thyroid hormone replacement, prescribed usually as tablets. There is nothing wrong with triiodothyronine and it could easily be used as oral thyroid replacement instead, but the shorter half-life makes it inconvenient. Conversely, though nothing prevents it from being made into an intravenous formulation, it would make no logical sense to infuse people with T4 intravenously, it being basically a prohormone, and the active form being already readily available as infusion. In this fashion, the two forms of thyroid replacement therapy have become polarised, with T4 made into oral formulations and T3 made into (surprisingly expensive) infusions.

The only other pharmaceutical thing that needs to be mentioned about thyroxine tablets is a requirement for storage at something below room temperature. Specifically, Australian Prescriber recommends you keep it at 8-15 °C, which is roughly the temperature of the dairy compartment in your first-world bourgeoise fridge. Considering the broadly everything, no Australian home should be expected to have a cool dry place by 2050, which makes this even more important - improper storage has been implicated as the cause of up to 5% of the cases of poor response to chronic treatment. Similarly, triiodothyronine solutions are inherently unstable, and can only last for about 30 days, even when stored at 2–8 °C.

Pharmacokinetics of T3 and T4

What follows is a summary of Colucci et al (2013) and Sypniewski (1993). Whole verdant fields of literature flourish in the land of oral thyroid replacement, as hypothyroidism is rife and oral levothyroxine is ubiquitous. In contrast, there is virtually nothing out there for the IV formulation. This online PI document for the sodium salt of liothyronine from the edgily named "X-GEN Pharmaceuticals" is apparently the only available information for the excipients and composition.

It is probably important to mention that the most common method of administration for these hormones is "secreted from the thyroid". 80% of all T4 and 20% of T3 is produced in the thyroid gland under normal circumstances.

After oral administration both T3 and T4 are well absorbed in the small intestine, with the caveat that it should ideally be empty. These drugs tend to interact with basically everything in your diet (calcium, iron, coffee, milk, fibre, vitamin C, soy, fruit, what have you), which means usually NG feeds need to be paused for some hour or so prior and following the administration of thyroxine. Unhelpfully, they also tend to adsorb onto the surface of nasogastric tubes.

Both thyroxine and triiodothyronine have very poor water solubility. Commercially available IV preparations of triiodothyronine get around this by using plenty of alcohol and ammonium hydroxide to solubilise the active ingredient, making it necessary to infuse it via central lines (as it would have an irritant effect otherwise). Fortunately, the human circulation contains thyroxine-binding globulin, a dedicated chaperone protein, and thyroid hormones circulate almost exclusively in the company of this huge 54-kDa molecule. That makes the volume of distribution of T4 only slightly higher than the circulating volume, 11-14L  or about 0.15L/kg. T4 and T3 have very different affinity for this globulin (T3 has 30 times lower affinity) which means the VOD of T3 is much larger, around 1.8L (with most of it ending up in cells). There is also some binding to albumin, and some to transthyretin (which also transports retinol).

On one hand, the small volume of distribution and the delayed mainly genetic-transcription-related effect of thyroid hormones would seem to suggest that a loading dose is not necessary. On the other, the literature on thyroid hormone supplementation, and particularly the literature of the use of emergency thyroid hormone replacement in critically ill patients, seems to uniformly recommend loading doses for bit T4 and T3. For example, the American Thyroid Association
Task Force on Thyroid Hormone Replacement (Jonklaas et al, 2014) recommended loading with 200–400 mcg of levothyroxine or 5–20 mcg of triiodothyronine for myxoedema coma.

But why, one might ask? The rationale for this practice is somewhat obscure, and comes from the distant past. It can be ultimately traced back to Holvey et al (1964), who arrived at their practice by the following series of logical steps:

Thyroxine is deiodinated in the circulation by the unimaginatively named deiodinase enzymes, which are widely distributed throughout the body tissues (liver, kidneys, thyroid, pituitary, CNS, brown adipose tissue, skeletal muscle, and heart). These selenoproteins are only really able to deiodinate the free dissolved fraction of the hormones, which means only about 10% of the circulating T4 ends up metabolised per day, giving it a half life of something like 7.5 days in hypothyroid subjects. This activity produces T3 which is pharmacologically active as well as a series of "reverse" pseudohormones that can still bind the receptor but which have no beneficial activity (eg. rT3). Fortunately under normal circumstances T3 is the dominant product. The deiodination (and other metabolic breakdown pathways) of T3 are much faster, mainly because it is less protein bound, and therefore has a half-life of about 6-10 hours. For both hormones, a small fraction undergoes hepatic metabolism by glucuronidation,  and this fraction appears to increase in overdose (as protein binding sites are saturated), resulting in some significant enterohepatic recirculation (Galton & Nisula, 1972).

This pharmacodynamics section is a summary of the chapter dealing with thyroid hormone physiology.

Thyroid hormones exert the majority of their physiological effects by binding to the thyroid hormone receptor. Zhang & Lazar (2000) explain the cellular mechanism their action over thirty pages, but the main points can be distilled as follows:

The effect of thyroid hormones on visible body functions can be summarised as "more everything". An excellent (because short) table in  Sypniewski (1993) can be reproduced here with basically zero modification, as it distils this subject very efficiently:

The intensivists' attention is turned hard to thyroid hormone supplementation in several specific scenarios, which mainly concern patients at the ragged edge of survival. We are talking about:

The reader will now realise that the cardiovascular effects of thyroid hormones are therefore of the greatest interest to the intensivist, in the same sense that the neurodevelopmental effects probably are not. For this reason, we will go into a little extra depth here. The specific subject is not "what do thyroid hormones do to maintain the function of the cardiovascular system in normal physiological circumstances", but "how does a physiologically unrealistic dose of exogenous thyroid hormone do anything helpful when the patient's circulatory system is disassembling itself in front of me".

Well, in short, triiodothyronine is a potent inodilator.

All good pharmacology monographs need to end with the discussion of adverse effects and overdoses. For thyroid hormones, the undesirable effects are largely the extensions of the desirable ones - for example, maintenance of body temperature homeostasis turns to hyperthermia, control of cardiac catecholamine sensitivity turns to tachyarrhythmia and hypertension, and so forth. The metabolic rate increases, generating pointless energy expenditure and heat, and the appetite increases to accommodate the increased metabolic fuel requirements (which means abuse of thyroxine to achieve weight loss could be pointless).

But, these are cases of slightly misinformed people accessing thyroxine illegally to take small doses regularly over weeks or months, eventually presenting to ED with palpitations and diarrhoea. For the critical care practitioner the more interesting scenarios are thyroid hormone overdoses which are several orders of magnitude in excess of their normal dose, and which present with life-threatening clinical features. These are fortunately very rare, and known mainly from case reports. For example, Khan et al (2019) report a case of severe thyrotoxicosis arising from a 1000-fold drug concentration error, where the poor patient continued taking a daily dose of about 15mg of thyroxine, and eventually presented with what looked like encephalitis and sepsis. Another case report (Allen et al, 2015) presented following an intentional self-poisoning with 15,800 mcg of levothyroxine, also with an altered level of consciousness and tachycardia. For those sorts of situations, in addition to the usual therapies for thyroid storm, the reader is offered some toxicological strategies which were described in the literature as being effective:

Colucci, Philippe, et al. "A review of the pharmacokinetics of levothyroxine for the treatment of hypothyroidism." European Endocrinology 9.1 (2013): 40.

Zhang, Jinsong, and Mitchell A. Lazar. "The mechanism of action of thyroid hormones." Annual review of physiology 62 (2000).