This chapter is only vaguely relevant to Section O2(iii) from the 2017 CICM Primary Syllabus, which expects the exam candidate to "Describe the pharmacology of drugs with anti-emetic activity". The tenuous thread connecting this page to reality are past paper SAQs which asked the candidates to describe the physiology and neural integration of nausea and vomiting:

This probably belongs in the same section as a discussion of antiemetics, as it would occupy the same cognitive shelf for the casual reader.

Neurology of nausea and vomiting:

The best recent reference for the neurology would have to be the chapter by Horn for Nausea and Vomiting (2017, p.15-25).

The neurology of nausea

Like many things in physiology (hello, afterload), there's no agreed-upon definition for what "nausea" is, other than the "unpleasant painless subjective feeling that one will imminently vomit" (Singh et al, 2015). Vomiting is not essential in nausea, and nausea is not a necessary precondition for vomiting. Most authorities on the subject, when asked to explain the neurological basis of nausea, will wave their hands descriptively and talk about complex mechanisms integrating psychological states with the autonomic nervous system, endocrinology, intestinal motility, etc etc.

There appears to be a dynamic nausea threshold. Stern (2002) describes it as a constantly shifting parameter, which can increase or decrease the nauseogenicity of any given stimulus. Under the right conditions, things that were not previously nauseating might suddenly cause vomiting. You might not normally get carsick, until you take a trip with just the right person.

Not a lot is known about where this sensation originates from. It appears as if many of the nauseating stimuli need to pass through the nucleus of the solitary tract, and it integrates all the inputs to coordinate vomiting. It also seems to project to the upper CNS, which makes it an attractive candidate for the Master of Nausea. Or at least the NTS seems important because antinausea drugs all seem target its monoaminergic neurotransmitter connections to the higher brain areas. However, the neurology of this process is far from settled. We are in that shadowy territory of neuroscience where people can successfully publish their interpretations of foggy low-resolution FMRI data. As the result, on the neural map of nausea and vomiting there is a lot of terra incognita, unfinished PhDs lurking in its briny depth.

In Question 3 from the first paper of 2013 the examiners expected candidates to "detail the pathways involved (afferent and efferent limbs) and describe the relationship with the coordinating centres" involved in vomiting. The stem described this as the "neural integration" of vomiting. In the same sense, the baroreceptor reflex is the neural integration of hypotension. In short, the college were looking for a stereotypical answer to the question, "how does the vomiting reflex work". The best reference to answer this is actually a 1986 book chapter by Willems & Lefebvre, but it would be rather difficult to get a hold of this ancient out-of-print textbook. Fortunately, Josef Donnerer's chapter "The emetic reflex arc" from Antiemetic therapy (2003) is somehow available for free online.

There's a couple of different ways to represent this system, one of which is to use the classical pattern applicable to all reflex arcs:

Unfortunately, this unordered point-form list is too long to present in a quick CICM exam answer. A diagram is probably better, as it would reduce the total number of words a person needs to write, and cut precious minutes. A whole range of similar-looking oversimplifications are available from a basic Google image search, and as always Deranged Physiology never shies from adding to a needlessly inefficient abundance: 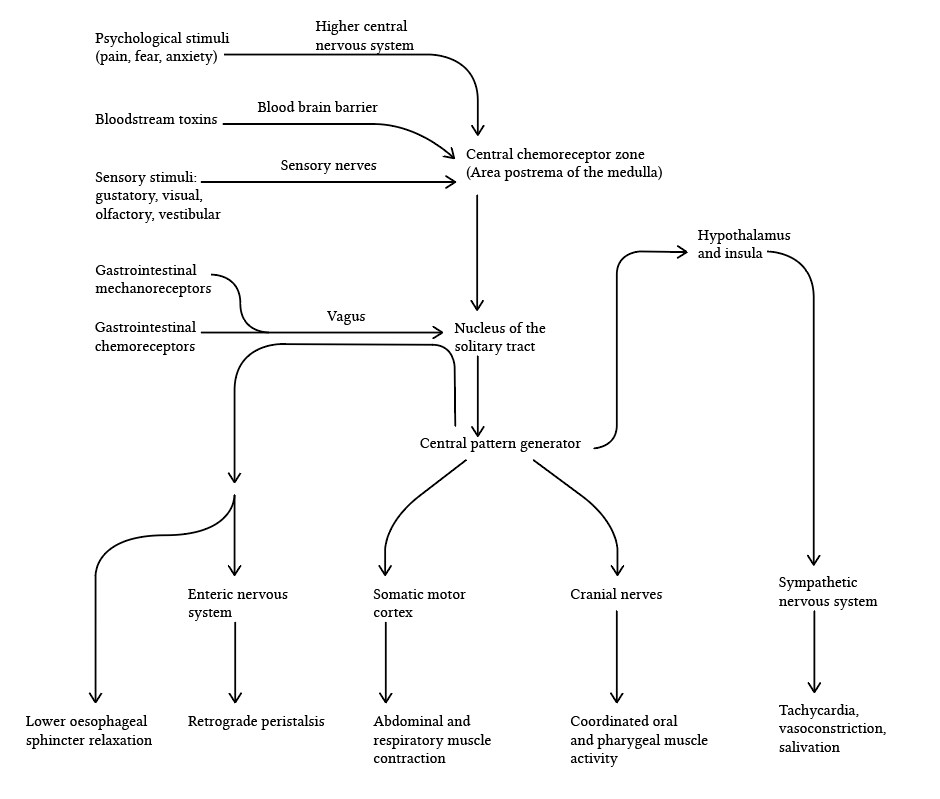 Of course one could never hope to include every possible connection and pathway in something like this, which makes any attempt to graphically represent this subject into a compromise between readability and accuracy. Fortunately, it does not seem as if the CICM examiners expect very much from the candidates when it comes to the neural integration of this process. Their comments for Question 3 were "afferent pathways to the vomiting centre include stretch and chemoreceptors located throughout the GIT via vagal and sympathetic nerves, pharyngeal touch receptors via glossopharyngeal nerves etc".

At least the engineering aspects of vomiting are a lot easier to study, as they are much more straightforward, being the interaction of pressures in an arrangement of tubes.