This chapter does not refer to any Section of the 2017 CICM Primary Syllabus, because nowhere in the Syllabus Document is there anything about erythrocytes spelled out specifically, except as vague waving gesture in the direction of "the physiological production of blood and its constituents". That would be Section Q1(i). Not so, in the actual exam, where erythrocytes have appeared multiple times:

These were largely solid SAQs calling for a detailed understanding of what erythrocytes are, how they are made and what makes them awesome. Judging by the pass rates of 19% and 33%, most of the candidates were not prepared for this.

As far as a single best peer-reviewed resource, the paper by Gordon-Smith (2013) would be ideal because it is densely packed with the right answers, but unfortunately it happens to paywalled. Instead, three free papers can be suggested. Karen Brown (1996) has you covered for erythrocyte metabolism, Dzierzak & Philipsen (2013) for erythropoiesis, and Kuhn et al (2017) for red cell structure and function.

From an evolutionary perspective, we have had these things since the lamprey bodyplan was a revolutionary new concept. Though erythrocytes appear to be an essential part of a vertebrate circulatory system, there's a whole wide range of different possible engineering answers to the same problem (Nikinmaa, 1990). They vary considerably in size, shape,  nucleation, mitochondrial content, and deformability.  Here, an excellent and  underrecognised contribution from George Gulliver (1875) is presented to illustrate the breadth of this diversity: 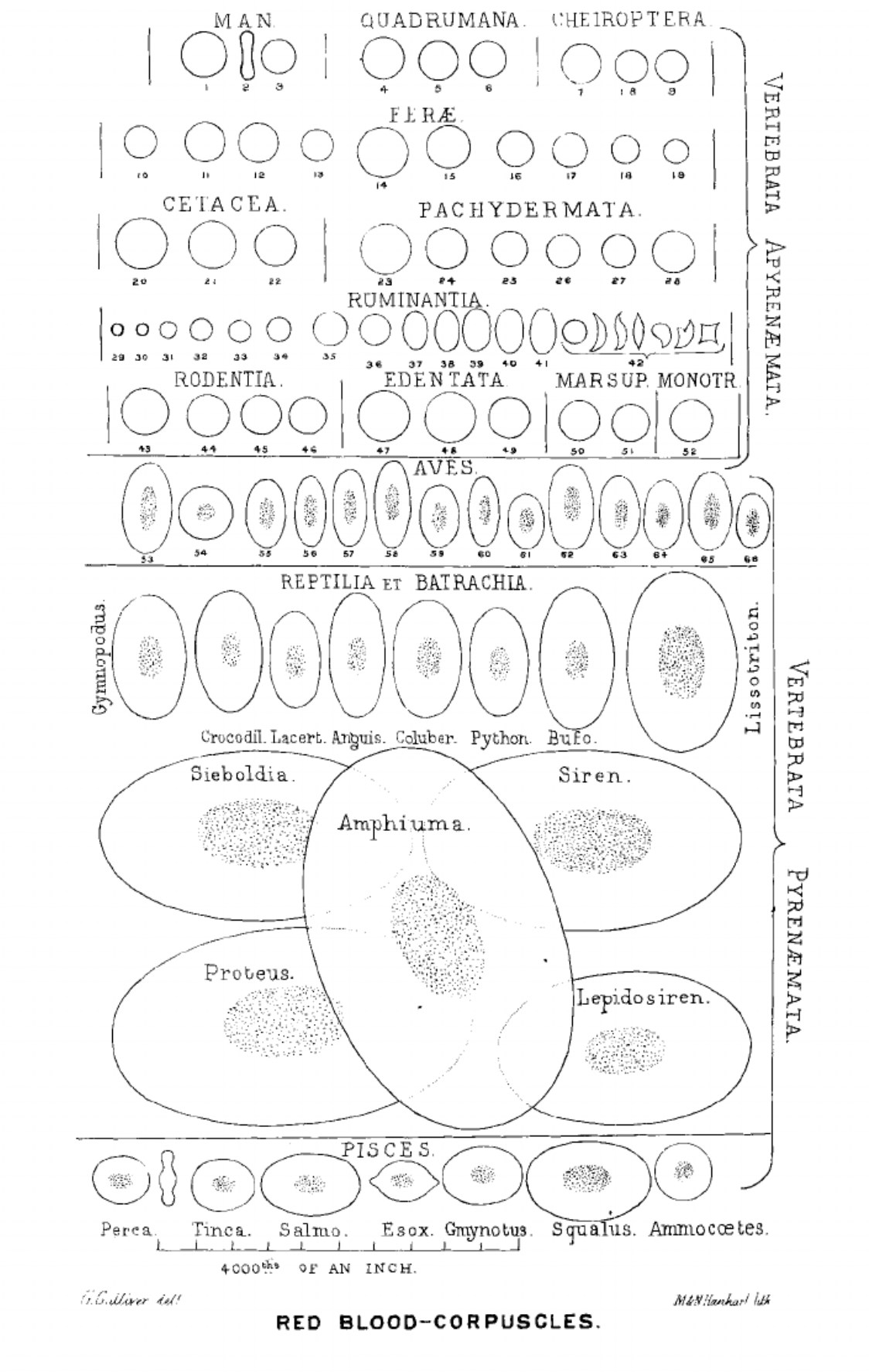 Human erythrocytes are typically only 6-8μm in diameter, and as you can see they are on the lower end of the size spectrum.  For contrast,  Amphiuma, a genus of aquatic salamander, has massive nucleated red cells (48-78 μm), which is thought to be an adaptation to the need for big wide low-resistance systemic capillaries (Snyder & Sheafor, 1999)- as the amphibians have a single ventricle circulation, they really can't afford to have one high-resistance circuit and another low-resistance circuit, so both their systemic and pulmonary circulation basically need to be pressurised to roughly the same level.  What is the point of this digression? They don't have to be biconcave disks.

But why are they biconcave in humans, when clearly there are other options? We speculate; but broadly, the benefits of being biconcave are:

All of these features have some unique (or at least notable) quality which needs to be mentioned for completeness:

As mentioned above, the normal adult RBC has no organelles, which also means no mitochondria. That should raise the question: how, precisely, does it drive energy-dependent cellular machinery? There is one main pathway which splits three ways, and from past examiner remarks, it appears that "a complete answer" would mention these shunts. However, its is highly unlikely that the trainee would ever be expected to know these pathways in enough detail to draw them, or name individual enzymes. Still, in case somebody requires a huge flowchart of the Embden-Meyerhof-Parnas pathway, here is that eyesore, dug out from (of all places) the marketing section of the Sigma-Aldrich website.

In summary, short enough to be memorised five minutes before the exam:

In the college answer to Question 11 from the first paper of 2014, CICM examiners complained that the candidates

"failed to mention, and describe, the RBC’s role in acid base buffering and HCO3- production". There is, in fact, much more:

The three main steps along the pathway from stem cell to red cell are:

Myeloid progenitors are rather boring pluripotent myeloid stem cells, the products of the even less differentiated haematopoietic stem cells.  They then undergo erythroid lineage commitment and become pro-erythroblasts (where they could have also chosen to become granulocytes, monocytes or megakaryocytes). The switch to erythroid lineage is not visually spectacular, and mainly characterised by the expression of different surface CD markers.

Pro-erythroblasts  are relatively large cells with a big nucleus . They reproduce helishly fast; the rate of cell cycle turnover is 6-7 hours, which is something you would otherwise only ever see in embryonic tissue (Vandekerckhove et al, 2009). These are also the cells that produce all that haemoglobin, and in the course of becoming filled with it, they progress through stages:

The additional cellular machinery and nucleus contribute to their size significantly; they are usually about ten times the size of a mature RBC. As they mature, the size of the nucleus decreases. The orthochromaic stage eventually expels its nucleus, along with all their other organelles, to become reticulocytes. This "enucleation" is a super weird process which is basically mitosis, except one cell ends up without any reproductive machinery, and the other cell ends up a "pyrenocyte", which is all reproductive machinery, just nucleus modestly draped in some minimum figleaf of a cell membrane. Carrying on the lewd metaphor, these pyrenocytes present an "eat me" signal to the macrophages of the erythroblastic island by everting their cell membranes and revealing the seductive  phosphatidylserine from its inner surface. Yoshida et al (2005) were able to explain this much better, and without giggling like schoolchildren.

Reticulocytes are the enucleated product of orthochromatophilic erythroblasts. They are sufficiently ready to exchange gas and do other red cell things, and so they are released into the circulation, where they continue to mature over the subsequent 24-48 hours.  During that first couple of days they decrease in surface area by about 20-30% and lose about 10-15% in volume (Waugh et al, 1997). The thing that makes them reticulocytes, the mesh-like mess of ribosomal RNA strands in their cytoplasm, is quickly jetissoned by exosome exocytosis; vesicle-like blebs of membrane are pinched off and sent as flotsam into the bloodstream, to be picked up by the reticuloendothelial system (Blanc et al, 2005). These exosomes are massively numerous, the bloodstream is literally lousy with them, and the only reason you don't typically order an "exosome count" on an FBC is that they are too small to count optically, being about 60nm in diameter, and they seem to be completely physiologically inert, in the sense that we have not discovered any important roles for them. This is remarkable, as apparently, about 1014 of them are released into the bloodstream every day, and they are covered in/full of working enzymes such as acetylcholinesterase. Anyway: when reticulocytes lose their ribosomes, they are considered mature red cells. At about this time they also acquire their final biconcave form.

Rate of haemopoiesis is under complex regulatory control, but for exam purposes one can merely say "erythropoietin". This hormone is one of the endocrine functions of the kidney, and its release is stimulated by hypoxia of the renal medulla and the abundance of angiotensin-II, which is interpreted as haemorrhage. The normal maturation time, from stem cell to red cell, is thought to take about seven days under normal circumstances, and about 1% of the erythrocytes are cleared every day and replaced by new cells. Under extreme stress, this can be markedly increased. A patient with anaemia who is for whatever reason opposed to blood transfusion can have a rate of erythropoiesis which increases their haemoglobin very rapidly, provided the right metabolic substrates are available.

How fast could you erythropoiese, unforgivably verbing that noun, if everything else needed for red cell synthesis was also offered? An excellent example of what is possible can be seen in Myerson  & Carrroll (1955), who reported the case of R.B, a well nourished 34 year old gentleman with hemochromatosis (and therefore abundant iron reserves). Each month they saw him in clinic, and each month they would drain him of up to 2.7 L of blood, with no change in his haemoglobin concentration. At that rate of loss, with a haemoglobin concentration of 120g/L (and thus losing about 324g/month), this man was producing about 10-11g of haemoglobin per day between venesections, which would correspond to an increase of about 2g/L/day. This corresponds nicely to another case report, this time by Bates et al (2008). The authors gave 20,000 units of EPO daily, as well as oral supplemental iron and all the vitamins and proteins you could possibly want. As you can see, the rate of hemoglobin increase was greatest over the first week of therapy, where it incremented by about 3.4g/L/day.

The fate of red cells

The term "fate" is interesting, as it implies a certain fatalistic inevitability. It is unfortunately disappearing from modern writing on haematology and chemistry, being more popular in the days of Rous & Robertson (1917). As discussed to some extent in the chapter on haemoglobin, there are really only two final destinations for the red cells, one being the reticuloendothelial system and the other being haemolysis in the bloodstream. As the latter is not predictable or controlled, it will suffice to say that probably about 10% of them end that way, and this is considered normal. The rest are consumed by the reticuloendothelial system.

The lifespan of an erythrocyte is said to be about 120 days in humans, 30 days in mice and 60 days in rats. In non-mammalian species the red cells are nucleated and have machinery for aerobic metabolism, which makes the lifespan of erythrocytes a little longer, eg. in the metabolically conservative reptiles it averages 600-800 days. During their lifespan, red cells undergo a variety of changes, well summarised by Lutz & Bogdanova (2013). In short:

The reticuloendothelial system, for this purpose mainly represented by the spleen and liver, identifies senescent red cells by these and other criteria. In short:

The cells identified in this way are phagocytosed by reticuloendothelial macrophages.

Byers, Timothy J., and Daniel Branton. "Visualization of the protein associations in the erythrocyte membrane skeleton." Proceedings of the National Academy of Sciences 82.18 (1985): 6153-6157.

Wintrobe, Maxwell M. "Variations in the size and hemoglobin content of erythrocytes in the blood of various vertebrates." Folia haematologica 51.32 (1934): 32-49.

Uzoigwe, Chika. "The human erythrocyte has developed the biconcave disc shape to optimise the flow properties of the blood in the large vessels." Medical hypotheses 67.5 (2006): 1159-1163.

Waugh, Richard E., et al. "Surface area and volume changes during maturation of reticulocytes in the circulation of the baboon." Journal of Laboratory and Clinical Medicine 129.5 (1997): 527-535.

Rettig, Michael P., et al. "Evaluation of biochemical changes during in vivo erythrocyte senescence in the dog." Blood, The Journal of the American Society of Hematology 93.1 (1999): 376-384.

MYERSON, RALPH M., and IRVIN N. CARROLL. "TREATMENT OF HEMOCHROMATOSIS BY MASSIVE VENESECTION: Report of a Case Treated by Removal of Forty Liters of Blood in Twenty-Eight Months." AMA Archives of Internal Medicine 95.2 (1955): 349-353.