Structure and function of platelets

This chapter is relevant to Section Q1(iv) of the 2017 CICM Primary Syllabus, which expects the exam candidates to be able to "describe the process and regulation of haemostasis, coagulation and fibrinolysis." Specifically, much CICM examiner's interest in haematology seems to revolve around platelets and the drugs that inhibit their functions. Platelet-focused questions in the CICM First Part exam have consisted of the following SAQs:

But then of course there's all the questions asking you to compare aspirin and clopidogrel.

Linden (2016), Jurk & Kehrel (2005) or Gremmel & Frelinger III (2016) make good recommendations if anybody wants to read a more professional discussion of this topic. For most people, just Linden will be enough for basically everything except the role of platelets in haemostasis, and the haemostasis chapter probably covers that well enough.

Only mammals have platelets. It is a relatively recent invention, even though the idea of having some sort of dedicated cells to clog the woundhole appears to be a highly conserved strategy from an evolutionary standpoint. The wounded larvae of Manduca sexta and the injured sipunculid Themiste petricola all have rapid cell-mediated primary haemostasis mechanisms. Like the other lineages of blood cells, they originate from the bone marrow. The growth signals which seem to promote their differentiation from the stem cells are the granulocyte colony-stimulating factor and thrombopoietin, one of the endocrine products of the liver and kidney. The process is actually rather involved, and if the reader wishes to delve deeper,  Kaushanksy (2015) is great if you have access to Seminars in Haematology, except who does, in this economy. That's fine: you can get Schulze & Shivdasani (2005) or Change et al (2007) for free.

Life and fate of platelets

They are billions; the average platelet count is 150×109 to 400×109 per liter, which means a healthy bloodstream may have up to three trillion platelets in it. Once in the circulation, a platelet has a lifespan of approximately ten days, which means your bone marrow at a basic steady state is producing enough platelets to increase their count by 15-40×109/L per day.

Each platelet has an internal apoptotic clock, which runs without a nucleus, and which determines this ten day lifespan (Mason et al, 2007). This clock consists of an antagonistic balance between the pro-survival protein Bcl-xL and pro-apoptosis protein Bak. Bak always wins, and the platelets undergo several changes which include surface phosphatidylserine upregulation, deglycosylation of membrane glycoproteins, and "desialylation" where sialic acid residues disappear from their surface. The upshot is that there is an internal process that gradually moves platelets towards their destruction, and it continues even in storage, which limits the lifespan of refrigerated pooled platelets to about 4-7 days (Ohto et al, 2009).

They are tiny and cute. It would have been lovely to have retained some of the archaic terms for them (in medicine, we have done that for much stupider things), but the author is probably in a minority with his fondness for blutplättchen or poussière de sang ("dust of the blood"). Each platelet is an anuclear self-contained molecular machine packed with the exact things it needs to do its job, including glycogen and mitochondria which it requires for ATP production. This excellent graphic from George (2000) is included here with minimal modification because it represents the important parts very well (but the scan did not work well for the original labels); whereas the best non-pictorial description of platelet structure has got to be Fritzma (2015). 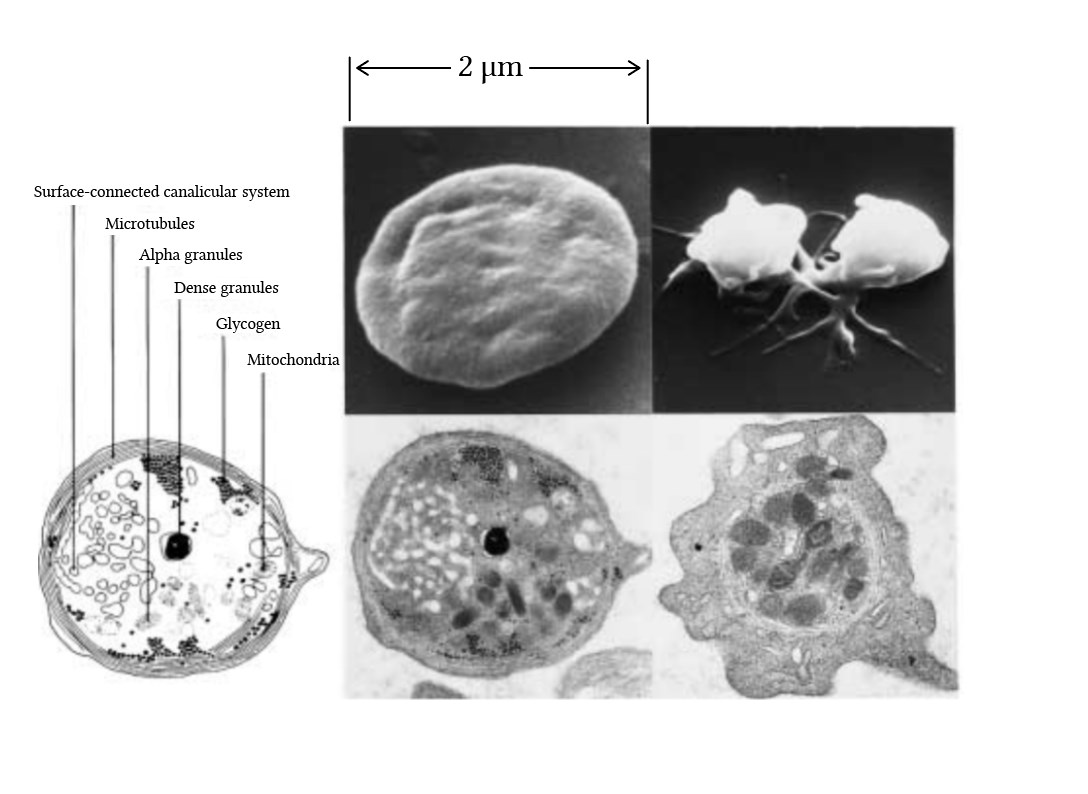 Not shown is the platelet glycocalyx, which is thicker than most other cellular glycocalyces (20–30 nm), full of necessary procvoagulant molecules and covered in the negative change that repels other platelets.

Function of platelets in the process of haemostasis

To say "they are central to haemostasis" would probably not be enough detail, but would be fairly accurate. Consider any TEG or ROTEM you might have seen of a severely thrombocytopenic patient. To offer a detailed explanation of what platelets actually do would have required a detailed explanation of haemostasis, and that is handled well enough elsewhere. Instead, a brief exam-ready summary will be produced here as a ready answer for questions like Question 4(p.2) from the first paper of 2009.

Role of platelets in primary haemostasis

Role of platelets in secondary haemostasis

Geddis, Amy E., and Kenneth Kaushansky. "Endomitotic megakaryocytes form a midzone in anaphase but have a deficiency in cleavage furrow formation." Cell cycle 5.5 (2006): 538-545.

Sungaran, R., B. Markovic, and B. H. Chong. "Localization and regulation of thrombopoietin mRNa expression in human kidney, liver, bone marrow, and spleen using in situ hybridization." Blood, The Journal of the American Society of Hematology 89.1 (1997): 101-107.