Blood groups and the process of cross matching

This chapter is relevant to Section Q1(ii) of the 2017 CICM Primary Syllabus, which expects the exam candidates to "explain the major blood groups and process of cross matching". It has appeared in Question 2 from the second paper of 2010 and Question 9(p.2) from the first paper of 2008, as well as in some Part Two exam papers, where an abbreviated revision page reminds people how this works in case they forgot. In a refreshing change for these syllabus items, this one has discrete boundaries for what is expected, and you can see the edges of it when you study it.

For something as ubiquitous and straightforward as this, it was surprisingly difficult to find a good single article to explain all the important parts. Fortunately Pourazar et al (2007) is close enough, and has the benefit of being free. Though it is not a peer-reviewed resource, transfusion.com.au is a pretty good resource for this topic, and contains extensive (but readable) documentation for health professionals, with a more fastidious referencing style then what you might get from many textbooks.

The need to be able to safely perform transfusion is the main reason we even have blood groups as a concept. The basis of the blood antigen grouping system is that some people have red cells with antigens which will trigger an impressive immune reaction if they are infused into other people, because those other people have antibodies that recognise them. If it were not for this inconvenient problem, we would not look twice at most of these antigen molecules, as their physiological role can be described as "background extras". For example, A and B antigens are oligosaccharides thought to be a part of the glycocalyx, in the sense that we find them sitting around in the glycocalyx of the red cell, and the Rhesus antigen is a transmembrane transport protein.  For even more example, here's a breakdown of about thirty blood group antigens from Daniels (2006), featuring their biochemistry and possible function. 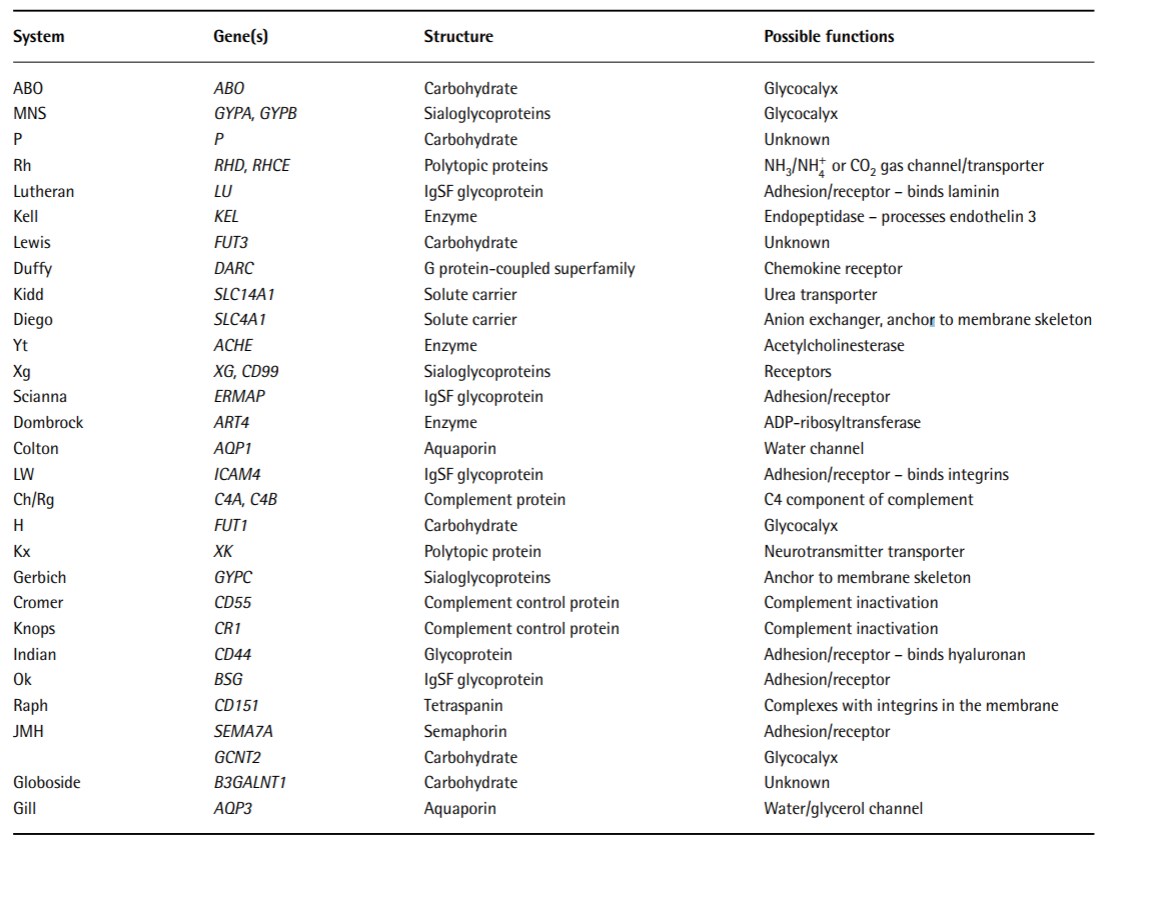 As you can see, they are numerous, all totally different, and none of them have anything in common, except that they tend to resemble some naturally occurring chemical for which you do not develop self-tolerance. That forms the basis of their antigenicity. For example, for the AB group, at some stage in your life (usually in the first 3-6 months after birth) you will encounter a whole host of different oligosaccharides and develop antibodies to the ones which do not resemble your own native oligosaccharides.

Consider an example. Let's say your own red cells may be sprouting Oligosaccharide A. Then, in the process of exploring a Duplo block with your mouth you encounter a species of kitchen floor yeast (Horrendosporidium sp.) with a cell envelope looking exactly like Oligosaccharide A. You will not form an antibody to this yeast envelope component, as self tolerance must be maintained. Then, on the other side of the kitchen, you may encounter a species of Horrendomyces sp. which has a cell envelope closely resembling Oligosaccharide B. Through your exposure to this antigen, you will develop antibodies (IgM) which will forever recognise and destroy Horrendomyces on sight. Unfortunately, they will also react to any blood cells with the B antigen on their surface.

Why, one might ask, do we tolerate this seemingly useless and inefficient diversity, as a species?  Why indeed. The physiological purpose of anything is of course a purely speculative philosophical exercise, and so with this. But intelligent people have had a poke at this question. For example, in the middle of the massive biochemistry textbook by Berg (2007), the author speculates that a diverse range of self-tolerance is a necessary strategy for a species to remain robust in the face of pandemic infections. If all individuals in a population had a uniform level of self-tolerance for Horrendomyces and their immune systems ignored it completely, an epidemic of horrendomycosis could conceivably come along and wipe out the entire species. This sort of diversity comes from vigorous genetic mixing; human and primate societies which are characterised by their isolation (mountain gorillas, Siberians, the Swiss) tend to have antigenic monoculture (eg. 88% of all chimpanzees are blood group A).

To recover from the digressions above, the following facts can be firmly stated about ABO blood group phenotypes:

Additionally, there is the Rhesus antigen, named in error after the rhesus macaque. This system remains relevant because of the possible haemolytic disease of the newborn which could occur if the Rh-negative mother becomes exposed to foetal Rh-positive blood.

How common are these phenotypes in the human population?

In case you were about to completely ignore these irrelevant-seeming statistical factoids, be warned: the "prevalence of blood groups in the general population" was considered an essential part of the answer to Question 9(p.2) from the first paper of 2008. Fortunately for the exam candidate, these numbers must all be completely random, as the prevalence of red cell antigens in the community varies considerably with the ethnicity of the population and the geographic region, which means that theoretically one could pull out any plausible-sounding numbers and still be accurate. The ones quoted above come from the Australian Red Cross.

Otherwise known as "typing" or "grouping", this is an essential pre-transfusion test.

Pretranfusion compatibility testing ("group and hold" or "crossmatch") tests the patient's blood with a donated sample to make sure they are compatible, i.e. no agglutination takes place. This typically detects ABO incompatibilities, but could also pick up weird antibody groups which you might not have expected. The benefit of this process is that it labels a donated sample of blood as "compatible", meaning it is safe to transfuse that bag of donated cells into the recipient. The Australian Red Cross has a page that describes the process of compatibility testing with references.

A much more detailed account of what is (has to be) an incredibly precise piece of laboratory work is described in the ANZSBT Guideline from 2016, which will surely be out of date by the time that you are reading this. It, in turn, is heavily based on the British version (2014).

ANZSBT: GUIDELINES FOR THE ADMINISTRATION OF BLOOD PRODUCTS (2018)