Constituents and functions of plasma

This chapter is relevant to Section Q1(iii) of the 2017 CICM Primary Syllabus, which expects the exam candidates to "outline the constituents and functions of plasma." It was the subject of just one SAQ, Question 16 from the second paper of 2014. The college answer was particularly good, as parts of it actually demonstrated what was expected from the candidates. Specifically, it appears that a brief outline or list were the main objective, which thankfully limits the scope of what must be written about this potentially massive topic.

Plasma  is the cell-free liquid component of blood

As a single point of reference about plasma, and specifically plasma proteins (which are the most interesting part of plasma), the best paper would have to be the highly cited famous roundup of the human plasma proteome by Anderson & Anderson (2002). For the casual reader, Mathew et al (2018) is also good because somewhere in the middle it contains a nice pointform summary of all the functions of plasma.  For the reader who is whatever is the opposite of casual, Johan Schaller's Human blood plasma proteins: structure and function (2008) can be recommended with some hesitation; it is the definitive resource on all things related to plasma protein biochemistry.

The term "plasma" was already in use by biologists and medical scientists before it was borrowed to describe ionised gas. It seems impossible to track down its origin, but at every step of the way the term seems to have been used to describe the same thing, the liquid non-cellular part of blood. The term "plasma" is not interchangeable with the term "serum", which usually means "liquid potion that remains after the blood has clotted". They do contain many of the same components, but, to borrow a turn of phrase from Anderson & Anderson (2002),

"Serum, the protein solution remaining after plasma (or whole blood) is allowed to clot, is very similar to plasma: prothrombin is cleaved to thrombin, fibrinogen is removed (to form the clot), and a limited series of other protein changes (mainly proteolytic cleavages) take place. We use the term plasma preferentially to refer to the soluble proteome of the blood because it is the parent mixture and because there may be persuasive reasons to avoid an in vitro proteolysis process (which may unexpectedly alter some proteins) as part of the preferred sample acquisition protocol."

On first inspection, the question "what is in plasma" should be relatively easy to answer for a person who has to look at blood tests on a regular basis. The normal ranges of those blood tests are the constituents of plasma. Thus, plasma has about 140mmol/L of sodium, 24 mmol/L bicarbonate, 40g/L albumin, and so on. In short, the real trick is to somehow condense the response to something meaningful but brief. To borrow a system from Schaller, the main components of plasma are:

It would appear that the CICM examiners did not want very much more than this. In their comments for  Question 16 from the second paper of 2014, they tersely pointed out that their question only asked "to “list” the constituents, so the level of detail required to score marks reflected this", i.e they basically admitted that the exam candidates were expected to regurgitate a memorised pile of facts without any further processing, and in fact further processing would not have attracted extra marks.

Protein composition of plasma, by concentration

Many authors produce various massive lists or horrific cheese-wheel pie charts of plasma constituents, but the best representation of the exact numbers and scales we are working with probably comes from Anderson & Anderson (2002). The original graphic is presented here with minimal alteration, except rotated 90 degrees to protect the necks of the readers. 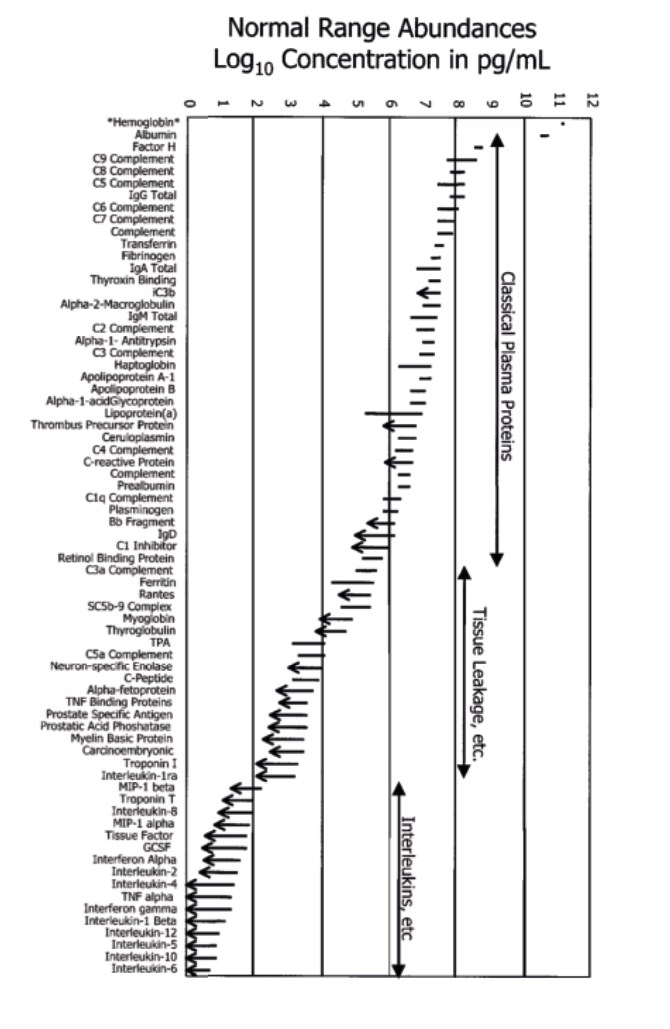 These are so numerous that it would be impossible to list them all (however, people have tried). As a group they defy classification, and whatever arbitrary classification we tend to settle on changes every fifteen minutes anyway. For example, one broad classification was offered by F.W. Putnam, who suggested we separate them into "true" plasma proteins (i.e those that carry out their function in the actual circulation) and everything else (for example, proteins like myoglobin which leak out only during damage to muscle, or various messenger molecules). Of course this is still arbitrary and difficult to work with (where do you put IgG?) but it serves as a basis for other classification systems. Alternatively, you can classify the plasma proteins according to their chemistry:

This seems to be the system which the college answer to Question 16 had settled on. The argument for such a chemistry-based system is that it separates the protein population into classes that are non-overlapping, and from which you can derive some information about the protein's role and behaviour in the bloodstream. So, following logically from this, why not put function first? The best functional classification is probably the one by Anderson & Anderson (2002), as it does exactly this.

This classification has merits, but if we are going to maintain some semblance of exam-savvy cynicism, we will need to treat the CICM examiner answer as the Scrabble official dictionary.

As the function of plasma, that all-powerful liquid organ full of biologically active goodies, can be broadly summarised as "sustain life", to bring it all together into a single paragraph would be an unjust oversimplification. However, that's clearly what is expected from the exam candidates, and something suitably glib is available in the grey summary box at the beginning of this page. So as not to duplicate this short summary, and also to avoid writing 30,000 words about what the plasma really does, what follows is basically a list of links to local and distal chapters where more detail about specific functions of plasma proteins can be described. More will be added to this directory as other elements are added to the CICM revision notes.