This chapter is relevant to Section Q3(i) of the 2017 CICM Primary Syllabus, which expects the exam candidates to "outline the methods for assessing coagulation (including TEG, ROTEM)". It is identical to the content of Question 9 from the first paper of 2017 and Question 8 from the second paper of 2014, which asked the candidates to outline how the tests assessed coagulation (and yes, they included TEG and ROTEM). In a panic, some of the candidates apparently produced elaborate diagrams of the coagulation cascade, as if to ward themselves against evil. To prevent this sort of thing in the future, this short summary offers enough detail to satisfy even the pickiest of marking criteria.

An excellent resource for this information is PracticalHaemostasis.com. You really do not need anything more than that. If for whatever reason one is distrustful of online resources not originating from peer-reviewed journals, one could use Curry & Pierce (2007) or Raber (1990).

Judging from the name, this would have to be something related to prothrombin. Prothrombin, of Factor II, is activated by a number of different mechanisms and forms the final stage of the common pathway of coagulation, where everything converges on thrombin. 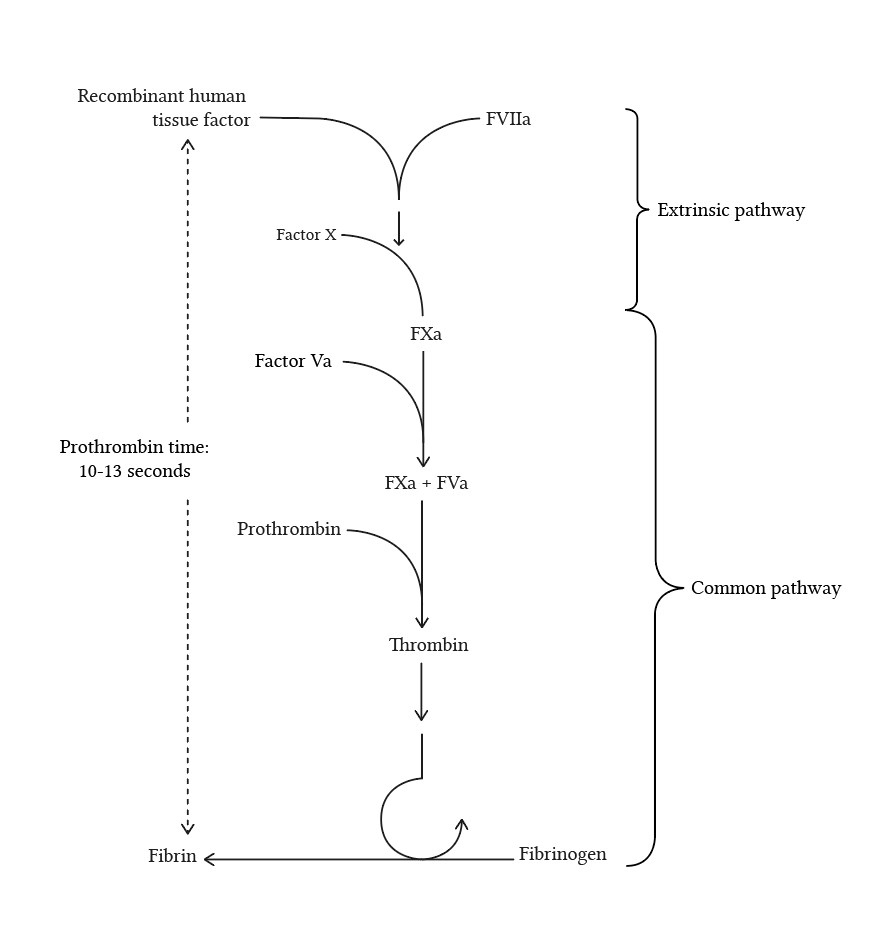 Basically, you add "tissue factor" to a sample of plasma, and measure the time it takes for the sample to clot. The tissue factor is usually a recombinant human tissue factor, but historically all sorts of weird stuff has been used (rabbit brain puree, etc). This activates the extrinsic pathway, which in turn activates the final common pathway; so the PT actually measures both pathways. Typically, tissue factor is added first; as the sample contains citrate there is no calcium available to initiate the clotting cascade. When calcium is added, the timer begins (apparently the manual method of running this test literally involves standing there with a stopwatch, looking at the sample as you manually tilt it through a 90-degree arc). Thankfully it's quite quick: the normal time from calcium to full glug is 10-13 seconds. What you're looking for at the end is the  formation of a fibrin clot (as the test is performed on acellular plasma, there are no platelets here). The assessment of whether or not the clot has formed classically comes from observing that the flow in the tilting test-tube has stopped (or by a number of other mechanised techniques which use various optical methods).

Testing the PT is a way of looking at the function of the Vitamin K-dependent enzymes; namely II, VII and X. Specifically, the rate of the extrinsic pathway is mainly influenced by the amount of Factor VII you have. It has a short half-life and depends on Vitamin K. However, if there is a dysfunction at any step along the pathway, the test will be abnormal, and this includes scenarios where Factor Xa or thrombin itself has been disabled by a directly acting agent. In those settings (eg. dabigatran or apixaban overdose), the PT will be elevated.

Similarly, the attentive reader will be ready to point out that heparin works by an antithrombin-mediated interference in the activity of Factor Xa and thrombin, which means that heparin could also affect your PT. However, we never see this in practice, and always associate heparin use with a raised aPTT. The reason for this is that most commercially available PT reagents incorporate some mechanism of disabling heparin, for example heparinase.

This is a test of the intrinsic and common pathways which takes advantage of the fact that those aforementioned pathways require the phospholipid surface of a platelet to work their magic. To provide this surface without having to use actual platelets, you add some "partial thromboplastin" to the blood sample,. Thromboplastin in an anachronism - it was a weird surrogate for tissue factor; or rather, it is a tissue factor-like protein, already bound to some phospholipid, and derived from cow placenta. Partial thromboplastin is just the phospholipid part (there isn't any tissue factor there), and thus there is no extrinsic pathway factor activation in the test.

The phospholipid is a necessary precondition, but on its own this will not be enough for the protease cascade to proceed. In order to kick off the intrinsic pathway, some sort of negatively charged substance must be added, which could active Factor XII.  In the laboratory, instead of natural FXII activators like collagen, we instead use kaolin ( a clay mineral) or silica. When the calcium is added, the timer starts (as without calcium none of this stuff would work, and all the reagents can be safely mixed together first). 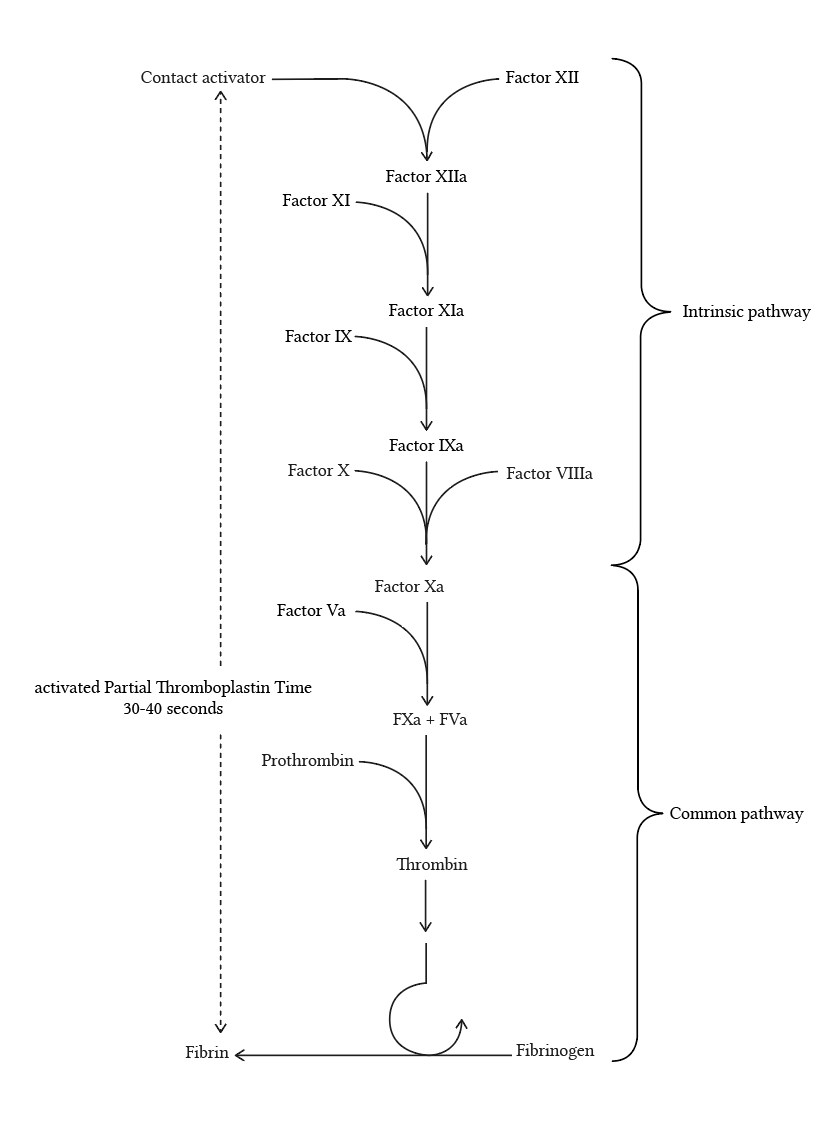 As you can see, Factor VII is really the only factor of note which is not being tested by this pathway. A deficiency of any of the other factors will be revealed by aPTT.

Lets say your sample of plasma is giving a high PT or aPTT - grab your suspicious plasma sample, and mix it with normal blood, 50:50. Obviously, if some sort of "factor inhibitor" is present, the normal blood will also be affected, and the resulting mixture will give abnormal aPTT and PT results.

If there is a factor deficiency, the mixed sample will result in a normal PT or aPTT.

ACT is basically the aPTT but without any control over the phospholipid dose. A fresh whole blood sample is used and the patient's own platelets are the source of the phospholipid. This is a sort of a point-of-care test which is done in situations of extreme anticoaguation, when one must act  quickly to make changes to the coagulation profile, rather than waiting around for the lab to report on the tests.

Thus, the ACT is done by the bedside of patients undergoing cardiopulmonary bypass, ECMO, or (less frequently) dialysis. An ACT of 400-600 seconds is required for the bypass circuit not to clot, and this figure is arrived at empirically - most anaesthetists do not report an excess of clot formation with an ACT over 300 seconds. Similarly, most ECMO circuits are happy with an ACT of 200 or so. By comparison, the ACT of a totally normal non-anticoagulated patient is around 100-110 seconds.

The ACT is performed fairly crudely, by mixing fresh blood with various random garbage (usually, glass beads or kaolin balls) and then measuring how long it takes for a clot to form. This means the ACT tests the entire spectrum of the coagulation cascade, with the exception of fibrinolysis.

ACT will thus be elevated in a wide range of circumstances; a short list could resemble the following:

Why can we not just use the APTT in bypass surgery, if we are merely using (vast amounts of) heparin to maintain anticoagulation? Well. With such quantities of heparin, the normal APTT test will never clot. There is simply too much hyperactive antithrombin-III. Thus, we must perform ACT measurements. However, the longer term ECMO circuits can tolerate a shorter ACT. Moreover, the ECMO patient may have numerous reasons to become coagulopathic, and so an ACT is probably the wrong test to be using (heparin is not the only thing these people got going on). Ergo, aPTT is usually the recommended method of testing heparinisation in ECMO.

The thrombin time (TT) measures the final step of the clotting cascade, the conversion of fibrinogen into fibrin. It involves adding some thrombin (human or bovine) to some of the patient's centrifuged plasma Thrombin converts fibrinogen to fibrin, and thus the addition of lots of thrombin should cause lots of fibrin to appear. It is so simple that some might say it does not even merit a diagram: 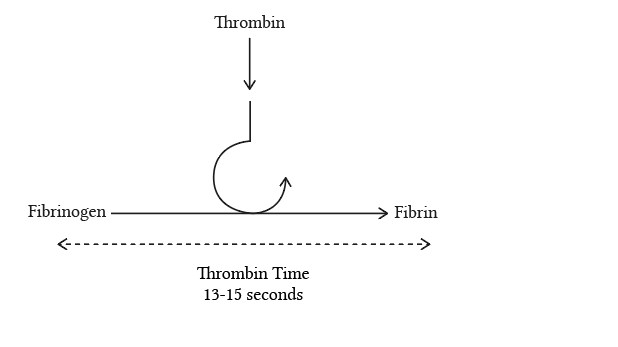 This reaction is usually quite rapid; a normal thrombin time is around 13-15 seconds. The thrombin is naturally antagonised by antithrombin-III, which means that the presence of heparin should cause a prolonged TT. Warfarin, on the other hand, should have no effect on TT whatsoever, as all it can do is reduce the availability of prothrombin (a vitamin K dependent factor). As exogenous thrombin is being added here, there should be no way for warfarin to affect the outcome.

Thrombin time seems like a logical way to assess how well a direct thrombin inhibitor is performing. However, it appears that this test is too sensitive for this purpose. Drugs like dabigatran hang around in the bloodstream, and continue to inhibit the added thrombin in the sample. TT values in excess of 200 seconds were collected in the course of a study by Chin et al (2014). A diluted TT test is available for this purpose, where donated plasma is added to the sample.

Reptilase time and thrombin time are closely related. Reptilase is actually the enzyme secreted vigorously by the South American pit viper (Bothrops atrox) Like thrombin, reptilase catalyses the cleavage of fibrinogen into fibrin and causes clotting. Unlike thrombin, it is under absolutely no control from normal human homeostatic feedback mechanisms. This makes sense, as it is a reptilian venom, designed to kill mammals.

Thus, reptilase time will be abnormally increased in the following circumstances:

This is a meizothrombin generation test, specifically used to measure the activity of direct thrombin inhibitors such as dabigatran and hirudin. Ecarin is a metalloprotease acquired from the venom of Echis carinatus. It activates prothrombin, bypassing the intrinsic and extrinsic pathways. ECT is therefore insensitive to the absence of a large portion of the clotting cascade. ECT will be normal in the presence of heparin or warfarin, or in conditions of even very severe factor depletion. However, the ECT will be abnormal in the presence of any direct thrombin inhibitors. The ECATEM cuvette of the ROTEM analyser contains ecarin, and is equivalent to the ECT.

Anti-Xa levels are an assay for the activity of low molecular weight heparin, as well as some of the anti-Xa oral anticoagulants (eg. apixaban and rivaroxaban). 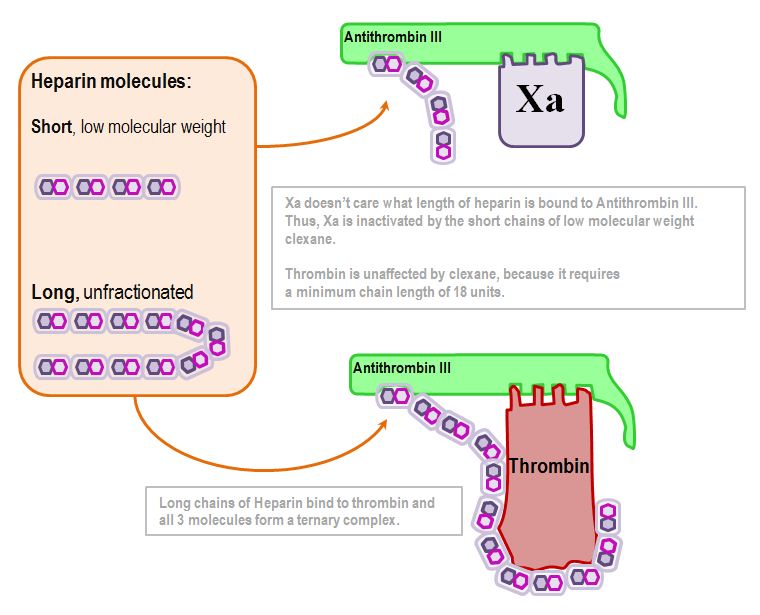 Anti-Xa activity measurements will also be upset by unfractionated heparin, because it will still cause the binding of Xa and antithrombin.

This can be tested using various sorts of assays. For example, the patients heparinised blood is added to a known dose of Xa. The heparin in the blood sample binds the Xa and forms complexes with it; the residual Xa is then measured using an artifical substrate for Xa. The amount of residual Xa is thus an indirect measure of the concentration of heparin i.e the more heparin, the less residual Xa) and so it is expressed as a heparin "level", a concentration measured in U/ml. Because of the routinely subcutaneous dosing of LMWH, the test should be performed at the peak of the activity, which is about 3-4 hours after the injection is given.

TEG and ROTEM are discussed in greater detail in the revision notes for the Second Part exam, purely because that's where most of those questions are asked.  The chapters "Viscoelastic tests of clotting function"  and "Intepretation of abnormal ROTEM data" are probably more of interest for people who are expected to interpret these data and act on them. For the First Part exam, however, the following low-fi summary will suffice: