This chapter is relevant to Section Q2(i) of the 2017 CICM Primary Syllabus, which expects the exam candidates to "understanding of the pharmacology of anti-coagulants, anti-platelet drugs, thrombolytic drugs and anti-fibrinolytic drugs". It has relevance for several questions where tranexamic acid and fibrinolytic drugs were mentioned:

Tranexamic acid has also received some minimal attention in the Second Part exam, where a revision chapter is waiting ready with the answer to a question the examiners haven't asked yet. Thrombolysis for pulmonary embolism and early ischaemic stroke also often draw the attention of examiners, though the thrombolytic agents themselves seldom do. So, here these agents are, side by side.

This drug is older than many of your consultants but no single publication seems to contain every necessary detail, which meant that papers from Wellington & Wagstaff (2003), McCormack (2012) and  Dunn (1999 had to be fused to produce this summary. In short, tranexamic acid is a synthetic lysine derivative, designed in the 1950s when it was observed that the amino acid lysine had some weak antiplasmin activity. In an effort to improve its activity, numerous mercaptocarbonic and aminocarbonic acids were tested, which resulted in the discovery of trans-4-aminomethylcyclohexanecarboxylic acid (only the trans-isomer was effective as an antifibrinolytic). Trans-AMCHA then somehow got pidginised into tranexamic for what we can only assume was some kind of  marketing decision by Kabi.

This substance is poorly absorbed orally, but has a bioavailability good enough for oral administration to be an option, which opens the possibility of outpatient and prehospital administration. It undergoes no metabolism and is excreted renally, which means its dose needs to be adjusted for renal failure. The volume of distribution from a single dose is reasonably small, but with multiple doses or a loading dose, there appears to be some tissue distribution, which means that its effect is sustained for many hours. Otherwise, the half life is very short (2 hours) as it is rapidly eliminated renally. 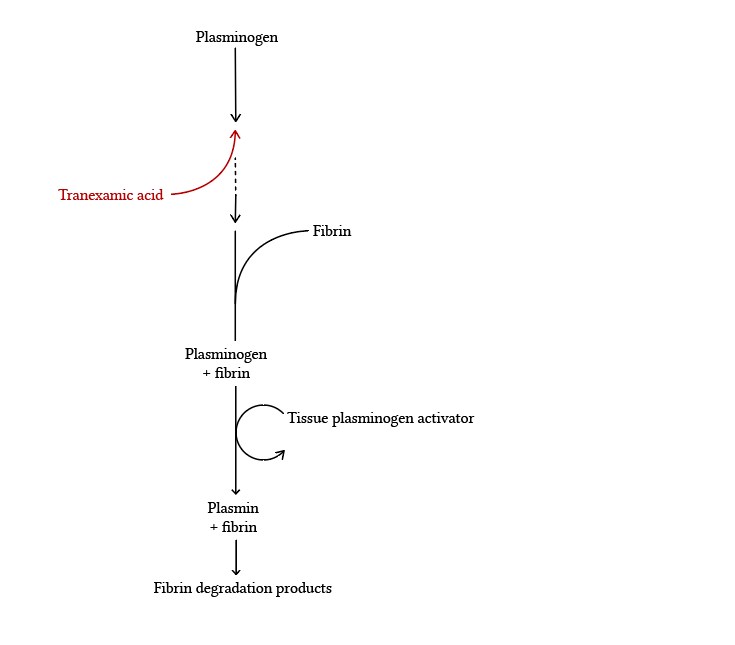 The mechanism of effect is fairly easy to explain, though admittedly looking at the diagram here one might conclude that it would have been better to express it in point form. So:

Side effects are very few. It appears that with enough tranexamic acid you can cause seizures, because tranexamic acid structurally resembles GABA, but does nothing to excite its receptors. It appears one requires insanely large doses, in the order of 7-10g. There is also a theoretical possibility of increased risk of thrombosis, which is still listed among other possible side effects of tranexamic acid. However, there is little evidence to support this. None of the large-scale trials of tranexamic acid had any sort of clinically significant increase their rates of VTE, which is encouraging.

Alteplase, as a representative of its group

The list of available thrombolytic agents includes streptokinase, urokinase, alteplase and tenecteplase, to name just a few. Realistically, it is not essential to know every detail about each of these alternatives. Alteplase, as a common enough agent, is described here in some minimal exam-oriented detail; for the others, the reader is invited to review "Thrombolytic agents" by Colleen & Lijnen (2005) or Jerjes-Sánchez &  Rodriguez (2015)

Alteplase is a recombinant version of tissue plasminogen activator (tPA). It is a 70 kDa protein produced by

transgenic Chinese hamster ovary cells, and therefore obviously ill-suited for oral administration. When given intravenously, its half-life is only five minutes, though some molecules can still be hanging around in some kind of deep compartment after about 40 minutes.

The mechanism of the thrombolytic effect of alteplase can be summarised in point form to facilitate an answer to Question 3 from the first paper of 2010:

These soluble peptide fragments are often referred to as "D-dimers" as they all tend to react with the D-dimer assay, but they are actually rather different (Wilde et al, 1989).