Functional anatomy of the biliary system

This chapter is based on Section N1(ii) from the 2017 CICM Primary Syllabus, where the college expects trainees to be able to "describe the physiology and anatomy of the hepatic and portal blood flow and the biliary tract". That hepatic blood flow is important is something very clearly established by its constant appearance in the  CICM First Part written exam, and entire chapters of the cardiovascular system section are specifically dedicated to the discussion of hepatic blood flow and the portal circulation. It is less clear that the biliary tree is of any importance to the CICM examiners, as only one bile-related question has ever appeared in the past papers (Question 5 from the second paper of 2016), and the model answer spent no more than two lines on the subject of the ducts. Still, there is always the possibility that something sadistic like "describe the functional anatomy of the biliary tree" may one day be inflicted on the candidates.

In preparation for this nightmare:

Readers in need of a more legitimate resource are redirected to Strazzabosco & Fabris (2008) and Tabibian et al (2013) whose papers were the most information-dense sources for this chapter.

Overall organisation of the biliary tree

For once there is some accepted nomenclature for something. The haphazard chaos of naming biliary tree structures has been tidy and calm ever since Jurgen Ludwig had arranged it into order in 1987. It appears he wasn't even intending to do this, the paper was mainly concerned with biliary cirrhosis and only refers to duct classification in its glossary of terms, but everybody seems to be referring to this paper as if it were a papal edict on bile duct morphology (133 citations at the time of writing). Anyway: this classification, ascribed to Ludwig, is as follows:

To start, it would be valuable to impress upon the reader exactly how little these canaliculi are. Here's a slightly colourised SEM image from Motta & Fumagalli (1975), where green biliary canaliculi appear as fine channels etched into the boulder-like surfaces of adjacent hepatocytes. 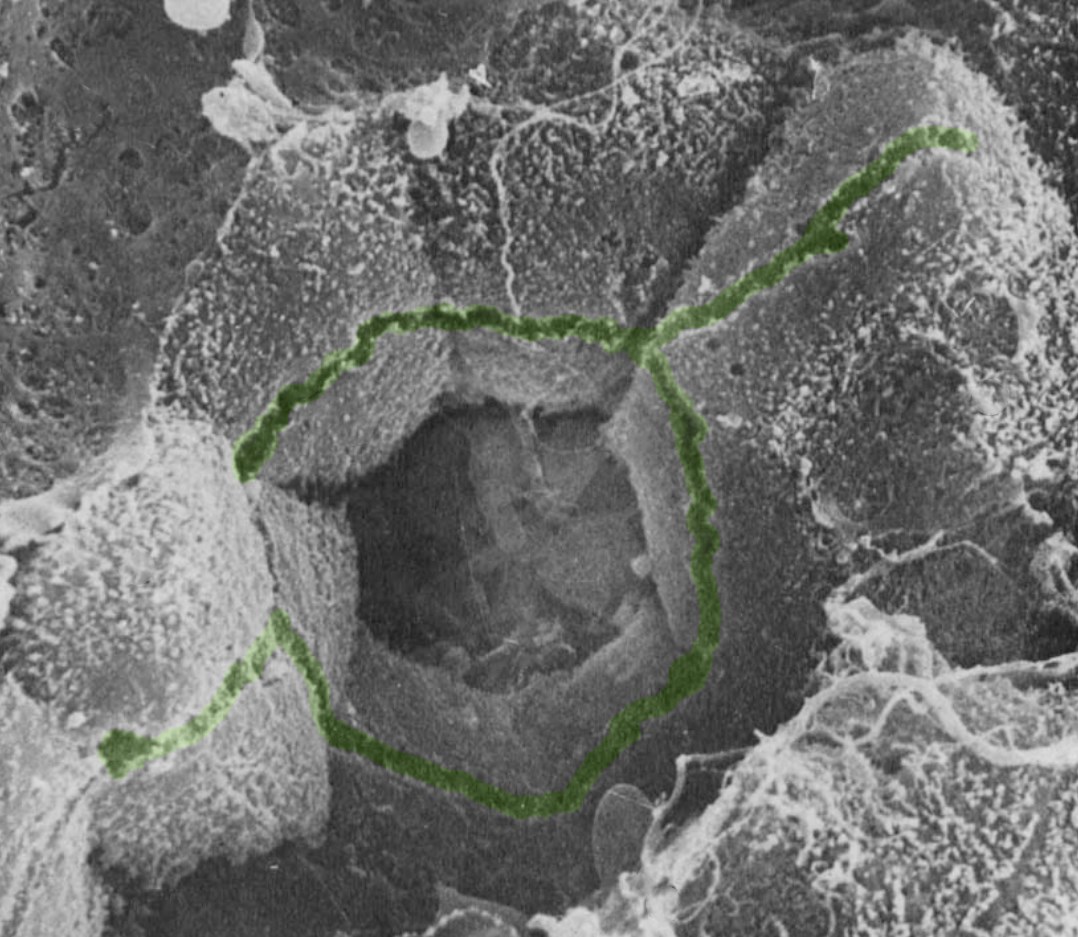 These are the smallest branches of the biliary tree,  barely 1-2 μm in width, making them about four-five times smaller than the normal circulatory capillaries. This is fine: they can afford to be thin, as under normal circumstances no cells will ever be crawling down these conduits. Their walls are formed by the membranes of neighbouring hepatocytes, which are the cells responsible for secreting the "primary bile". Hepatocytes don't just leak bile out of all their surfaces - only the canalicular surface expresses the appropriate channels- which is why this membrane of the hepatocyte is designated "apical". According to Hundt (2021), only 1% of the area of each hepatocyte is dedicated to being a canalicular membrane.

Obviously, trying to secrete anything through the inner surface of a cylindrical object 1-2 μm in diameter would be very frustrating if it were a smooth tube with a dumb tube's surface area. Fortunately, the apical membranes of hepatocytes are well supplied with microvilli, and the canaliculi themselves are so numerous that the total surface area ends up being absolutely massive. Here, images from Arterburn et al (1995) and Yamamoto et al (1990) illustrate the scale of the system: 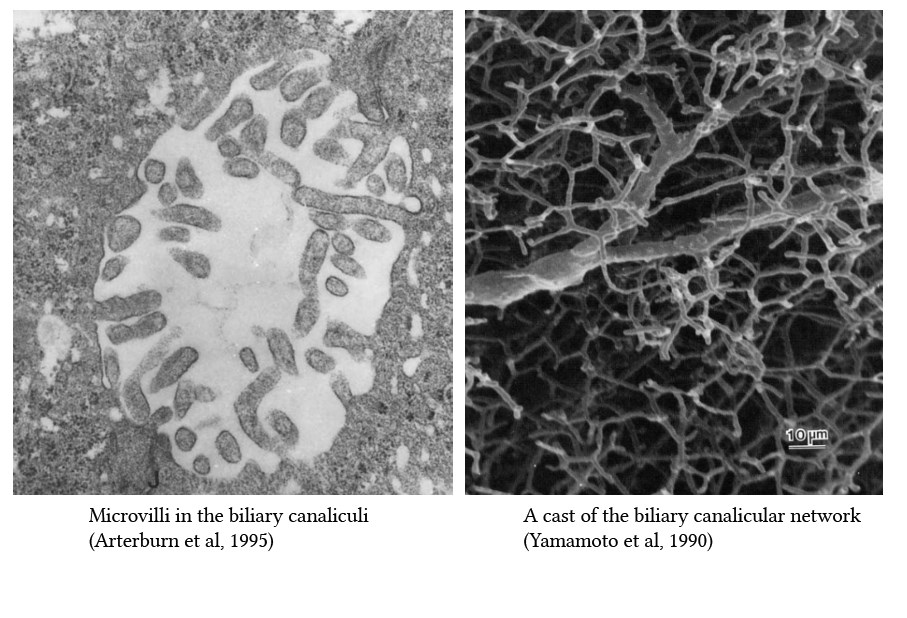 How large a surface area is this? Apparently 400cm2 according to poorly referenced but sincere-sounding sources. This probably comes from data by Ludwig et al (1998), whose excellent study used a 3D geometric model based on serial paraffin sections and arrived at a figure of 336 to 575 cm2, with a mean area of 398cm2.  The presence of microvilli, they suggested, could increase this area more than five times. Unfortunately they were only able to estimate the total surface area of the macroscopic duct system (segmental ducts and up, excluding the smaller canaliculi), which means the real number could be larger by at least one factor of magnitude (the authors suggest 3,000 cm2 to be a reasonable guess). Luckily, we are spared a foray into mathematical modelling of canalicular surfaces, because as always with such statistics the number itself is basically meaningless to the reader, and nobody in their right mind would ever ask an exam question about it, nor would it ever be involved in any sort of clinical patient-care-related decision. All you need to know is that it's large.

One last aspect of the biliary canaliculi needs to be aired, which is not usually mentioned, but which definitely fits into the "functional anatomy" paradigm. These tiny channels are capable of peristalsis, of a sort. The countercurrent flow of bile (against the direction of blood flow in the sinusoid) had historically been ascribed to purely passive or osmotic mechanisms, i.e. bile flows because new bile secreted from the hepatocytes is always pushing the bile in front. However, there is now enough data to support the view of the hepatocytes as contractile (Trampert & Nathanson, 2018). Specifically, hepatocytes have a sub-apical network of actin which is activated by calcium, just like smooth muscle would be. This actin network can contract and produce peristaltic waves that propagate through the liver, which is probably the most important mechanism behind bile flow.

Canals of Hering need to be mentioned here as an aside, as they are short conduits connecting "proper" biliary canaliculi (lined by hepatocytes) to "proper" bile ductules (lined with cholangiocytes). They are unimaginatively furnished with a combination of hepatocytes and cholangiocytes, as befits a transition zone. Interestingly,  there are no transitional cells here, i.e. everything is very clearly either a hepatocyte or a cholangiocyte, and these channels are usually no longer than the length of one cell anyway, i.e. about 10-20 μm, which means this "transition zone" is a pretty abrupt boundary. We continue to name them after Ewald Hering, as alternative names have not been particularly inspiring  (Zwischenstücke, for instance, which basically means "intermediate piece" or "spacer").

Are they important? Does the CICM primary candidate, sweating on the packed train on the way to the exam, need to revise these details? Reader, they do not. Canals of Hering are to be recalled only in that impossible scenario where the functional anatomy of the biliary tree is asked about, and even in that case remembering that they exist will probably be enough. Apart from being short and lined with transitional cells, their only other distinguishing structural quality is that they remain within the hepatic lobule together with the canaliculi, whereas all the other biliary vessels are on the other side of the periportal limiting plate, i.e. in the portal tract.  Saxena et al (2004) have much more information about their significance, in case anybody is interested (for example, they may harbour intrahepatic stem cells, and they are the first part of the canaliculi to be damaged by various disease processes).

From the canals of Hering, the rest of the biliary tree takes the shape of a gradually widening series of hollow tubes, and mapping their anatomy is a fairly morose exercise that explains nothing about the way the biliary tree functions. A diagram from Ludwig (1998) could be helpful:

This raises the promising idea of simpler nomenclature (why don't we just number the generations?) but no, unfortunately, all of these tubes have names. This makes them an attractive target for the sort of people that write exams. Therefore:

This is probably more than is expected from CICM trainees, but if anybody has need of more information still, Crawford (2004) is an excellent reference. The casual reader will probably also enjoy Ludwig (1998), where the investigators used a serially sectioned paraffin block from a normal donor liver to create a 3D model of the biliary tree, thereby quantifying its dimensions. The larger ducts had a total volume of around 20 cm2, in case you need to know.

These cells are the main attraction here, as the tubes themselves are boring. These cells are a highly modified epithelial cell with numerous microvilli and one primary cilium per cell which seems to perform a mainly sensory role. The functions of cholangiocytes are numerous, and details of their specific role in the creation of bile is discussed elsewhere. In short, bile produced by hepatocytes needs to undergo several modifications on the way to the duodenum, and the cholangiocytes perform these modifications. Both secretion and absorption are required, and tight junctions are necessary to control the tubular luminal composition.  Regulation of this process is mainly by hormones that modify the intracellular concentration of cAMP, as increasing the concentration of intracellular cAMP results in the activation CFTR, the Cystic Fibrosis transmembrane conductance regulator. This thing is a chloride channel, and the resulting chloride efflux into the lumen of the bile duct gives enough chloride for the chloride/bicarbonate exchanger to then pump huge amounts of bicarbonate into the duct lumen, raising the pH to something like 8.0. At the same time, the increased osmolality of the tubular lumen attracts water through cholangiocyte aquaporin channels, which increases the volume of the secreted fluid.

Obviously, in order for all of this to work, paracrine and endocrine mediators need to be able to access the cholangiocytes, and the ducts need to be connected to the autonomic nervous system. Which brings us to:

Blood supply and innervation of the biliary tree

Bile ducts appear to be well innervated with sympathetic and parasympathetic fibres but these seem to mainly have some effect on cholangiocyte proliferation in developing and regenerating ducts. In the quiescent adult duct, the nervous system seems to be less important than the hormonal mediators. For example, Strazzabosco & Fabris (2008) remark that the transplanted liver, with its nervous system disconnected from the host, does not suffer any sort of major disturbance of biliary secretion.

Bile ducts down to the level of the interlobular ducts (but not the terminal cholangioles) are well supplied by the peribiliary vascular plexus (PBP), a meshwork of fine blood vessels. These originate from branches of the hepatic artery and drain into the hepatic sinusoids or portal vein.

Bile produced in the biliary tree is not released immediately. It ends up stored in the blind sack, about 40-50ml in volume. Banfield (1975) and Houssett (2016) describe it in the sort of detail that would not be valuable here, as gall bladder physiology is unlikely to ever form the core of a CICM First Part SAQ. Still, just in case, the following point-form list of factoids might be helpful:

The regulation of the storage, concentration and emptying of the gall bladder is discussed in greater detail in the chapter dealing with bile synthesis and secretion.

Steiner, Jan W., and John S. Carruthers. "Studies on the fine structure of the terminal branches of the biliary tree: I. The morphology of normal bile canaliculi, bile pre-ductules (ducts of Hering) and bile ductules." The American Journal of Pathology 38.6 (1961): 639.