On the concept of motor units

This chapter is most relevant to Section L1(v) from the 2017 CICM Primary Syllabus, which expects the exam candidates to be able to "explain the concept of motor units".  How this minor "L2" grade element ended up with a whole syllabus item all to itself is difficult to explain, considering that another item asks us to "describe the anatomy and physiology of skeletal, smooth, and cardiac muscle" and requires over 8,000 words to unpack. Still, here it is, and we must deal with it in some way, even though no past paper questions have ever been asked about it. There's quite a lot of material on this subject in the textbooks, depending on which textbook you read, and without having past paper questions as examples it is rather difficult to predict which details of motor unit physiology the CICM examiners might latch on to when writing their SAQs. Most likely the trainees will be asked to define the motor unit, explain its significance to the generation of force by a muscle fibre, or elaborate on how it is significant to critical care.

The reader will not be surprised to learn that there is no review article titled "what the concept of motor units is supposed to mean to an intensivist". The best single reference for last-minute revision would probably be this short free chapter from Neuroscience (2nd ed, 2001), or this review by Loeb & Ghez (2000), although the latter may extend too far into generic muscle physiology for the end-stage exam candidate who just needs immediate answers.

The definition of a "motor unit"

A motor unit is often described as: "the smallest functional unit of the nervous system; the final output of motor commands". It represents the "pixel" of neuromuscular activity:  the smallest increment of muscle power that our motor instruments can manifest, the fundamental limit of motor resolution. The origin of the concept is variably attributed to either Keith Lucas (1905) or George Mines (1913), both of whose papers start with a splendidly obsolete title convention ("On the summation of contractions" and "On the gradation of activity in a skeletal muscle-fibre"). In case the reader is wondering, this style was already a quaint anachronism even in the first decade of the 20th century, borrowing the credibility of authors writing in Latin who tended to start their work with "De", eg. "De Rerum Natura". In their defense, at least Lucas and Mines chose prose instead of dactylic hexamer. The basic premise of their experiments was to determine whether stimulus of a muscle results in a graded response, and to their surprise, they found steps in the response, i.e. the force of contraction ratchets up in graded increments rather in a smooth linear fashion. Moreover, the number of observed steps was smaller than the number of observed fibres. This could only mean one thing: that there were discrete bundles of skeletal muscle cells controlled together, and these bundles were activated one by one as the stimulus increased in magnitude.

The  precise definition of this concept evolved in parallel with the developments in measurement technology, a process characterised by the gradual addition of more and more neural components to the definition. When term "motor unit" was used  for the first time by Sherrington & Liddell in 1925, it had referred only to "motoneurone axon and its adjunct muscle fibres". Then later Sherrington added "the whole axon of the motoneuron from its hillock on the perikaryon down to its terminals in the muscle".  Later revisions annexed more and more of the motor neuron, to the point where the modern definition of a motor unit consists of:

In this fashion, it is possible to conceptualise the motor unit as a single push button that activates an n amount of newtons of force by causing a bundle of muscle fibres to contract. To play fortissimo, you press more buttons.

Anatomy of the motor unit

Motor units differ mainly according to the size of the muscle fibre group they innervate. Buchtal et al (1959) found that the size of the territory covered by a single motor unit varied by a factor of four within the same muscle. The fibres innervated by a single axon could be distributed across several fascicles, and each fascicle may contain the fibres of several motor units, but all the fibres tend to be co-located rather than being scattered across the entire muscle body. To look at a classical muscle (eg. the human biceps) in crossection, the territory of a motor unit would be a roughly cylindrical area about 5-10mm in diameter and 30-40mm in length.

Muscle fibres of the motor unit 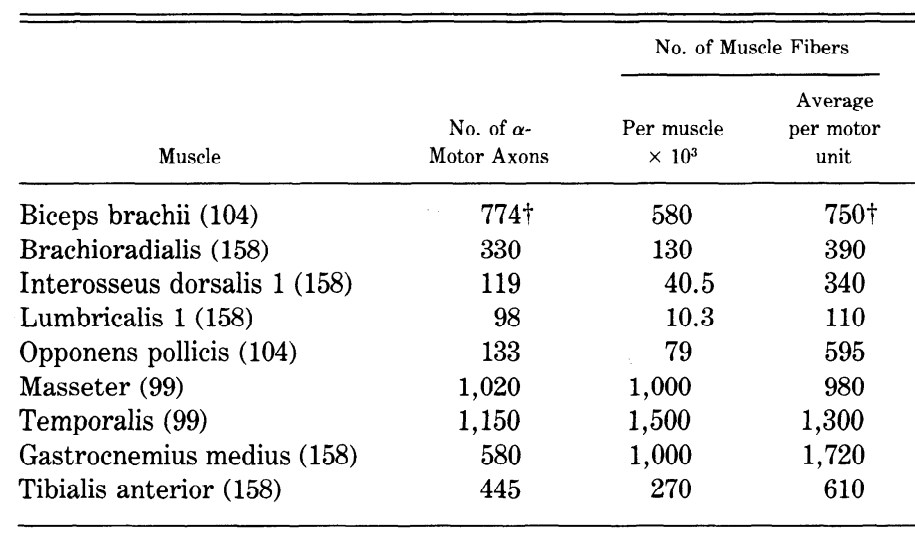 Axon of the motor unit

These are long myelinated projections of spinal alpha motor neurons, characterised by their thickness and the speed of their transmission. Extensive myelination makes their action potentials propagate using saltatory conduction, and their thickness (8-20 μm) decreases their axial resistance to the flow of current - all important factors that affect the rate of axonal conduction. The result is the fastest fibres in the body, with a speed of propagation often quoted to be in the range of 48-120 m/s (Brown, 2001). At their ends these axons branch into several endings and terminate as motor endplates, which are basically synapses where the postsynaptic membrane belongs to the muscle cell. To visualise this better, nothing helps more than a nice fluorescent Drosophila leg, such as this one from Venkatasubramanian et al (2019) where stained neon-green neurons delicately wrap around magenta myocytes. 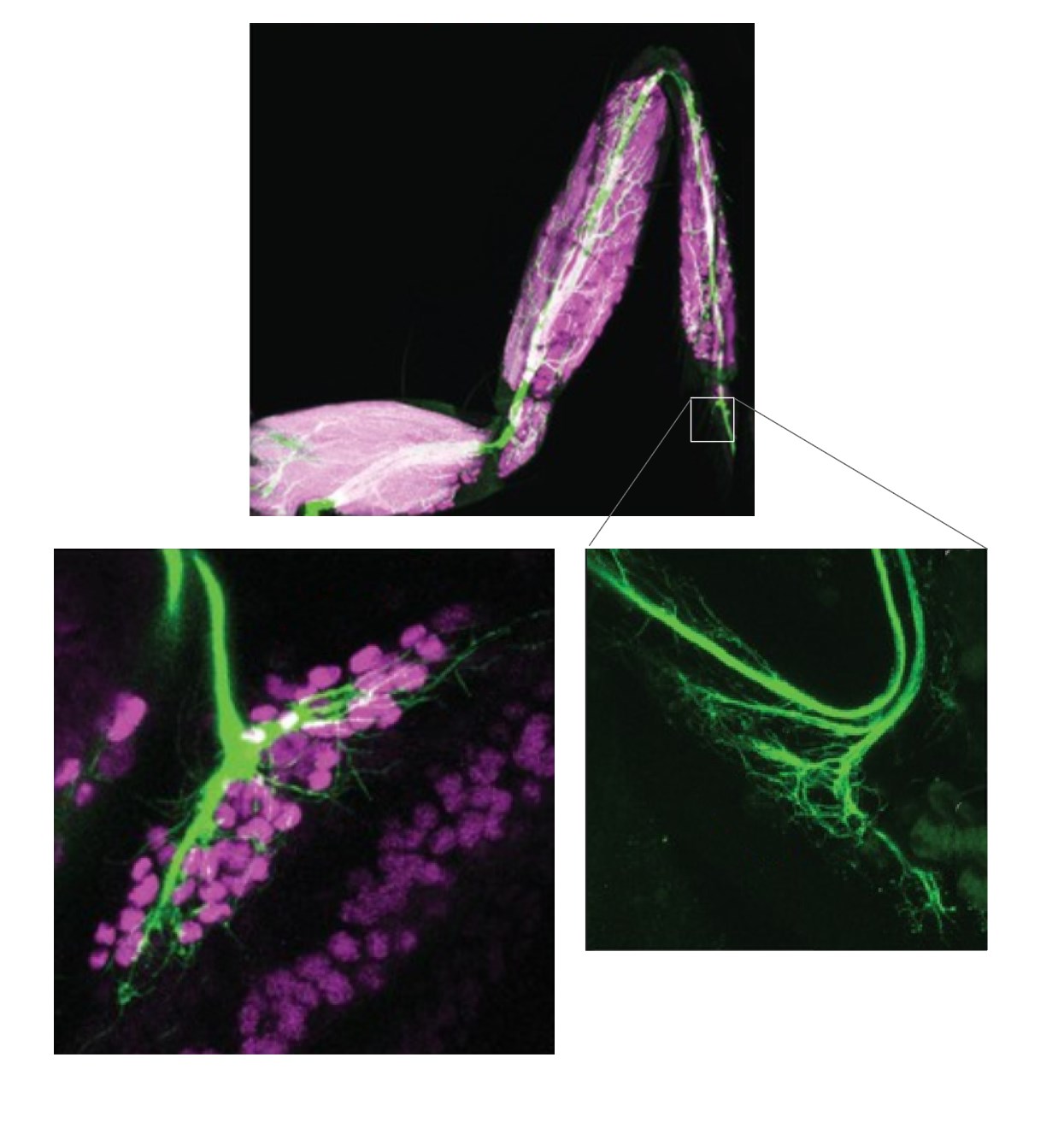 These axons emerge from the spinal cord via the ventral roots, and then travel as a part of peripheral nerves, often mingled with sensory afferents. Additionally these axons give branches within the spinal cord itself, so call "recurrent collaterals", that connect to inhibitory interneurons.

Alpha motor neurons live in the anterior horn of the spinal cord. When these are discussed in textbooks, for some reason they are usually described as the largest neurons in the spinal cord, as if the reader is expected to use this information to identify them after reading the material. To be fair, this is factual - they are huge -  and for this author to complain about the inclusion of irrelevant facts would be throwing rocks from a rather fragile glass house. Alpha motor neurons are stellate, manspreading across the cord with widely branching dendrites, which makes it challenging to measure them (from where to where?) but qualitatively the cell bodies look much larger than surrounding peers. Here, a 100 μm scale bar is put against a group of lumbar motor neurons from a neonatal rat, captured by Lindsay et al (1991): 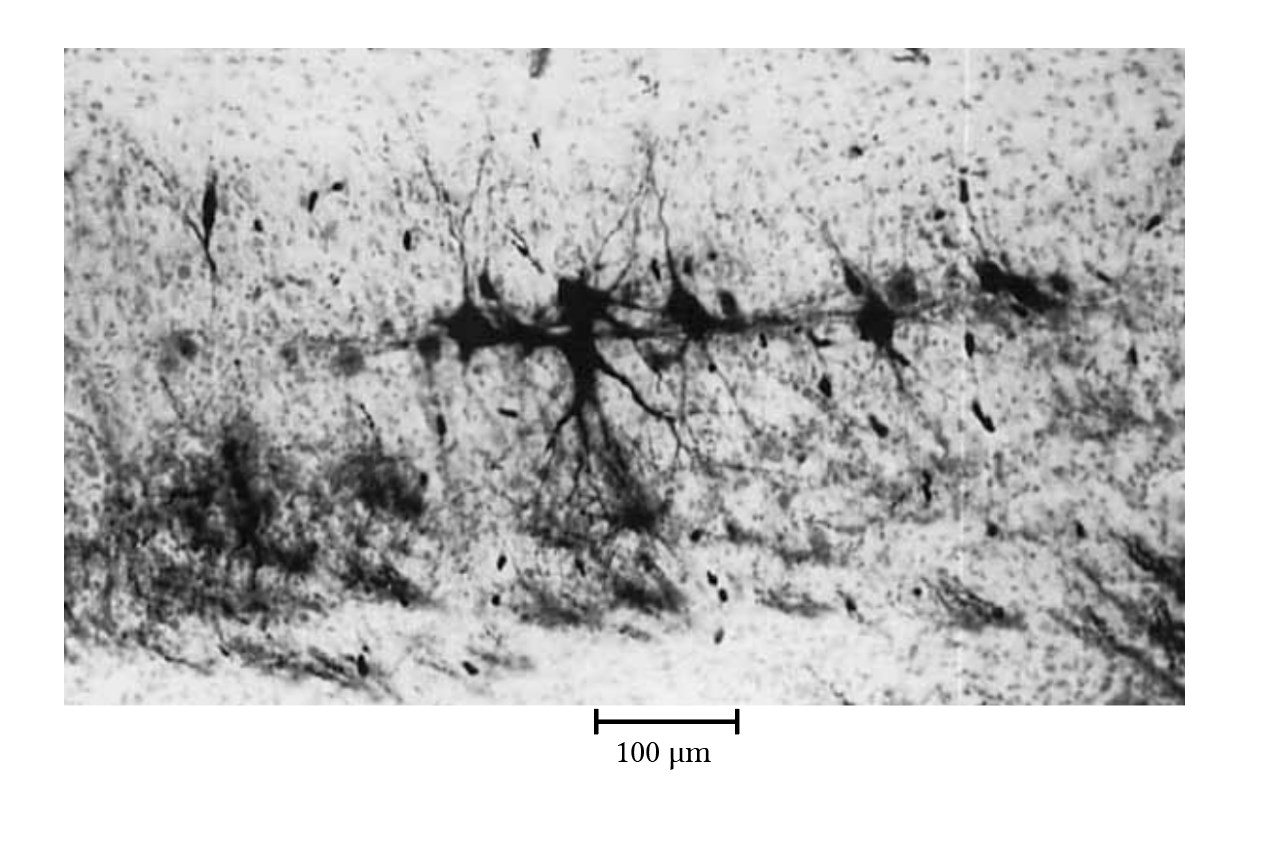 As you can see, the soma tends to be about 50 μm across. That's fairly sizeable for a single cell, considering erythrocytes generally span no more than 8-10 μm. Why are the alpha motor neurons so large? This question is probably too asinine for serious neuroscientists to contemplate, and the literature does not seem to contain direct answers, but the soma of these neurons certainly seems packed with large aggregates of rough endoplasmic reticulum (Nissl bodies) and a completely unreasonable amount of RNA, looking likethey are expected to perform some industrial-scale molecular synthesis. Edstrom (1956) found that they contains 500-1300 pg of RNA on average, whereas the normal amount for an average mammalian cell would be about 10-30 pg. This starts to make sense if you consider that the cell body of the alpha motor neuron neuron accounts for perhaps 0.001% of its total volume, with the rest being a huge long axon full of protein (and largely empty of nuclear material). All the protein to supply this massive cell body must therefore be created in the spinal cord and then shipped along axons to the extremities. Sato et al (1994) confirm this, as they found the degree of transcriptional activity seemed to correlate with motor neuron size.

Relevance of motor units to the intensivist

The reader could at this stage rightly demand to be shown the relevance of all this garbage to routine bedside practice. Quite right - it's hard to find - but with a little effort, we can try to see the useful elements here. There are two main benefits to knowing anything at all about the motor unit for the pragmatic intensivist: to answer exam questions about neuromuscular disorders, and to understand the process of recovery from critical illness.

The motor unit in the classification of neuromuscular disorders

You can use the motor unit as a way to structure your classification of the causes of weakness. There's an excellent example of this in Dhand (2006), some of which is reproduced here:

One should probably point out that this classification system is a helpful method of conceptualizing these disorders, but does little to help the process of diagnosis or treatment.

After your patient has recovered from their prolonged critical illness, as you rebuild their muscles back from jelly, the process of recovery produces muscles that are a lot less coordinated than what you had started with, and the reason for this involves motor units. Critical illness induced weakness often involves both neuropathy and myopathy. In neuropathy, degeration of axons tends to denervate some motor units, and subsequent healing of the damage does not restore all the axons back to their original numbers, which means the reinnervation of these nerveless muscle fibers occurs by collateral sprouting from the distal terminals of nearby healthy motor units. The end result is fewer motor units with more fibres per unit, and therefore reduced ability to perform precise movements.

In contrast, where myopathy is the dominant feature, the number of myocytes per motor unit decreases, but the number of axons should theoretically remain intact. The result is a reduced amplitude of motor activation per motor unit recruited, which can be detected by electromyography. In this fashion, using electromyography may make it possible to discern how much of the weakness is due to myopathy and how much is due to neuropathy (Friedrich et al,  2015). This, unfortunately, would likely have no effect on the management.

Sherrington, C. S., and E. G. T. Liddell. "Recruitment and some other factors of reflex inhibition." Proceedings of the Royal Society ofLondon, Series B. 1925.

Blum, Jacob A., and Aaron D. Gitler. "Singling out motor neurons in the age of single-cell transcriptomics." Trends in Genetics (2022).

Edstrom, J‐E. "The content and the concentration of ribonucleic acid in motor anterior horn cells from the rabbit." Journal of Neurochemistry 1.2 (1956): 159-165.