This brief chapter is relevant to the aims of Section K1(v) from the 2017 CICM Primary Syllabus, which asks the exam candidate to "describe the major sensory and motor pathways (including anatomy)". More specifically,  it is relevant to answering Question 15 from the second paper of 2011, which asked for "the motor and sensory pathways involved in withdrawing the lower limb from a painful stimulus". Sure, that might sound like a good excuse to discuss reflexes; but a person who read the question carefully might point out that there are numerous pathways involved here ("Aδ and C  fibres, spinal dorsal horn, spinothalamic, thalamic and cortical pathways", etc), and that the college examiners actually have a whole separate syllabus item dealing with monosynaptic reflex arcs in the musculoskeletal section.

Nonetheless, this is here. Without wasting any further time:

Textbooks tend to be the most common source of condensed information on reflexes, as the time for publishing review articles about them appears to have passed. We are now in an era when this information is so canonised that publishers no longer reference its original sources. Unfortunately that means one may actually have to pick up a textbook for this purpose. Fortunately, it also means one could pick up literally any textbook, as the same stuff is present in all of them (occasionally plagiarised verbatim). Alternatively, one could visit high quality free resources such as "Monosynaptic reflex" from StatPearls (Walkowski, 2021) or Hultborn (2006) for a historical perspective.

Definition of a reflex

The most basic way to define something we refer to as a "reflex" is to separate it from conscious cortical activity. Most dictionaries and medical textbooks tend to include the word "involuntary" in their definitions, such that the reader of several such resources would come to the conclusion that it is an essential defining characteristic. "An involuntary response to a stimulus" is as good a definition as any. This most important feature refers to the fact that reflexes are usually dealt with at a level of spinal bureaucracy that is well below the organs of awareness, and no conscious control of them is required.  A noxious stimulus occurs, is noticed by something sensitive, reported to a dumb automatic relay, converted into a stereotypical unplanned response, and executed before the upper levels of the administration ever become aware of it. Thus it closely resembles the way a HR complaint is handled in a major teaching hospital.

Thus, one method for systematically discussing reflexes would be:

This framework seems to be the preferred method of describing reflexes of any sort for the CICM fellowship exam, and even non-neurological homeostatic mechanisms can be forced into this mould.

Physiology of a simple reflex arc

The simplest possible reflex is a communication between two neurons, with only one synapse between them.

The simplest possible reflex described above is "monosynaptic" reflex, i.e. the neuron only have one synapse between them. In humans, this sort of arrangement is limited to the deep tendon reflexes, all other reflex arcs involving multiple neurons (i.e. being polysynaptic). Because of its simplicity and familiarity, this reflex arc (and particularly the knee jerk reflex) is often used to explain and illustrate reflex physiology.

In case one would enjoy watching a sinister bearded man torture an unconscious patient, this video by Peter Scaf gets to the reflexes at around 10:10, and seems to represent some sort of standard in the industry.

Though we have literally just defined the reflex as something which happens without any upper motor control, in fact the higher centres of the central nervous system exert an influence on the α-motor neurons. Most of this influence takes on an inhibitory form.

The sensitivity of the reflex arcs is adjusted in this way. The level of adjustment does not appear to have any real voluntary basis to it, but certainly the consciously perceived states of the CNS can affect it, and there are some mechanisms via which a person can consciously influence this descending inhibition. One example of this is the Jendrassik manoeuvre, where clenching one's teeth and pulling one’s hands apart with fingers held together tends to facilitate the knee jerk reflex. How this actually works remains unclear (Gregory et al, 2001). Similarly, the exaggeration of deep tendon reflexes associated with anxiety and fear is a well known phenomenon (eg. demonstrated by Davis et al, 2011, who used a fear of heights to exaggerate the reflexes of undergrads).

A lesion in the descending control pathways should therefore give rise to hyperreflexia. There is some support for this, insofar as we see hyperreflexia in patients with "upper motor neuron" lesions, but the mechanisms clearly must involve a lot of other factors (Yates et al, 2011, give a good list of them). For exam purposes, the loss of descending inhibition is a handy oversimplification which can be deployed  into an exam answer as some kind of distracting chaff.

The mechanism of clonus

Clonus is another demonstration of what might happen if this descending inhibition of reflex arcs is abolished. Specifically, this rhythmic contraction of stretched muscles is thought to arise from the loss of inhibitory regulation over spinal stretch reflex neurons. Interestingly, the rate of these rhythmic contractions is directly related to the distance between the spinal cord and the muscle that is getting stretched. Again, the precise mechanism has never been totally confirmed, and most likely there are multiple different mechanisms in play (Boyraz et al, 2015), particularly something where some sort of peripheral self-reexcitation is involved. How to handle this uncertainty without taking a deep dive into clonus research? When pushed, one could include clonus in a reflex-related exam answer by saying that it is a dysregulation of the normal muscle stretch reflex (which would be technically accurate).

If you are going to flex a muscle, the opposite muscles across the joint need to relax. This is called reciprocal innervation. It happens because of post-synaptic inhibition of motor neurons of the opposing muscles: 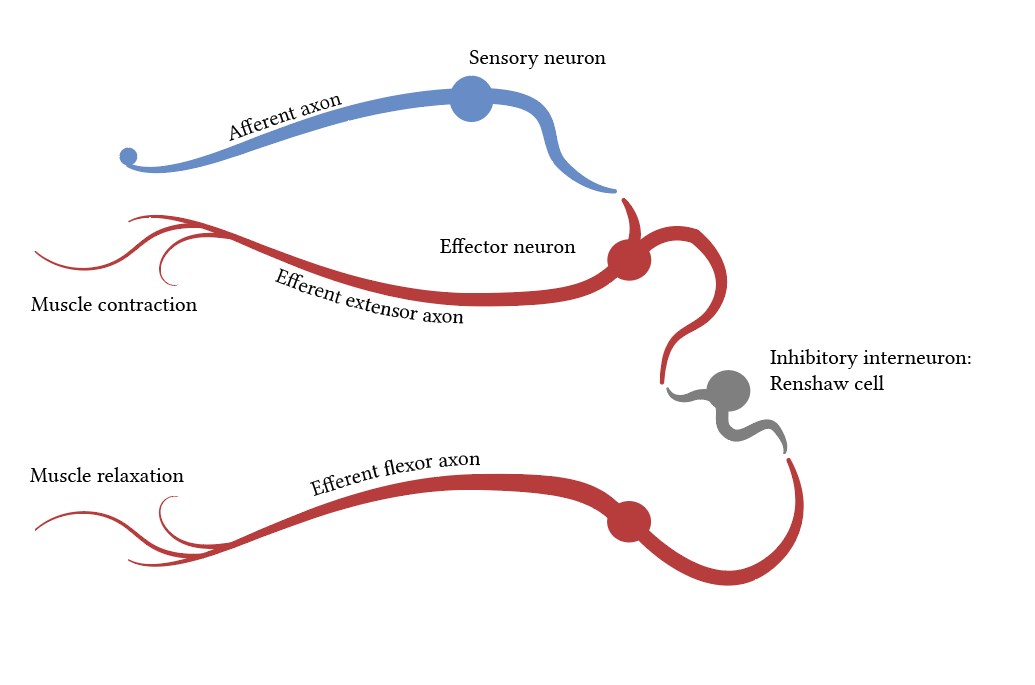 The arc which causes the inhibition of the flexor group is a polysynaptic reflex arc, i.e. there are two synapses involved. A collateral axon from the motor neuron passes to an interneuron in the spinal cord which inhibits the motor neuron of the antagonist muscle, or some variation on this. Most motor reflex arcs integrate some reciprocal innervation in this way, as it would be completely useless for your hamstrings to remain tonically flexed when your quads are trying to extend your knee in response to a patella tendon stretch. The "Renshaw cells" involved in this circuit use glycine as the main neurotransmitter.

Generally, just flailing a tendon hammer around will eventually hit the right spot and elicit the reflex, but the CICM examiner community seems to have a fixation of "correct technique", particularly those among the Second Part Examiners whose origin story includes some degree of physician training. If one is sufficiently unlucky, one may one day encounter an examiner who has strong views even about the choice of reflex hammer or how it is handled, for example reprimanding you for using the built-in pin for pain testing (it can spread infections, you know). Some of them will even express some kind of discomfort with well-accepted shortcuts in critical care neurology, such as the use of the plantar strike method to test the Achilles tendon reflex ("submaximal", they will say, even though actual experts agree that it does not matter how you do it).

The amplitude of the reflex is a somewhat subjective measurement, depending largely of the number of reflex tests performed by the clinician. And there is obviously a lot of interobserver variability. Absent reflexes are clearly agreed by everybody as unequivocally absent, but what is hyporeflexic or hyperreflexic or whatever "brisk" means can be a matter for debate, and multiple examiners may arrive at different conclusions from the exact same technique in the same patient. In the absence of widely accepted scoring systems, the safest way to describe one's findings would probably have to be a crude "are they up or are they down" binary system, i.e. am I detecting a lower motor lesion, an upper motor lesion, or is the reflex basically normal?

If anybody really needs to know their reflex testing to the level where they are able to have an argument about it with their senior colleagues, the best resource would have to be Stephen McGee's Examination of the Reflexes, Chapter 63 from Evidence-Based Physical Diagnosis (p.583-594 of the 4th edition). However, this clearly lies in the Second Part exam territory, as First Part candidates are probably not expected to actually examine the patients purposefully, being rather too busy typing ward round notes for their computer-illiterate intensivist.