This chapter tries to address Section K1(ii) of the 2017 CICM Primary Syllabus, which asks the exam candidates to "explain the factors affecting and control of intra-cranial pressure". Apart from the weird abuse of hyphenation, this is a perfectly reasonable expectation for ICU trainees, and probably serves a very important educational role to prepare them for a time when they must manipulate human physiology to defend cerebral perfusion. The importance of this topic is also reflected in CICM written exam questions, which are numerous:

Some of these questions (eg. Question 18 from the second paper of 2016) also ask for how ICP can be measured, for 20% of the mark and without any mention of what was expected in the college answer. Taking the view that this could not have been very important, instead of a deep dive into ICP monitor engineering, the reader is redirected to the Fellowship Exam resources, where methods of measuring and clinically assessing ICP are thoroughly dissected.

If you can get a hold of a copy of Cerebrospinal Fluid in Clinical Practice (2009), the fourth chapter ("Normal intracranial pressure physiology" by Gomes & Bhardwaj) maintains an excellent balance of detail and readability.

It might seem disingenuous to start with a definition for a concept which seems immediately intuitive and basic ("it's the pressure inside the cranium, innit") but the college seem to insist that a definition of ICP needs to be front and centre in most of their written exam answers. It does not help that none of the official college textbook choices offer a specific definition. There's also no international body of standards to guide nomenclature here, and so the reader is left to pick among a broad range of experts each of whom appears to have produced a minor variation on a common theme. Here is one representative version from Gomes & Bhardwaj (2009), made exceptional by nothing other than its appearance at the top of a search result:

"Intracranial pressure (ICP) is defined as the pressure within the craniospinal compartment, a closed system that comprises a fixed volume of neural tissue, blood, and cerebrospinal fluid (CSF)"

This version is attractive because of its one-liner simplicity and its direct relationship to the measurement of ICP, which inevitably comes up in any discussion of ICP. Of course, if simplicity is not your thing, Czosnyka & Pickard (2004) have you covered, with a definition that tries to integrate every possible contributing factor and tries to build a mathematical relationship between them:

ICPvascular is the contribution of blood pressure to the intracranial pressure, and which is "difficult to express quantitatively... ...probably derived from the pulsation of the cerebral blood volume detected and averaged by non-linear  mechanisms of regulation of cerebral blood volume", and

ICPCSF  is the pressure of the cerebrospinal fluid

And the pressure of the cerebrospinal fluid is in turn derived from Davidson's equation (Davidson, 1970), which describes the relationships between the main determinants of CSF pressure:

To restate this needlessly complicated set of relationships in the CICM primary exam would be pointless, particularly as none of these components can ever be measured individually in any practical way. The confused trainee is advised to ignore the last few paragraphs and to choose something short and memorable.

Named after Alexander Monro and George Kellie, the original 1783 phrasing of this relationship is representative of scholarly writing at the time, but entirely unsuitable for the modern trainee:

"For, as the substance of the brain, like that of the other solids of our body, is nearly incompressible, the quantity of blood within the head must be the same, or very nearly the same, at all times, whether in health or disease, in life or after death, those cases only excepted, in which water or other matter is effused or secreted from the blood-vessels; for in these, a quantity of blood equal in bulk to the effused matter, will be pressed out of the cranium."

The compartments being discussed are:

Basic physics suggests that, of these compartments, none are compressible - i.e. all of these compartments are some combination of incompressible fluid and incompressible solid, and all share a finite volume inside the skull. Now, this term "incompressible" is thrown around a lot when discussing the Monro-Kellie doctrine, and its wanton use might make one think that the cranium and its content is some kind of rock-like system, where any increase in volume will immediately lead to an infinite increase in pressure. Clearly that is not the case, as nobody's head explodes each time they sneeze or cough. The total intracranial system has a degree of elasticity to deforming influences, which is described by a characteristic compliance curve.

The compliance curve of the brain

Most textbooks, in their explanation of the relationship between intracranial pressure and intracranial content volume, will produce a curve that typically looks like this:

It genuinely looks as if to reproduce this barely labelled graph in an exam would be enough. Certainly, it contains all the important information that needs to be communicated: namely, that at a high intracranial volume, small volume increases will produce massive changes in the ICP.

As one might guess, this graph and all graphs like it are based on some experimental evidence, even though the original investigators rarely receive the credit of a reference in textbooks. The main reason these graphs are rarely labelled with axis scales is because the original data comes from dog studies by Löfgren et al (1973) and Avezaat et al (1979). Dog crania are clearly smaller and the volumes of fluid on these graphs will not be meaningful if you are accustomed to working with mainly adult humans, which means the scales can be removed from the graphs without losing much of their educational value. Still, here is the original from, slightly altered to highlight the important bit: 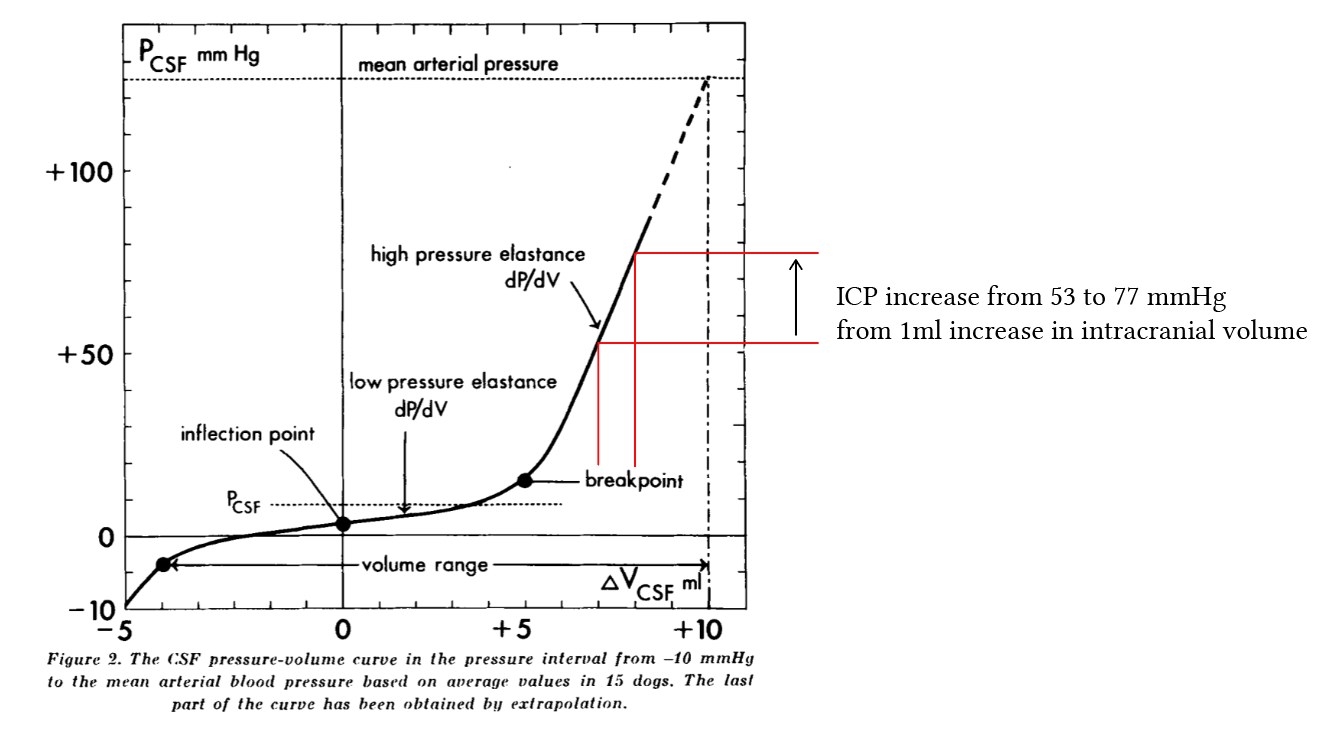 So: the elastance of the intracranial compartment jumps markedly (by a factor of 20) with a fairly trivial change in volume. The reason for the importance of this is that the relationship works both ways: you only need to remove a relatively trivial amount of CSF from the brain in order to make a tremendous difference in the ICP. This is seen at the bedside, looking after a brain injury patient with a swollen poorly compliant brain, when one drains what appears to be only a few drops of CSF from the patient's EVD and produces a substantial improvement in their cerebral perfusion pressure.

The flat part of this pressure/volume curve raises an interesting question. If the cranium is such a rigid box, and the contents is incompressible, what happens at the lower end of volumes, where the ICP is relatively stable over a relatively large change in volume? The reason that this curve is a curve and not some sort of rectangular brick wall is that there is a bit of flexibility in two of the three compartments. The CSF and the blood can move around a little bit, whereas the brain is a fixed incompressible presence within the skull. In short, there are four main elements to the response of the intracranial compartments to a change in ICP:

Thus, together, these mechanisms introduce enough flexibility into the ICP, such that it remains stable over the lower range of pressure fluctuations. The result is that trivial fleeting everyday changes in ICP can be ameliorated by rapid shifts in intracerebal venous volume and more sustained changes by slow adjustments to the rate of CSF reabsorption. So, with these control mechanisms in place, what is the scale of those "trivial fleeting everyday changes"?

The normal ICP, when you see it in textbooks, is usually quoted as 7-15 mmHg, or ≤13mmHg, or <20mmHg, probably reflecting the fact that normal healthy people usually don't have their intracranial pressure invasively monitored. When you can get them to consent to stuff like this, it usually involves minimally destructive approaches like lumbar puncture, from which the cerebral pressure can be estimated.

Also, considering the dependence of the ICP on venous drainage and hydrostatic pressure, this value must obviously vary considerably depending on where your head is in relation to your body. Petersen et al (2016), for example, did several posture experiments with a group of neurosurgical patients who were undergoing 24hours of continuous ICP monitoring as a part of their workup. It was 9 mmHg on average while the patients were supine. In a head-down position, it increased to 14-19 mmHg, and lying down with their heads lifted up to about 20º, the ICP dropped down to something like 3-4 mmHg.

From this, it should follow that in the completely upright person, the ICP should be very negative, well below zero.  That is what would probably happen if the jugular veins did not collapse almost completely in the upright position. Petersen et al reports "formation of a separate hydrostatic gradient with reference to the base of the skull", which is likely the spot where atmospheric pressure collapses the jugular veins for much of the respiratory cycle. In the upright patients with ventricular drains, these investigators recorded an ICP of between -2 and +2. No data explains this more effectively then the original diagram from the Petersen article, which plots ICP against the angle of head elevation. 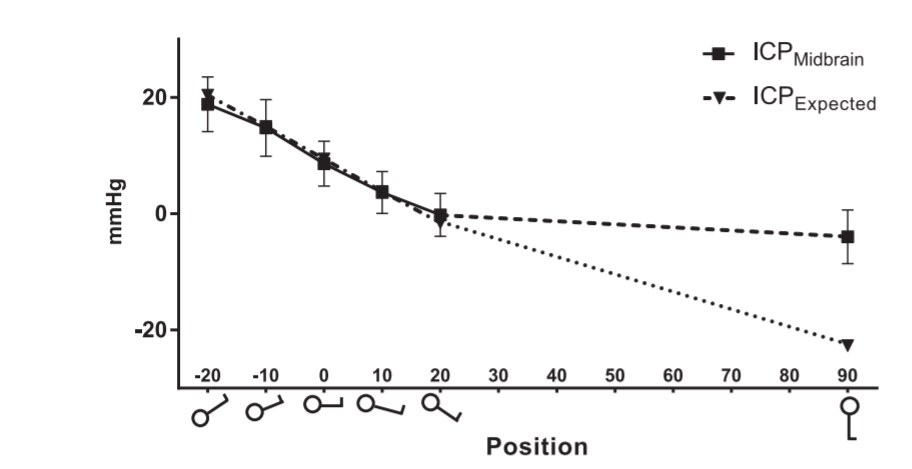 Apart from posture, there are multiple other reasons (perfectly natural, beautiful reasons) as to why a person's ICP might fluctuate in the course of their normal life, or in pathological states.

"Most candidates had all the information but had difficulty synthesising the information to write a
cohesive answer",
the examiners complained in their answer to Question 18 from the second paper of 2016, implying that they were specifically looking for a particular structure or format which they did not mention in the question stem. This is a great example of an exam question designed to generate poor performance even in candidates who are armed with all the relevant knowledge. To prevent the occurrence of any further such comments from the examiners, a structures approach is taken here, focusing on arranging the information rather than the information itself.

"CSF production and absorption" was listed as one of the desirable parts of a "good" answer in the college comments to Question 6(p.2) from the first paper of 2010. Because CSF receives an abundance of attention elsewhere, the mechanisms of its secretion will be mentioned here in only the most abbreviated way:

Mechanism of action of drugs used to control ICP

From the list of factors above, one can easily construct a table to describe the substances we use to decrease the intracranial pressure therapeutically. This was the specific topic of Question 10(p.2) from the first paper of 2009, and it has never been repeated since in the First Part exam. Instead, this sort of thing has migrated into the Second Part written papers, and is treated much more thoroughly there, in the chapters on the management of raised ICP and osmotherapy for TBI. For the purposes of this chapter, a model exam answer will suffice to make quick revision easier.