By Alex Yartsev - Jul 25, 2021
Last updated Sun, 07/25/2021 - 05:57
Topic: Nervous system
All SAQs related to this topic
All vivas related to this topic
This chapter is relevant to the aims of Section K2(i) from the 2017 CICM Primary Syllabus, which expects the exam candidate to demonstrate an "understanding of the pharmacology of sedating drugs". Midazolam is one of the most important representatives of this group, a standard part of the critical care toolkit, and as much a foundation of our civilization as soap and good manners. Historical exam questions involving midazolam have consisted of mainly "compare and contrast" works, as follows:

"Midazolam" by Dundee et al (1984) remains an excellent resource for this topic, even though it is at least ten years older than any of the current crop of exam candidates. Its age is nothing to turn your nose up to, as midazolam has remained midazolam during this time, and new pharmacokinetic principles have not magically sprouted since the 1980s. It also has the distinction of being free to read. For a more modern alternative, the reader can turn to Okkola & Ahonen (2008), which also compares it to some of the other benzodiazepines.

Midazolam is a benzodiazepine. This whole class of drugs are basically the product of a series of hideous animal torture experiments from the 1960s, when Sternbach and his buddies at Hoffman-La Roche got a hold of a bunch of different aminoketones with fused benzene and diazepine rings, and then substituted random side groups into them until their experimental cats stopped reacting to electrical shocks. Midazolam was the subject of the eighty-fourth paper on these experiments, if you need an estimate of the number of cats they must have gone through. It appeared on the scene in 1977, interestingly the same year that propofol became commercially available. Its chemical relatives are diazepam, lorazepam, oxazepam, and everyotherazepam you can think of.

One chemical difference that distinguishes it from the others is its pH-dependent solubility. Midazolam presents as a hydrochloride salt in an acidic buffered solution with a pH of around 3.0, and it has excellent solubility at that pH. because the diazepine ring is opened and the molecule is polar. As soon as  it is injected and the pH increases, the ring closes, and midazolam becomes readily lipid soluble, just in time to cross the blood-brain barrier. Here, a figure from Gerecke (1983) illustrates its reversible ring opening in the presence of abundant protons: 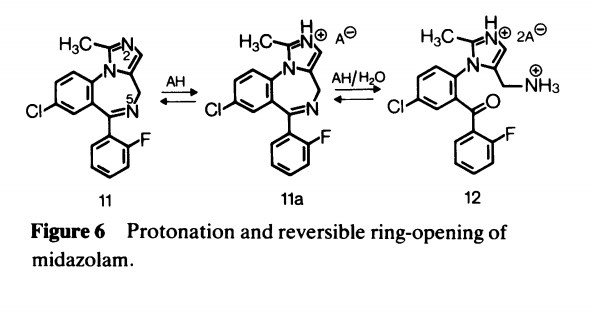 Apart from neat carbon chemistry tricks, the pharmacokinetics of midazolam are fairly unremarkable, insofar as it resembles almost every other CNS-active agent.

The pharmacodynamics of midazolam are representative of the pharmacodynamics of its class, or at least it tends to be used as the archetypal benzodiazepine representative when GABA agonist mechanisms are discussed in the literature. Of that literature, Möhler et al (2002) and Griffin et al (2013) are some of the better examples. To save the reader some time, all benzodiazepines act as allosteric modulators of the activity of the GABAA receptor, a ligand-gated chloride channel (and they have no affinity for the metabotropic GABAB receptors). By binding to a  pocket created by the α and γ subunits of the pentameric GABAA receptors, benzodiazepines changes the channel morphology in a way which increases its affinity for GABA, and increases the frequency of its opening. This pocket is exactly the same place where nonbenzodiazepine "Z-drugs" bind, and distinct from the binding site of barbiturates (which increase the duration of opening instead). In either case, increased GABAA receptor activity leads the neuron down the final common pathway of all sedatives, where the excess of intracellular chloride  makes the membrane hyperpolarised.

Sedation, obviously, is the clinical effect of midazolam. Occasionally, a CICM exam answer will call for something more thoughtful and detailed. Obviously it has some special characteristics. For example, one might have noticed one's senior colleagues using midazolam instead of propofol or other agents to maintain sedation in haemodynamically unstable patients. Okkola & Ahonen (2008) turned out to be a goldmine for this material.