By Alex Yartsev - Aug 02, 2021
Last updated Mon, 08/02/2021 - 05:29
Topic: Nervous system
All SAQs related to this topic
All vivas related to this topic
This chapter is relevant to the aims of Section K2(i) from the 2017 CICM Primary Syllabus, which expects the exam candidate to "understand the pharmacology of anti-convulsant drugs". Of these, the most well-trodden path leads to phenytoin, as it has been the most popular for exam questions. It has a host of highly attractive features for the pharmacology educator, such as nonlinear elimination kinetics, various dangerous toxic effects, a narrow therapeutic index and erratic pH-dependent absorption (the same qualities which make it an unattractive drug to use clinically). Like virtually all pharmacology questions, those about phenytoin have generally asked the candidates to compare it to some other drug, usually levitiracetam which has none of these interesting properties. These past paper questions have consisted of the following:

Additionally, phenytoin somehow snuck into the CICM Fellowship exam, where Question 17 from the first paper of 2013 asks a surprising amount of detail about it.

There is no better paper about phenytoin than the dated 1983 article by Jones et al. It works because it is incredibly detailed, and because our understanding of its mysterious effects has not moved past "something about sodium channels" over the subsequent forty years. Unfortunately, it cannot be recommended to the pre-exam candidate, because it is 52 pages long and moreover not available for free. Gupta's Phenytoin for StatPearls is free, shorter, newer, and infinitely more useful because its point-form brevity is a kindness for the reader.

Phenytoin is the accepted common name for 5,5-diphenylhydantoin. Textbooks refer to this drug as a hydantoin derivative, and this is how trainees should describe in written exam answers, but it could just as easily be classified alongside barbiturates (in fact Heinrich Biltz discovered it in 1908 in the process of trying to find new barbiturate derivatives). "Borrowing" this chemical structure series from Bialer (2012) helps the reader visualise the genealogy of phenytoin among the many daughter molecules of phenobarbital: 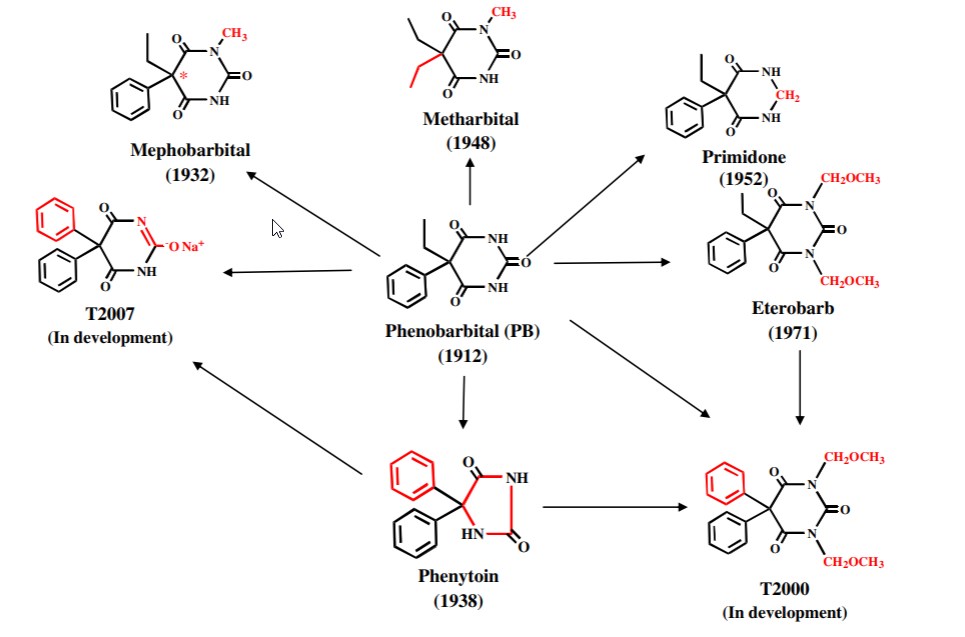 To call it a "hydantoin", of course, would still be completely correct. Hydantoin itself is a pharmacologically unrelated compound consisting of a five-carbon ring, and "hydantoins" is the family name given to molecules that vary this basic theme by adding various sidechains. Phenytoin adds two phenyl rings to the hydantoin base at the 5 position (hence pheny-toin). There aren't many other hydantoin drugs in modern use;  there's really just phenytoin, fosphenytoin (a water-soluble prodrug), and dantrolene, which has no antiepileptic properties. There was also 5-ethyl-5-phenylhydantoin, a fairly unpleasant sedative anticonvulsant that was marketed in the 1920s under the ambitious trade name Nirvanol®. Nirvanol and its prodrug mephenytoin fell out of popularity because phenytoin was slightly less toxic, but the name "Nirvanol" was clearly viewed as having great marketing potential, and it has subsequently been adopted into use by a Pakistani brand of olanzapine and some kind of herbo-bullshitological "natural mood accelerator".

The pharmacokinetic properties of phenytoin are probably the most important reason for including it in CICM pharmacology questions. The main point of interest is its saturable elimination, which leads to nonlinear elimination kinetics - a favourite subject for viva writers. But, for completeness, let's go through everything. The best resource for this material was an old 1983 paper by Jones et al, which is unfortunately not available for free. The threadbare exam candidate can still benefit from the contents of this article, as they are presented here in an easily digested state. Unless otherwise stated, the measurements quoted in the rest of this pharmacokinetics section come from that paper.

Depending on what book you read, the pKa of phenytoin is reported as somewhere around 8.0-9.2. It is a weak acid and has poor water solubility, requiring a highly alkaline environment to become properly soluble. As an example, this NZ data sheet reports sodium hydroxide as one of the excipients for the injectable formulation of phenytoin, which brings the pH up to 12. Phenytoin is highly protein bound (90%), mainly to albumin but also to all sorts of other tissue protein and lipids, which gives it a volume of distribution of something like 1.6 to 2.5 L/kg.

The protein binding is of interest because we often monitor phenytoin levels, and the result which returns from the lab is the total  level, i.e. the analyser reports both the free and bound fractions of the drug. In a scenario where albumin is low (i.e. everybody in the ICU), a normal-looking total drug level may actually represent a relative overdose because the free fraction would be increased. Lindow & Wijdics (1994) produced cases describing nontrivial toxicity (we're talking cerebellar signs, coma, etc) in ICU patients with classical ICU-like levels of albumin (eg. 10-20g/L).

Phenytoin can be administered as an intravenous infusion, or it can be given orally, and there is little difference in the dosing. Eneteric absorption is very erratic, even though this is a drug which - being very lipophilic - should have no trouble penetrating lipid bilayers. Unfortunately, the highly acid pH of the stomach and the relatively tame alkalinity of the duodenum makes it impossible for the drug to dissolve to any appreciable degree, and so the amount of free drug available to actually cross the stomach wall would be erratic and dependent on the prevailing randomness of gastric acid-base balance. Fortunately, the pH is more alkaline in the intestine, and even though this still leaves a large proportion of the drug in an unionised nonsoluble state, the surface area there is sufficiently large for a decent amount of absorption to take place. Irrespective of these mitigating factors, there will always be a degree of individual variability in any pharmacokinetic studies, and the published bioavailability of phenytoin ends up being reported as anything between 50% and 90% (Gugler eta al, 1976).

The metabolism of phenytoin is complicated by its dependence on CYP450 enzymes (i.e. susceptible to various drug interactions) and by its tendency to produce breakdown products with unpleasant chemical properties. The primary metabolic byproduct is the inactive hydroxyphenytoin (p-HPPH), which is then glucuronidated and excreted into urine - but along the way it can also produce a series of catechol oxidation products that can bind to proteins covalently and modify their function. The first hydroxylation step of this metabolic pathway is also easily saturable, which gives rise to interesting elimination kinetics.

The topic of phenytoin metabolism and elimination is sexy because it integrates both first-order and zero-order elimination kinetics, as the point of metabolic enzyme saturation is reached at a plasma phenytoin concentration which is right in the middle of the therapeutic range. Before reaching this point, phenytoin elimination is concentration-dependent, but once the enzymes are saturated the rate of elimination becomes static (i.e. a fixed amount of drug is cleared per unit time). This makes for a characteristic hyperbola-shaped dose/concentration curve, when the steady state concentration is plotted against daily drug dose (whereas linear elimination kinetics would be, erm, linear). There are a variety of these curves around in textbooks, but they are all a variation on the same theme, and all of them loom something like this one from Richens & Dunlop (1975), which helpfully draws the margins of a therapeutic plasma concentration range. The clinical significance of this should be immediately apparent from the threatening steepness of the concentration curve, as it ascends into toxic territory with increasingly smaller and smaller dose increments. For this reason, drug level monitoring is an essential part of therapy.

Phenytoin has several characteristics which make it an attractive candidate for loading dose administration:

In short, it is important to administer a large enough amount of it upfront so that the patient's sodium channels are well-blocked from the very beginning of their treatment. A dose of 15-20mg/kg is usually used, which ends up being about 1g for most normal sized people, and which is approximately 2-3 times the regular dose.

The primary drug target for phenytoin is thought to be the voltage-gated sodium channels in the central nervous system. This belief is based on the knowledge that it blocks sodium flux in lobster axons, and on the observation that it can act as a fairly successful Class Ib antiarrhythmic agent. In case you are interested, or for some reason compelled to use it in this way, Atkinson & Davison (1974) report that the effective range for its cardiac effect is approximately the same as the effective range for its anticonvulsant effects  (30-80 µmol/L, or  10-18 μg/ml by their 1970s notation). By stabilising the sodium channel in its inactive state, this drug shortens cardiac action potentials and prolongs the cardiac myocyte refractory period.

Apart from this classical effect, Tunnicliff et al (1996) describes a whole host of other supposed mechanisms, such as various membrane-stabilising effects of stimulating Na+/K+ ATPase, some kind of ill-defined calcium flux blockade, interference with NMDA receptors and decreased closing of the GABA chloride channel (this drug, after all, has barbiturate genes). This level of detail would probably be unnecessary for the CICM exam. Sodium channel blockade was the only molecular mechanism mentioned in the college answer to Question 2 from the first paper of 2010, and all the other SAQs had barely two sentences of commentary, which suggests that the trainees time would be better spent on studying something else.

Well, it sure helps in epilepsy. The sodium blocking effects are said to affect the faster firing neurons most, and there appears to be some sort of preference for the motor cortex. On this basis phenytoin is indicated for the treatment of tonic-clonic and generalised seizures. Phenytoin also has a host of non-antiepileptic effects which examiners enjoy exploring. One might be able to split these into ones which occur with acute overdose, ones which occur with prolonged use, and random stuff which happens to unsuspecting patients completely out of the blue.

Toxicity with chronic use:

Weird idiosyncratic complications of phenytoin use (one could hardly call them "toxicities", as they occur at normal concentrations and completely at random) include: