This chapter tries to address Section K3(i) of the 2017 CICM Primary Syllabus, which expects the exam candidate to "describe the physiology of pain, including peripheral nociception, conduction, mediators and pathways, spinal cord modulation, central processing of pain, changes in the older patient". The need to spell out the exact steps in a pain pathway has come up several times, which makes it something of a priority. For example:

In summary, the path of transmission for nociceptive information from peripheral nerves is as follows:

In terms of something to read from the world of official literature, Almeida et al (2003) is by far the easiest recommendation. Additionally, Todd (2010) offers a good description of what happens at the level of the dorsal horn.

After the terminal nociceptor is stimulated, it transduces the stimulus into an action potential which then propagates up the peripheral pain fibre. These fibres can be classified in a number of different ways:

There are two main types of fibre here, with distinct roles to play:

The cell bodies for these sensory neurons are in the dorsal root ganglion. The action potential travels past this ganglion and enters the spinal cord via the dorsal root.

Sensory nerve fibres travel up or down the spinal cord via the tract of Lissauer before synapsing with the dorsal horn neurons. Most of these primary afferents secrete glutamate as their main neurotransmitter. The precise position of these afferent fibres is carefully laid out into a laminar architecture, which is occasionally referred to as the laminae of Rexed because they were first described by Brer Rexed in 1952. The original drawings were actually somewhat underwhelming and so here is a much better image from Todd (2010) which illustrates that each subtype of fibre has a discrete destination in this layered structure: 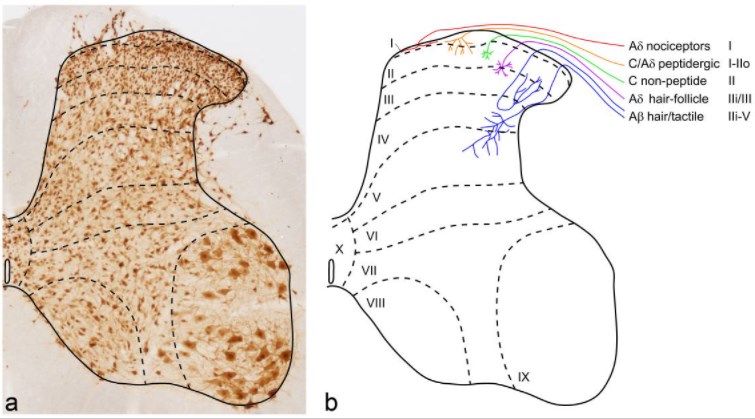 In case you don;t have time to read the entirety of the original Rexed paper or its modern successors (eg. Harding et al, 2020), this organisation (layer and what terminates there) can be summarised as follows:

The college answer to Question 12 from the second paper of 2019 also calls for "a description of the various substances involved in pain" including substance P, and so this would be as good a time as any to mention this curious neuropeptide. In short, Substance P specifically seems to be present at every level of the pain signalling pathways, where it acts as a neurotransmitter and a neuromodulator. Snijdelaar et al (2012) describes it in some detail, which is to say in way too much detail for an ICU exam candidate. To summarise:

At the dorsal horn, a layer of filtering and processing is applied. The dorsal horn grey matter is full of excitatory and inhibitory (glutamate and GABA) interneurons which can amplify or dampen the signal before passing it to higher CNS structures. Moreover, there are descending tracts that add central regulation. Todd (2010) mentions three systems which send their descending projections to the dorsal horn:

The inhibitory interneurons use GABA or glycine as their neurotransmitter, and receive descending input from these higher CNS systems. It is thought that their function forms the basis of central sensitization and "pain gating" that are discussed elsewhere.

Dorsal horn neurons  send projections across midline to the contralateral spinal cord, where their fibres form the ascending spinothalamic tract. To borrow an image from the chapter on major white matter tracts, here's an illustration of this structure: 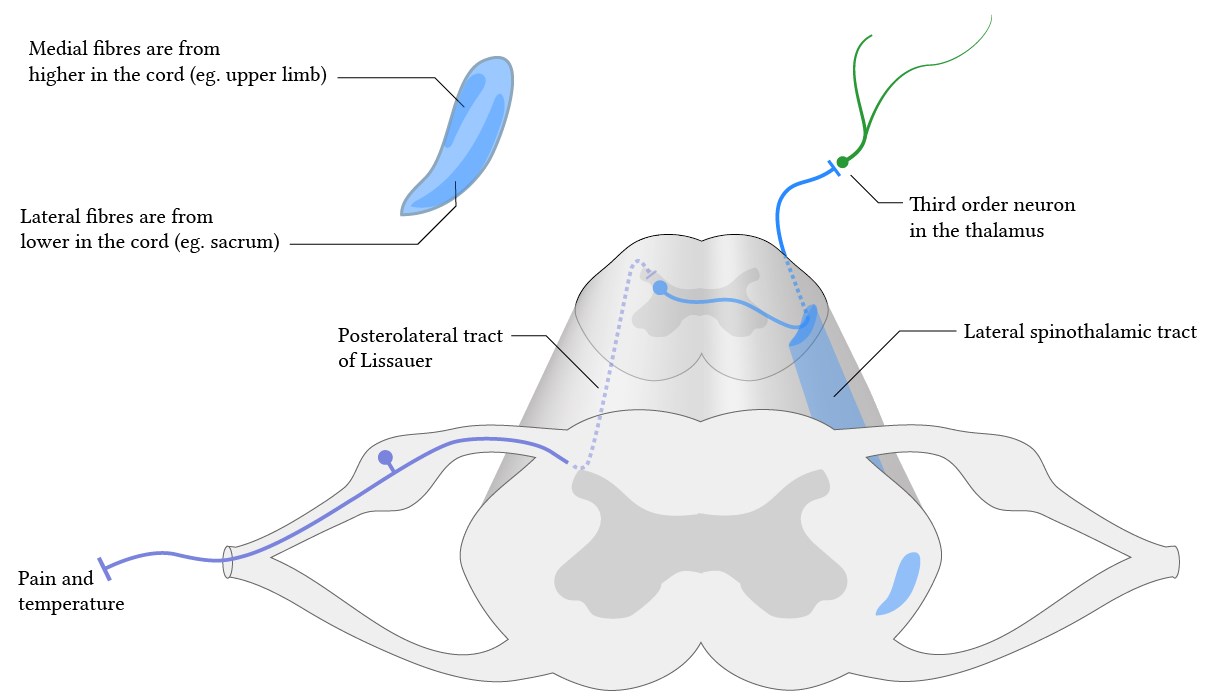 Though the thalamus is singled out in this diagram, in fact dorsal horn neurons send ascending projections all over the place, most notably to: