This chapter tries to address Section K2(ii) of the 2017 CICM Primary Syllabus, which expects the exam candidate to demonstrate an "understanding of the pharmacology of local anaesthetic drugs, including their toxicity". And "including their toxicity" is all the examiners seem to have been interested, judging by the content of the questions. This one-track mentality seems odd, as toxicology has mostly migrated to the Second Part exam, and moreover none of the past paper questions seemed particularly concerned with the management of the toxidrome -only the clinical features and risk factors. Here's a list of those questions, such as they are:

Becker & Reed (2012) or  are good resources for this section, and both available for free in one way or another. Tezlaff (2000) is not free, but is particularly useful, especially for structure-activity relationships. For some unknown reason, the entirety of Finucane's  Complications of regional anesthesia (2006) is available for free from some kind soul, and the local anaesthetic toxicity chapter there is pure gold.

Chemistry and classification of local anaesthetics

Local anaesthetics are generally classified according to their biochemistry. Normally, this might be a terrible idea for other drugs (because you would not be able to guess their properties just from the chemistry alone), but local anaesthetics generally have a fairly close relationship between their structure and their function. Most of the time they are divided into just two groups, the esters and the amides:

They are all variations on the same molecular theme. There are also pharmacodynamically related agents which also act as local anaesthetics by blocking sodium channels, but which have completely different molecular structure, eg. tetrodotoxin.

There are three main components to a local anaesthetic. Here's a molecule of lignocaine to illustrate. CICM trainees should not feel compelled to memorise this molecule, as it is unlikely that anybody will ever be asked to reproduce it. 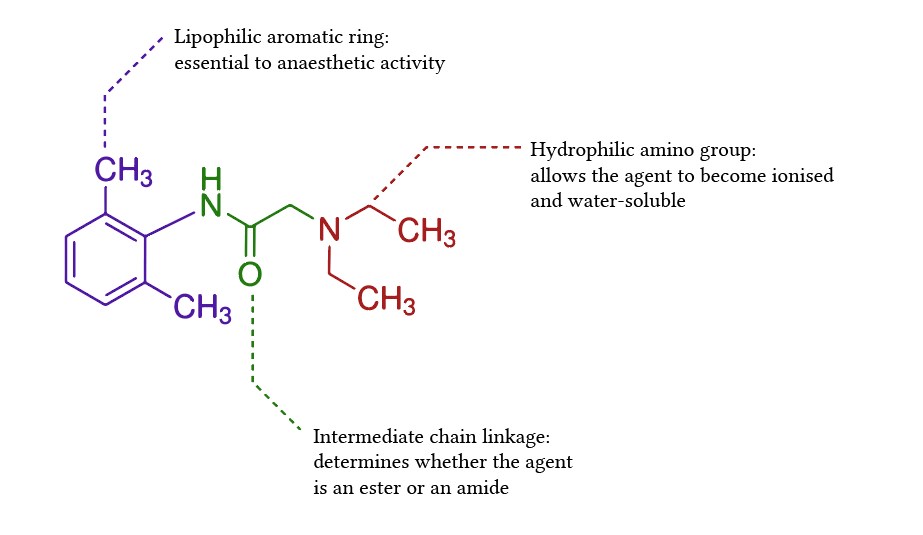 A little about the significance of these structural elements:

At this stage, an anaesthetic pharmacology textbook would usually bring out a table of properties which might look something like this: 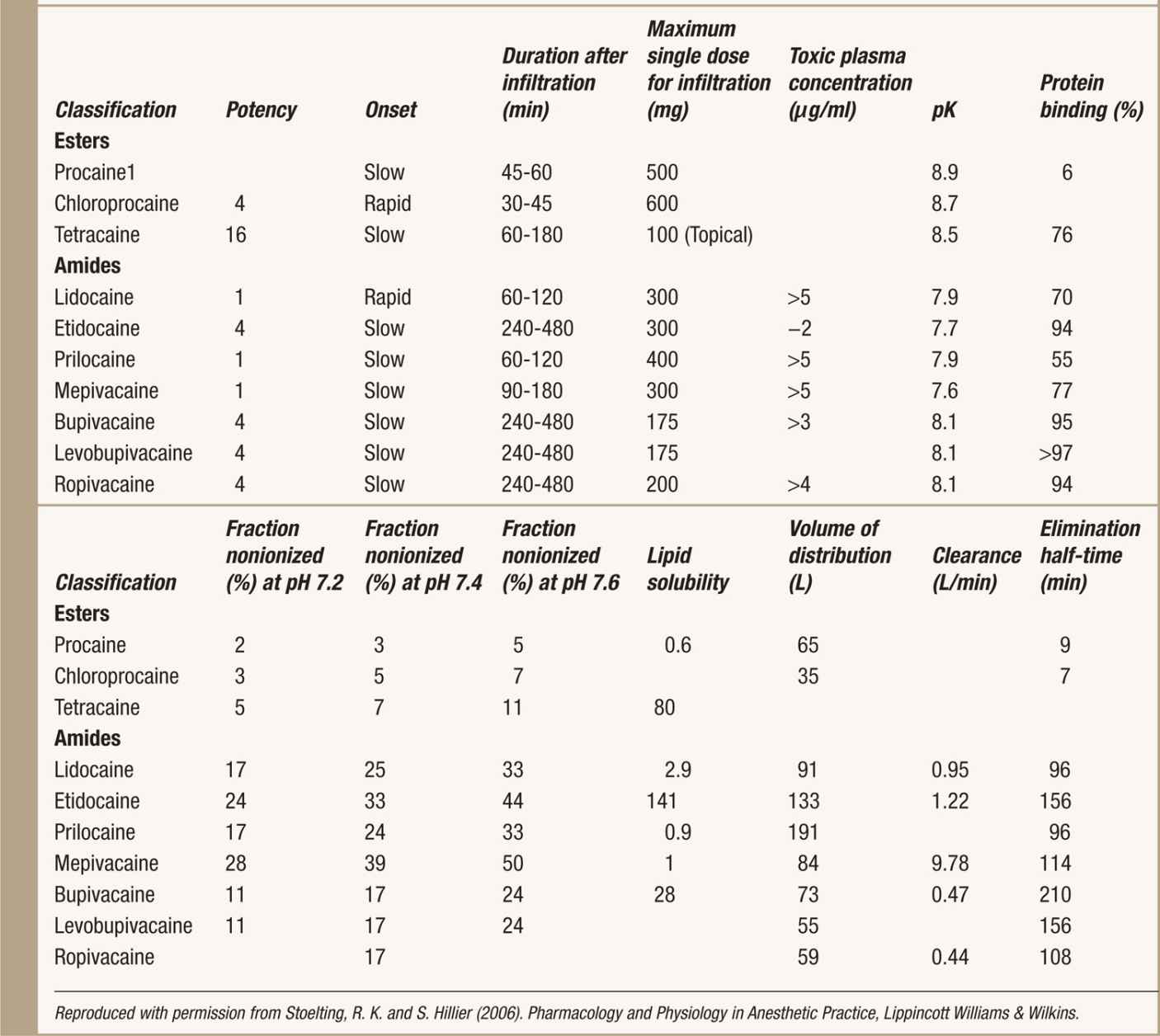 That one's from Stoelting via aneskey.com, but this monstrosity is ubiquitous, and clearly viewed as a rite of passage in some sense, because it must appear in anaesthesia exams with frightening regularity. The problem is so serious that resources originating from the trainees themselves recommend that this table be committed to memory by rote, as if an anaesthetist who can effortlessly recall the protein binding percentage of prilocaine is somehow superior to one who might have to Google it over fifteen seconds. Thus far, it appears that CICM trainees are spared from this, and so the ensuing discussion will focus on important concepts rather than unimportant numbers.

Local anaesthetics can be administered by a variety of routes. Apart from directly injection into the tissue to be anaesthetised, they can be given subcutaneously, intravenously, topically, intraocularly, intrathecally, and as nebuliser. That is a conservative list. If you can think of an orifice, mucosal surface or body cavity, local anaesthetic has probably been applied to it at some point.

Of course, oral absorption is an absolutely pointless area of discussion for exam purposes, as that is not how these drugs are administered, and it would not be something the examiners are interested in. Absorption into the neuron is what's important here, and this is a property determined by the solubility and lipophilicity of these agents. However, it is probably important to point out that people have tried to administer them orally, mainly for antiarrhythmic reasons, and were not completely unsuccessful. For example, Parkinson et al (1970) fed healthy volunteers oral doses of 500mg lignocaine, and demonstrated that this achieved levels comparable with an infusion of about 1.5-2mg/kg/hr, with a bioavailability of around 35%. It is hard to know what to do with this information, as it does not sound like a substance you'd be wanting to be discharging people home with.

There is probably no clearer way to put this than the way it has been worded in Brandis (2011), but let's try anyway:

From this, it should be clear that lipid solubility is the main determinant of potency. If a local anaesthetic agent is more lipid-soluble, a larger proportion of its molecules will make their way into the cell, and produce a clinical effect. Lipid solubility also affects the local distribution and sequestration of local anaesthetic. By soaking into the myelin, the drug is protected from getting washed away by the circulatory system, and the duration of effect is therefore longer.

Local anaesthetic agents are generally highly protein-bound. Intravenous lignocaine, for example, is about 70% protein-bound (it binds to both albumin and α1 acid glycoprotein).  Bupivacaine and ropivacaine are both >95% protein-bound. The protein-binding also has implications for regional effects, which will be longer if a large cache of drug forms in the tissue proteins instead of washing away into the bloodstream.

With the extensive protein-binding and lipophilicity, these are not drugs you'd expect to be meekly confined to body water. However, for the majority of them, the apparent volume of distribution is rather modest, something like 0.9L/kg for lignocaine and 2.7L/kg for prilocaine (the largest).

Amides are metabolised in the liver, and some of them have active metabolites (eg. lignocaine). For many of these, half life is quite prolonged, especially if they were injected into a protected space (eg. the thecal sack). On the other hand, ester local anaesthetic agents undergo rapid hydrolysis by plasma pseudoesterases, and usually have extremely short half-lives. Exactly how short? For some reason, this is very inconsistent across the published literature, and a surprisingly broad range is given for this variable, even though you'd think there would be an objective right or wrong answer to this question. For example according to Stoelting the elimination half-life of prilocaine is 9 minutes, but Tetzlaff (2000) reports it as 20 seconds. Both can't possibly be correct, but it is impossible to determine who is wrong, because the literature gives an impossible and inconsistent spectrum of values. All that can safely be said is that esters are metabolised rapidly and do not rely on the liver or kidneys for their clearance.

Local anaesthetics specifically bind to the intracellular domain of voltage-gated sodium channels, when they are in their open state. Though it is usually not mentioned in textbooks, one needs to also know that these drugs happily block other ion channels as well (potassium, calcium, etc), and the exact relevance of this remains the subject of debate. The best free article on the details of this turned out to be Scholz (2002). In summary, it is better to stick to sodium channels in the exam answer, as our understanding of local anaesthetic effect on other ion traffic is still incomplete.

For the sodium channel, the active site is inside the channel pore. Once there, the local anaesthetic blocks the channel by stabilising its inactivated state. This has several concentration-dependent effects:

Local anaesthetics selectively produce insensitivity to pain and temperature, block autonomic neurotransmission at normal doses, and only produce a motor block with very high concentrations. This selectivity for anaesthetic effects and sympathetic nervous system effects is called "differential block", and there does not seem to be any consensus as to how it works. Most honest textbooks will confess that "the reason for this differential blockade is unclear and many theories exist with some clinical correlation" (Gerner, 2011). Occasionally, one might find some reference to the fact that the thinner C-fibres which are responsible for polymodal nociceptive neurotransmission and sympathetic signals are also the ones with the least chemical barrier for diffusion, and so would be affected at lower concentrations then thicker A-fibres. Moreover, one needs to hit a much longer span of an A-fibre, as one really needs to anaesthetise at least two or three Nodes of Ranvier - otherwise an action potential may leap over the blocked segment of nerve. Though plausible-sounding, this theory does not always stand up to experimental scrutiny (for example, Franz & Perry, 1973, found that the relationship of myelination and prilocaine effect was pretty inconsistent). There's clear differences between drugs, and bupivacaine is said to be the agent with the greatest specificity for sensory fibres.

The magnitude of local anaesthetic effect depends on the frequency with which the nerve fibre is stimulated.  When Strichartz (1973) exposed frog sciatic nerves to lignocaine, he found that the magnitude of the first few depolarisations had relatively little effect, but with sustained stimulation the sodium currents progressively diminished in their magnitude. This suggested that the drug required an open sodium channel to function, i.e. that the receptor binding site was somewhere inside the pore and the channel needed to be open for the drugs to be able to access this binding site. The more the channels open, the more they get blocked. This use-dependent phenomenon is also occasionally referred to as phasic block. According to Butterwoth & Strichartz (1990), phasic block is a fairly individual property of specific agents, with some dissociating quite rapidly out of the pore, and others staying put for longer.

Strichartz, Gary. "Molecular mechanisms of nerve block by local anesthetics." The Journal of the American Society of Anesthesiologists 45.4 (1976): 421-441.

Strichartz, Gary R. "The inhibition of sodium currents in myelinated nerve by quaternary derivatives of lidocaine." Journal of General Physiology 62.1 (1973): 37-57.

Franz, Donald N., and Roger S. Perry. "Mechanisms for differential block among single myelinated and non‐myelinated axons by procaine." The Journal of physiology 236.1 (1974): 193-210.

Zink, Wolfgang, and Bernhard M. Graf. "The toxicity of local anesthetics: the place of ropivacaine and levobupivacaine." Current Opinion in Anesthesiology 21.5 (2008): 645-650.

Ladd, Leigh A., et al. "Effects of CNS site-directed carotid arterial infusions of bupivacaine, levobupivacaine, and ropivacaine in sheep." The Journal of the American Society of Anesthesiologists 97.2 (2002): 418-428.

Nancarrow, C., et al. "The influence of acidosis on the distribution of lidocaine and bupivacaine into the myocardium and brain of the sheep." Anesthesia and analgesia 66.10 (1987): 925-935.

Avery, Pamela, et al. "The influence of serum potassium on the cerebral and cardiac toxicity of bupivacaine and lidocaine." Anesthesiology 61.2 (1984): 134-138.