This chapter tries to address Section K4(iii) of the 2017 CICM Primary Syllabus, which expects the exam candidate to "describe the pharmacology of Nonsteroidal anti-inflammatory drugs as a class". To be asked about them as a class is not something were have seen in CICM exam papers, but they certainly seem to trot out ibuprofen now and then, as for example here:

Free articles which treat the reader's time with respect include Bacchi et al (2012)  and  Rao & Knaus (2008), in the sense that they are short and to the point. Especially useful is the COX enzyme section from Rao & Knaus. They fall short in the department of pharmacokinetics; those articles are for some reason all paywalled, and you'd have to pay Elsevier for Day (1988) or Springer-Verlag for Verbeeck et al (1983).

NSAIDs can be classified in two main ways, and probably the best is a classification system based on their COX inhibition activity, as this immediately tells you something about their performance and side effects. Thus:

Or, you could classify them according to their structure, which has massive chemistry nerd energy but tells you absolutely nothing about the drug or its expected performance in the field:

Even the minimally attentive reader will realise that the latter classification system integrates a lot more drugs than the former, for various reasons but mainly because many of the drugs do not fit neatly into the COX matrix, and some are grouped along with the nonsteroidal anti-inflammatories even though they themselves may have absolutely no intrinsic antiinflammatory activity (looking at you, paracetamol). In short, neither system is perfect. Fortunately, the ICU trainee is only likely to encounter a small selection of these substances clinically, and their properties are sufficiently similar that they can actually be discussed en masse as a class rather than individual drugs. That will be the objective for the rest of this chapter, picking a few of the usual suspects as illustrative examples.

The ADME of NSAIDs is rather milquetoast in the sense that there is nothing there to really attract a person trying to create exam questions, if the task they put to themselves was "let's see if we can interrogate the candidate's understanding of basic pharmacokinetic principles". The drugs are well behaved and their pharmacokinetic profiles are free from any weird metabolic shenanigans. Observe:

Administration is almost uniformly oral, in the sense that these drugs are marketed to users in the community rather than hospitals and intensive care units, but parenteral formulations (eg. parecoxib, paracetamol) are available. According to Irvine et al (2018), there does not appear to be any major challenges with creating parenteral options, other than extremely poor water solubility (and since when has that stopped anybody). The same properties that make it difficult to dissolve them in water make it easier to combine them with a waxy/oily carrier and offer them as a suppository.

Absorption is almost uniformly good. NSAIDs are weak acids that are lipid-soluble, which means that they will be non-ionised under most of the conditions available in the upper gastrointestinal tract, and should be completely absorbed.

Bioavailability is largely excellent - hepatic metabolism of these drugs is relatively sluggish, and most of the dose will be able to make it into the bloodstream unmolested.

Distribution differs across the class. Volumes of distribution are fairly diverse, ranging from 0.1L/kg for ibuprofen

to 5-6L/kg for celecoxib. This property seems to vary depending on the affinity of these NSAIDs for plasma proteins: ibuprofen commits rather firmly and completely to binding albumin, whereas others may promiscuously bond with other tissue proteins. All of them are highly protein-bound (well, the only black sheep of the class here is paracetamol, which is only 15-20% protein-bound, but it's not a "real" NSAID anyway, so that does not count). This has toxicological implications: there's only so much protein to go around, and a massive overdose will result in the saturation of binding sites. In such a scenario, the increase in the free fraction of the NSAID will make more molecules available to do harm. It will also expose more of these free molecules to the mechanisms of renal clearance, as well as to dialysis. Moreover, when one does a drug level (for example, in the case of salicylate, which has a widely available plasma assay), the total level ends up being rather meaningless, as it does not reveal the magnitude of the free fraction and will therefore be totally unrelated to the magnitude of clinical toxicity.

Metabolism is largely hepatic for all of these agents, with a few notable features. Most NSAIDs undergo extensive hepatic metabolism and are completely biotransformed into water-soluble metabolites. The unusual are:

Paracetamol also deserves a special mention here, as its metabolism is mainly by glucuronidation and sulfation (~70%), with a minor pathway that becomes important in overdose when the other enzymes are saturated. This side-pathway via the CYPE21 system produces NAPQI, a toxic byproduct that needs to be conjugated with glutathione in order to make it into something benign.

Clearance of inactive metabolites is boring and renal. Only with massive overdose do we ever get to consider things like urinary ion trapping, where the weakly acidic NSAID may be purposefully made more water-soluble by alkalinising the urine (thus preventing it from returning into the circulation). Normally,  none of this plays any role. The enterohepatic recirculation of diclofenac may also make it susceptible to multi-dose charcoal, as it decreases the amount of drug available for reabsorption.

Half-life is polarised between older and newer agents. Old drugs like ibuprofen diclofenac and paracetamol have very short half lives (with a much longer duration of effect due to their COX-inhibiting effects). Newer agents like celecoxib and valdecoxib have longer elimination half-lives, allowing for once-daily dosing in the case of the latter. In the event that anybody anywhere requires a longer list of half-lives with more detail, this one from Day et al (1983) could be of use, even though it omits the 'coxibs (as they weren't invented yet). Fortunately, there's really no reason to learn any of this, as the plasma half-life is completely unrelated to the drug's half-life in the compartment of interest (say, the synovial fluid). Moreover, it has no relationship to the duration of their binding to their molecular target, or to the decreased levels of inflammatory mediators which result from their primary mechanism of action. Which brings us to:

Inhibition of cyclooxygenase enzymes is the defining pharmacokinetic characteristic for these drugs, and their selectivity for its various isoforms can be used to classify them.  Fitzpatrick et al (2004) and Hawkey (2001) are a couple of  good overviews of what these enzymes do, in case anybody is interested in more detail than what follows:

In summary, the specific analgesia which results from the use of NSAIDs is a mainly peripheral action (that's one of the reasons one can achieve a similar amount of relief by taking a diclofenac tablet and by smearing oneself with a diclofenac ointment). To paraphrase Cashman (1996),

To be different, and also to highlight how it really does not fit into this chapter, paracetamol does not really affect peripheral cyclooxygenase function in any major way "Unclear and multiple" or "complex and yet to be determined" is how professional articles explain its mechanism of action. The uncertainty is sufficiently blank that CICM examiners commented positively on it in their response to Question 1 from the second paper of 2017, suggesting that it would be important for trainees to admit we have no idea how paracetamol works. Sharma & Mehta (2014) offered a series of best guess theories, including "effects on prostaglandin production, and on serotonergic, opioid, nitric oxide (NO), and cannabinoid pathways".

Spectrum of COX selectivity among NSAIDs

No piece of writing about the NSAIDs would be complete without a bar graph of COX selectivity, ranking agents from most selective to least selective. Here's a good one from Warner & Mitchell (2004), rotated slightly for convenience. 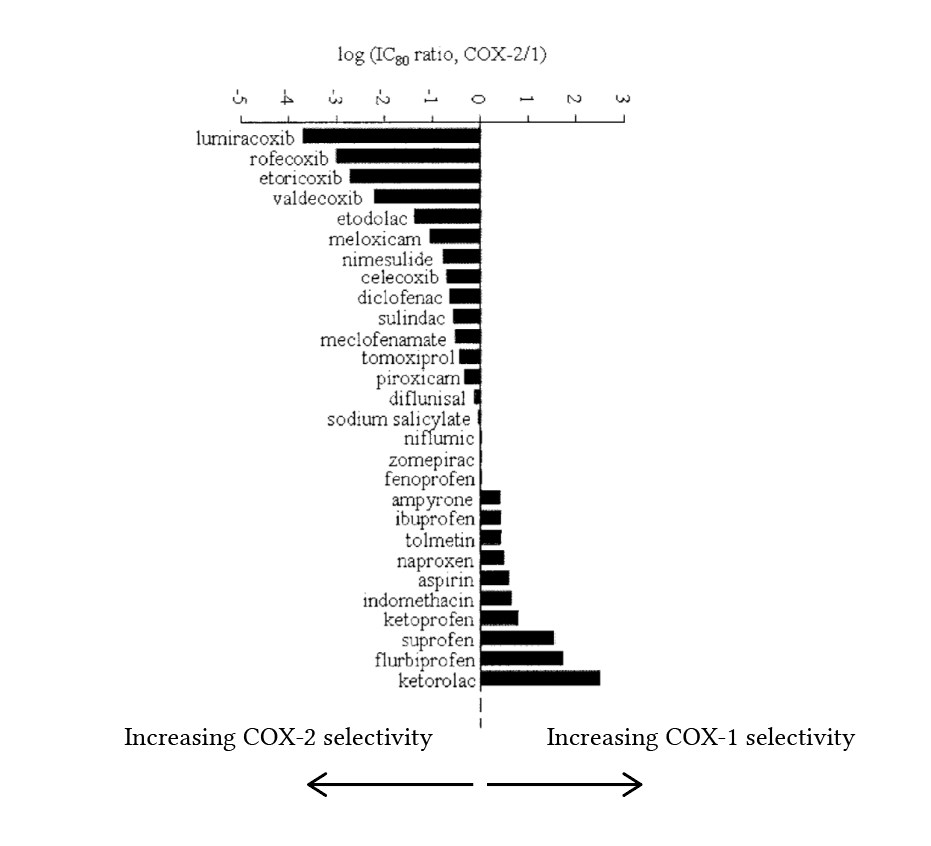 One sees this thing a lot, which might give one the impression that it is somehow meaningful, but in fact it is only a fairly vague guide to the expected analgesic properties of these drugs, as many other factors need to be taken into consideration (eg. their penetration to the site of anti-inflammatory activity). However this does bring up the topic of side effects, and these are probably more relevant to COX selectivity.

A great resource for this specific topic is Wongrakpanich et al (2018), which focuses mainly on the NSAID side effect profile among the elderly, but to be fair a) the side effects in the young are not much different, and b) most of our patients are elderly.

Wongrakpanich, Supakanya, et al. "A comprehensive review of non-steroidal anti-inflammatory drug use in the elderly." Aging and disease 9.1 (2018): 143.