This chapter tries to address Section K4(ii) of the 2017 CICM Primary Syllabus, which expects the exam candidate to "describe the pharmacology of opiates as a class". There's also a bit of Section K3(iii) here, where we "describe the physiology of opioid and NMDA receptors". NMDA receptors are covered well enough in the Ode de Ketamine, so this chapter deals with opiates exclusively. A vast number of questions in the past exam papers have asked for either a comparison of two opiates, or a discussion of their antagonists, or for some detail about them as a class:

It's another one of those situations where one really does not need to make specific recommendations regarding published peer-reviewed material because the Google Scholar search for "opioids" produces a dozen articles titled "Opioids". If a reader needed a curated selection of literature, a good starting point would be Inturrisi (2002) for "classical" opioids and Armenian et al (2018) for fentanyl and novel synthetic analogs.  For the reader with institutional access to Springer-Verlag, the best recommendation would have to be Crow et al (2021), a chapter from Pasqual & Gaulton's  Opioid use in Critical Care (2021), or the chapter on opioids by Zöllner & Stein from the Handbook of Experimental Pharmacology (2006). Both of them combine the thoroughness of a textbook with the fastidious referencing of a scholarly thesis, but be warned: that bibliography section is a powerful rabbit hole generator.

Opium, from ὄπιον  ("milk of the poppy"), is not a chemical term but a colloquial one, to describe a "spontaneously coagulated latex which exudes when the partly ripened capsules of Papaver somniferum L. are lanced on the living plant" (Dunnicliff, 1937). This raw natural plant ingredient seems to have disappeared from the chemist's shelves at some point in the early 20th century. Its main ingredient, in case anyone is interested, was morphine - it was 10-15% morphine by weight, as well as, codeine (1%–3%), noscapine (4%–8%), papaverine (1%–3%), and thebaine (1%–2%). The morphine Hauptbestandteil was isolated and named by Friedrich Wilhelm Sertürner who consumed some uncontrolled quantity of it in 1817. "When he awoke hours later, he realised that this compound was safe for human consumption", knowingly nodded Krishnamurti & Rao (2016).

In fact, though raw opium in its original form was no longer available, its presence in pharmaceuticals remained very popular, and it remained on the list of ingredients in many off-the-shelf products in pharmacies. The graph below (from Anderson & Berridge, 2000) is remarkable mainly by the tail of it, where even by 1998 the number of "official" preparations containing opium was still not zero. 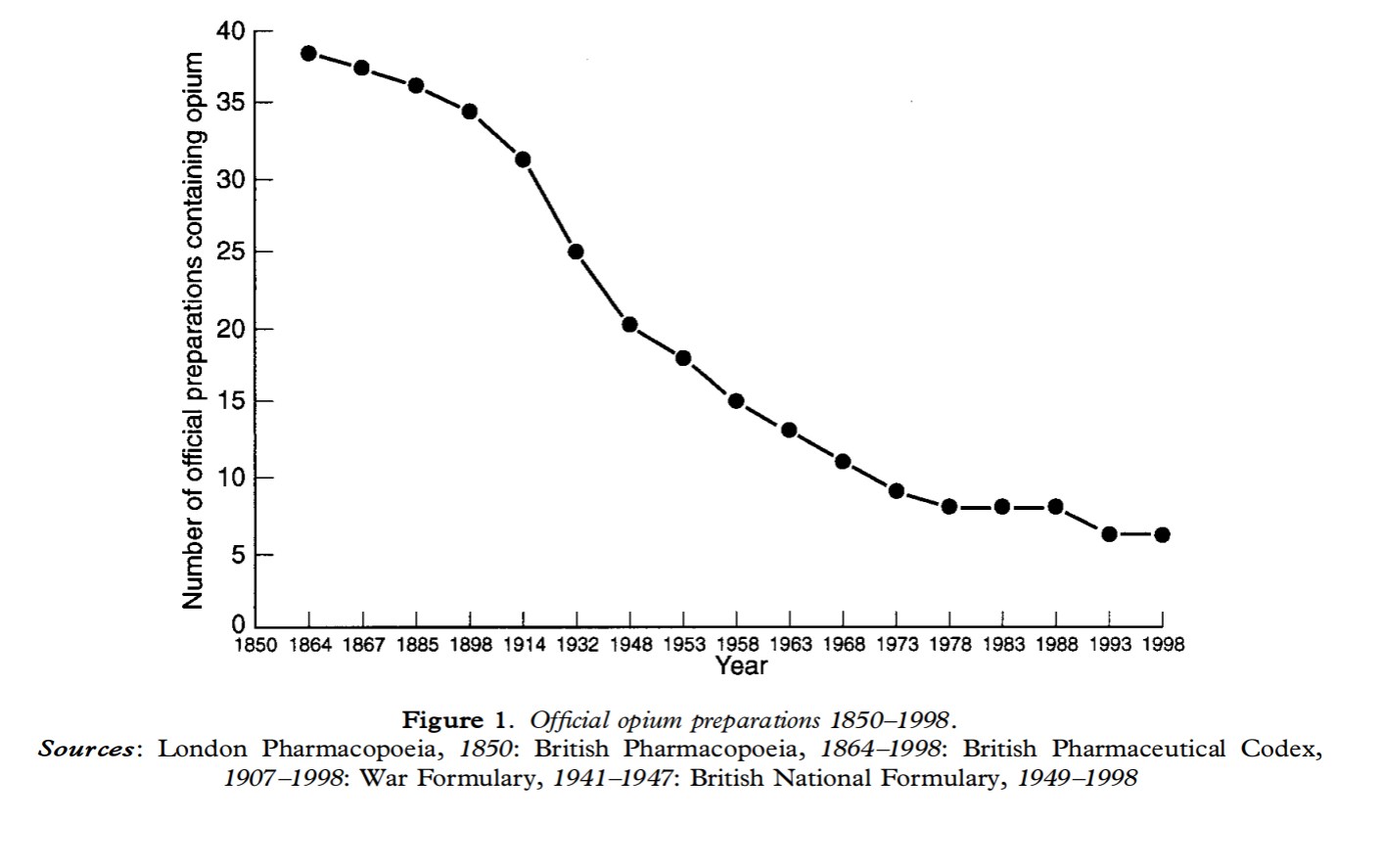 Thus, pharmacists and doctors all seem to have had some unhealthy attachment (call it an addiction?) to this substance, which to some extent explains the popularity of the name root in etymology. It does also help that the word "opiates" itself has some strong bohemian energy, whereas "natural phenanthrene and benzylisoquinoline alkaloids" does not. Thus, official terminology holds that:

"Opiates are drugs derived directly from opium (e.g. morphine, codeine, and heroin); while opioids are a broad class of opiate analogues that have morphine-like activity (e.g. methadone)."

This seems like an attempt to classify these substances by their origin; as most morphine manufactured worldwide is still made from poppy plants (though they are no longer delicately lanced and milked - in this cyberpunk dystopia of the 21st century, some kind of brutal machine mechanically separates them and turns them into a fibrous pulp from which the raw drug is extracted by the ton). This brings us to:

Classification of opiates and opioids

Like with anything complex and subtle in medicine, there is a handful of ways of doing the same thing, and none of them is considered definitive or correct. Thus, there are multiple ways to classify opioid receptor agonists. The best overview of these ways can be found in  Crow et al (2021), from where the following has been stolen:

Pharmacokinetics of opioids as a class

For the most, opioids are well absorbed from an enteric form, and undergo significant first-pass metabolism to yield low-ish bioavailability figures.

Of these agents, the standouts are tapentadol and buprenorphine (with very high first pass metabolism taking out 80-90% of the active drug before it gets to the circulation) and remifentanil which does not survive for long in the circulation.

Opioids are - for the majority of them - weak bases with a pKa close to 8. This means that at physiological pH many of them will have a substantial fraction of the drug present in a lipid-soluble form.

Distribution and protein binding of opioids

All opioids are rapidly and widely distributed, except for remifentanil which basically has no time in which to do so, as its molecules are so short-lived.

Metabolism and elimination of opioids

All opioids undergo hepatic metabolism except remifentanil, which is broken down by plasma esterases. The vast majority of them have no active metabolites, but notably heroin and codeine have morphine as one of their metabolic breakdown products. Most of these metabolites are renally cleared, and would be expected to accumulate in renal failure.

Notable exceptions to the above include methadone, for which at high doses renal excretion becomes an important pathway of clearance. Apparently this is seen in daily doses exceeding 55mg.

Question 17 from the first paper of 2020 asked for "the advantages and disadvantages of the use of an intravenous infusion of fentanyl in comparison to morphine", with the examiners complaining that the candidates did not approach the question with sufficient clinical maturity. To be fair, these are people who were interns a couple of years ago, but that does bring up an important matter which has real-life relevance for intensive care people. In other words, you should be able to answer this question as a junior ICU trainee. The importance of this question is escalated considerably by the knowledge that Rinaldo Bellomo published an article on this exact topic in his journal, approximately a year before it appeared in the exam.

"The complications of spinal opioids are not an uncommon reason for admission to intensive care thus it is important candidates understand their pharmacology", the college commented on Question 12 from the first paper of 2009. Obviously, it was not that important, as the question has not been repeated ever since.  The chapter on the pharmacokinetics of drugs in the subarachnoid and epidural space would probably have more relevance to the revising trainee, as its focus is thoroughly non-opioid, focusing more on the weirdness of administering anything directly into the CSF. Bernard et al (2002) give a good opioid-specific account of what happens.

Physiology of the opioid receptor

Opioid receptors are a large family, and it would likely be pointless to discuss each one and their distribution, particularly as this is a rapidly developing field and material current at the time of writing would be superseded by new publications within about fifteen minutes. Thus, only timelessly generic things will be mentioned here, and the reader with thirst for more pharmacodynamic information will be referred to excellent review articles such as Waldhoer et al (2004).

Each receptor subtype is responsible for specific clinical effects:

The receptors are distributed unevenly though the CNS. μ-opioid receptors, which are probably the most important clinically, are located all over the CNS, but particularly in the following key areas:

Question 24 from the first paper of 2014 asked for some detailed information about the mechanism of the pharmacodynamic effect of opioids. Analgesia, respiratory depression and constipation were specifically of interest. For a brief and to-the-point overview of the former, the reader is redirected to the Australian Prescriber, where the matter is dealt with by Loris Chahl (1996). Individuals with a high pain tolerance could also be pointed to Gavril Pasternak (2005), or to the side-effects section of Zöllner & Stein, but most normal people would agree that this would be too much for a single CICM exam answer. Useful content has been scraped out of these texts and arranged below.

Mechanism of opioid-induced analgesia is by two main effects:

This is also the mechanism of action of endogenous endorphin substances, which also bind to the same receptors. Their physiological role is also related to pain, and - weirdly - to satiety, sexual arousal, goal-oriented incentive selection and maternal behaviour. They appear to be released by the pituitary gland in response to pain and injury, which suggests some sort of "natural analgesic" role.

This is mediated by two main mechanisms:

The existence of this effect is frankly baffling, because, just as with the oculocardiac reflex which can stop the heart in response to eye pressure, it is impossible to imagine what normal physiological role it might play. Why would the human organism want this to happen?

Other opioid side effects

Krishnamurti, Chandrasekhar, and SSC Chakra Rao. "The isolation of morphine by Serturner." Indian journal of anaesthesia 60.11 (2016): 861.