This chapter is related to one of the aims of Section C(i) from the 2017 CICM Primary Syllabus, which expects the exam candidate to "define and explain dose-effect relationships of drugs, including dose-response curves...". The expectation goes on to include all sorts of pharmaterminology but the understanding of all of these concepts begins with the discussion of dose-response curves and how these are influenced by drug-receptor binding. Though the college has never opened a viva or written SAQ with this, it is expected knowledge and therefore the trainees are expected to make themselves familiar with these matters.

The best article for this topic is the dated review by  Holford & Sheiner ("Understanding the dose-effect relationship", 1981).  Birkett (1995) has some pharmacodynamics in Chapter 10 (p.93) but their discussion of dose-response relationships is fairly minimalist. The excellent brief entry by Part One covers the more ground thank Birkett, and with less superfluous fluff. The time-poor exam candidate would generally do well to limit their pre-exam reading to Part One in the broadest sense.

Graded dose-response curves are graphical representations of the relationship between the dose of the drug and the effect it achieves. More specifically, the concentration of the drug is used, rather than the actual dose, and the term "dose-response curve" seems to remain in use mainly out of indolence, according to Waud (1981). They are also usually plotted on a logarithmic scale of concentration which stretches the lower end of the dose range, and so strictly speaking they should be called "log-concentration response graphs". However, practically nobody calls it that, and nobody brings up this discrepancy to complain, outside of grumpy pharmacology professor editorials. Masses of published literature using the term "dose-response curve" are in print, which suggests that journal editors aren't sending these articles back to have this nomenclature corrected. Ergo, henceforth the incorrect nomenclature will be used liberally in this article. 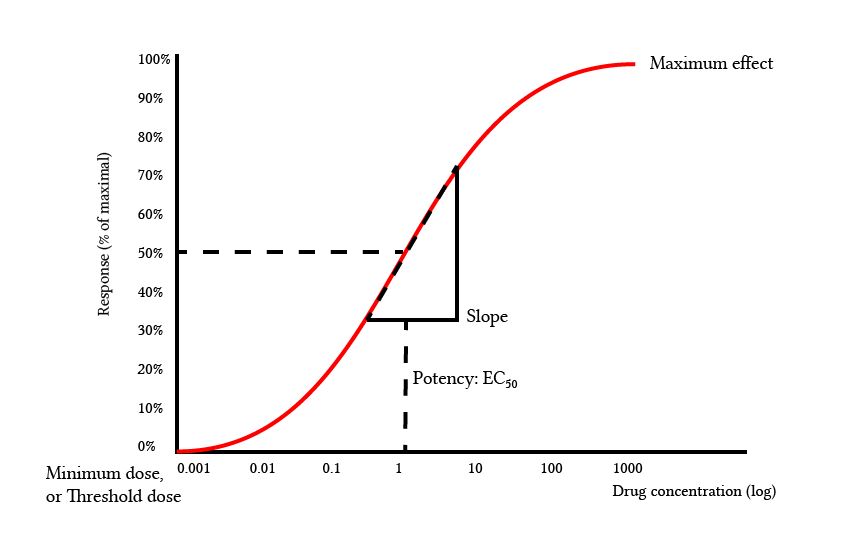 There is a reason these curves have this shape. 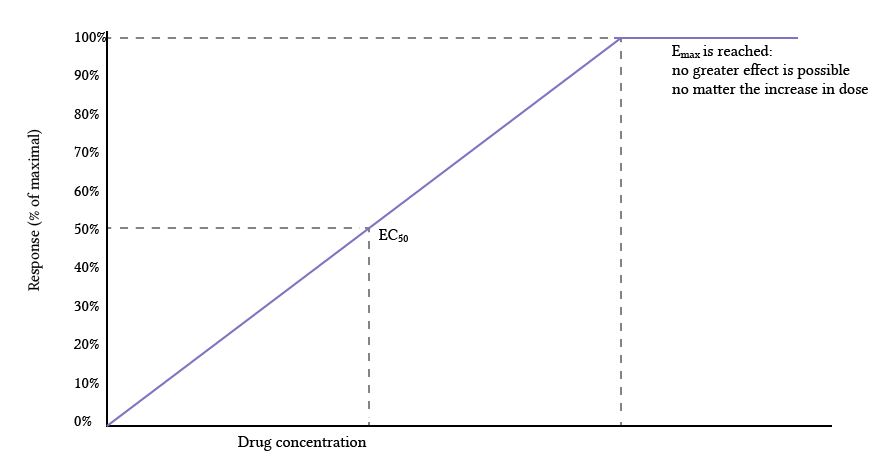 There are only very few examples of this sort of relationship in medicine. In general, a linear increase in effect is only seen in situations where the effect is a risk of something happening, eg. the linear relationship between dose in cigarettes and the risk of cancer (Law et al, 1997). Even the latter is probably not completely linear because there is a practical limit to how much cigarette smoke you can inhale in a given time, and it has in fact been demonstrated that the rate of increase in risk for super-heavy smokers is lower because they inhale less smoke from each cigarette. In short, the normal dose-response curve is hyperbolic.

The amount of effect depends on how many of the drug targets you’ve managed to bind your drug to. So, as you approach a 100% receptor binding, the effect of increasing the dose diminishes. i.e. there are only so many receptors for the drug to bind to. When these receptors are all saturated, adding more drug will not increase the effect any further. 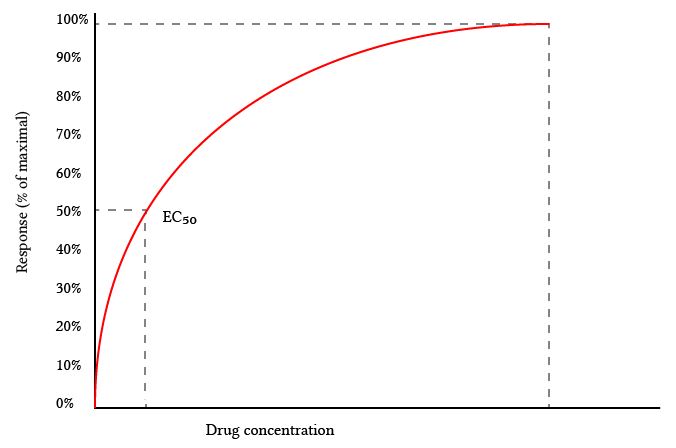 This representation of the dose-response relationship is accurate but has some disadvantages. Geographically, the curve is dominated by the relatively useless upper dose range (observe how much space is wasted on it), and this makes it difficult to compare lower doses. Thus, the dose-response relationships of drugs cannot be compared as easily. Often the range of drug concentrations during in vitro research may span through several orders of magnitude, which would make a linear concentration scale almost useless. Because of this, dose-response curves are usually plotted with the concentration as a logarithmic scale (usually base 10). 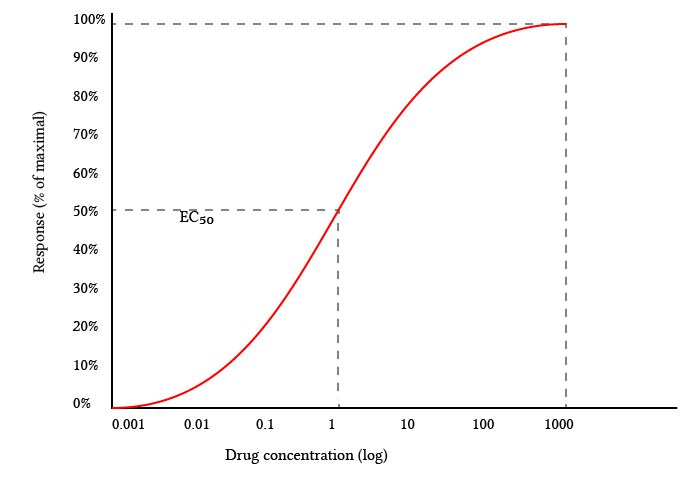 This makes the relative potency of drugs more easy to compare. The logarithmic graph also gives a more convenient scale at low concentrations where the response is changing rapidly with dose. At high concentrations, where the response changes slowly with dose, the graph is compressed; nothing much to see up there. The area of the graph where the dose-response relationship is approximately linear (between 20% and 80% of the maximum effect) is the area where the "resolution" of this graph is highest, and this is also the dose range you'd be most interested in from a clinical standpoint.

This convenience-based explanation for the logarithmic-linear representation of dose-response data is actually something of an anachronism. Holford & Sheiner (1981) explain that the linearity of the dose-response relationship between 20% and 80% response made it easier to use simple linear regression to describe the slope of the line, and then use statistical tests of parallelism to compare between pre and post-antagonist effects, for example. In the view of the aforementioned authors, with more sophisticated tools of analysis the familiar sigmoid log-linear graphs are obsolete as they distort the data unnecessarily.