This chapter is related to one of the aims of Section C(i) from the 2017 CICM Primary Syllabus, which expects the exam candidate to "define and explain dose-effect relationships of drugs, including dose-response curves with reference to... graded and quantal response". At no stage has this ever appeared in historical primary exam papers, but it is a topic so ubiquitous that one can see the merit of squandering an entire chapter on its discussion, even if there may be no immediate pragmatic benefit from it in terms of exam marks.

The best resource for this topic is probably Mark von Zastrow's chapter for the 14th edition of Katzung's Basic and Clinical Pharmacology. The quantal dose response territory is covered there without any sort of references but to a level of detail which would surely satisfy any future exam application of this topic. If one for some reason required something more in-depth, one may instead look at something like B.J.T Morgan's Analysis of Quantal Response Data (2013), which is 511 pages of articles from the Monographs on Statistics and Applied Probability series (the 46th volume).

Birkett (1995), in one of the Australian Prescriber articles which would eventually become “Pharmacokinetics made easy”, wrote:

Let's expand on that.

A quantal response is either there, or it is not. There is no spectrum of greyscale between "response" and "no response". This is obviously completely arbitrary. Realistically, there may be a clinically relevant spectrum for this drug - for example, if your experimental drug is noradrenaline, there is obviously a graded spectrum of clinical responses with increasing dose- but because you have defined an all-or-nothing experimental endpoint (for example, death) the data ignores this graded spectrum. The dose-response curve of an individual experiment would therefore look something like this:

You can't even call that a curve while keeping a straight face. As the graphic above is never seen in serious publications, the intelligent reader would at this stage correctly identify it as a plot device leading to the exploration of population pharmacodynamic data. Indeed, one would perform the experiment on a whole group of animals/volunteers/isolated murine ileum segments and then have data available which would look a little like this: 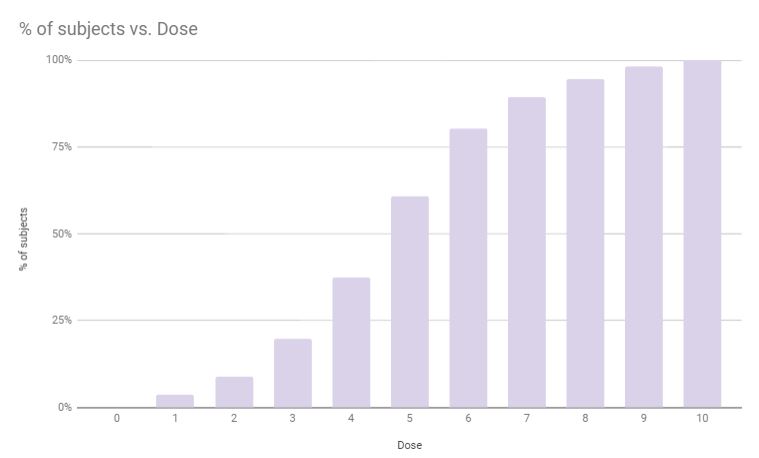 Looking at these data, there is obviously a great deal of population of subjects is obviously heterogeneous with some small percentage requiring a tiny dose to achieve the end-point effect, and some small percentage still failing to achieve the end-point even at a very high dose. This distribution can be described as a bell curve: 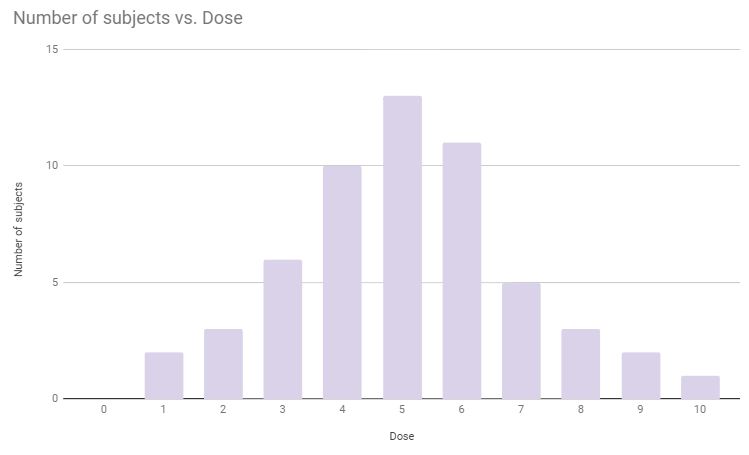 At this point, a maths nerd might point out that these dose-response data appear to be normally distributed, which means we can finally return to the familiar sigmoid-shaped dose-response curve we are all more comfortable with. It can be easily reconstructed from this bunch of rectangular dose relationships (in essence, they are stacked atop each other, and a line connecting them is produced). 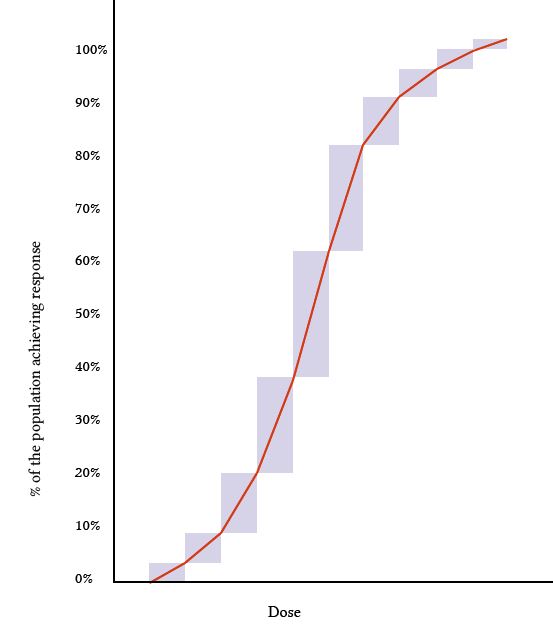 Thus, instead of demonstrating a graded effect response to increasing drug concentration, one now has a sigmoidal curve describing the cumulative percentage of a population which can be expected to achieve a response at a given dose. This graph actually has a series of important and interesting anatomical features, which are represented by a single dot-point in the 2017 CICM Syllabus, and therefore somehow an entire chapter in Deranged Physiology.

Some readers may point out at this stage that all the textbooks have these quantal dose-response curves plotted along a logarithmic dose axis. For example, here are snippets from Katzung and Goodman & Gillman.

One might argue that this is necessary where the range of possible doses is very great. Sure, you might need a logarithmic dose axis if you are using a drug which has a dose range covering several orders of magnitude, but that seems preposterous. How many drugs can you think of that have an effective dose range between (for example ) 1mg and 1000mg? But this does not seem to matter. One might observe that one of the examples above has a dose range between 5 and 20; the publisher used a log2 x-axis scale, just to make it logarithmic.

It is difficult to track down the reason for this weird attachment to logarithms. Some reputable sources attribute this to pharmacological convention. For many drugs, the distribution of quantal dose-response data is not as neatly normal as this. The use of a log scale "expands the scale at the low concentrations where effect is rapidly changing and compresses it at high concentrations where the effect is changing slowly" and "linearizes the the dose-response range of interest  20% - 80%". But surely the range of population effects already follows a normal distribution, and would normally achieve a sigmoid shape anyway?

Not always, it turns out. Drugs often (though not always) have hyperbolic Michaelis-Menten receptor-drug binding kinetics, which means the composite quantal dose-response curve becomes skewed to the right. Your "% population vs dose" graph might look like this: 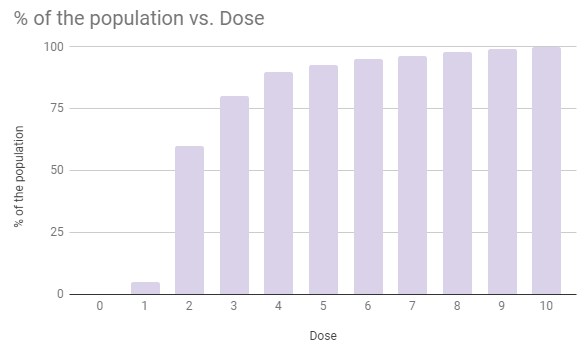 In those scenarios, transforming the x-axis into a logarithmic scale forces the graph to resemble a normal distribution.  "Logarithmic transformation of the dose axis reverses this skewing and provides a nearly perfect fit to a normal distribution in the central 95% incidence range", Lutz et al (2005) wrote, applying this to a model with hypothetical cancer cells.

von Zastrow, M. "Chapter 2: Drug Receptors & Pharmacodynamics ". Basic & Clinical Pharmacology, 14th edition. [The link points to the 2009 version of the chapter, which comes from the 12th edition of that book - somehow, the entire textbook is available for free]