This chapter is related to one of the aims of Section C(i) from the 2017 CICM Primary Syllabus, which expects the exam candidate to "define and explain dose-effect relationships of drugs, including dose-response curves with reference to...therapeutic index". The therapeutic index is actually only one of the many interesting anatomical features of a quantal dose-response curve, and one might argue that the "therapeutic index" in the college syllabus is, in fact, a code for "all terms and definitions pertaining to the interpretation of quantal dose-response graphs". One might also argue that, because this material has never come up in any of the historical part paper SAQs, any in-depth discussion of it represents a frivolous waste of trainee time. The latter, of course, has never been a deterrent to this author; and given the ubiquity of these items in professional literature, it would not be surprising for the college to one day inject this topic into a particularly vicious viva station.

The best brief introduction into this area can be seen in Mark von Zastrow's chapter for the 14th edition of Katzung's Basic and Clinical Pharmacology. If one does not own this textbook or lacks institutional access, one may be able to avail themselves of the 9th edition which defies all expectations by somehow existing online as a freely available pdf. The relevant material can be found on page 31 of von Zastrow's chapter, which corresponds to page 47 of the pdf.  For something more detailed, one might try to get a hold of Therapeutic Index by Abughazaleh & Tracy (2007) which is locked behind the Wiley paywall.

Anatomy of the quantal dose-response graph

When faced with the need to discuss these curves in some sort of hypothetical viva situation, the CICM exam candidate should avail themselves of a scrap of paper, and reproduce a diagram which, at minimum, should contain the following elements: 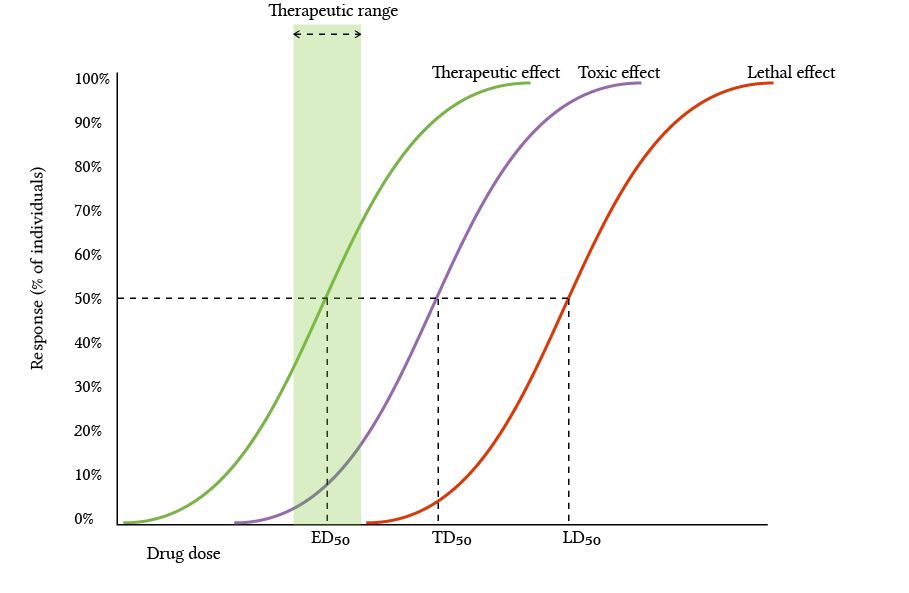 Having produced this, the exam candidate may be called upon to elaborate.

The International Union of Pharmacology Committee on Receptor Nomenclature and Drug Classification (Neubig et al, 2003) give an "official" definition as "the dose of a drug that produces, on average, a specified all-or-none response in 50% of a test population" which is essentially the same as the Katzung one, and in fact all the textbooks generally use a similar selection of words to express exactly the same content.

So, what is the point of this metric?

This is the dose at which some clinically relevant toxic effect is reported in 50% of the tested population. To borrow credibility from von Zastrow, it is

All the definitions offered by the major textbooks are much the same. Again, like for all quantal dose-response relationships, many different interpretations are available of what a toxic effect is, and numerous TD50s for each drug may be generated. 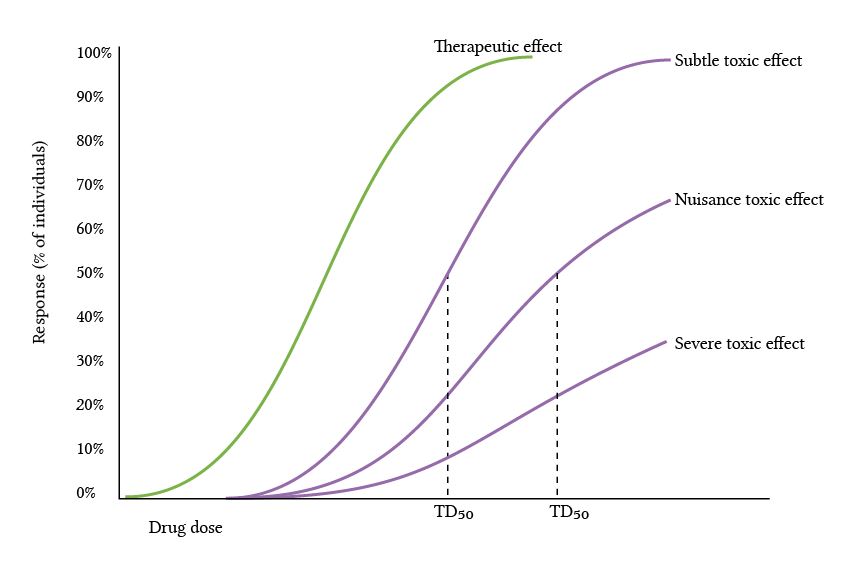 There are all sorts of problems with determining the TD50:

Predictably, this is the dose required to kill 50% of a test subject population. LD50 is identical in definition to TD50, except the toxic effect is death. The 14th edition of Katzung does not define it much beyond this level, nor does Neubig et al (2003), probably because it would be pointless to do so. If one were to look for a gold standard, one could go to the ancient yellowed manuscript by J.W Trevan, who first introduced the concept into scientific discourse in 1927 as a means of defeating the contemporary error of comparing drugs in term of minimum toxic dose.

"I would suggest that the term “ minimal lethal dose,” with its variable meaning, should be dropped altogether, and that toxicity should be stated primarily in terms of the “ median lethal dose,” that is the dose which kills 50 per cent, of a large group of animals. As a convenient abbreviation I would suggest for this the symbol LD 50"

To offer a suitable sacrifice for the gods of pharmacology, Trevan generated his LD50 graph by using data from 370 laboratory mice who were injected with lethal doses of cocaine.

Obviously, as with everything, there are some problems with the usefulness of LD50  as a means of comparing drugs. For example:

The therapeutic index (or ratio)

The literature seems to use the terms "therapeutic index" and "therapeutic ratio" in a way which might suggest that they are synonymous, even though there is an SAQ in the local anaesthetic primary exam which asked the candidates to interpret each term separately. Fortunately, CICM examiners have not yet plagiarised this question.  In Katzung, the therapeutic index is defined as

The official IUPC documents don't seem to have any sort of gospel answer, and every piece of literature seems to have some arbitrary way of defining this concept. Abughazaleh & Tracy (2007) acknowledge this. "Although the general concept of the therapeutic index is describable by most individuals", they begin their article, all sorts of operational issues (like the lack of a formal definition) "continue to confound determination and clinical utility of the ‘‘therapeutic index.’’". These pharmacologists' authority as experts (Wiley gave them a chapter from their Encyclopedia of Clinical Trials) suggests that one should at least be vaguely aware of how they define this concept:

"Therapeutic index is most commonly defined as the ratio of the median lethal dose (LD50) to the median effective dose (ED50), as determined in preclinical animal studies, [which] reflects the selectivity of a drug to elicit a desired effect rather than toxicity"

All of these variants are probably valid on some level, but the exam-going CICM trainee would probably be better off treating Katzung as the definitive official source for this sort of thing. As such, the von Zastrow definition is used for the purposes of the diagrams here. 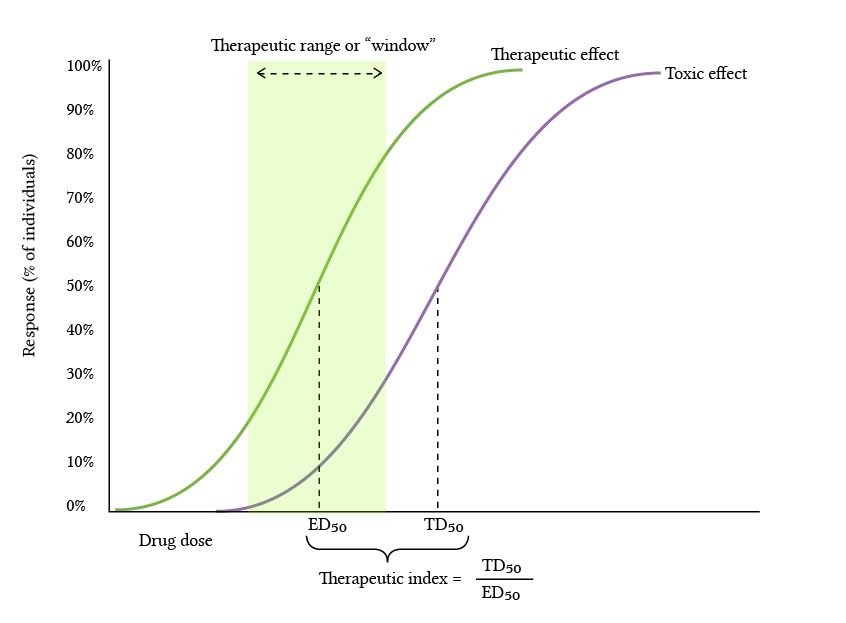 What is the point of the therapeutic index?

For real-life bedside clinical purposes, this therapeutic index concept leaves much to be desired.

In Katzung, the therapeutic window is defined as

In contrast, Birkett (1995) called this a therapeutic range , and describes it using an example rather than offering any exam-worthy definition. The therapeutic range, he says, is the range of drug concentrations "which gives a therapeutic effect... in most patients with an acceptable incidence of adverse effects."

The concept of the "therapeutic window" is perhaps more reasonable and flexible than the therapeutic index.  Again, it has no formal definition, but most authors describe it as the dose range over which drug is effective and relatively non-toxic in most of the population. The von Zastrow definition quoted above is actually not seen very often in the literature because it fails to define what an acceptable minimum is (one percent of the population? Ten percent?).

Some related terms become confluent with the therapeutic window in the literature. For example, the highly venerated Brandis website defines the therapeutic window as the percentage by which the ED99 must be increased to achieve TD1, which closely resembles the definition of the CSF (Certain Safety Factor), otherwise referred to as the Margin of Safety. This metric has the advantage of not requiring the exposure of test subjects to doses which will cause toxicity in 50% of them, but therre obvious disadvantages as well. For example, it may be impossible to achieve a response in 99% of the population (i.e. ED99 often cannot be established) and some mild toxic effect in 1% of the population might be viewed as a trivial risk which has minimal clinical relevance.