This chapter is related to one of the aims of Section C(i) from the 2017 CICM Primary Syllabus, which expects the exam candidate to "define and explain dose-effect relationships of drugs, including dose-response curves with reference to...partial agonists, mixed agonist-antagonists and inverse agonists". It is another topic in pharmacodynamics which seems important, enjoys extensive testing in the world of anaesthetic basic science exams, and has been ignored completely in the CICM primaries (at least among the publically available written papers).

For the purposes of passing some future viva or written SAQ, one can safely limit oneself to reading the end parts of Mark von Zastrow's chapter (Ch.2) from Basic and Clinical Pharmacology (14th ed., or whatever the most recent edition is). No detail beyond this is required. If one is able to get a hold of a copy, the concise definitions and examples from Neubig et al (2003) are also excellent.

The International Union of Pharmacology Committee on Receptor Nomenclature and Drug Classification (Neubig et al, 2003) give an "official" definition as

"Agonist: A ligand that binds to a receptor and alters the receptor state resulting in a biological response"

Which sounds a lot like the definition of drug effect (as in effect that's what it is).  There is a number of different definitions, and generally they are all either an echo of the statement above, or an attempt to explain the concept with an example. It would be unexpected to encounter the need to define "agonist" in an exam scenario, as the meaning of the term is intuitively understood by most, and the task of defining it is more of a test of English language control, which probably does not belong in a higher-order medical college examination. One would be more likely to be asked to describe what the differences are between different types of agonists.

An allosteric modulator is:

"A ligand that increases or decreases the action of an (primary or orthosteric) agonist or antagonist by combining with a distinct (allosteric or allotopic) site on the receptor macromolecule."

In short, classic direct binding to the receptor is "orthosteric", and binding somewhere to the side of it is "allosteric". The definition of the orthosteric site appears to be somewhat arbitrary, but generally it is the site where the endogenous ligan likes to bind. Allosteric modulators can have a positive or negative effect on the receptor-agonist interaction, i.e. these can be agonists or antagonists, but the main part of the definition is that they do not interfere with the binding site of some "primary" agonist ligand. In fact, these drugs do not need to have any effect whatsoever on the interaction of the primary agonist and the receptor; their main effect may be as a competitive antagonist of other drugs which might want to bind to the same allosteric site.

A full agonist is a drug which is capable of producing a maximum response that the target system is capable of:

There is no obligation for this full agonist effect to happen at full receptor occupancy. Neubig et al(2003) go on to explain that this might happen for different drugs at different doses, different concentrations or different fractions of the total receptor pool. For instance, the diagram below has several full agonists with different potencies. 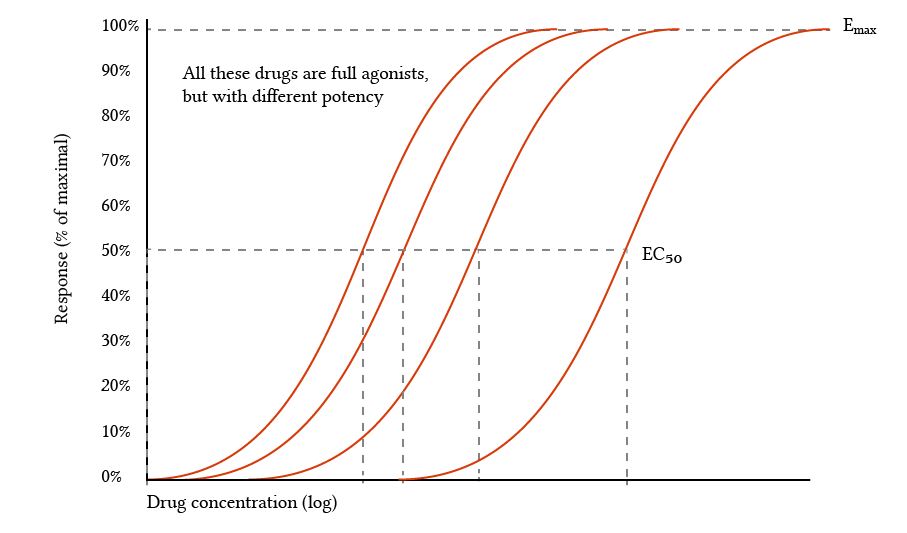 So, if the agonist drug can exert a maximal systemic response at some sub-total receptor occupancy, some receptors must be around which remain unbound even at maximal effect. These are the spare receptors.

This nomenclature is obviously something of a pharmacological fantasy, as the organism has not been keeping a surplus of receptors just to have them on hand as a reserve. According to the IUP,

"A pharmacological system has spare receptors if a full agonist can cause a maximum response when occupying only a fraction of the total receptor population. Thus not all of the receptors in the tissue are required to achieve a maximal response with some high efficacy agonists"

It would be inaccurate to say that these receptors are completely superfluous, in excess to physiological requirements, or inactive. All receptors contribute. If you knock out some of these "spare" receptors with an irreversible antagonist, the full agonist drug will still be able to achieve the maximal response in the system, but it will be acting at a reduced potency (i.e. a higher concentration will be required).

A partial agonist can never achieve the maximal response that the system is capable of, because its efficacy is lower than that of a full agonist. To borrow a longer, more wordy definition from the IUP,

[A partial agonist] "in a given tissue, under specified conditions, cannot elicit as large an effect (even when applied at high concentration, so that all the receptors should be occupied) as can another agonist acting through the same receptors in the same tissue" 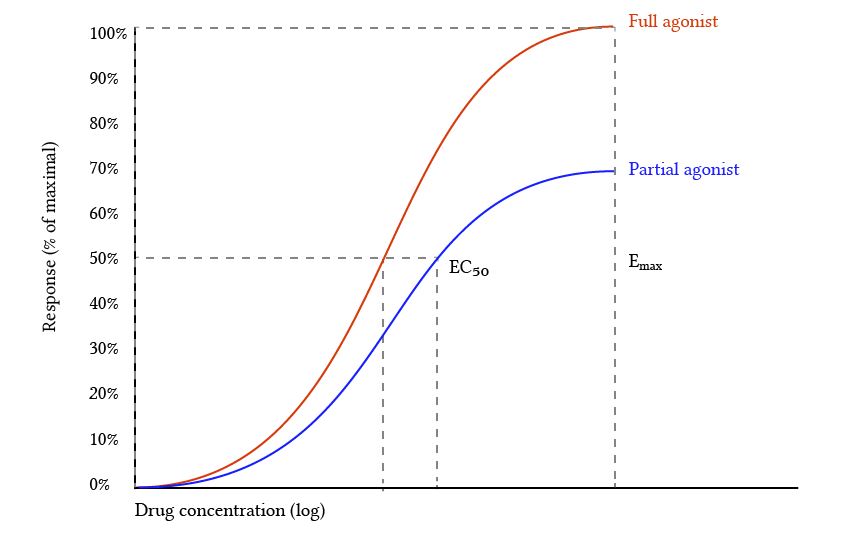 This maximal efficacy thing is related to several possible mechanisms. Perhaps the partial agonist occupies all the receptors (i.e. achieved full receptor occupancy), and interacts with them in a manner identical to the full agonist, but for some of the receptors it inexplicably fails to activate the ligand binding site or secondary messenger system. The obvious extension of this is where the drug, while binding avidly to the receptors, somehow fails to activate any of them - in which case it is said to be an antagonist. Alternatively, a drug may be a partial agonist because it produces a different distinct structural change in the receptor - for example, an ion channel might open incompletely with a partial agonist, with ionic conductance reduced thereby. The latter effect is observed in the effect of different partial agonists on the acetylcholine receptor (Mukhtasimova & Sine, 2018). 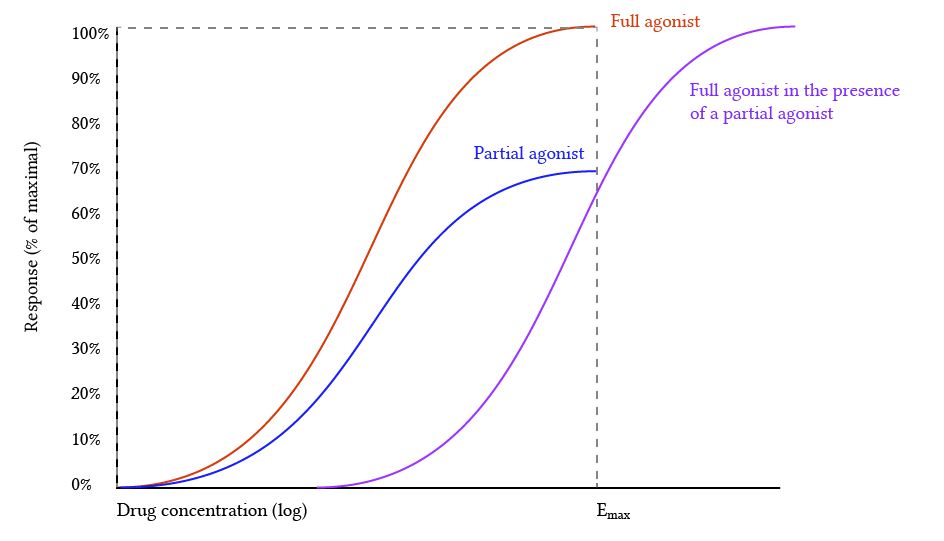 This can extend naturally into biological systems which have some baseline of endogenous receptor-ligand activity which exists in the absence of drugs (which - let's face it- is virtually any biological system). In such cases, a drug may have an inverse agonist effect by its competition with an endogenous agonist ligand.

An inverse agonist is a ligand which, by binding to a receptor, produces the opposite of the effect which would be produced when an agonist binds to the same receptor. IUP defines it as

"A ligand that by binding to receptors reduces the fraction of them in an active conformation...  if some of the receptors are in the active form in the absence of a conventional agonist".

Though it can also decrease the available fraction of active receptors by preferentially binding to receptors which are in their inactive state (thereby reducing the total possible pool of receptors). In short, these antagonist drugs - when given in the absence of any other drug - will have the opposite effect to the normal expected effect of receptor activation, because of some baseline resting level of autonomous receptor activity.  A drug like this is said to have "negative efficacy" - whereas the maximum efficacy of a full agonist is said to be 100%, the efficacy of an inverse agonist is less than 0% (i.e. -10% of -20%). An inverse agonist's oppositional activity can be reduced in magnitude by a competitive "neutral" antagonist which also binds the receptors but does nothing with them once attached. 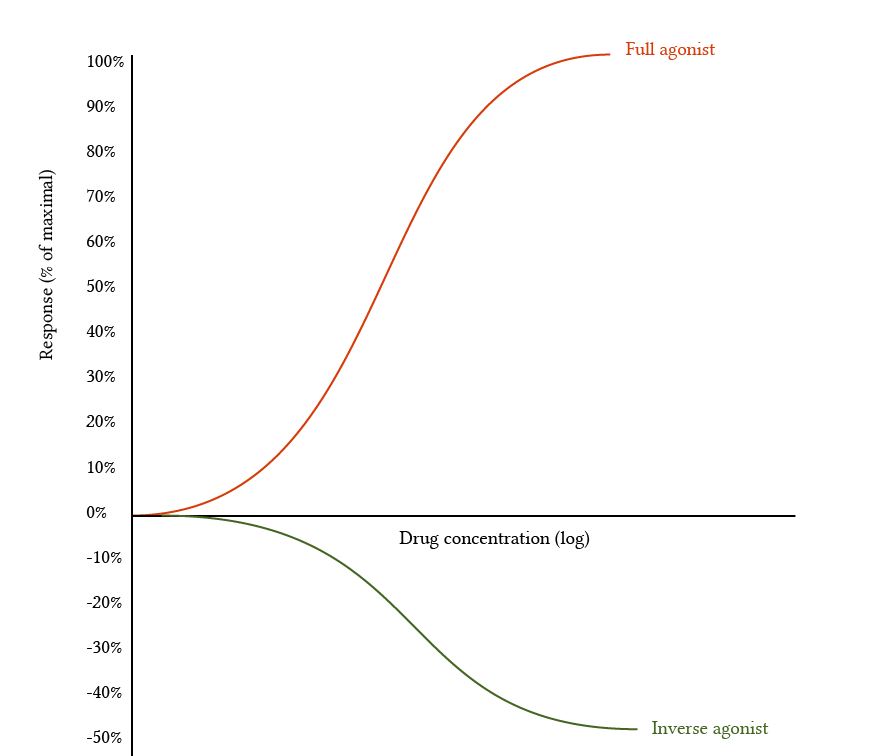 An excellent example of this is offered by Barbara Plevry (2004) in terms of the effects of various drugs on the GABA receptor. Benzodiazepines are agonists which increase the effect of GABA by acting as allosteric modulators of the GABA receptor, and they produce anxiolysis and an antiepileptic effect. β-carboline derivatives (eg. norharmane) are also allosteric modulators, but they act as inverse agonists of the GABA receptor, and they reduce the effect of GABA thereby causing anxiogenesis and seizures. Flumazenil is a "neutral" antagonist which reverses both the sedating effects of benzodiazepines and proconvulsant effects of β-carboline.