This chapter is related to one of the aims of Section C(i) from the 2017 CICM Primary Syllabus, which expects the exam candidate to "define and explain dose-effect relationships of drugs, including dose-response curves with reference to...competitive and non-competitive antagonists ". Somehow, this fundamental topic does not seem to have ever come up in the CICM Part I written exam. One can only assume it was the topic of some of the vivas which start with "this viva will discuss dose response curves". The only time this topic has ever been mentioned in the papers was in Viva 1 from the first paper of 2010 where morphine was used as a model drug for dose-response pharmacokinetics and "effect of competitive and non-competitive antagonists were also tested". In case they are "also tested" at some other future juncture, this chapter might eventually become relevant.

The best peer-reviewed reference for this is probably Barbara Pleuvry's 2004 article, but it is unfortunately paywalled by Elsevier. A solid free alternative exists (Lees et al, 2004) which is in fact even more detailed,  but it is written in a veterinary journal, which may be offputting to anthropocentric trainees.  Given that questions on this topic are unlikely to ever be more inspired than merely asking for definitions, one could safely limit oneself to the official resources, for example Mark von Zastrow's chapter (Ch.2) from Basic and Clinical Pharmacology. In terms of definitions alone, the next most authoritative source would have to be the official IUP statement (Neubig et al (2003).

In summary, those definitions are:

The chapter in Katzung (14th ed.) doesn't so much define an agonist or antagonist, but rather describes what they do:

"In the presence of a fixed concentration of agonist, increasing concentrations of a competitive antagonist progressively inhibit the agonist response... Receptor antagonists bind to receptors but do not activate them; the primary action of antagonists is to reduce the effects of agonists".

The International Union of Pharmacology Committee on Receptor Nomenclature and Drug Classification (Neubig et al, 2003) give an "official" definition as

"Antagonist: A drug that reduces the action of another drug"

with the caveat that this may describe endogenous ligands as well as drugs. In general, all sources tend to agree that agonist and antagonist are antonyms.

A competitive antagonist is so called when, in its presence, there is just no way for the agonist to bind to the active receptor, i.e the two substances are in competition. That might be because of various different mechanisms. The antagonist and the agonist may bind to the same sites, i.e receptor occupancy may be mutually exclusive. Or, they may bind separate but adjacent sites on the same receptor in such a way that their positions overlap, such that one ligand blocks both its own binding site and the adjacent one. Lastly, by binding the receptor, the antagonist ligand may stimulate a conformational change in the receptor which completely obscures the binding site of the agonist. In short,

"In competitive antagonism, the binding of agonist and antagonist is mutually exclusive."

This is roughly the same definition as one might find in any textbook. For instance, Katzung (13th ed.) defines competitive antagonism as

The relevance of this? Well. "Competitive" implies that the agonist and antagonist are in contest, and one side may win over the other with prevailing numbers. Because the substances are in competition for the same site, the increasing concentration of one substance can overcome the other. By adding more and more agonist, one can crowd out the antagonist molecules. Ultimately, at some hypothetical super-high agonist concentration, all the available receptors would be bound to the agonist, with the antagonist molecules roving listlessly without any available binding sites. In short, in presence of a competitvie antagonist, the Emax (efficacy)  of the agonist is unaffected, but the potency is reduced.

If one is ever asked to produce some sort of graphical representation of this, one could do it in one of two different ways. Firstly, one could reproduce a logarithmic dose-response curve for an agonist in the presence of an antagonist. 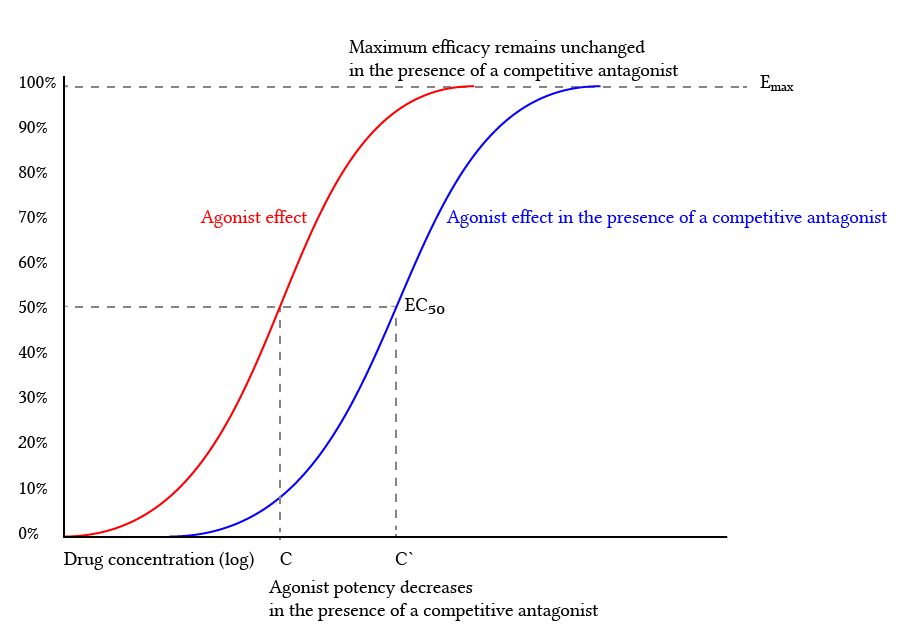 The most important mark-scoring features on this graph are:

Alternatively, one may reproduce a non-logarithmic graph for whatever reason.
It would then look like this: 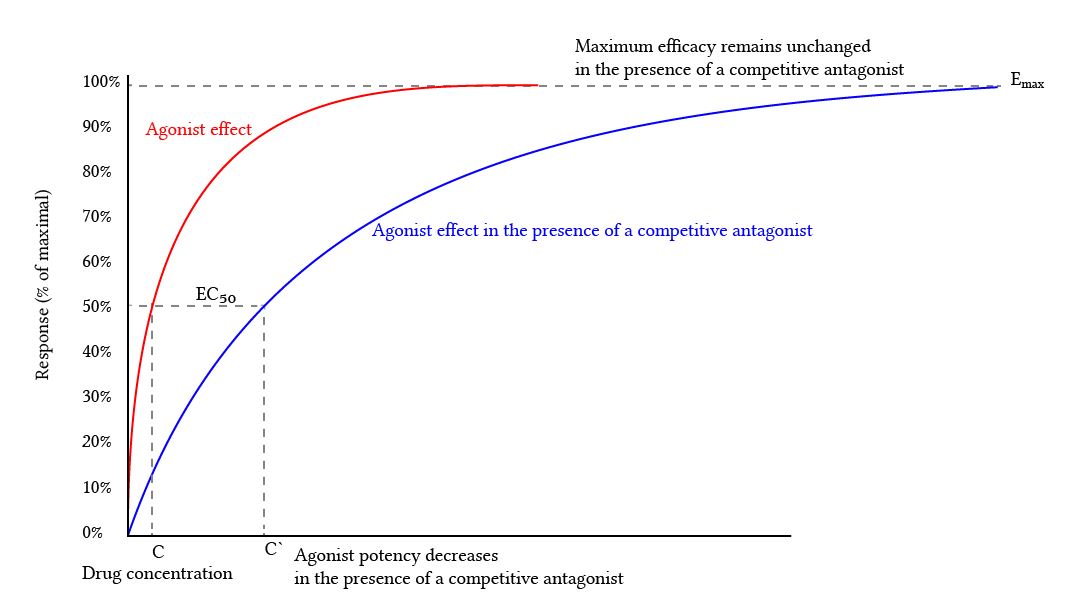 There is no reason to do it that way, and it contains the same data.  The EC50 values for agonist sans and avec competition are designated as C and C` here so that it looks like the graph in Katzung, which will doubtlessly be reproduced on whatever marking criteria the examiners have.

The Schild equation and the Schild plot

So, what the hell is the point of this? The best (free) explanation of the importance and limitations of this equation can be found in David Colquhoun's article from 2007. Basically, plotting the results of an experiment on two drugs can help one determine whether one drug is behaving as a competitive antagonist of the other, as well as other characteristics. The plot has several anatomical features which can be used for this purpose. The extrapolated line crosses the x-axis, and at this intercept, one finds the pA2 value, which represents a logarithmic measure of the potency of the antagonist.  The slope of the graph gives information regarding the nature of antagonism. For competitive antagonists, the slope should be close to 1. In the unlikely case that the reader needs to know more about this, Wyllie & Chen (2007)  take this discussion to dark and hidden places of the pharmacology curriculum, but for the vast majority of doctors in critical care training, any further exploration of this topic would represent a wasteful misuse of cerebral bandwidth.

Non-competitive antagonism implies that the antagonist, while still opposing the action of the agonist, does so without competing with it for the binding site. The agonist may bind there all it wants; it will still do no good. This has implications on the effect of increasing the agonist concentration. To use a quote from Katzung (where a description is again used in lieu of a definition),

"...once a receptor is bound by such a drug, agonists cannot surmount the inhibitory effect irrespective of their concentration"

Following from this mess of nomenclature, it seems that there should be some scenario where an antagonist may be insurmountable but not non-competitive. Indeed, that is the case with irreversible antagonists, another term which occasionally appears (and which does not appear to have any sort of formal definition). It is usually used to describe some sort of high-affinity binding between the antagonist and the receptor which does not permit the binding of any further agonist molecules. This does not meet the abovestated definition of non-competitive antagonism because one substance is may be clearly interfering with the binding of the other, but it is by definition insurmountable.

Logically, these definitions permit the existence of an antagonist which is non-competitive but not insurmountable. That does in fact exist - one could describe a physiological antagonist as a non-competitive antagonist which is potentially surmountable. A physiological antagonist is not an officially defined term, but it is in common use to describe a situation where the  actions of one substance appear to act in opposition to another without either of them interacting with the same receptor population. Consider the effect of a calcium channel blocker on the effect of adrenaline; the same physiological parameter is affected and the actions of the inotrope are decreased with zero effect on its receptor binding, and by giving enough adrenaline one may overcome the effects of the antagonist activity.

Again, this is a concept which begs for a graphical representation, and in a viva scenario one would be expected to grab a piece of paper and sketch some dose-response curves. 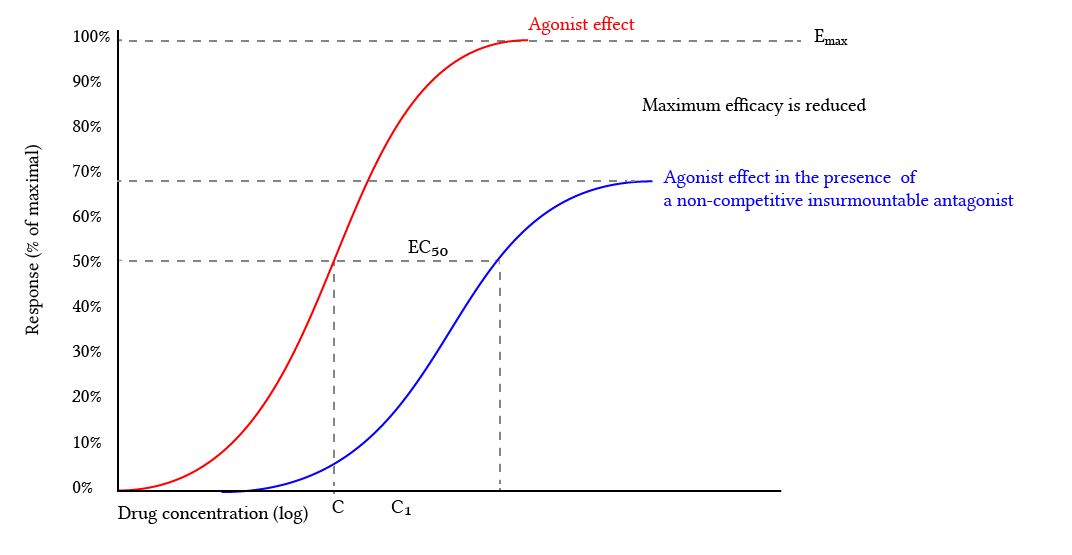 It does not seem to matter whether one decides to go logarithmic or not, as the point can be illustrated in either method: 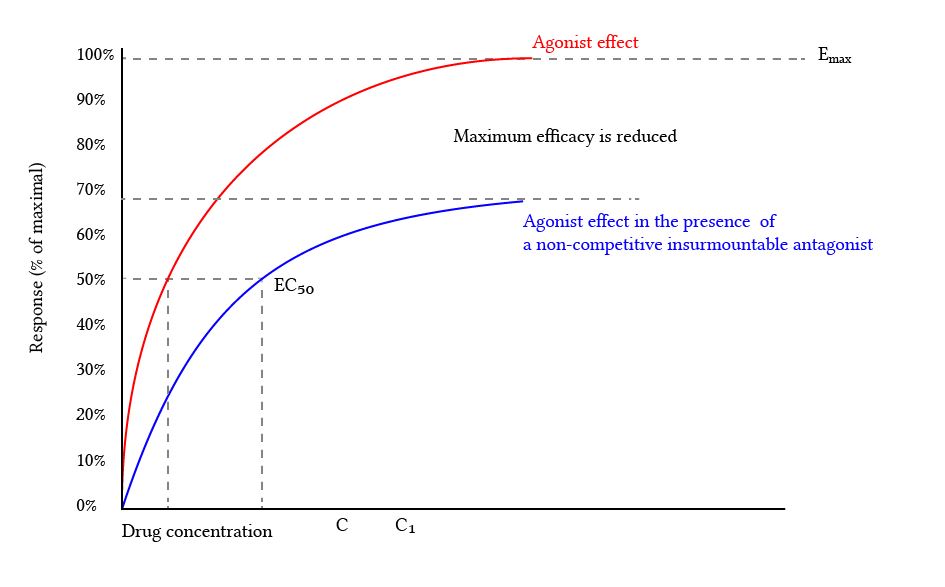 The most important concept to express in such a graph is the lower maximum agonist effect.