This chapter answers parts from Section B(v) of the 2017 CICM Primary Syllabus, which expects the exam candidate to "describe the concepts of effect-site and context sensitive half time". Though effect-site and context-sensitive half time have never come up in the exams in the past, the concept of half-life has been interrogated in Question 11 from the second paper of 2012, which asked about the the "pharmacokinetic factors that affect drug half-life." This very specific question is answered in the list at the end of this chapter. For the majority of situations, a simple definition of half-life will suffice.

The official college pharmacology text  (Birkett et al, Pharmacokinetics Made Easy - 2009) has an entire chapter dedicated to half-life (Chapter 3, p.30-38). This is certainly enough to pass the exam. For an alternative, one may wish to read David Greenblatt's article from 1985. This article discusses the limitations of this concept when applied to real-life situations.

The college in their half-paragraph answer to Question 11 from the second paper of 2012 offered the following definition:

Half-life (t½) is the time required to change the amount of a drug in the body by one-half during elimination.

This is very similar to virtually every other definition you might find out there. The half-life chapter of the official college pharmacology text starts with the following definition:

Half-life is the time take for the amount of the drug in the body (or the plasma concentration) to fall by half.

This definition is arguably the better one because it draws focus to the fact that plasma is the most conveniently sampled drug compartment and therefore any discussion of half life and elimination needs to be mindful of which fluid or substrate the drug half-lives in, or is eliminated from.

If the drug is eliminated by first-order kinetics, one can plot the concentration on a linear scale over time and achieve a familiar concentration/time curve, with predictable halving of the concentration with each passing time interval. This does not work if the elimination of the drug occurs at a constant rate which is independent of concentration.

Thus, in zero-order kinetics of elimination the concept of half-life becomes meaningless because the drug concentration does not decrease by half with every predictable time interval. Instead, we talk about drug dose removed over time. A good example is alcohol where one might discuss the number of standard drinks cleared per hour.

Half-life is dependent on the elimination rate

After giving a drug eliminated by first-order kinetics, you expect its concentration to fall according to some sort of elimination rate constant, which is usually expressed as a fraction cleared per unit time (eg. 0.1/hr is an elimination rate constant which represents the removal of 10% of the drug every hour). When plotted on a semi-logarithmic scale, the drug concentration/time curve therefore becomes linear (reflecting the fact that the concentration is reducing at a predictable linear rate).

With this linear predictability, you can use the following equation to estimate the concentration (C) of the drug at any given time (t)

The natural logarithm of 2 appears here because we are calculating half-life, i.e. something is getting divided by 2. If for whatever reason we were interested in some weird variable like tenth-life, we would end up using the natural logarithm of 10 (which is 2.303), and the equation would look like [k = 2.303/t⅒].

Half-life is dependent on volume of distribution

Elimination for most substances is a matter of having some plasma volume pass through a suitable organ of filtration which dutifully removes the drug from circulation and dumps it into some effluent (be it urine, bile, dialysate or exhaled gas). Obviously this process is going to be at least somewhat dependent on how much drug is available in the plasma volume; if most of your drug is hanging out in the tissue compartment bound to proteins, there will be little of it circulating in the plasma and therefore the clearance rate will be slower. This sounds very familiar. This concept is the volume of distribution.

Thus, half-life depends on both elimination rate and the volume of distribution. The relationship of all these variables can be expressed in the following manner:

This is the familiar equation describing the calculation of half-life. From this it follows that pathologies which change the volume of distribution may oppose the effect of pathologies which change elimination. In renal failure the fluid overload results in an increased volume of distribution, and though the clearance rate has decreased it does not seem to matter because less drug is available for clearance anyway; thus the half life might end up remaining the same even though one hasn't two nephrons to rub together.

The meaning of half-life

What, one might ask, is the point of this variable? Uneducated people tend to mistake half-life for clearance rate, but its relationship with Vd makes it a poor surrogate for clearance. Does this concept have any bedside value?

Well. Provided the drug's plasma concentration has any relationship to its physiological effect, the half-life will give you some idea of how much drug effect to expect at a given time interval after dosing. This obviously has some clinical relevance, insofar as it is important for doctors to have some idea of when the effects of their drugs can be expected to wear off. From half-life, one can also estimate how often one needs to give a drug in order to maintain a reasonably stable level of drug effect.

Half-life is an expression of elimination, an exponential function. If it were linear (i.e in zero-order kinetics) then doubling the administered dose would lead to the doubling of the duration of action (assuming concentration and drug activity are linked in a linear relationship). However if elimination is happening in a conventional first-order fashion, doubling the dose will lead to an increase of the duration of action by approximately one half-life. This basically means that increasing the bolus dose is a pointless way of achieving a longer period of desirable drug activity. Consider that if one wanted to increase the duration of action by two half-lives, one would need to load up with a catastrophically insane "octuple" dose which - in the context (let's say) of recreational drugs - would reach well into bat country. 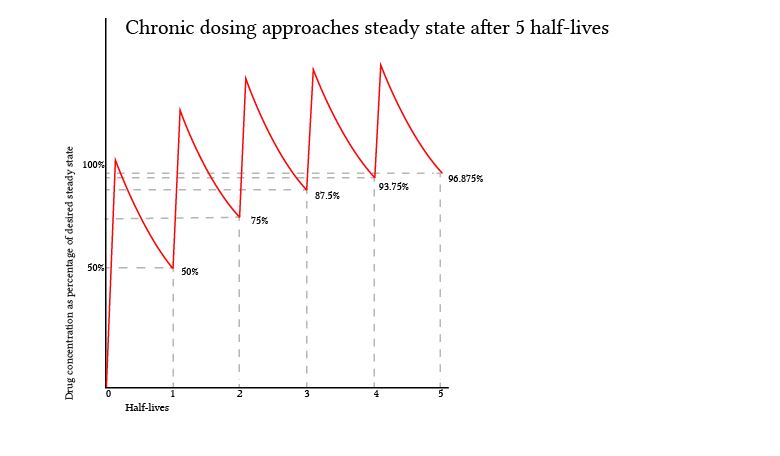 Ultimately, the drug will reach close enough to the steady state after about 5 half-lives. This has relevance to drugs with extremely long half-lives and significant toxicity. Smaller doses (less than that required to reach 100% of the desired effect with a single dose) must be given, many doses over the duration of a single half-life. Birkett (2009) offers chloroquine as an example, where the drug needs to be started five weeks before one travels to a "malarious" area in order to be effective by the time you get off the plane. The practical applications of these concepts are discussed in the chapter on maintenance dose and loading dose.

Limitations of the half-life as a clinically useful concept

The concept of half-life has limitations in terms of its bedside utility to the pragmatic intensivist. If the effect of the drug has only a minimal relationship with its plasma concentration, the half-life becomes only marginally important. An excellent example of this is the relationship of aminoglycoside dosing to antibiotic effect against urosepsis and the plasma half-life of the drug. Gentamicin has excellent post-antibiotic effect and will continue to exert this effect long after the plasma concentration has half-lived down to minute fractions of the administered dose.

Half-life (in its conventional form) also has the limitation of being unfairly plasma-centric. Again using gentamicin and urosepsis as an example, the plasma half-life has relevance to systemic toxicity but will probably have little relevance to the "killing power" of the antibiotic against the bugs in the urine, where this renally excreted drug will rapidly be concentrated to massive levels (perhaps several orders of magnitude above MIC).

Factors which influence the half-life of drugs

To answer Question 11 from the second paper of 2012, the following factors influence the half-life of drugs: