The context-sensitive half time is a concept that relates the duration of drug administration to the time required for a 50% decrease in plasma concentration. It was developed to provide insight into how long it takes to recover after infusions of intravenous anaesthetics.

The official college pharmacology text  (Birkett et al, Pharmacokinetics Made Easy - 2009) has an entire chapter dedicated to half-life (Chapter 3, p.30-38) but mentions nothing about context-sensitive half time.  For a detailed discussion of this concept, one needs to go to anaesthetic professional literature. Anaesthetists generally have a significant interest in this subject because context-sensitive half time influences the delay before patient awakening after wound closure, and therefore influences the time between cases (which in turn influences earnings). From a less cynical viewpoint, all their drugs are also of the "given as infusion" and "highly lipophilic" varieties. Hughes et al (1992) in Anesthesiology is probably the most useful resource, if one is somehow able to break through their paywall. Alternatively, one can go to the very source by reading Shafer and Varvel (also from the same journal but mirrored by harvard.edu).

In fact, by some completely amazing stroke of luck, this chapter was afforded the attention of Shafer from the abovementioned Shafer and Varvel paper, and has benefited massively as the consequence of his constructive input. In fact, most of the explanation section and the figures were donated by Steve Shafer, to whom I and the trainees of our college are grateful.

Definition of context-sensitive half time

The college have never asked about this directly, nor does the official college pharmacology text  mention it, so the CICM primary candidate lacks a "canonical" definition to cling to. Adrift, one turns to peer-reviewed publications. Fortunately this is a concept with a well-established authorship. Hughes Glass and Jacobs (1992) came up with it while trying to develop better pharmacokinetic models of short-acting opiate infusions. The model observed the decline of a central compartment opiate concentration, from 100ng/ml to 50ng/ml (i.e. a half-life). The time taken to achieve this 50% fall was referred to as "context-sensitive half time" by the authors, as a "practical allegory of postinfusion central compartment drug disposition". Paraphrased, their definition would probably read as follows:

Hughes et al take some steps to explain how their "half time" concept is not a "half-life", even though both concepts involve the concentration declining by 50%. e main reason for this is that if there is only a single compartment, then it always takes the same amount of time  for the concentrations to decrease by 50%, regardless of how the drug has been given (bolus, short infusion, long infusion, combinations of doses, etc). Put another way, drug does not accumulate in peripheral tissues for drugs described by a single compartment. This does not apply to anaesthetic drugs, which have significant accumulation in fat, muscle, and viscera. As a result, anaesthetic pharmacokinetics must be described using models with one or two peripheral compartments. For these drugs, the history of drug delivery is exceptionally important because it is the history of drug dose that determines how much drug has accumulated in peripheral compartments. The longer drug is given, the more drug accumulates in peripheral tissues, and the longer it takes to eliminate the drug at the conclusion of anesthesia.

To be even more precise, the authors deﬁned context-sensitive half-time in terms of a concentration declining from steady state, i.e. in conditions where the central compartment concentration is kept stable. In this speciﬁc paper they were describing a computer-controlled infusion of a drug which was designed to maintain a steady state in the central compartment, i.e. one in which the rate of infusion was adjusted over the duration of the infusion to account for the distribution of the drug into capacious storage areas of fat and tissue. "The input in each simulation was an infusion regimen designed to maintain a constant plasma drug concentration for durations ranging from 1 min to 8 h and until steady state", they reported. As shown in the ensuing simulations, using the “BET” dosing method results in a slightly longer estimate of the time for a 50% decrease than would be calculated from a simple constant-rate- infusion.

Explanation of context-sensitive half time

Medical school pharmacology classes teach the concept of “half-life”, the time it takes for plasma concentration to drop 50%. If the initial concentration is 10 units/ml, and the half-life is 30 minutes, than the concentration is 5 units /ml at 30 minutes, and 2.5 units/ml at 60 minutes. Half-life is a useful concept as long as there is only 1 half-life that describes drug concentrations. The problem is that exactly zero intravenous drugs used in anesthesia can be described with one half-life. Instead, they have two or three half-lives.

Let’s consider the case of propofol, using the pharmacokinetics reported by Schnider et al (1998)  for a typical adult man. According to this model, propofol has three half-lives: 1 minute, 16 minutes, and 300 minutes. How long will it take for the concentrations of propofol to decrease by 50%?
Computer simulations are necessary to answer this question. The simulation below shows the propofol concentrations for a bolus and infusions of 15, 30, 60, 120, 240, and 480 minutes. The X axis is minutes since the start of drug administration. The Y axis shows concentration as a percent of the peak concentration, since we are only interested in the time for a decrease of a certain percent. The simulation of the bolus injection appears in red, while the infusions appear in blue. 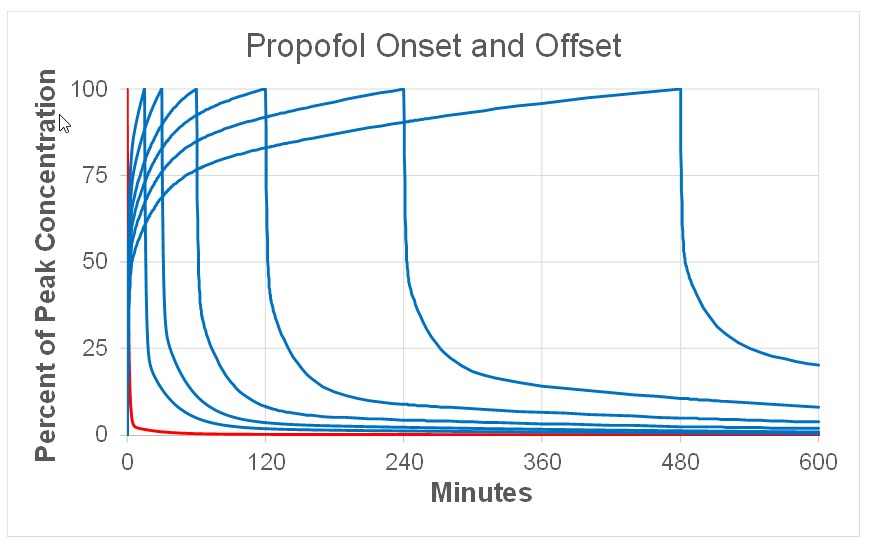 As can be seen, even giving propofol for 480 minutes, the plasma propofol concentration decreases by 50% within 5 minutes of stopping the infusion. The 300 minute terminal elimination half-life appears to be clinically irrelevant. In fact, even the intermediate half-life of 16 minutes appears to be irrelevant. Perhaps something different happens at “steady state”, when the apparent concentration of propofol in all body tissues has come to equilibrium.

The figure below just shows the offset of propofol concentration for a bolus (red line) and infusions of 15, 60, 120, 240, 400, and infinite minutes (steady state), respectively. 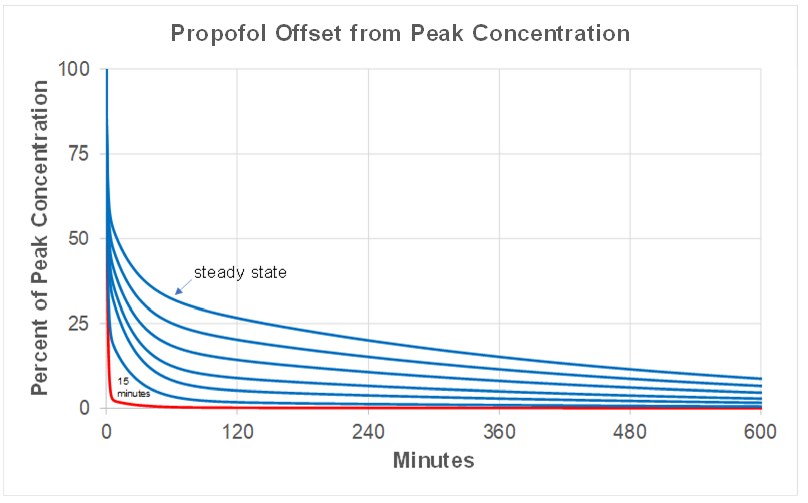 Even at steady state, the propofol concentrations decrease by 50% within 10 minutes of ending an infusion. The concept of half-life clearly can’t help clinicians predict how quickly drugs are eliminated from the plasma. This is the basis for the concept of context-sensitive half-time.

It takes slightly longer for the concentrations of propofol to decrease by 50% when the infusion stops. The figure below documents this relationship for propofol infusions from 1 to 600 minutes: 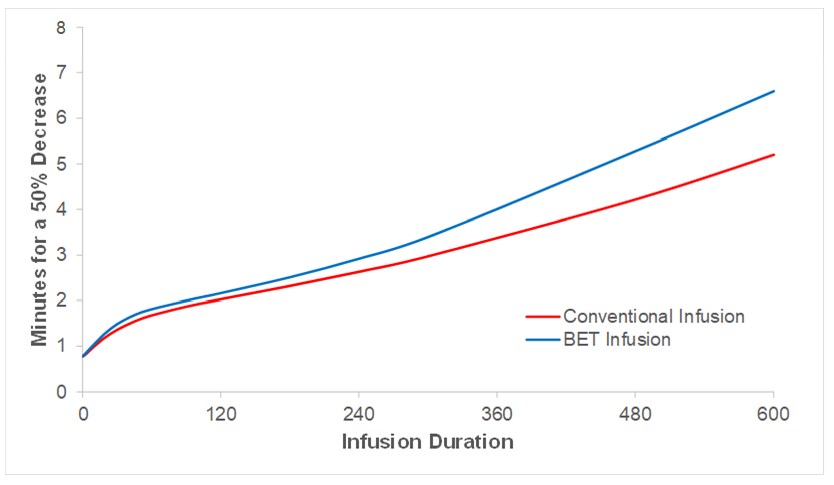 This shows the basic concept of the context sensitive half-time. The red line shows how the time for a 50% decrease in concentration increases as a function of the duration of the infusion. The important concept is that this isn’t a number, it is a relationship. The “context” is the duration of drug administration. As every anaesthesitist knows from clinical experience, the longer you give drug, the longer it takes the body to remove the drug at the end of anaesthesia. The red line for a conventional infusion is close to, but not exactly the same, as the context sensitive half-time. The reason is that the relationship as originally presented by Shafer and Varvel, and then formally defined by Hughes et al, assumes an infusion that maintains a steady state concentration, the “BET (bolus, elimination, transfer) infusion. This is close to a standard infusion, but was intended to be more general as an approximation of whatever the anesthesiologist does in an attempt to maintain a steady drug concentration. The actual context-sensitive half-time is shown by the blue line.

Determinants of context-sensitive half time

The primary determinants of the context-sensitive half-time are:

Drugs with small central volumes and rapid clearances are rapidly cleared, regardless of the size of the peripheral compartments and how long the drug has been administered. Remifentanil is an excellent example. Remifentanil accumulates in peripheral tissues during drug administration, but the clearance is so fast that remifentanil accumulation is very nearly irrelevant to the speed of recovery. Drugs with large central volumes and slow systemic clearance will be eliminated much more slowly. In these cases, the effects of accumulation become much more profound. An extreme example of this is amiodarone, where months of dosing history must be considered in amiodarone titration.

Context-sensitive half time in practice

In the simplest sense, the CSHT can be expressed as "the longer the infusion has been going, the longer it will take for the drug eﬀect to wear oﬀ". The initial example demonstrates this for propofol. It is also worth noting that all drugs have a maximal context-sensitive half-time, which can be readily calculated from the pharmacokinetics. This maximal rate is generally at least an order of magnitude faster than would be guessed from the terminal elimination half-life alone.

It is important to point out also that the 50% decrement is completely arbitrary, i.e. there is nothing special about the 50% mark. In fact, other concentrations may be more important clinically. For this reason, Shafer et al represented multiple curves for each drug. Consider their graph for fentanyl, presented below (the CSHT is on the y axis). The time for a 50% decrease looks to be about 40 minutes; but then another 40 minutes pass before you get to a 60% decrease in plasma concentration. 70% isn't even on the chart. This obviously has clinical relevance (eg. for respiratory effort and extubation readiness). 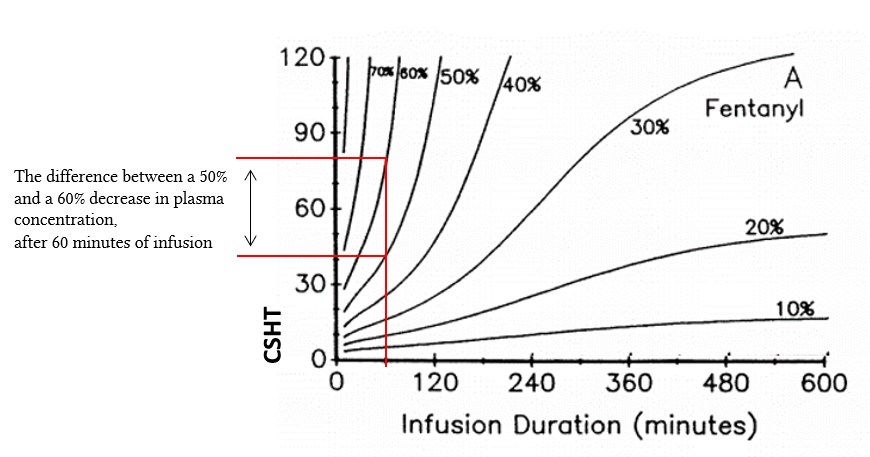 Hughes et al (1992) actually have an often-repeated graph of different drug context-sensitive half times, which remains relevant almost 30 years later. This is reproduced below with zero modification and no permission whatsoever. According to Peck and Hill's textbook, propofol has a maximal context-sensitive half time of approximately 20 minutes. Fentanyl, on the other hand, has a maximum CSHT in excess of 300 minutes. A classical 1991 paper by Shafer and Varvel is available for your reading pleasure from the Harvard Medical School. It is classical because virtually every primary exam-level anaesthetics textbook has reproduced their figures, and anaesthetics trainees are expected to at least discuss those figures during viva exams (if not reproduce and label them from memory).  It is an excellent review of the clinically relevant aspect of context-sensitive half time in terms of recovery from opiate infusion. More discussion of their work takes place in the chapter on effect-site concentration.

There is no reason as to why we should be specifically interested in the arbitrary 50% fractional reduction, aside from teaching the mathematical concept at the level of a primary exam. Because it takes a lot of assumptions to translate the context-sensitive half time concept into something clinically meaningful, pharmacokinetic modelling by clever software should be able to ultimately surpass this largely theoretical concept in clinical utility. Shafer has developed an online instrument (stanpumpR) which can be used to model the pharmacokinetics of infusions and determine how long it would take to achieve a clinically relevant effect (eg. awakening) after an infusion is ceased. The wider availability of such simulations may ultimately make the concept of context-sensitive half time into an increasingly irrelevant sidenote in clinical practice.

Schnider, Thomas W., et al. "The influence of method of administration and covariates on the pharmacokinetics of propofol in adult volunteers." Anesthesiology: The Journal of the American Society of Anesthesiologists 88.5 (1998): 1170-1182.