This chapter answers parts from Section B(v) of the 2017 CICM Primary Syllabus, which expects the exam candidate to "describe the mechanisms of drug clearance and metabolism". One of the possible interpretations of this broad learning objective is some understanding of the concepts of first and zero-order elimination kinetics, which are fairly fundamental in pharmacokinetics.  In the historical Part I exam papers, the only appearance of these concepts was in Question 5(p.2) from the second paper of 2009. The candidates were expected to "explain the difference and the clinical relevance" between first and zero order elimination. The question was passed by only 22% of the candidates that year.

The official college pharmacology text  (Birkett et al, Pharmacokinetics Made Easy - 2009) discusses first order kinetics briefly as a part of discussing the elimination rate constant (p.30 -31). Zero order and mixed elimination kinetics get a mention around p 80, in the chapter on on-linear pharmacokinetics (Chapter 9).  Generally speaking these resources should be enough to write a competent answer to Question 5(p.2) from the second paper of 2009. as well as to mutter something sensible during a viva station. Realistically, what could they possibly ask about this? Nothing unpredictable. At worst, one could be asked to draw a labelled graph, explain the major differences and give examples.

A definition of this concept can be borrowed from the college answer to  Question 5(p.2):

"First-order kinetics... is where a constant fraction of drug in the body is eliminated per unit of time"

This is a logarithmic function. All enzymes and clearance mechanisms are working at well below their maximum capacity, and the rate of drug elimination is directly proportional to drug concentration. 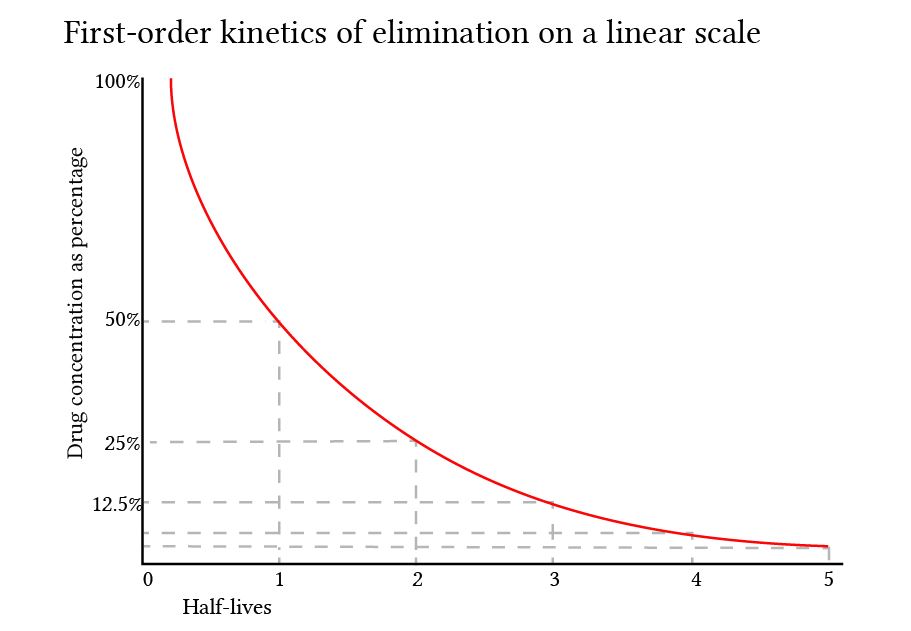 The drug concentration halves predictably according to fixed time intervals. When you plot this on a semi-logarithmic scale, the relationship of concentration and time is linear. If you plot the relationship of concentration vs. elimination rate, the same sort of linear relationship is seen: 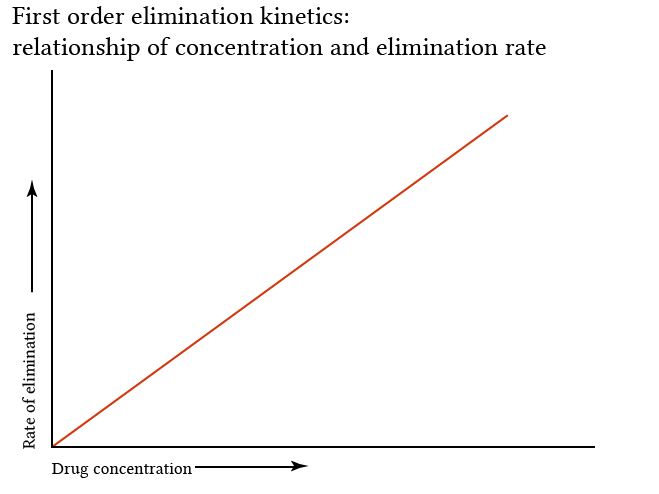 The term "first order" actually comes from chemistry, where is has classically been used to describe reaction kinetics. When doubling the concentration of reagents also doubles the reaction rate, the increase in rate is by a factor of 2 (2 to the first power, or 21). That "first power" gives rise to the term "first order". In that fashion, one can have a "second order" reaction where doubling the concentration of reagents quadruples the reaction rate (i.e 2 to the second power, 22). Following this trend in nomenclature to its most absurd extent, third-order fourth-order and fiftieth-order reactions can be conceived of.

In chemistry, when doubling the concentration of reagents has no effect on the reaction rate, the increase in rate is by a factor of 0 (i.e. 20). This is zero-order kinetics. The relationship of concentration to reaction rate can therefore be plotted as a boring straight line: 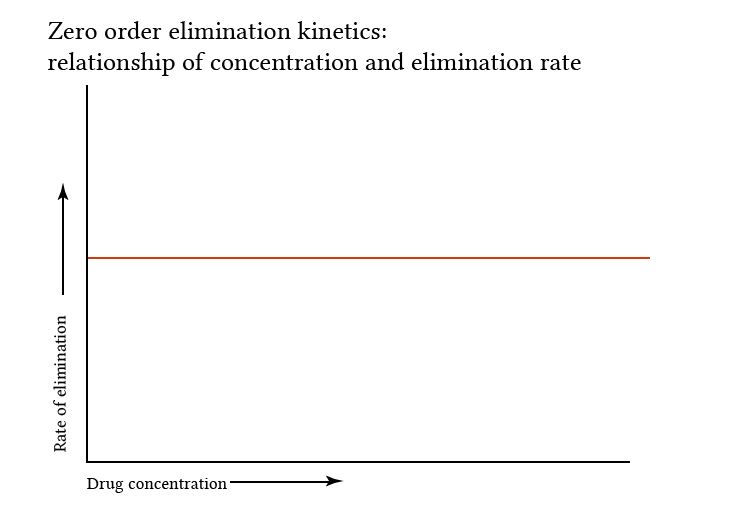 Or at least that's how it is presented in most pharmacology textbooks, and notably in Birkett's Pharmacokinetics Made Easy. However, it is Made Easy only by omitting certain inconvenient details in an attempt to protect the reader's mind from the cosmic horror of realising that there is no such thing as zero order kinetics.

That's right. This perfect straight line is in fact a thought experiment, and that in reality, there can never be any such situation. The activity of an enzyme working on a substrate is described as a hyperbolic curve, and as substrate concentration increases, the rate of reaction approaches a maximum valocity asymptotically. However, it can never become a true flat line, unless the concentration of the substrate is actually infinite. Ergo, no elimination function can ever truly be "zero-order" and every "zero-order" example you are given in textbooks is a functional approximation, including the classic example of alcohol.

The CICM trainee who has passed their sanity roll and safely absorbed this concept would be advised to keep it to themselves during their exams. It is likely that the examiner facing off aginst them in their viva or written paper will not be a pharmacokinetics expert, and will have no patience for this sort of discussion. An argument about pharmacokinetics would be a foolish reason for failing a viva, or being escorted off the premises by security.

In the realm of pharmacokinetics, "reaction rate" is elimination of the drug, by whatever clearance mechanisms (some of which might actually involve reactions). Generally speaking first-order kinetics can describe clearance which is driven by diffusion; diffusion rate is directly proportional to drug concentration. If there is a functionally inexhaustable amount of metabolic enzymes available, the reaction will also be first order (i.e. the more substrate you throw at the system, the harder the system will work). However, if there is some limit on how much enzyme activity there can be, then the system is said to be saturable, i.e. it is possible to saturate the enzymes to a point where increases in concentration can no longer produce increases in enzyme activity. This gives rise to non-linear elimination kinetics, known by the uninformatively eponymous  term "Michaelis-Menten elimination".

This concept can be described by the unimaginatively named Michaelis-Menten equation, which relates the rate (velocity, V) of a reaction to the concentration of the substrate (lets call it "drug"). A maximum rate of reaction is reached when drug concentration achieves 100% enzyme saturation. Beyond this concentration, clearance will be zero-order.  The maximum rate of reaction in this instance is called Vmax (i.e. maximum velocity). The concentration required to achieve 50% of this maximum reaction rate is called Km, where K presumably stands for Konzentration because everything in science was named by the Germans.

The graph of the enzymatic reaction rate to drug concentration looks a little like this: 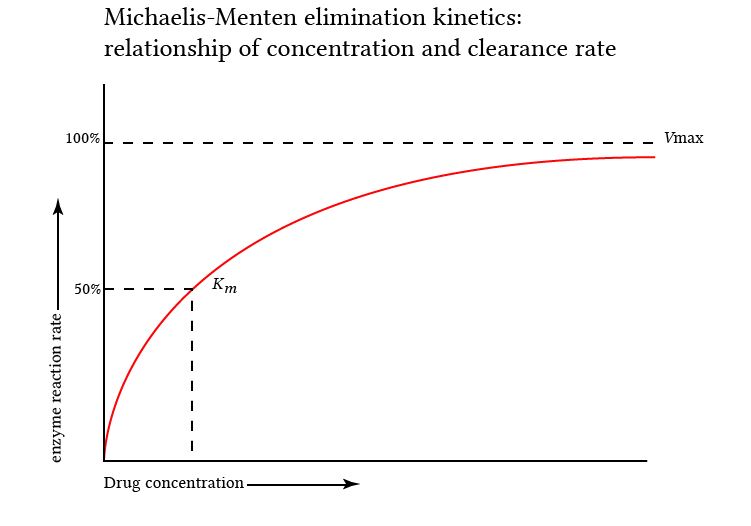 Thus, when the patient is receiving regular doses of the drug, if the concentration is already high then relatively small changes in the dose will produce a disproportionately large change in drug concentration. The college answer to Question 5(p.2) from the second paper of 2009 specifically nominates Km as the magic cut-off for where therapeutic index becomes narrow. In other words, if the drug concentration required to produce a useful effect is above the concentration required for 50% of Vmax, then the drug will have a narrow therapeutic index. It is true (it makes logical sense) but it is not clear where the examiners got this from.

Obviously not all livers are the same. The liver of a veteran alcoholic will be able to metabolise substantially more whiskey than the liver of an average nun.  In short, there will be variation in the population depending on the Vmax of their clearance organs, and everybody's organs will max out at different concentrations. Gentamicin as a model of first-order elimination kinetics

This drug is not metabolised by any saturable enzymes. Its elimination is nothing fancy: it just ends up in the urine at a rate which is proportional to its concentration. In fact it is one of the few drugs which can Goncalves-Pereira et al (2010) were able to generate some nice classical looking curves in their study: Ethyl alcohol as a model of zero-order elimination kinetics

Even though many (Wagner et al, 1976; Holford, 1987) have raised the objection that logically, there can be no such thing as "zero-order" elimination, it remains in the textbooks, and ethanol remains the default example. It is particularly interesting to the intensivist because of the extreme fondness for it among the intensive care community.  Rangno et al (1981) were able to plot some excellent "zero-order" elimination curves for IV-infused ethanol (a) and oral doses (b) among eight healthy male volunteers whom they lured into the experiment with the promise of booze. The high-dose group got fairly sozzled with a dose of 1.25g/kg, which for a 70kg male would be 87.5g (almost 9 standard drinks, more than a full bottle of wine), reaching a blood alcohol concentration of 0.2% - four times over the Australian legal driving limit. Across all normal dose ranges, ethanol elimination appears to be quite linear, and independent of concentration. As seen from the graph above, the gradient of diminishing concentration over time from a high concentration is the same as that from a low concentration. This is because the dose consumed is typically quite high (i.e. it is a low potency drug), and so, though this is not exactly an "infinite substrate availability" situation as mentioned above, there are so damn many of those molecules that functionally that's exactly what it resembles.  The enzymes responsible for its clearance in the normal person are saturated with the first drink; the Km of alcohol dehydrogenase for ethanol is about 1mmol/L (Cederbaum, 2012).  The Vmax for alcohol ends up being about 7-10g/hr. It would therefore take an average person approximately 28 hours to completely metabolise one whole bottle of vodka, which explains some of the adverse functional effects seen during the subsequent morning.

Interestingly, the Km of alcohol dehydrogenase for other alcohols is much higher; the metabolism of methanol and ethylene glycol therefore proceed according to first-order kinetics. Of all the many isoforms of alcohol dehydrogenase, none show a preference for ethyl alcohol. It clearly has never been high on the list of metabolic priorities, as far as evolution is concerned.

Phenytoin as a model of nonlinear elimination kinetics

Phenytoin is the classical poster child for non-linear elimination kinetics, because the enzyme saturation point is reached somewhere in the middle of the therapeutic concentration range. The excellent 1979 article by Alan Richards contains within it a famous graphic representation of the changes in phenytoin concentration among a group of epileptic patients. Incontrast to this author, Richards had permission to reproduce it from Richens & Dunlop (1975). In summary, it is important only ever make small dose adjustments with this drug, and other drugs like this drug.