This chapter is vaguely relevant to parts from Section B(v) of the 2017 CICM Primary Syllabus, which expects the exam candidate to "explain the concepts of intravenous bolus and infusion kinetics". Loading doses and maintenance doses have some practical relevance to these concepts, and the design of a dosing regimen requires some understanding of them. However, neither the new 2017 syllabus nor the old 2014 syllabus included anything specific about dose calculations in their list of learning objectives or expected abilities. It therefore seemed all the more unfair when Question 10 from the first paper of 2009 asked the candidates to "describe the calculations involved in determining the loading dose and maintenance dose for an intravenous infusion". The pass rate was 30%; "main points for a pass included the equations for determining the loading and maintenance doses." To address this injustice, this chapter will present those equations up front before degenerating into characteristic gibberish.

For IV drugs given by infusion,

For drugs not given IV, these doses need to be divided by the bioavailability.

Apart from equations, "points were awarded for explaining the rationale for giving a loading dose and for relevant diagrams", as well as examples of drugs. All of this is offered below.

Even though Birkett's 1996 article for the Australian Prescriber is virtually identical to the 2009 book chapter (and is available for free), one might still for some reason want to read other things. This is probably a waste of time if it is happening on the night before the exam. However, in the spirit of encouraging bad behaviour, some alternative peer-reviewed resources can be suggested. One could do worse than the 1982 Dosage regimen design by DeVane and Jusko. There are also decent articles by Williams (1992) and Thompson (1992)  Neither is available as free text, and so one would need to engage in some level of institutional access whoring or some sort of darkweb shenanigans to get hold of them. Freely available articles include Thomson (2004) and Mehvar (1998). 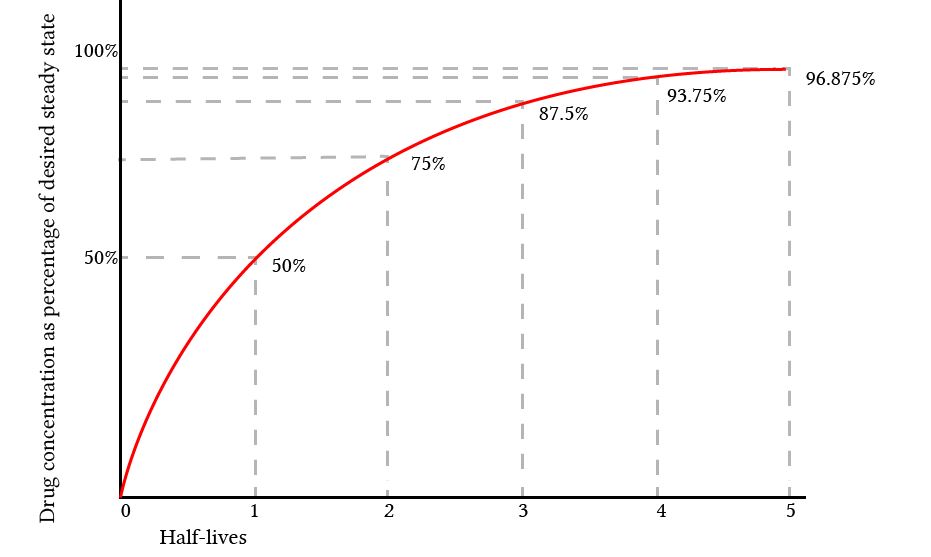 As discussed in the chapter on half-life, this is because increasing drug concentration usually results in a more rapid rate of elimination, and eventually the plasma drug concentration reaches a point at which the dose rate and the clearance rate are equal.

In regular doses, drug concentration achieves a steady state in steps, but the end result is the same - the  plasma drug concentration reaches a point at which the dose rate and the clearance rate are equal after about five half-lives.

This is probably ok for a drug which is expected to have some sort of long-term effect, but if you are waiting for something critically and immediately important (pain relief, control of AF etc) you probably can't afford to spend five days patiently watching the concentration increase. This is where the loading dose comes in.

A loading dose rapidly achieves the peak concentration necessary to compete with clearance, so that the desired effect is achieved and maintained sooner. In the context of infusion, the same sort of kinetics are observed. The concentration/time graph resembles some mutant fusion of the bolus graph and the continuous infusion graph. Steady state and the therapeutic effect are achieved much sooner. There are some practical problems with using a loading dose. If a drug has a high volume of distribution, the loading dose to achieve steady-state concentration may be impractically large. Birkett et al (2009) gives the example of phenobarbitone, where the loading dose would be a lethal 1.5g.

As the examiners expect graphs and examples, it might be helpful to illustrate the abovediscussed points using something which is a combination of both. This is a graph of vancomycin concentrations, comparing intermittent dosing with continuous infusion. The graph comes from Wysocki et al (2000); they targeted trough levels of 15mg/L and maintenance levels of 20-25mg/L. Observe the high peak following the loading dose, followed by the gradual approach to steady state. Factors which influence the dosing interval

The dosing interval clearly plays some sort of role in the pharmacokinetics of intermittent dosing. The major factors involved in deciding on how often one should dose the drugs should be determined by the following factors:

The longer the dosing interval in proportion to half-life, the greater the fluctuation of concentration between doses. Consider gentamicin. The peak level is very high, and the trough is very low in once daily dosing. Fortunately this favours gentamicin, which has a potent post-antibiotic effect. Other drugs will be different. If the therapeutic index is narrow, dosing the drug too infrequently will give rise to alternation periods of toxicity and ineffectiveness.

Generally speaking, for most drugs, the dosing interval is approximately one half life.

Question 10 from the first paper of 2009  asked, "What factors may affect these values [calculations involved in determining the loading dose and maintenance dose for an intravenous infusion] in the critically ill? In order to supply the exam candidates with a pre-chewed half digested answer, these are listed below. In short, maintenance dose and loading dose calculations are mainly dependent on clearance rate, volume of distribution and bioavailability.

The college examiners helpfully reminded us that "examples of drugs illustrating an understanding of pharmacokinetics attracted extra marks". To use the official textbook examples seems appropriate, because how could that ever be wrong. In addition to these, the excellent article by Blot et al (2014) uses some antimicrobial agents to illustrate critical illness-related changes in pharmacokinetics.

The following memorable illustrative examples should be committed to storage and then regurgitated upon the examiners:

Blot, Stijn I., Federico Pea, and Jeffrey Lipman. "The effect of pathophysiology on pharmacokinetics in the critically ill patient—concepts appraised by the example of antimicrobial agents." Advanced drug delivery reviews 77 (2014): 3-11.

Reuning, R. H., R. A. Sams, and R. E. Notari. "Role of pharmacokinetics in drug dosage adjustment. I. Pharmacologic effect kinetics and apparent volume of distribution of digoxin." The Journal of Clinical Pharmacology13.4 (1973): 127-141.