Functional anatomy of the kidneys

This chapter is vaguely relevant to the aims of Section H3(i) from the 2017 CICM Primary Syllabus, which expects the exam candidate to "describe the functional anatomy of the kidneys". Don't worry, CICM have never dedicated a full written exam question to this topic, and hopefully never will, because the question as phrased above would be rather unfair. It did appear just twice, as 40% of Question 18 from the first paper of 2017 and as a minor part of  Question 21 from the second paper of 2011, which was successfully answered by only 4% of candidates.

"Functional anatomy" in its broadest sense can be defined as an answer to the question, "how does the way this thing looks relate to the way this thing works?" That might be reasonably straightforward for other organs; the heart, for example, constantly flaps its valves in a logically pleasing way, and clearly looks built to fulfil the mechanical objectives of a hydraulic pump, making its functional anatomy easy to explain. No so for the kidney, a solid bean-shaped organ in your upper abdomen which does not do anything visually exciting in the course of doing its job. Fortunately, several resources are available to explain how kidney structure and kidney function fit together, some of which are literally titled "Functional Anatomy of the Kidney". For instance, there's Kaissling & Dørup (1995), Tisher (1978), Schafer (2003), or Sands & Verlander (2010). The latter is particularly good, but unfortunately not available for free. All effort was made to distil the wisdom of these authors into the short summary below.

Anatomical relations of the kidneys

As with everything involving anatomy for the intensivist, the author maintains that detailed anatomical images are useless. In any case, this would have to be a very low yield area for revision, but in the event that somebody somewhere needs this information, a table is offered.

The innervation thing is probably worth expanding on a little bit. When a renal transplant is performed, the graft is obviously disconnected from these sympathetic fibres, which means the recipient is no longer able to directly coordinate their RAAS using their own sympathetic nerves. Fortunately, there's plenty of circulating catecholamines, and there are other mechanisms of triggering renin release.

Structural organisation of the renal cortex and medulla

In short, the kidney is organised into a cortex and medulla. The cortex has a labyrinth and medullary rays, and the medulla has an inner stripe and an outer stripe. For the purpose of describing this, there is no better image than Netter (N325). This version was misappropriated from Duke University, who presumable stole it from Elsevier: 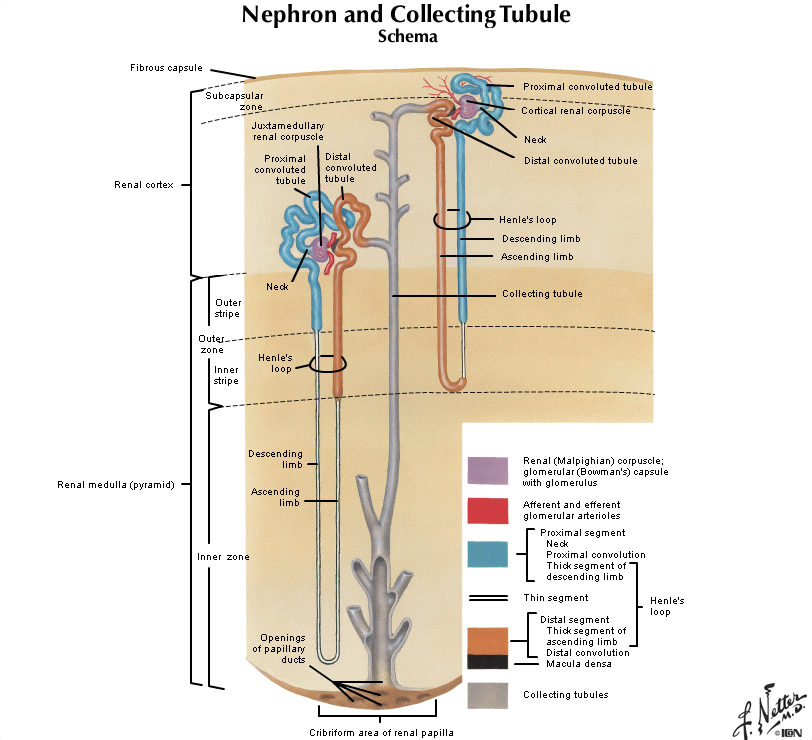 This Netter original appears to have been copied by several others, resembling numerous other images of the nephron -  including this one from Sands & Verlander (2010), this one from Wikipedia, this one from Clin. Journ. Am. Soc. Neph.,  or Scheme of nephron from Kriz et al (1988). Not to be outdone, Deranged Physiology's homebaked version of it is also plagiarised here, if only to make it easier for the author to cut a busy diagram into bite-sized chunks.

Nomenclature for the structural elements of the kidney

Most of what follows is based on Kriz et al (1988). That was a consensus statement by the IUPS, published simultaneously in three medical journals in order to maximise the exposure of the scientific community to a definitive position on kidney structure, and specifically on what we should name all the various bits of the renal macro and microstructure. Altered fragments of their original diagram will be used in the rest of this discussion for educational purposes, which the author still deludes himself that this website somehow serves.

Cortex is what you call the outermost area of the kidney, i.e. that bit which is closest to the capsule. This is the business end of the kidney, which contains most of the physiologically active areas. The outermost area (subcapsular zone) is devoid of glomeruli and only contains the proximal tubules or cortical nephrons. This area used to be called cortex corticis, "the cortex of the cortex", but this name seems to have fallen into disuse.

The cortical labyrinth is most of the cortex. It is so called because its histological appearance is that of endlessly winding hollow structures which would make it a suitably complex home for a minotaur or a pop idol. Here's an example of a cortical labyrinth from a mouse, lovingly scanned and rendered in 3D by Torres et al (2016): 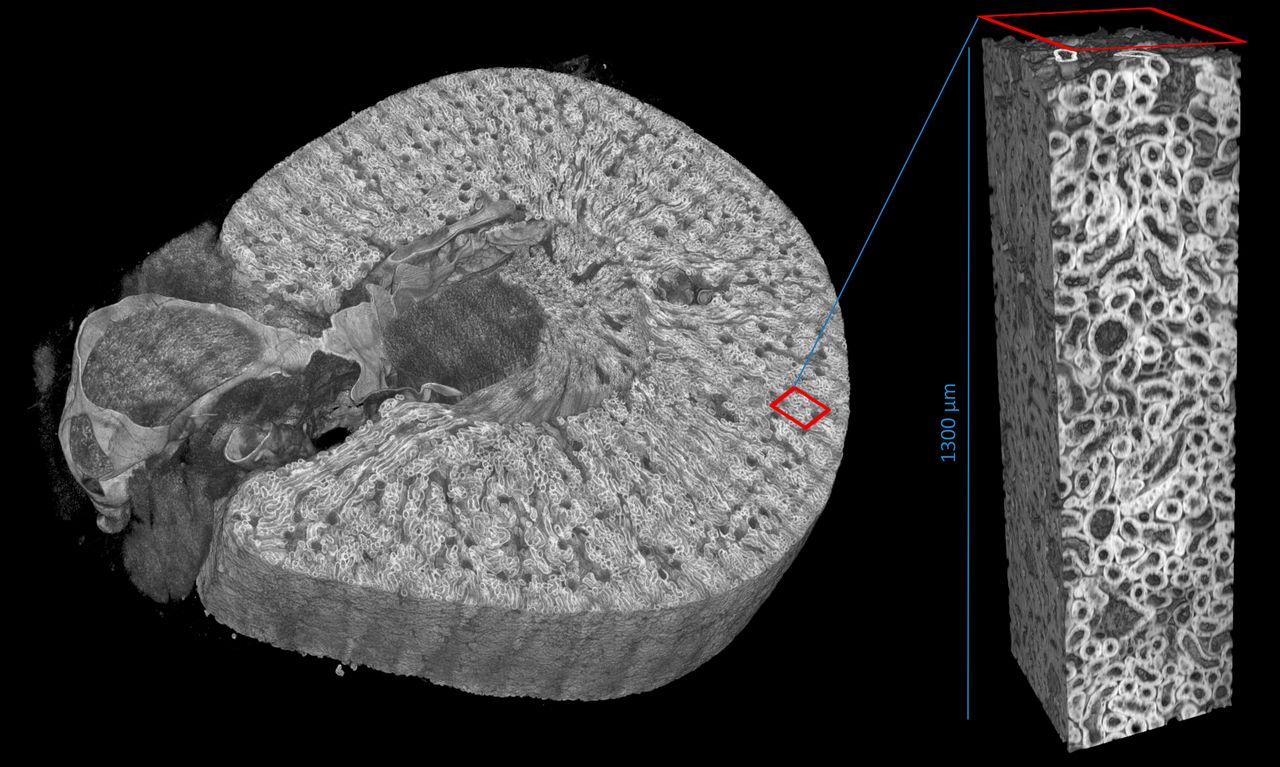 As you can see, it is the landscape of hell.  This area contains:

It occupies the outermost part of the Netter diagram:

To simplify matters, the labyrinth is where you find all of the convoluted structures in the nephron. If it has "convoluted" in its name, it is probably found in the cortical labyrinth, which makes some logical sense if you think about it.

The medullary rays of the renal cortex are finger-like outward projections of the medulla into the cortex. They are basically bundles of tubules, which hang out of the cortical labyrinth; specifically straight non-convoluted ones: 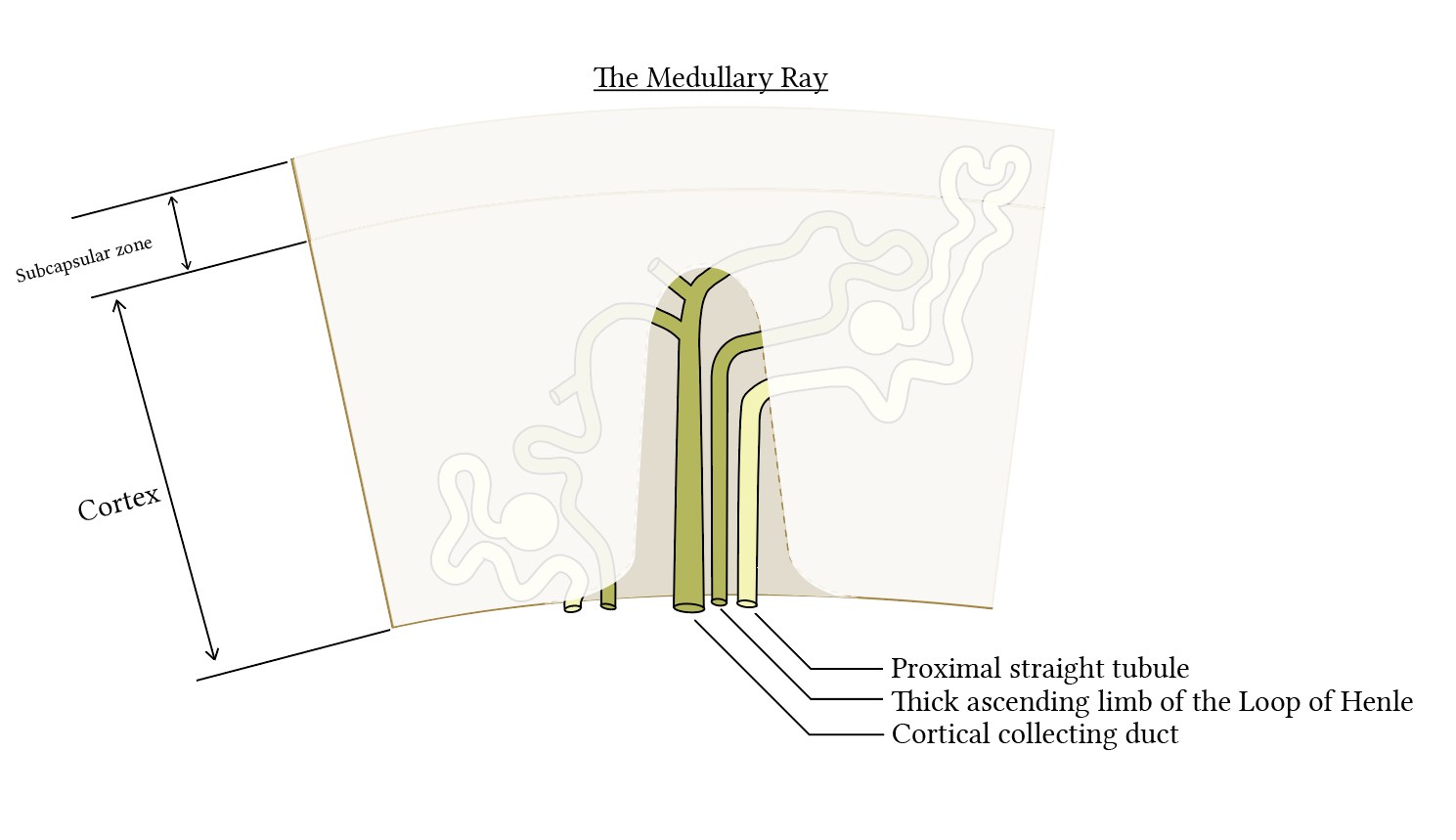 These are rays to the medulla, but they are cortical structure, which makes the name "medullary ray" somewhat misleading. From here, the loops of Henle and collecting ducts descend through the medulla, and they are arranged in parallel, which makes them histologically more organised than the mad chaos seen in the rest of the cortex.

The renal pyramids, otherwise known as Malpighi's pyramids, contain the medulla. These are conical structures with their broad base sitting on the cortex and their narrow apex pointing inwards, at the renal pelvis. 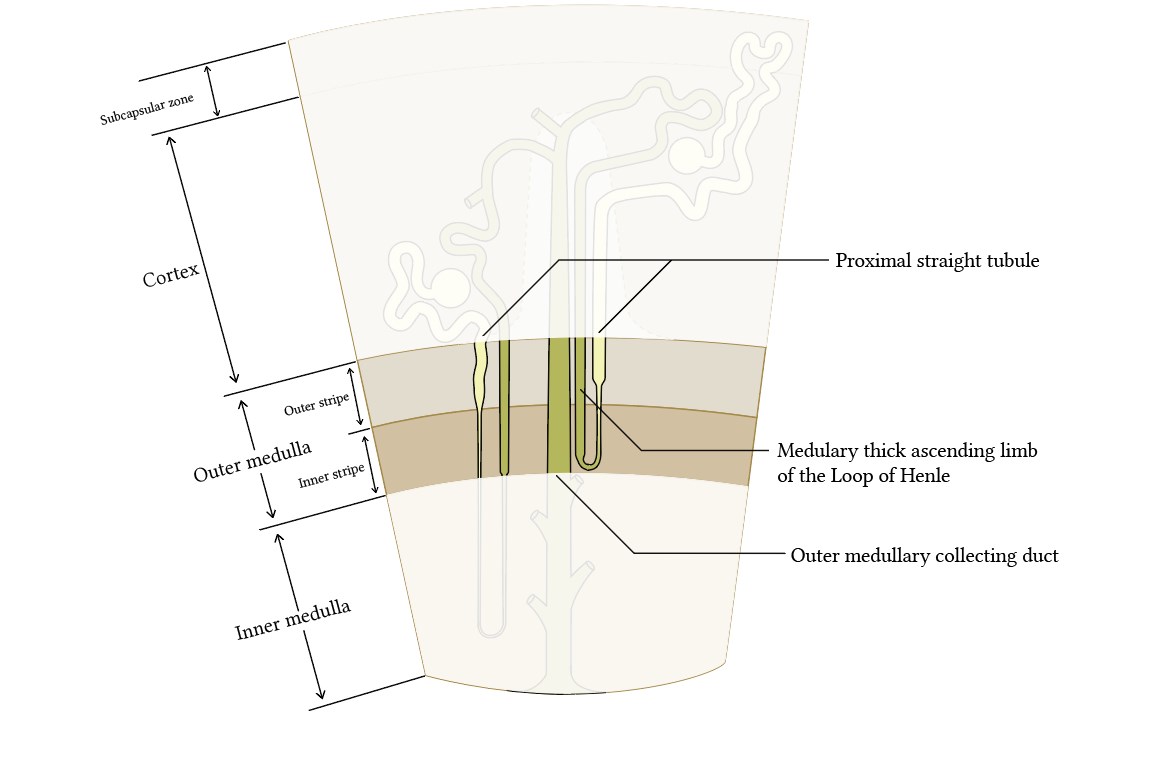 As you might notice, these are basically exactly the same structures as you might have seen in the medullary rays, except these are no longer in the cortex, which means you can no longer call them "cortical". Hence "medullary" collecting duct.

Inner medulla forms the apex of the renal pyramid, and contains:

The innermost bit of the inner medulla forms the renal papilla. The name "papilla", meaning "wart" or "nipple", reflects that the inner portion of the medulla projects into the urine-containing space of the calyx. The tips of these protruding papillae contain the openings of the ducts of Bellini, also known as papillary ducts. There are about 12-15 of these papillae in the normal human (Habara et al, 1994), and only one in a normal rat.

A renal fornix is the depression formed between these projecting papillae. Apparently fornices help the overall process of concentrating the urine by increasing the surface area of the urinary collecting system. These surfaces are lined by a single layer of low cuboidal epithelium, which means they should be reasonably water-permeable.

Ducts of Bellini,  or papillary ducts, are the final common pathway for urine. They are named after Lorenzo Bellini, the court physician to Duke Cossimo di Medici whose useless leadership had basically bankrupted Tuscany in the early 1700s. He was the first to describe these ducts, which open into the tips of the renal papillae and empty urine into the renal pelvis. About six nephrons on average drain into one collecting duct, and multiple collecting ducts merge into one papillary duct, and about twenty papillary ducts open at the tip of each papilla, creating a cribriform ("sieve-like") area.

Renal pelvis is a slightly flattened widened end of a ureter. Apart from the fact that it narrows, catching calculi, there is nothing else interesting about this tubular structure.

So: these structural elements are present in most mammalian kidneys, and though the boundaries overlap somewhat (as organic structures are not fond of hard geometric borders), the overall structure is generally well demonstrated in all kidneys, i.e. these inner stripes and outer stripes are not imaginary distinctions. Here's a mildly altered 3D reconstruction of about 200 mouse nephrons, created by Zhai et al (2006) from 2.5 μm serial sections of mouse kidneys. 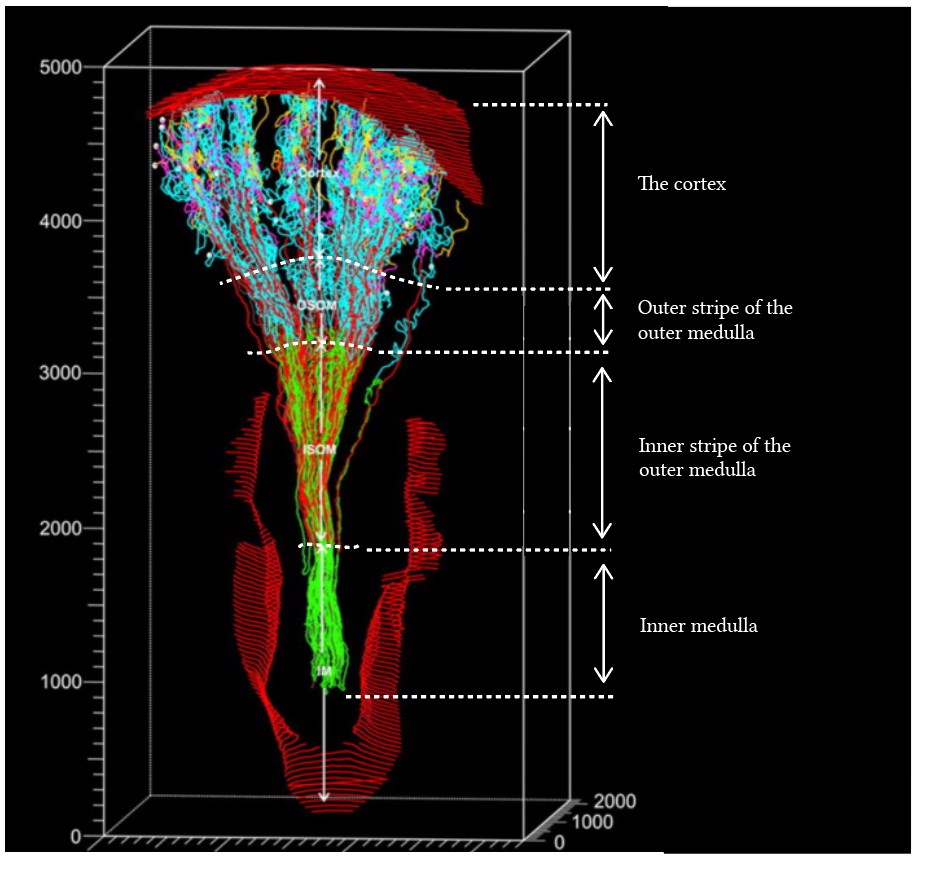 Heterogeneity of the nephrons

Most everything in the renal physiology will at one stage or another make some reference to the nephron, so it is worth defining this term here: "The nephron is the basic functional unit of kidneys that consists of a glomerulus and its associated tubules" (Zhou & Li, 2013). There's apparently some disagreement whether the cortical and medullary collecting ducts should be considered a part of the nephron, as their embryological origin is not the same as the rest of the tubules and glomerulus. Whatever the case may be, it is still convenient to discuss all these structures together as a single functional unit.

Anyway: nephrons come in all shapes and sizes. Kriz et al (1988) list superficial, midcortical, juxtaglomerular, short-looped and long-looped nephrons. As a general rule, superficial nephrons (those on the outermost rim of the cortex) are short-looped, whereas juxtaglomerular nephrons have long loops of Henle (going all the way into the inner medulla), and are thought to contribute the most to the process of producing concentrated urine.

Structure of the nephron

The functional anatomy of this basic unit of kidney is sufficiently interesting to merit its own chapter. In summary, the essential structural elements of the nephron are:

Nobody knows where to put the Ducts of Bellini, as embryologically they arise from the same tissue as the ureter, which strictly speaking makes them a part of the genitourinary system.

Structure of the renal blood supply

The blood supply of the kidney is discussed in detail elsewhere. Here, it will suffice to reproduce the excellent diagrams from "Structural organisation of the mammalian kidney" by Kriz & Kaissling (1992): 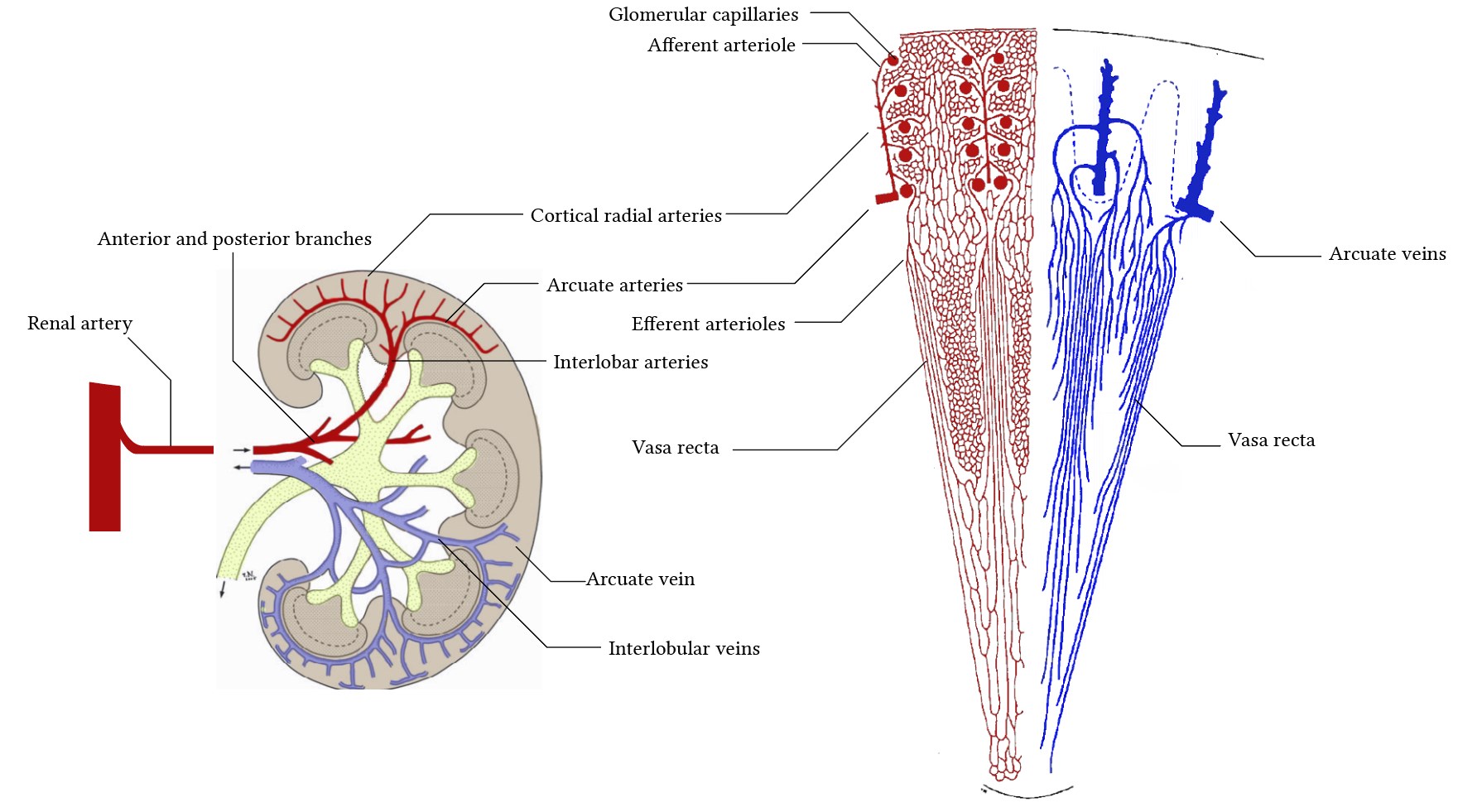 In summary, the arterial and venous circulation of the kidney can be presented as a sequential list of vessels:

This system has several unique features:

The grindy fetch quest that is medical school will surely have left the CICM trainee with at least one random anatomy book in the clutter of their inventory, and they are referred to this resource, as they should all contain essentially the same information about the kidneys.

McCrorey, H. Lawrence. The Functional Anatomy of the Kidney. University of Vermont, Office of Instructional Resources, 1972.