The counter-current mechanisms in the kidney

This chapter seems relevant to the aims of Section H3(iii) from the 2017 CICM Primary Syllabus, which expects the exam candidate to "explain the counter-current mechanisms in the kidney". This is a popular choice for renal questions in the CICM First Part exam, and trainees are encouraged to compose a ready answer because the subject is complex enough to bury the unprepared candidate. For example, the college comments from 2011 record that though some candidates "elected to draw the loop of Henle and vasa recta... and answer the question from it", it was a hilariously doomed approach because "mistakes in these diagrams only confused their answers further". In short, be clear about what you plan to say about the countercurrent mechanism.

Representative questions from the past papers include the following:

The usual wording is "explain" or "describe", which are apparently direct synonyms because the examiners' expectations are the same for each. To facilitate rapid revision, the following short explanation/description is offered:

There is vast amounts of literature to describe this mechanism, in the shape of simple words, pictures, video, spoken word performance and parlour game. Sidestepping the most obvious question ("why did you decide you needed to add another resource"), the single best peer-reviewed article on this subject is Pallone et al (2003), being free and written in an accessible way.

An explanation of the countercurrent mechanism in the kidney

"A countercurrent system is a system in which the inflow runs parallel to, counter to, and in close proximity to the outflow for some distance", helpfully offers Ganong. In fact, this is the definition that appears countless times across different sources, producing the impression of legitimacy through consensus. To explain this highly dynamic mechanism would probably benefit from some sort of moving pictures, but this famously obstinate author refuses to record sound and video, leaving only static media. Using words and images to explain something like this would obviously require an abundance of both.  To make matters worse, the death of Adobe Flash has laid to waste vast ranges of the internet, among which were some extremely helpful animations.  Thus, for lack of a better option. another sequence of U-shaped tubes is produced for the reader, which has no clear advantage over any other similar sequence of tubes. 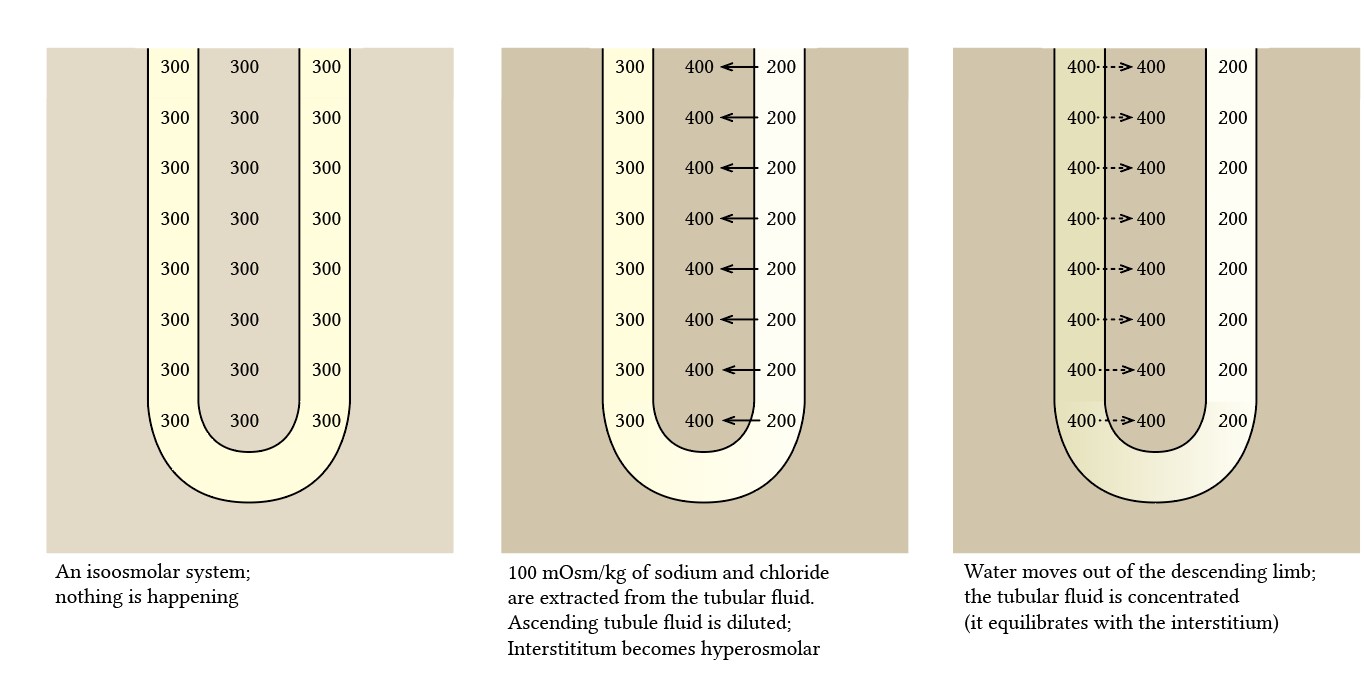 This whole scenario - where solute extraction from the ascending limb leads to increased interstitial osmolality and water extraction from the descending limb - is generally referred to as the single effect. The term is not used consistently in the literature, but appears in papers often enough for it to seem like it is A Thing in renal physiology. It seems to date back to the very earliest representation of this countercurrent process by Werner Kuhn and Kaspar Ryffel in 1942. In their paper, they referred to an Einzeleffect which seems to require Vervielfältiguüg (duplication or multiplication) in order to produce the observed concentration gradient. The countercurrent multiplication of this one ion-pumping effect is the origin of the medullary concentration gradient, they posed; and it appears later authors have reproduced the terminology in English without any modification

So, let us now add some new fresh glomerular filtrate, to produce a countercurrent flow and multiply this "single efect":

Countercurrent multiplication of the single effect

The countercurrent flow here refers to the fact that flow in the ascending and descending tubules is happening in opposite directions. In contrast, concurrent flow would be flow going in the same direction down both vessels. 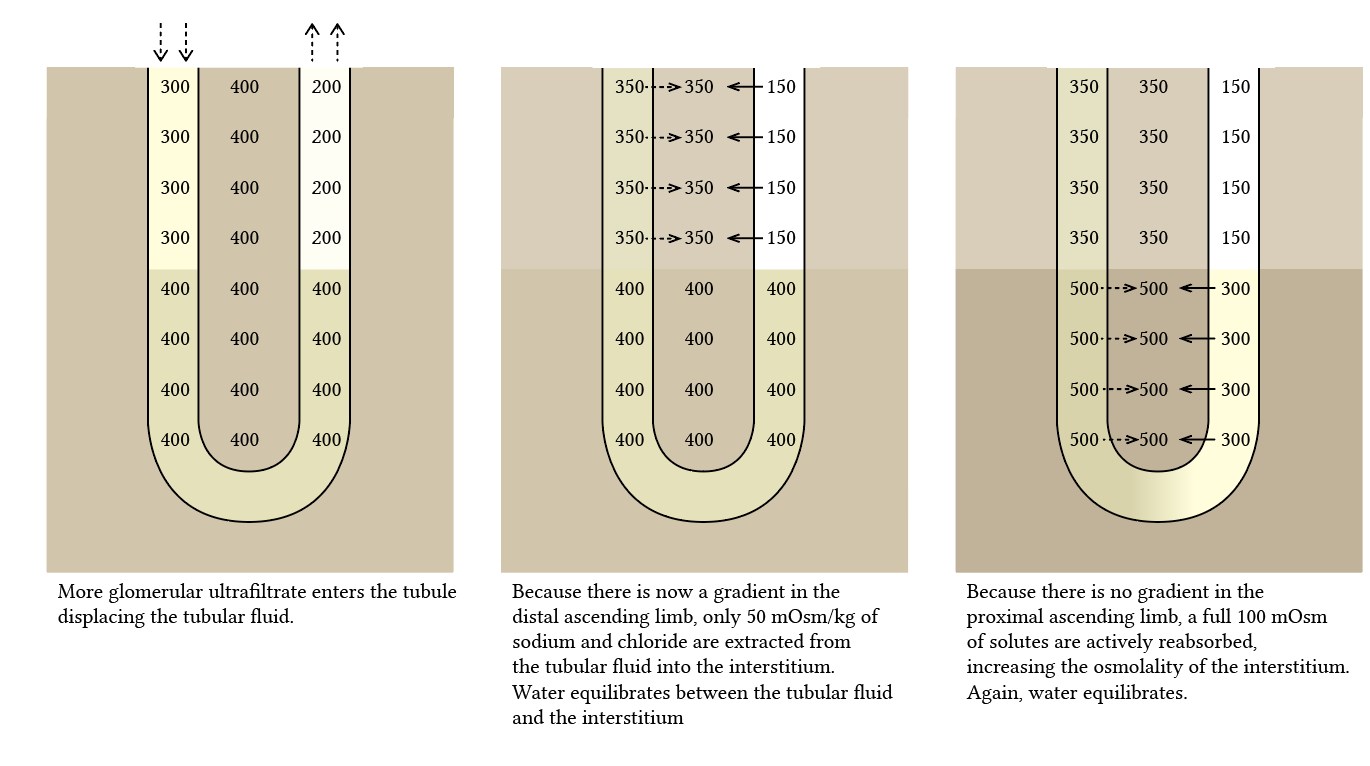 As it comes out of the proximal tubule, the fluid has an osmolality close to that of normal blood, as absorption of water and solutes in the proximal tubule is isoosmolar. As it enters the thin descending limb, it displaces some of the concentrated tubular fluid from the bend of the loop and up into the ascending limb. The ascending tubule transfers some solutes out of the tubule and into the interstitium, making the interstitium more hyperosmolar; except this time, there is something of a concentration gradient in play, which means the ions have to be pumped "uphill".

Again the hyperosmolar interstitium dehydrates the contents of the water-permeable descending limb.  And, as before, the distal ascending limb ends up removing even more electrolytes from the tubular contents, leaving behind some rather dilute tubular fluid. In short, by this point, the cyclicality of this process becomes apparent to most people. In spite of that, usually tube diagrams of the countercurrent mechanism continue for another cycle, as if expecting that those who have not yet grasped the concept will surely grasp it if only somebody were to patiently repeat it to them again without adding any new explanatory material.

Without insulting the reader with any further diagrams, the gist of this is that a small difference in osmotic pressure generated by a single effect (the effect of ion pumps in the thick ascending limb) ends up being multiplied by the countercurrent flow which brings fluid of increasingly higher and higher osmolality to the aforementioned pumps, allowing their One Weird Trick to produce increasingly higher and higher interstitial osmolalities. Moreover, even as the osmolality climbs higher and higher, the gradient between the tubular fluid and the intersititum remains relatively stable, which means the ion pumps never have to pump against a very high gradient, making this whole thing a lot more efficient. On the basis of these italicised underlined elements, this process is generally referred to as the countercurrent multiplier effect.

Magnitude of the countercurrent magnifier effect

How much does this multiplier mechanism multiply the medullary interstitial solute concentration? What are the values in the tubules of the living human kidney? One might be tempted to retort tartly that surely this must depend on the individual kidney, and in any case the understanding of the mechanism is more important than memorising numbers. Unfortunately, this is both true, and a terrible attitude to adopt for the CICM First Part Exam, which is built on the foundation of memorising pointless values. Specifically, in their comments for Question 4 from the first paper of 2020 the examiners insisted ungrammatically that "values for osmolality at the cortex & medulla and within the different parts of the LOH was required".

What's a reputable resource for these sort of data? The college's need for quotable numbers does not diminish the fact that most of the values are measured in experimental animals, and not even from whole animals but often from tortured chunks of kidney. Moreover, they all give different values, and have different starting conditions. To make matters worse, the osmolality of the renal medulla varies  widely in the course of normal renal function. As an example, in some hamster experiments by Schmidt-Nielsen et al (1983), inner medulla osmolality was measured in states of minimal diuresis, maximal diuresis, and everything in between. The range of values spanned from 670 to 3330 mOsm/kg.

In short, the deeper you go in search of the One True Osmolality, the closer you approach the point of no return, beyond which you go insane. One should really just pick a source and stick with it; ideally a resource which represents some sort of mean values with which people are unlikely to disagree. One such resource is Kurbel et al (2002), a review article which describes regional differences in medullary osmolality as "horizons". Apart from this poetic advantage, the authors list three textbooks as their references, suggesting that this diagram was compiled from reputable sources.

The microcirculation of the medulla is a system designed to trap salt and urea in the innermost renal medulla, and to carry away only the reabsorbed water. It achieves this goal by having relatively permeable walls. In this fashion, blood which flows into the medulla ends up becoming highly concentrated because medullary interstitial salt and urea diffuse into it, and blood coming back out of the medulla does not carry any of this salt and urea away because they diffuse back out of the blood just as easily. To borrow words from Wirz (1957),

“all the blood irrigating the medulla enters and leaves the medulla at the corticomedullary boundary, i.e., in an essentially isotonic [to systemic blood] region. In between it may adapt itself to the osmotic pressure of the surroundings by a passive uptake (on its way down) and release (on its way up) of osmotically active solutes.”

That's the solutes. Also one needs to remember that water is deposited in the medulla by diffusion out of the descending tubule. There's no other way for it to leave (there are no lymphatics down there), so the ascending vasa recta must be carrying it away. This is indeed what is observed experimentally. When micropuncture experiments (Zimmerhackl et al,  1985) measured the protein content of blood in the descending and ascending vasa recta, they confirmed that descending blood became more concentrated (lost water and gained solute), and ascending blood became more dilute. Specifically, blood leaving the medulla was more dilute than blood entering the medulla, confirming that a net removal of water was taking place.

One additional part of this is the "cauda equina" effect in the renal microcirculation, where one descending vasa recta vessel begets several ascending ones. The result is that the brisk flow from the descending vasa recta (about 17 mmHg hydrostatic pressure, in case you're wondering) ends up being split among a whole delta of slow meandering waterways. The slowing of the flow which results from this favours a slow exchange of ions and water, ensuring that the medullary concentration gradients don't get "washed away" even though the total volume of blood returning via the vasa recta is greater (because a lot of extra water is being removed).

The role of intrarenal urea recycling

"Urea recycling" is a term used to describe the different effects of vasopressin on water and urea handing in the collecting duct, which produces a situation where highly concentrated urea-rich tubular fluid passes through the inner medulla and contributes even more solute to the hyperosmolar medullary interstitium. Yang et al (2004) and Knepper (1994) is probably the best free explanation of how this happens and how it is regulated.

The permeability of the proximal cortical collecting duct to urea is quite low; according to Sands & Knepper (1987) it is something like 2×10-5 cm/sec. This makes sense, as the purpose of the entire system is to produce concentrated urine, eliminating urea while reclaiming water. As the cortical duct fluid travels through the duct, much of the water from it would be reclaimed, massively increasing the concentration of urea in the duct( Ullrich et al in 1967 measured values of around 300-500 mmol/L, which was much higher than that of the renal interstitium). Then, in the lower third of the collecting duct (in the inner medulla) the duct lining suddenly becomes extremely urea-permeable (something like 40-50×10-5 cm/sec), and the urea is able to cross into the medulla. From there, it can diffuse into the ascending limb, where it ends up being carried back to the collecting duct, continuing the cycle. 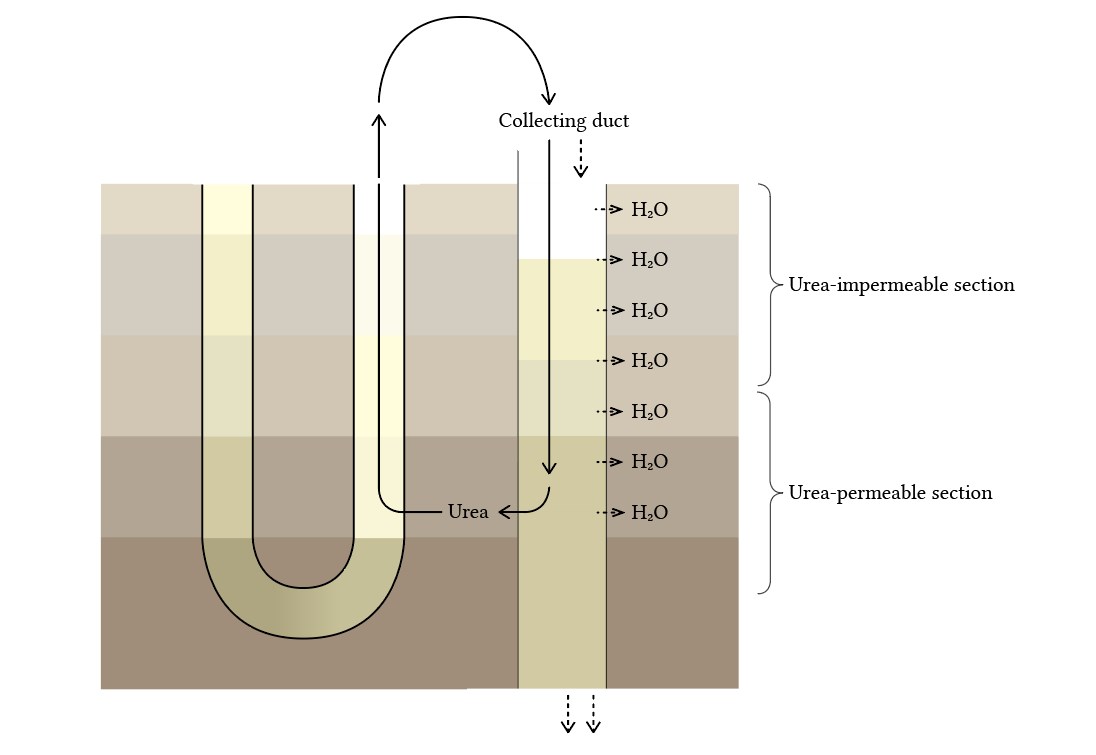 To be clear, there's a few other pathways for urea recycling:

To represent these extra pathways on a similar diagram is possible, but messy: 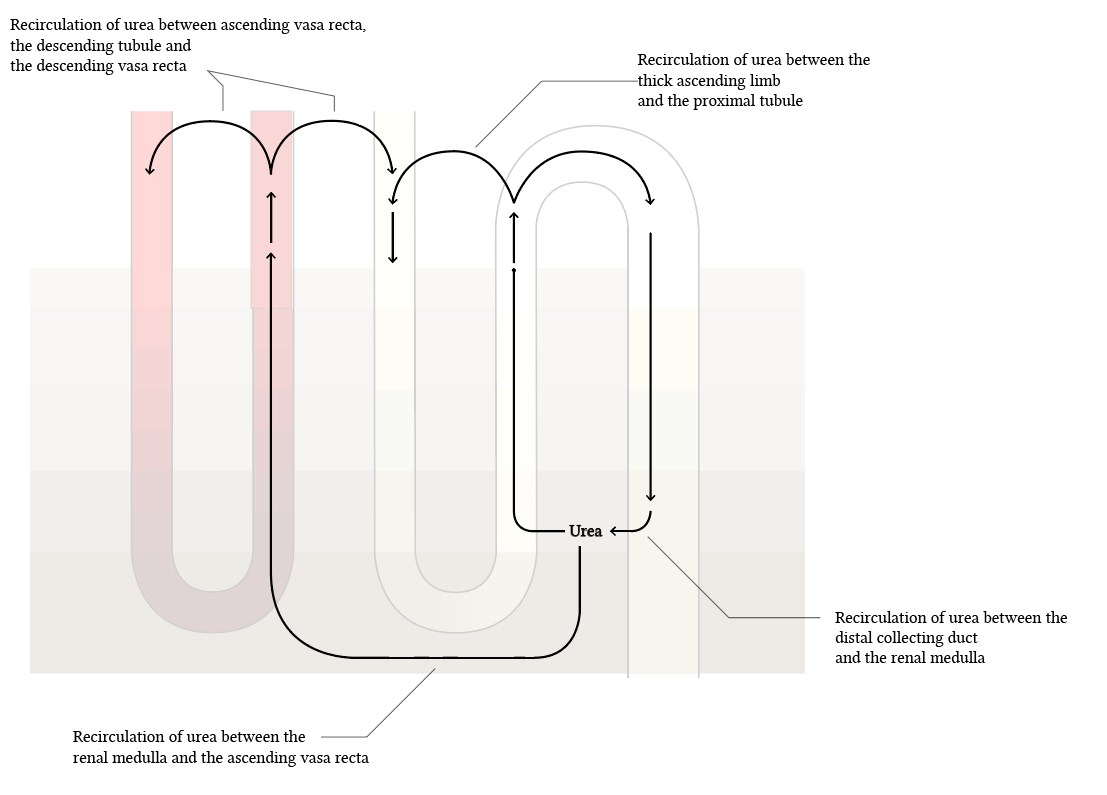 Wirz, W. "The location of antidiuretic action in the mammalian kidney." The neurohypophysis (1957).