This chapter seems relevant to the aims of Section H1(vi) from the 2017 CICM Primary Syllabus, which expects the exam candidate to "describe the role of the kidneys in the maintenance of... electrolyte balance".  In the case of the balance of sodium, the kidneys play a key role, although the representation of this topic in the CICM first part exam might not reflect their importance particularly well. The following two sodium-handling questions have appeared through the historical CICM exam papers:

And in case things are not completely clear from this synopsis, here is a diagram with unreadably small writing which is somehow supposed to increase its explanatory power:

Weinstein (2000) and Reeves et al (2008) are the most detailed references for this specific topic, if you can get a hold of them (they are chapters from Seldin and Giebisch's The Kidney. As the 5th edition currently retails for $400US even with the author's generous institutional discount, this seems rather unlikely. Moreover, that's about 100 pages of extremely dense material, most of which is completely unnecessary for the CICM trainee. They need a highly concentrated pure product, ready for direct  absorption. For this reason, one is instead directed to short review articles such as Matsubara (2004), which cover the same material but without overmuch academic fluff.

According to the college examiners, essential parts of the answer to Question 4 from the first paper of 2018 included "amounts" of sodium filtered and absorbed, as well "percentages reabsorbed in each segment", which presumably means they wanted specific figures. This is strange, because the numerical molarity or mass of the filtered sodium will be so variable that quoting it will be completely meaningless, and in any case one fails to see how regurgitating these numbers demonstrates that you have understood the topic. Nevermind, here they are anyway.

So, the proximal tubule does most of the work, and perhaps that is the only important concept to internalise after looking at this table. The "amount" column is completely pointless. It was calculated from the understanding that there is (let's say) about 200L/day of glomerular filtrate, which amounts to about 28,000 mmol of sodium filtered per day. Assuming a normal person excretes about 40-220 mmol of sodium every day,  that leaves us with 27,780 mmol getting reabsorbed, and the rest is maths.

Sodium handling in the proximal tubule

Following from the above, the traffic of sodium in the proximal tubule is massive and constant. Most of this seems to be a transcellular phenomenon, and multiple transport proteins are involved. Of these, the key players are:

It is almost certain that nobody ever would be expected to remember these, or discuss them in any great depth in any sort of exam. The most important part to remember is probably the role of Na+/K+ ATPase at the basolateral membrane, which provides the sodium gradient for all the other cotransporters. This exchange pump protein is present in such vast numbers that when Gstraunthaler et al (1985) inhibited them all with ouabain they found the oxygen consumption of the tubule cells had halved, i.e. Na+/K+ ATPase activity accounts for 50% of the metabolic fuel consumption of the proximal tubule cells.

At this stage, some sort of graphical representation of these relationships is usually offered in scientific papers and textbooks, because the mettle of a technical/scientific writer in the field of nephrology seems to be measured by the complexity of their ion channel diagram. Not to be outdone, a suitably monstrous version was produced locally to offend the eye of the reader. Behold! 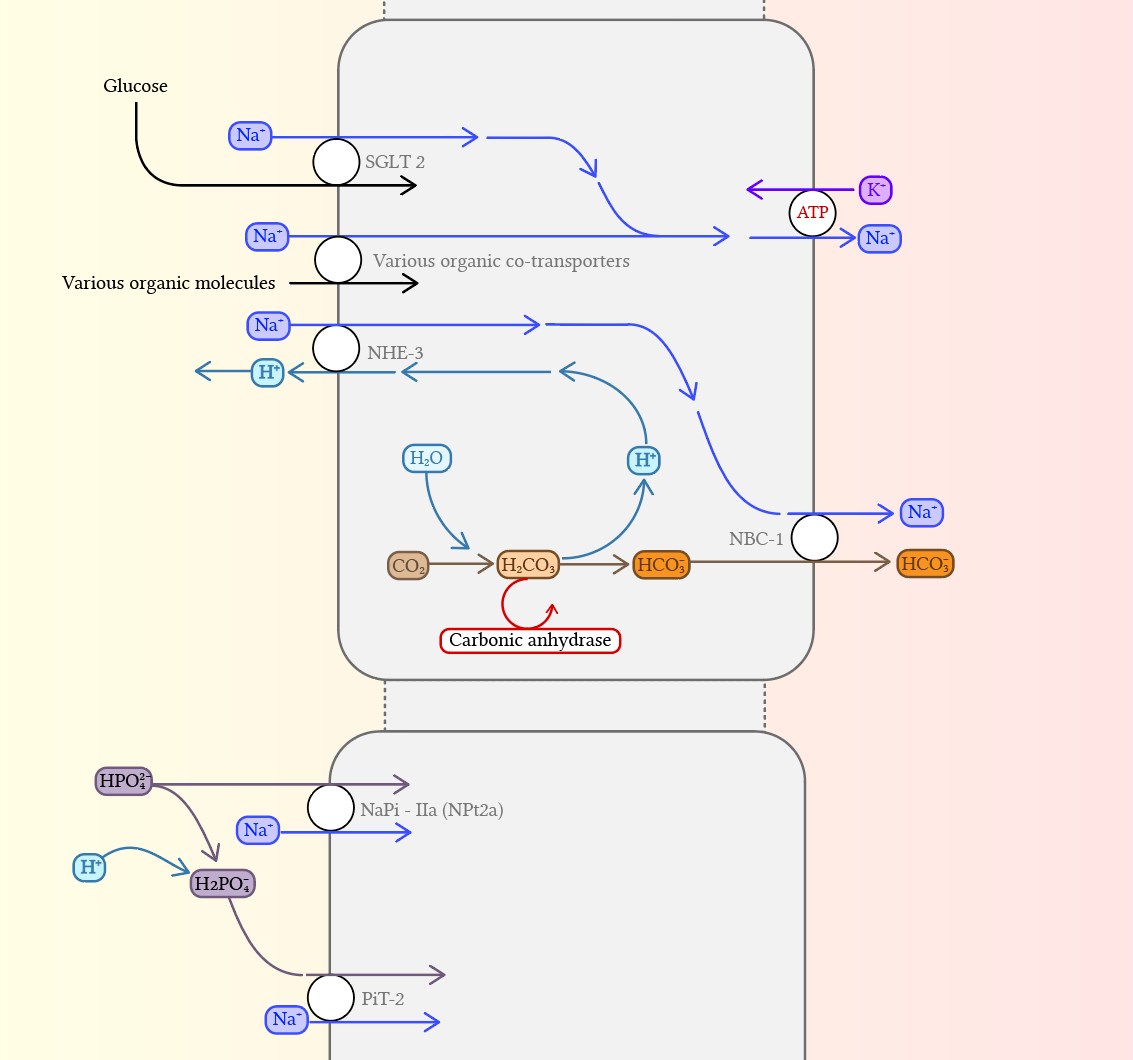 Obviously because the process of sodium reabsorption is so closely tied to the reabsorption of everything else, it needs to keep cracking along no matter what else is happening in the body, and should therefore be relatively free from bureaucratic interference. However, it does appear to be under some sort of regulatory control. The controlling factors are unsurprisingly the same ones that are usually involved in the homeostasis of the circulating volume and blood pressure, such as elements of the RAAS, noradrenaline, thyroid hormone, and various vasoactive mediators. Wang et al (2009) in fact have a huge list of neurohormonal influences which increase and decrease proximal tubular sodium transport, so large that it would have been unforgivable to reproduce it here in full. A severely abbreviated version is offered here in the unlikely case it ever becomes relevant to anybody.

How much does any of this regulation actually affect the handling of sodium, and which mechanism plays the most important role? This is hard to say. It seems that NHE3 plays the most important role in terms of raw sodium throughput. This channel seems to be doing most of the heavy lifting; when Schultheis et al (1998) knocked out the NHE3 genes of mice, their tubules reabsorbed 50% less total sodium and 80% less bicarbonate. Angiotensin II seems to be the most important regulatory factor involved in the control of NHE3 function; a drop in blood pressure stimulates the production of angiotensin II and increases NHE3 expression, thereby increasing salt and water reabsorption by the proximal tubule (Li & Zhuo, 2016)

Sodium handling in the thin limbs of the loop of Henle

The thin descending limb is highly impermeable to ions, its main role being to concentrate the tubular fluid. As the result, the concentration of sodium increases over its transit into the hairpin of the loop, and it is maximal at the end of the thin descending limb (which ends just before the turn). When Jamison (1968) collected microsamples from different sites in a rat model, the samples closest to the renal papilla (i.e. the most distal parts of the longest loops) had the highest concentration of sodium, which in this experiment was about 250-300 mmol/L. To represent this graphically using some rough approximation from studies such as Jamison's: 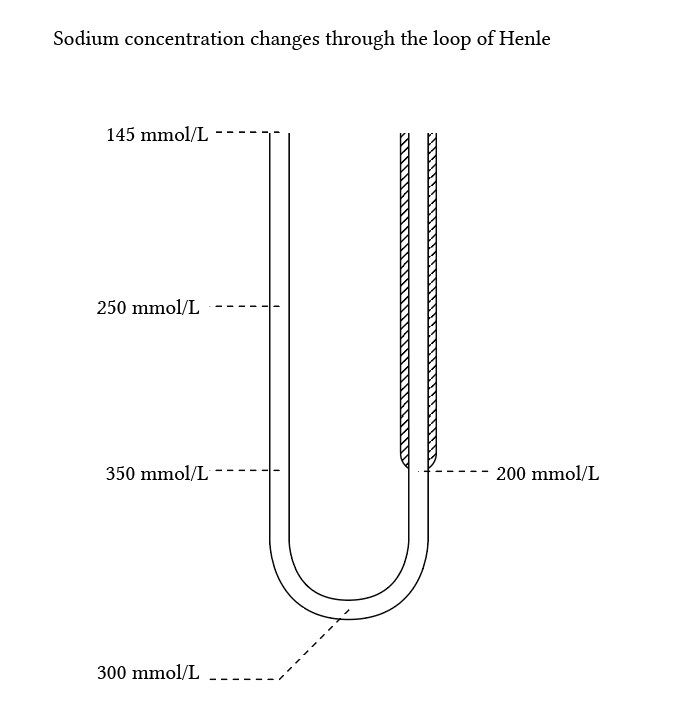 The thick ascending limb is impermeable to water, and its apical membrane bristles with frusemide-sensitive NKCC2 Na+ K+ and Cl- co-transporter proteins. Approximately 20-30% of filtered sodium is reabsorbed here. The gradient for the movement of sodium here is again supplied by the basolateral Na+/K+ ATPase which helps suck sodium along its transcellular path.

A second paracellular mechanism plays a role, where a potential difference is generated across the tubule epithelium, driving the sodium across the tight junctions. This electrical gradient is generated by the constant recycling of potassium. Consider: the concentration of potassium in the tubule is always going to be lower than the sodium, which means it can never stay co-transported - after it makes its way into the cell via the NKCC2 channel, it needs to return to the lumen so it can be transported again. This recycling leads to a net buildup of positive charge in the lumen (as chloride is removed, but the potassium remains). According to a diagram in Reeves et al (2008), the magnitude of this potential difference is about 10 mV (i.. the tubule lumen is about 10 mV positive as compared to the surrounding interstitium.

Because of the vigorous transport of solutes and minimal transport of water, the thick ascending limb is able to dilute the tubular fluid to the point where its osmolality ends up being close to 90-100 mOsm/kg, with perhaps 25-40 mmol/L of sodium.

Apart from frusemide, several other factors influence the transport of sodium here, which should by this stage be familiar and predictable for the reader.

There are a few other factors worth mentioning in a half-hearted "just to let you know" sort of way. For example, chronic exposure to frusemide increases the expression of apical NKCC2 proteins, making you slowly become resistant to frusemide. A high protein diet can also do this. Conversely, dietary sodium restriction decreases their expression.

The distal collecting tubule retrieves 5-10% of the total filtered sodium load. By the tubular fluid gets to this point (i.e. where the macula densa is), it is usually quite sodium-poor already; with probably something like 25 mmol/L of sodium. Then, somewhere along the early DCT some sodium is actually added to the tubular fluid by some mechanism - Schernemann et al (1982) recorded a value of 50mmol/L just before the macula densa. Thereafter, the thiazide-sensitive sodium and chloride co-transporter NCC reabsorbs more sodium, leaving the concentration of sodium at the end of the distal tubule as something like 30 mmol/L, according to some rat micropuncture experiments by Hierholzer et al (1965).

The exact amount of sodium absorbed here is said to be "load-dependent", i.e. the tubule will remove 80% of the sodium which gets delivered to it, and the more sodium you deliver, the greater the rate of its removal will become, in order to maintain this 80% ratio. "Absolute reabsorption rates of Na across the distal tubule increased in proportion to tubular flow rate, and no tubular maximum... was observed", remarked Khuri et al (1975). Though this segment of the nephron is only responsible for 5-10% of the total reabsorption of sodium, it can scale its performance to meet demand, and its sodium absorption rate can increase to a point where it resembles that of the proximal tubule (Costanzo, 1984). For example, where sodium reabsorption in the thick ascending limb is blocked by frusemide, the distal convoluted tubule heroically upscales its reabsorption rate, and with chronic frusemide use its cells undergo significant morphological and functional changes to meet the increased demand. In this way, sodium delivery can be thought of as an important regulatory determinant of distal convoluted tubule function. Apart from sodium delivery, the other major controlling factor seems to be aldosterone, which appears to increase sodium reabsorption by some non-ENaC mechanism (as this channel is absent from the DCT).

Sodium handling in the collecting duct

By the time the tubular fluid gets here, most of the sodium has already been reclaimed back into the circulation, and not a lot is left to do. The collecting duct mops up the rest (perhaps 2%). Most of the sodium reabsorption here is passive, and is mediated by the amiloride-sensitive ENaC channel the activation of which is regulated by aldosterone. Additionally, according to Reeves et al (2008), vasopressin adds to the sodium reabsorption here by stimulating cAMP and increasing the insertion of these channels into the apical membrane.

With enough aldosterone, one can increase the sodium conductance of this segment by about ten times, which - over a long enough timeframe- will produce a gradual increase in total body sodium. The main advantage of making changes to the sodium content of tubular fluid here is that this really is the last stop on the way to the bladder, and so one can do whatever one wishes without the fear that some more distal segment will just reabsorb all the sodium anyway. In short, the collecting duct is the final regulatory step in the control of body sodium.