This chapter is relevant to the aims of Section H1(vi) from the 2017 CICM Primary Syllabus, which expects the exam candidate to "describe the role of the kidneys in the maintenance of... electrolyte balance".  This came up twice in the past papers, as Question 16 from the second paper of 2010 and Question 8 from the first paper of 2021, but it will probably appear again. The fate of potassium in the tubule is attractive topic for an exam question because it is not something everybody will immediately know the answer to, nor is it so esotoric enough to seem unfair. Furthermore, on a purely pragmatic level, we tend to mess with the renal handling of potassium quite a lot in the ICU, which means we should probably know a little bit about it.

Or, in the form of a confusing diagram,

Recommenddations for people who did not want to buy any textbooks would have to start with Palmer & Clegg (2019) whose excellent free article covers all the essentials. Also, much of Wright (1977) is still accurate and relevant, and this too is available as a free full text paper. Ludlow's Renal Handling of Potassium (1993) is also pretty good, but neither recent nor free, and if you're going to pay for stuff then you may as well pay for something like Seldin and Giebsch's The Kidney where Chapter 49 by Malnic et al (p.1659-1714) covers the subject in the sort of exhausting detail that requires a bibliography of 607 references.

Handling of potassium in the proximal convoluted tubule

Like everything else, potassium is filtered freely at the glomerulus, and so the concentration of potassium that enters this segment is the same as what is in the blood, more or less. Well, mainly less, because a sort of Gibbs-Donnan equilibrium is set up between the glomerular ultrafiltrate and the plasma, where the negatively charged plasma proteins that stay in the plasma attract the positively charged potassium out of the deproteinated filtered fluid, but according to Malnic et al, the magnitude of this effect is minimal.

The movement of potassium in the proximal tubule is at the same time the greatest in importance, and the most boring. Of the total filtered potassium coming down out of the glomerulus, about 50-55% ends up being reabsorbed at this part of the tubule. From what we can learn from micropunctured rat kidneys, the majority of it is dragged across the proximal tubular epithelium by solvent drag, along with all the reabsorbed water.

This water-dependent mechanism probably accounts for the majority of potassium transport. There are a few other mechanisms with mainly theoretical and exam importance, which could be listed here without overmuch timewasting:

There is little mention of these mechanisms around textbooks and highly regarded exam preparation resources, because their value to the exam candidate is nil. Moreover, this part of potassium reabsorption is not under any sort of tight regulatory control - it tends to depend on the same factors that influence the renal handling of water and sodium. In that sense, angiotensin II and vasopressin can be said to play an indirect regulatory role in the reabsorption of potassium in the proximal tubule.

Potassium handling in the thin limbs of the loop of Henle

The thin descending limb is said to be impermeable to ions, and the concentration of all the solutes in the tubule lumen ends up increasing, up to some sort of maximum close to the hairpin turn of the loop. De Rouffignac et al (1969) found potassium levels 10-13 times higher than the plasma in the longest loop segments (i.e. a potassium concentration of 50-60mmol/L).

The attentive reader will point out that the concentration of the tubular fluid by this stage is only about 3-4 times what it was in the plasma (i.e. an osmolality of 1200 mOsm/kg is achieved), which means that concentration alone does not explain this increase in potassium concentration. In short, it appears that potassium is added to the tubular fluid along the descending thin limb. This appears to be a completely passive diffusion-driven mechanism, as nobody has ever found any active potassium transporters here. This diffusion is driven by the high potassium concentration gradient which develops in the inner medulla. By reabsorbing potassium from the other, more distal segments of the nephron, the inner medulla ends up developing a high interstitial potassium gradient, and in this way potassium is recycled, trapped by a countercurrent exchange mechanism. 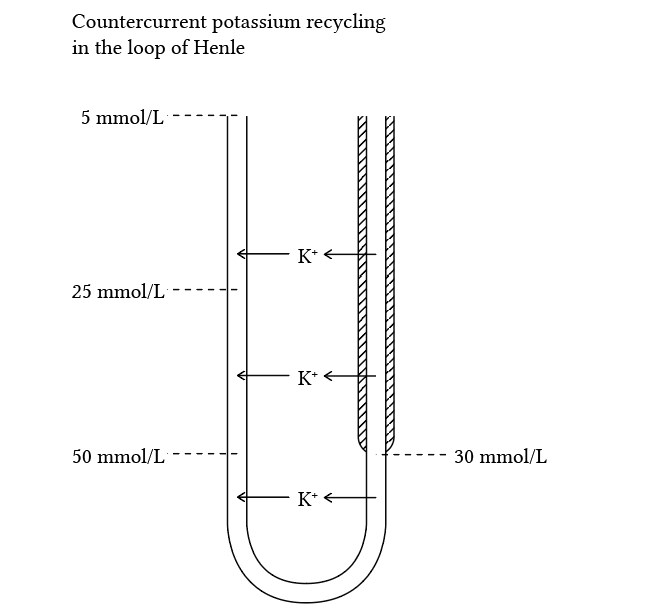 By the time the tubular fluid ascends to the end of the thin ascending limb, it will end up losing much of the potassium it has gained on the way down. De Rouffignac et al found potassium concentrations often no greater than double those of plasma, i.e. as low as 10 mmol/L.

The thick ascending limb reabsorbs about 25-30% of the filtered potassium as it ascends up out of the inner medulla. This is mainly attributable to the activity of the NKCC2 co-transporter, the drug target of frusemide. For every sodium and potassium cation pair, it transports two chloride ions, to be shuttled out the back door by CIC-Kb. 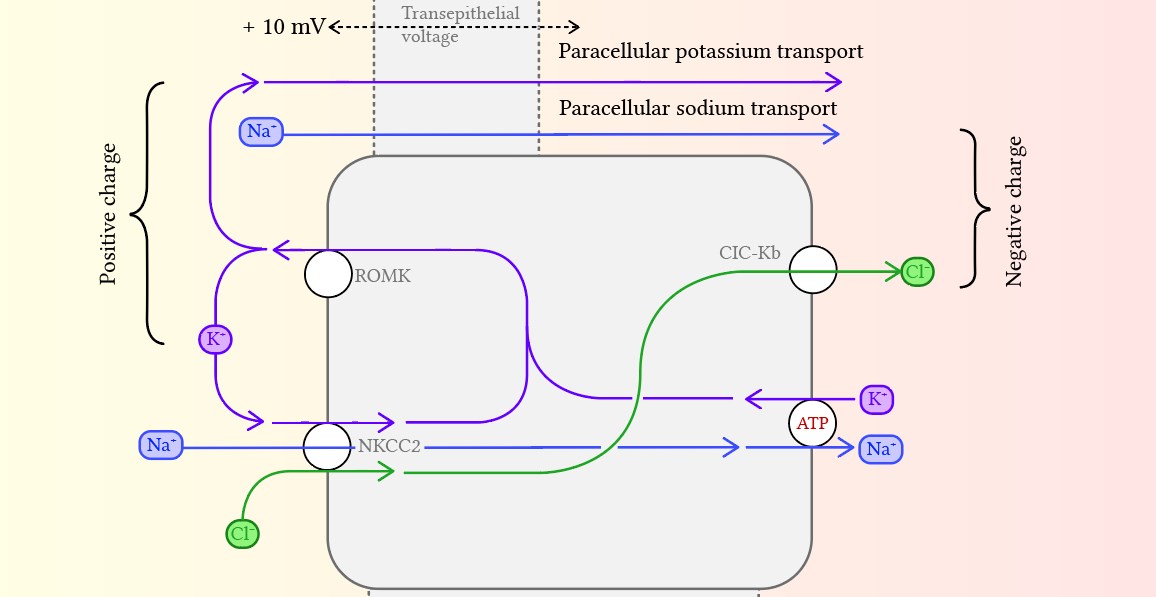 So, this is a 1:1 transport process, where for every one sodium ion, one potassium ion is transported. As there are far fewer potassium ions then sodium ions, one might expect this co-transport to cease if you run out of potassium. Fortunately, the apical ROMK potassium channel allows potassium to exit the cell again; and in fact the high intracellular concentration of potassium favours this movement. Thus, there is at all times plenty of potassium in the lumen of the thick ascending limb for the NKCC2 transporter to do its thing. The thick limbt just keeps recycling potassium in this fashion until as much sodium has been reabsorbed as is necessary.

So, some might ask, how does this inefficient-sounding revolving door mechanism produce any potassium reabsorption? Well. Like almost everything else in the nephron, this is driven by the basolateral egress of sodium, which creates a powerful gradient for the movement of sodium across the cell. As the result of this, vast quantities of sodium (and along with it, potassium) are removed from the lumen. Along the way potassium does get recycled to keep the co-transporter pump going, but the net effect is also the movement of potassium out of the lumen. Additionally the recycling of potassium cations back into the lumen creates a potential difference across the tubular epithelium, with the lumen positive relative to its surroundings, and this also adds a paracellular route for potassium movement. Ultimately, these processes result in a change from a sodium concentration of around 200 mmol/L down to about 25-30 mmol/L, and from 10-15 mmol/L potassium down to 5 mmol/L of potassium.

Consider now what might happen if the NKCC2 transporter was blocked (say, by frusemide). There would not be any sodium and potassium co-transport out of the tubular lumen. The ROMK channel would remain open, however, and potassium would leak out into the tubular fluid along its concentration gradient. The result would the net potassium loss which we frequently see with frusemide use.

The regulatory mechanisms which influence the handling of potassium in the thick ascending limb include:

Potassium in the distal convoluted tubule and collecting duct

The distal convoluted tubule receives fluid that is extremely dilute (90-120 mOsm/kg) and already poor in potassium. Over its transit in this tubule, the concentration of potassium increases. The cause for this secretion of potassium is the subject of some debate. Some authors (for example Ellison et al, 1987, and Malnic et al, 2004) blame it on a currently unidentified potassium/chloride co-transporter. Others (Subrmanya et al, 2014) hold that this is entirely due to electrochemical gradients driving it out through the ROMK channel. The latter makes a lot of sense.

Consider: in the late distal collecting tubule and the collecting duct, where ENaC channels are present, some absorption of sodium will occur. As this happens, a negative voltage will be generated on the luminal side of the membrane due to the loss of cations. This will attract potassium through the ROMK channel. The more sodium delivered to this part of the distal nephron, the more sodium will need to be reabsorbed, and the more potassium will leak out. This sort of voltage-dependent potassium loss is indeed what is seen with loop diuretics.

Potassium secretion is not the only possibility here. For one, the ROMK channel also works in reverse, and would permit potassium back into the cell if the conditions were favourable. Additionally, there is an apical H+/K+ ATPase which can actively reabsorb potassium in exchange for hydrogen ions. This is mainly expressed in the intercalated cells of the collecting duct, and plays an important role in the  regulation of acid-base balance by the kidney.

There is one further point of interest in this segment of the nephron. The ROMK channel is stabilised in an inactive state by magnesium, which binds to a site in the pore, preventing potassium from leaking out (Nichols et al, 1994). This is one of the reasons that magnesium deficiency aggravates hypokalemia and makes it refractory to replacement (well, in fact there are several mechanisms, explored in great detail by Huang et al, 2007).

So, what do we get at the end? A variable urinary concentration of potassium, that's what. Most of the time 20 mmol/L is the expected random value for urinary potassium. However, even under normal circumstances it can vary substantially. An excellent study by Siani et al (1989) studied the urinary potassium levels of "free-living men", where presumably enslaved domestic men were not expected to yield interesting results. The interindividual ratio of variance was 2.5 in either direction. i.e one could have 20mmol/L of potassium in their urine, or 8mmol/L, or 50 mmol/L (normal range is thought to be 15-40 mmol/L). The authors concluded that no less than 5 measurements should be collected to form a picture of any given person's One True Urinary Potassium.

The reason for this variability is the dependence of potassium reabsorption and secretion of numerous influences. Some of these regulatory variables are listed as follows:

De Rouffignac, C., and F. Morel. "Micropuncture study of water, electrolytes, and urea movements along the loops of Henle in Psammomys." The Journal of clinical investigation 48.3 (1969): 474-486.