This chapter is relevant to the aims of Section H2(i) from the 2017 CICM Primary Syllabus, which expects the exam candidate to have "an understanding of the pharmacology of diuretics". Acetazolamide is not as commonplace in ICU as furosemide is, and some might call it a niche agent used for only a very specific purpose. It does, however, act in a very unique manner, and is therefore interesting from a "use this weird drug mechanism to explain physiology" sort of perspective.  Perhaps for this reason it has ended up becoming the focus of several past paper SAQs, where it was used as a foil for furosemide:

The reasonable person will at this stage hasten to point out that this (this grey box here) is probably the absolute maximum one would be expected to ever know about this drug, and moreover that nobody anywhere would ever be asked to comment on its pharmacokinetics in an exam, as they are fairly bland. Acetazolamide does not do anything interesting to enzymes and its clearance is boring and uninstructive. The real meat and potatoes is where it inhibits carbonic anhydrase. If a single article was needed for quick revision, the best would have to be Kassmali & Sica (2011),  "Acetazolamide: a forgotten diuretic agent".

Acetazolamide, or N-(5-Sulfamoyl-1,3,4-thiadiazol-2-yl)acetamide, is usually classified as a sulfonamide, even though "sulfonamide" is just a functional group (-SO2NH2) which makes something the amide of a sulfonic acid, and which is present in a huge number of unrelated substances. Furosemide is also a sulfonamide, by that definition. No other classification structures are available, and "sulfonamide" is probably good enough anyway, as it does highlight the possibility that susceptible people will develop anaphylaxis to it. Another structurally analogous carbonic anhydrase inhibitor, dorzolamide, is also available, but it is mainly used in the management of glaucoma and probably does not belong in a chapter about diuretics .

It would be ridiculous to describe other sulfonamides as relatives of acetazolamide, as the range of variation is massive. Perhaps it would be better to confine ourselves to listing just the antibiotic agents. Sulfonamide antibiotics (sulfanilamide, sulfasalazine, sulfamylon, sulfametrol, sulfamonomethoxine) are all inhibitors of carbonic anhydrase (al-Rashida et al, 2014). Similarly, acetazolamide is an antibiotic, though its effect is not a typical sulfonamide effect - unlike its relatives, it does not inhibit P-aminobutyric acid (interfering in folate metabolism), but instead inhibits bacterial carbonic anhydrase (Hewitt et al, 2021). In case you are seriously thinking about this, it seems to have mainly Gram-positive cover, and it is damn potent - for Abutaleb et al (2021), it outperformed linezolid in a mouse model of VRE sepsis.

Other non-sulfonamide carbonic anhydrase inhibitors do exist, which could be described as drugs acetazolamide is friends with, but not related to. There's a surprisingly vast range of these, including phenols, polyamines, carboxylic acids, coumarins and fullerenes. Specific examples include resocinol, spermine and ursodeoxycholic acid. In case you want to go in that direction there is an article that lists and discusses these substances in great detail (Lobelino et al, 2016). As there is no possible way this could ever be on any exam anywhere, one is strongly encouraged not to.

On a completely different topic, acetazolamide is related to, and itself a member of, antiepileptic drugs. According to Reiss & Oles (1996) it has been approved for use in epilepsy since 1953, and the mechanism of effect is related to CNS acidosis: specifically, "carbon dioxide accumulation in the myelin, cytoplasm, and glial cell membranes"  Zonisamide, a chemically related seventeenth-line antiepileptic agent which you may have never heard of, is a methanesulfonamide with low potency carbonic anhydrase inhibitor effects (Leppik, 2004). According to experts, "zonisamide blocks repetitive firing of voltage-sensitive sodium channels and reduces voltage-sensitive T-type calcium currents without affecting L-type calcium currents".

Structure and function relationship of acetazolamide

The first sulfonamide antibiotic drugs all seem to have had some acetazolamide-like carbonic anhydrase inhibiting properties. For example, looking at sulfanilamide (one of the first sulfonamide antibiotics), Strauss & Southworth (1938) observed a metabolic acidosis and urinary alkalinisation. It also had some diuretic effect, and Schwartz (1949) reported using it to remove fluid from a series of fairly sick decompensated patients in Boston. The results were rather dramatic, or rather the mechanisms by which these results were measured was dramatic: "At the end of therapy the venous pressure had fallen to 170 mm of saline solution. The liver receded 6 cm.,  edema disappeared, and the amount of fluid in the chest diminished."

However, sulfanilamide was not a great diuretic. For one, it had extremely low potency. Schwartz was giving his patients doses of 4-6 grams per day to achieve this effect, to the point where one of the patients had to discontinue the treatment because of emergent methaemoglobinaemia. Fortunately, when acetazolamide came along in 1953, it had about 100 times more diuretic potency. The same sulfonamide group was attached to a five-member thiadiazole ring and an acetamide group (hence the "aceta" and "azole" name elements adjoined to the "amide"). 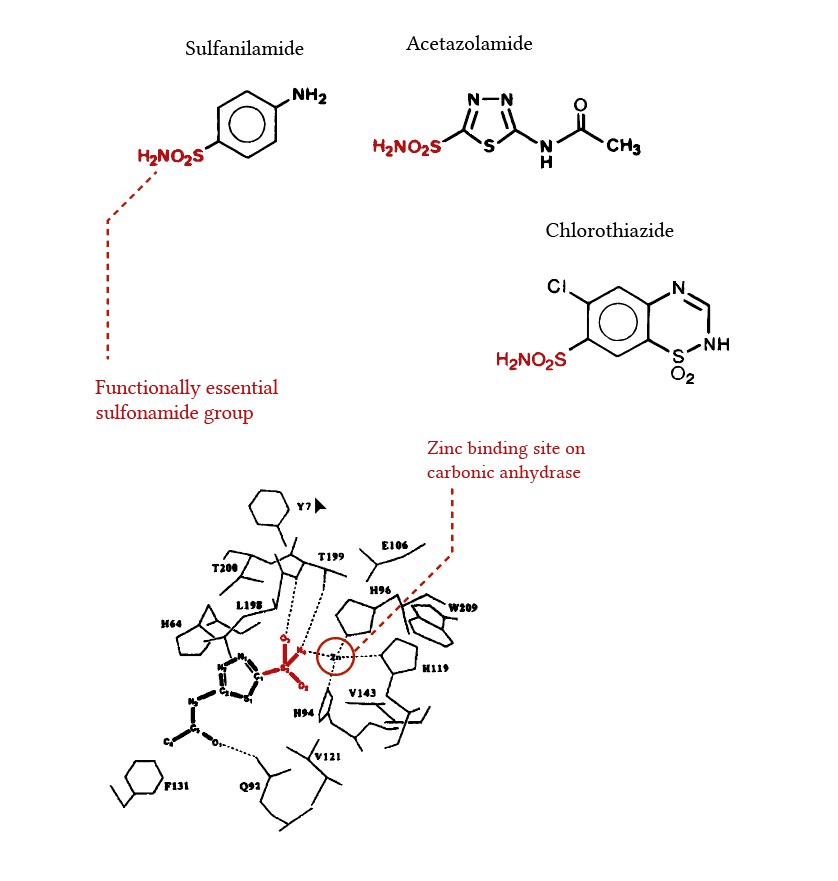 Obviously not every substance which has a sulfonamide group will have carbonic anhydrase inhibitor properties, but many do. For example, chlorothiazide and basically all the other thiazide diuretics have some carbonic anhydrase properties. However, acetazolamide has a far higher affinity and its CA-inhibitor effects are dominant, whereas for other drugs they are lost as a minor side-effect amid their primary mechanisms of action.

As already mentioned, the pharmacokinetics of acetazolamide are not especially interesting, as it does not do any elegent molecular tricks or flips. It is a good honest white to yellowish-white fine crystalline powder with no odor or taste. It is a weak acid with a pKa of 7.2 and it is slightly water-soluble.

Acetazolamide is distributed into mainly extracellular body water, with the majority of it confined to the circulating volume where it prefers to go around bound to albumin. Approximately 90% of it is protein-bound. The volume of distribution is usually given as 0.2-0.3L/kg. In spite of this small-seeming VOD, this drug seems to get everywhere, including the central nervous system.

Acetazolamide undergoes basically zero metabolism, and most of the administered dose is recovered from the urine (except for whatever fails to be absorbed). In the kidneys, it appears to undergo active secretion (Taft et al, 1996), probably by one of the OAT organic anion transporters (much as frusemide). The half life is variable, depending on which source you read; Kassmali & Sica (2011) give 4-8 hours, other more, yet others less; the bottom line is that one typically needs to give this drug three times a day to renally normal people.

Mechanism of metabolic acidosis due to acetazolamide use

First, remember what the carbonic anhydrase actually does at the proximal tubule.

Now consider what might happen if there were no carbonic anhydrase activity. Bicarbonate reabsorption would be significantly impaired (though not completely abolished, as the conversion of bicarbonate into CO2 would still take place here, albeit at a slower pace).

In short, this is the same effect as what you get in Type 2 (proximal) renal tubular acidosis. The classical interpretation of this situation would pose that the failure to reclaim filtered bicarbonate  would lead to a metabolic acidosis, which would have to be a normal anion gap metabolic acidosis (because where would the extra unmeasured anions come from for a HAGMA?). The physicochemical interpretation would instead focus on what the chloride does, as it is a strong anion and therefore the most important member of the equation. Because there could not be chloride excretion without bicarbonate reabsorption, more chloride would be retained than would normally occur, and in the church of Stewart this would lead to a decreased strong ion difference and therefore metabolic acidosis. It is not clear which explanation the CICM examiners would prefer. Certainly there appears to be sufficient support for the Stewart approach in the literature (eg. Moviat et al, 2006), but the official college textbook for this topic is Vanders, which is as "classical" as you can get.

Mechanism of the diuretic effect of acetazolamide

So, it certainly makes sense that the retention of chloride or the loss of bicarbonate would produce acidosis. But how does any of this produce a diuretic effect? Sure, bicarbonate and chloride are  both osmotically active solutes, but in this instance it appears that one is basically exchanged for the other. In other words, from looking at the mechanism of acetazolamide, it is difficult to see how it could be expected to increase water secretion.

However, it does certainly produce a vigorous diuresis. The mechanism for this is difficult to track down. Vander's barely mentions acetazolamide at all, and whenever one reads any authoritative text on the subject, the writer tends to trail off instead of explaining the basics here. For example, the otherwise excellent summary from StatPearls is derailed by these troubling paragraphs:

"Carbonic anhydrase is found in red blood cells and also the proximal tubule of the kidney. It works to reabsorb sodium, bicarbonate, and chloride."

"The entire process of excretion that is inhibited by carbonic anhydrase is essentially working to acidify the urine and reabsorb bicarbonate. Acetazolamide will derange the whole process by increasing sodium in the urine as well as increasing bicarbonate which alkalinizes the urine. Diuresis is the other result."

Apart from the fact that it is hard to comprehend which exact process of excretion is inhibited by carbonic anhydrase,  the references offered in support of the phrase "acetazolamide will derange the whole process by increasing sodium in the urine" actually deal with the effects of acetazolamide in mountain sickness and don't mention sodium elimination at all.

So, what are we to do? Fortunately, one can always fall back on old-school physiology papers. Back in 1960 Relman at al measured the electrolytes in the urine of patients before and after treatment with about 700mg of acetazolamide. Yes, there was indeed an increase in the sodium delivery to the distal nephron, by about 30%; and the urinary potassium almost doubled. At the same time, urinary bicarbonate increased massively, by about 10 times (though the change in concentration is more difficult to guess because the authors chose to report their data in terms of mEq excreted per minute).

Overall, at the peak of the diuretic effect, Relman et al reported that something like 40% of the filtered water, 38% of the filtered sodium and 83 of the filtered bicarbonate were excreted. This was the 1960s, and so of course at that early stage they could not really craft any theory as to how this was happening. Unfortunately, the subsequent decades have done nothing to improve this situation. Either the diuretic effect of acetazolamide is so clearly self-explanatory that we should all grok it intuitively, or nobody has bothered to investigate and explain it even though the drug is enjoying significant popularity. Therefore, what follows is complete speculation.

Consider: the activity of carbonic anhydrase sends CO2 and water diffusing back into the cell, where they are recombined again into HCO3- and H+. That H+ is then recycled perpetually by the NHE3 sodium-hydrogen exchanger, pumped back into the tubular lumen in exchange for a sodium ion. Thus: in the absence of carbonic anhydrase, this perpetual pool of H+ would dry up, and the NHE3 exchanger would have nothing to exchange for sodium. Sodium would therefore remain in the tubular lumen. Sure, there's plenty of other ways for it to get reabsorbed in the proximal tubule (basically everything here is cotransported along with sodium or exchanged for sodium), but NHE3 is the most prolifically expressed sodium traffic protein at the brush border, and so surely this failure to supply protons would result in some substantial sodium loss.

Apart from metabolic acidosis, which is often the desired effect, the possible unpleasant consequence of acetazolamide therapy include:

Schwartz, William B. "The effect of sulfanilamide on salt and water excretion in congestive heart failure." New England Journal of Medicine 240.5 (1949): 173-177.

Leaf, David E., and David S. Goldfarb. "Mechanisms of action of acetazolamide in the prophylaxis and treatment of acute mountain sickness." Journal of Applied Physiology 102.4 (2007): 1313-1322.