This chapter is relevant to the aims of Section H4(ii) from the 2017 CICM Primary Syllabus, which expects the exam candidate to "describe the utility of measurement of serum Creatinine and estimation of Creatinine Clearance". This has appeared several times in the past papers, each time take the candidates by surprise.

Therse were either comparisons of creatinine levels and creatinine clearance, or they focused on creatinine as a biomarker of renal function and specifically on the problems of using it for that purpose, which one question called "limitations" and the other called "pitfalls". It has also appeared in the Fellowship exam, where Question 2 from the first paper of 2010 asked about biomarkers in the assessment of acute kidney injury. That time, the college focused on the clinical aspects and practical utility, but a discussion of serum creatinine and creatinine clearance were still 40% of the answer. In short, it's clearly worth knowing about, and having a prepared statement about the aforementioned pitfalls is probably valuable, considering especially that the pass rate for the three mentioned Primary exam question was 11%, 14.7% and 0%, respectively.

For something as important and ubiquitous as this, there is an unsurprising abundance of high-quality expert articles in the peer-reviewed literature. If just one or two papers are needed,  Perrone et al (1992) and Delanaye et al (2017) are probably the best freely available resources for discussing the uses and misuses of serum creatinine, and there is also this excellent FAQ about GFR estimates published by the National Kidney Foundation.

Knowing that creatinine is a small molecule that is produced at a constant rate and is cleared exclusively by the kidney would naturally make you want to use it for measurements of renal function. A raised creatinine, therefore, would signal that something is wrong with renal clearance mechanisms (that is why it is accumulating), whereas a normal creatinine would be a reassuring sign of normal renal function. Right?

Interestingly, these statements are broadly true, and it is possible to use creatinine like that. For example, many classification systems for acute kidney injury use multiples of baseline creatinine to define renal dysfunction (eg by the KDIGO criteria, Stage 3 renal failure is where your creatinine increases to 2.0-3.0 times the baseline). However, when we look at creatinine as an isolated biomarker of renal function, we should be aware of its limitations. The following list of "pitfalls" has been harvested from Shemesh et al (1985) and Delanaye et al (2017):

So, these limitations of creatinine sound like they are well known and - within reason - predictable. Surely, you might think to yourself, there must be some way of correcting the measured value to adjust for those limitations? Perhaps a formula of some sort?

For situations where precision is required, there's an entire chapter dealing with the techniques of actually measuring glomerular filtration. This section deals specifically with the different methods by which we can make an educated guess about glomerular filtration, arriving at a not-entirely-accurate answer which is usually still good enough for government work. This guesswork usually takes the following shape:

Observe: the most popular equations for estimating creatinine clearance are all variations on this theme, and they mainly vary by what weight they use and what sort of "fudge factors" and empirically derived coefficients they use to make their mathematical model fit the experimental evidence. 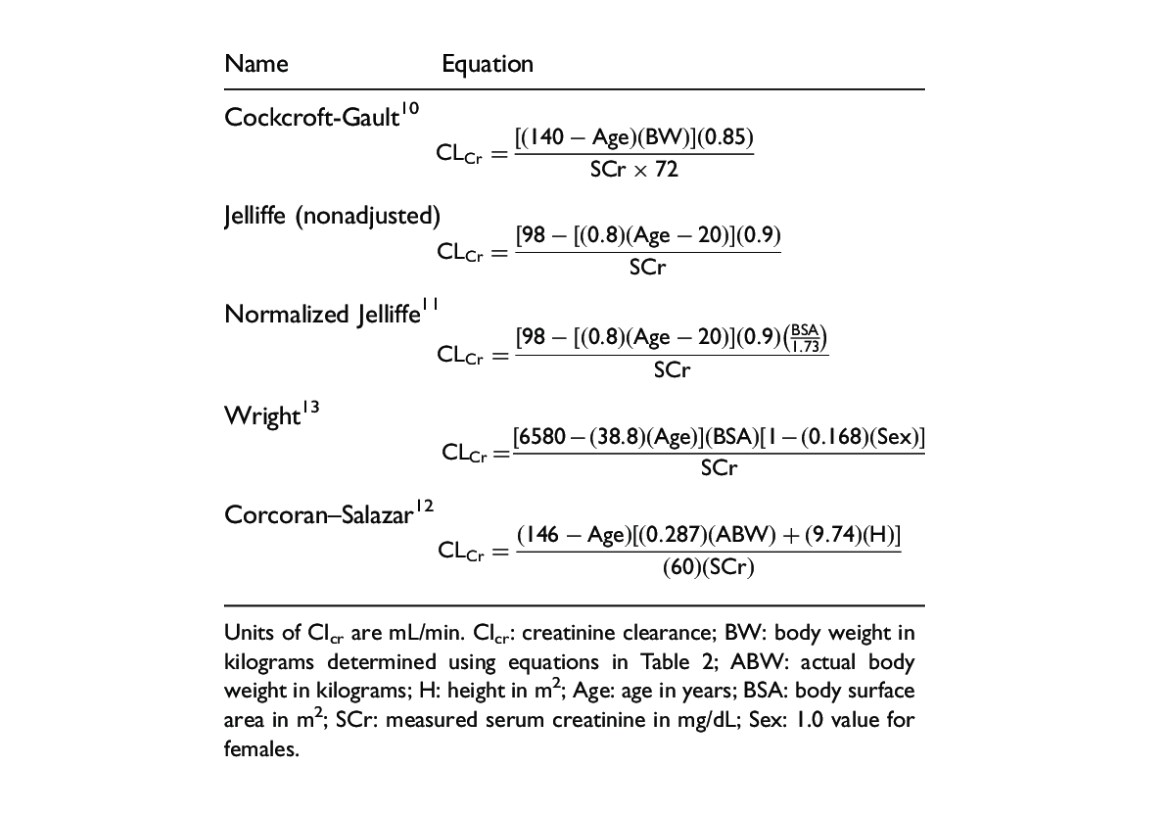 One may be forgiven for not being able to immediately recognise the Jelliffe or Corcoran-Salazar formulae, or indeed to even to recognise having heard the names before. In contrast, Donald Cockcroft and Henry Gault have been household names ever since 1976, when they published their idea in The Nephron. The rest of this discussion will therefore focus on the Cockcroft-Gault formula, as it is a suitably famous representative of all other such formulae.

Cockcroft-Gault formula for the estimation of creatinine clearance

Working on the premise that age and body size should create predictable changes in muscle mass and therefore serum creatinine, Cockcroft and Gault discerned the pattern of change from measurements collected among 534 patients (96% of them Caucasian males, this being Queen Mary Veterans' Hospital in Quebec). For about half of these men, the creatinine clearance was measured via 24 hour urine collection. These measured creatinine clearance results were then used to create regression lines on the basis of which correction factors were developed.

Remember that the equation which describes creatinine clearance is

Thus, as you already have the Scr measurement in the denominator, all you need is some way of numerically representing the normal increase in 24-hourly urinary creatinine clearance which occurs with age and weight. Cockcroft and Gault did this by reducing the creatinine clearance to a value expressed as milligrams of creatinine excreted over 24 hrs per kg of body mass, and then by plotting a graph of these excretion values over every decade of life: 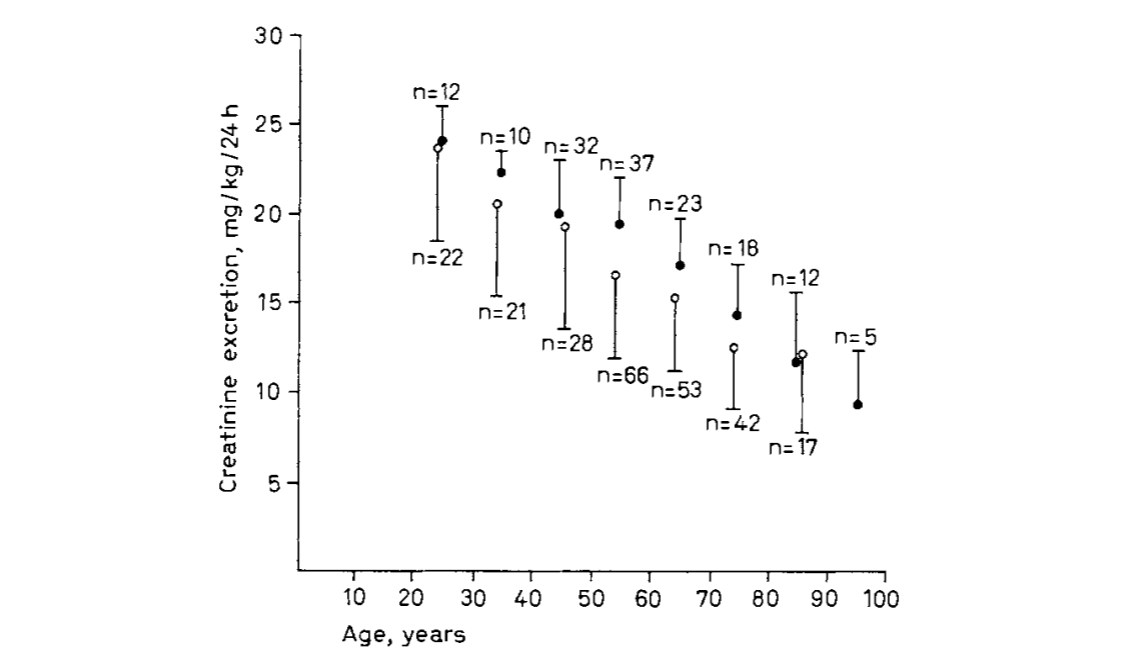 From this graph, the authors were able to draw a line of best fit, which had a certain slope. The creatinine clearance over the years of lifespan declined at a predictable rate, which was about 2.0 mg/kg/24h for every decade of life, or by 0.2 mg/kg/24hr per year. To put it into different words, the clearance rater per kg of weight could be expressed as

Of course, nobody ever measures or expresses creatinine clearance in terms of mg/kg/24hr, so you would have to make it look more normal - perhaps by multiplying both sides of the equation by the patient's weight:

Congratulations, you now have the numerator for the clearance equation. Thus, creatinine clearance is this line-of-best-fit function divided by the measured serum creatinine:

To minimise the mathematical manipulations required to get the result, the authors adjusted their formula, multiplying everything by 5 (so that instead of having to have "(age × 0.2)" you could just use the patient's actual age. With this, the equation arrived at its modern form:

Sounds great, but: does this really work? Some might say that this old formula has serious problems. To fix some of these, serial modifications have taken place over the years, answering concerns regarding its failure to adjust for sex, ethnicity or diet. In spite of these manipulations, the modified Cockcroft-Gault formula and all the other such formulae still have some incompletely resolved limitations.

If these predictive equations are so good, why would you ever need to actually measure the GFR? Surely we could just accurately and easily predict this parameter from serum creatinine measurements and demographic data, rather than injecting inulin into each other like a bunch of superstitious peasants.

Mayersohn, Michael, KENNETH A. Conrad, and R. A. M. A. N. U. J. Achari. "The influence of a cooked meat meal on creatinine plasma concentration and creatinine clearance." British journal of clinical pharmacology 15.2 (1983): 227-230.