This chapter is related to the aims of Section H3(i) from the 2017 CICM Primary Syllabus, which expects the exam candidate to "describe the principles of dialysis and renal replacement fluid". One of the important principles of dialysis is access, which often determines the success or failure of one's blood purification strategy. Of the access mechanisms, there are multiple possibilities: fistula, vas cath, tunnelled line, ECMO circuit, and so forth. For the intensivist, access is typically established in an emergency, and the vas cath inserted by Seldinger technique is the most common access device used. This chapter will discuss the characteristics of these devices.

The characteristics of an ideal vascular access device for dialysis are:

The basic features are shared by all of them. Ultimately, there will be at least two lumens, of which the proximal is the intake and the distal is the outflow. Depicted is a 13Fr 200mm Dolphin model, but this was a matter of convenience and circumstances (the author's registrar just happened to be inserting one on the day of this chapter being written). This is not to act as an endorsement of any specific product or design. Ultimately, these devices are merely a pair of plastic tubes, fused together and up-priced for the medical equipment market. No specific inert plastic tube is better than any other inert plastic tube and all claims to the contrary are marketing.

Up close, these things have several features of note. 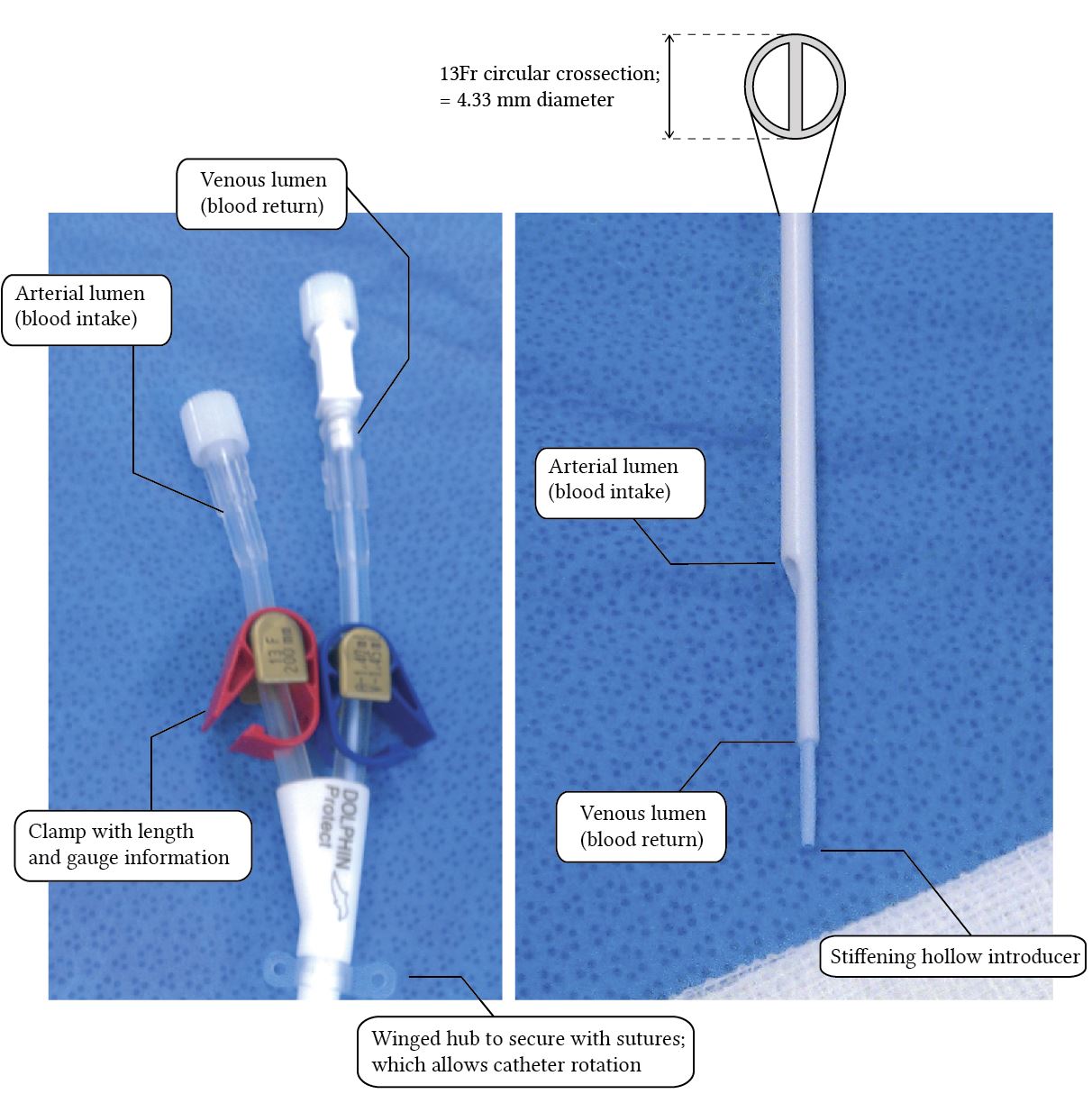 The tip is designed in a way which minimises recirculation, which is basically the returning dialysis-purified blood being sucked back into the filter. Obviously such a thing would decrease the efficiency of the dialysis. Ergo, the design of a vas cath tends to keep the lumen openings separated by at least a few centimetres. The intake also cannot be too far from the outlet, as it needs to be in an area with highest possible blood flow.

The shape of the lumens seems to matter: the flat vas caths with circular lumens appear to have better flow rates. This may have something to do with the influence of fluid-wall contact on turbulence. The vas caths which are round in cross-section but which have flattened semi-circular lumens tend to have more turbulence and poorer flow rates, but they are much easier to insert.

The diameter varies from 10 French to 14 French. Poiseuille's law informs us that by increasing the diameter of the vas cath by 19%, we double the rate of flow though it. Similarly, by doubling the length of the catheter, we halve the flow though it. Thus, to ensure good flow one ought to choose a short fat catheter. They also don't tend to kink as often. One can usually expect flow rates from 200ml/min to about 400ml/min, which is close to the theoretical maximum flow rate of the Prismaflex model dialyser (the blood pump is claimed to have a maximal blood flow rate of 450ml/min).

Placement of the dialysis catheter

The best vessel to cannulate is the right internal jugular vein: it is the most direct path down into the superior vena cava.  Generally speaking, the closer to the right atrium the catheter is, the less recirculation there will be. Recirculation is the aspiration of already "cleaned" blood back into the dialysis circuit. The smaller the vein and the slower the flow though it, the more likely this is to happen.

Obviously if you reverse the connection to the circuit (i,e, return the blood via the proximal lumen) recirculation rates will be ridiculously high and the dialysis will not be efficient. Additionally, one would not want to put this catheter right next to the tip of a central line. All the drugs will be sucked up into the dialysis filter.  The red (arterial) hub should be turned medially, so that the arterial lumen does not suction up against the vessel wall.