Partial pressure and the solubility of gases in biological systems

Even though this chapter is most relevant to Section W(i) from the 2017 CICM Primary Syllabus ("Describe the laws governing the behavior of gases"), it belongs in the start of the respiratory section, as logically any further discussions of partial pressure and tension of dissolved gases should follow from some basic understanding of what those terms actually mean. The modest objective of this summary chapter is to furnish the reader with such an understanding. It is difficult to claim any exam relevance or orientation with CICM learning objectives, as this topic has never appeared in the CICM Part One exams; however a future appearance is impossible to rule out, and it would be reasonable to prepare for it in some minimal way, to say nothing of the fundamental importance of being familiar with the principles governing behaviour of gases in solution.

Behold, a gas mixture. See it sitting calmly in a chamber with a fixed known volume. Let us say it is a mixture of two gases in equal parts. Let us say that the total pressure exerted by the gas mixture on the walls of the chamber is known (a manometer is suspended in the chamber). 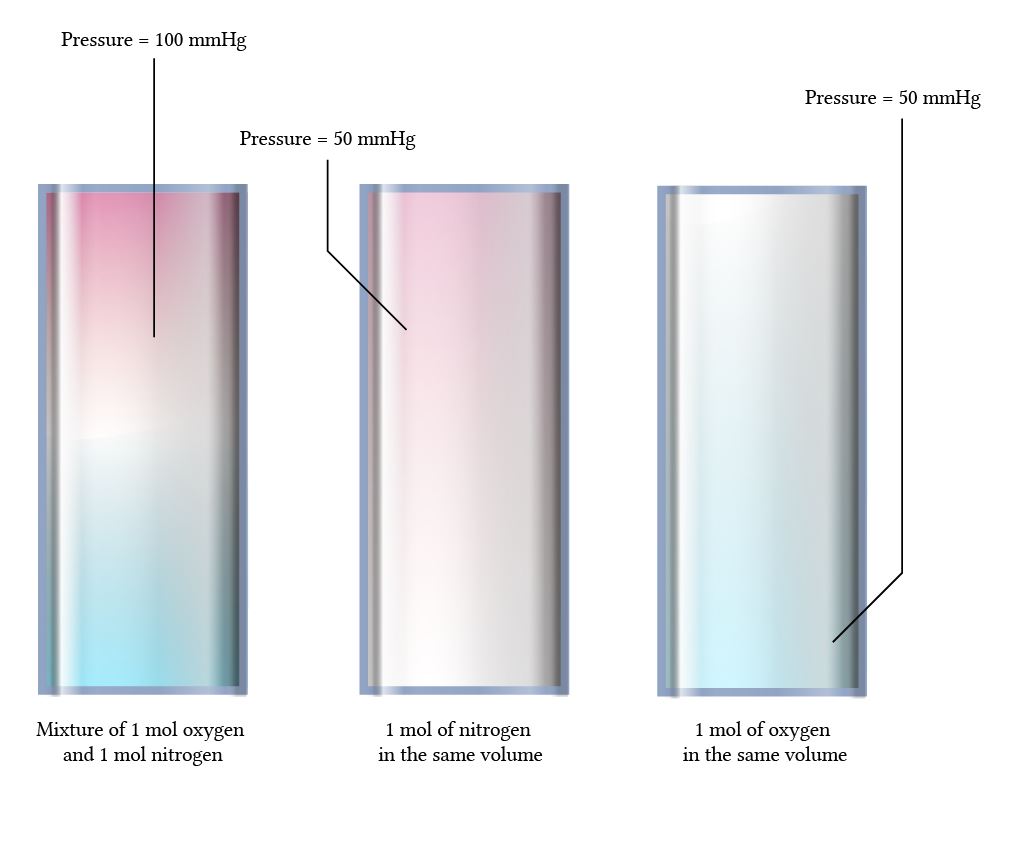 In a mixture of gases, partial pressure is the pressure that a gas would have exerted if it had occupied that volume alone.

Dalton's law has its most immediate medical implications in the calculation of the alveolar gas, where partial pressures of atmospheric gases, water vapour and alveolar CO2 are used to calculate the partial pressure of alveolar oxygen.

"...the theory Mr Dalton had suggested to me on this subject, and which appears to be confirmed by my experiments, is that the absorption of gases by water is purely a mechanical effect"

It took some time (and the efforts of Haldane the Senior) to connect this law with the mysterious sickness affecting decompressed divers. Henry's constant for nitrogen is 1600 (atm/(mol/L)). At 0.78 atmospheres of pressure, at sea level, the nitrogen content of blood is therefore 0.488 mmol/L. At standard conditions, that nitrogen would occupy a volume of 15ml. 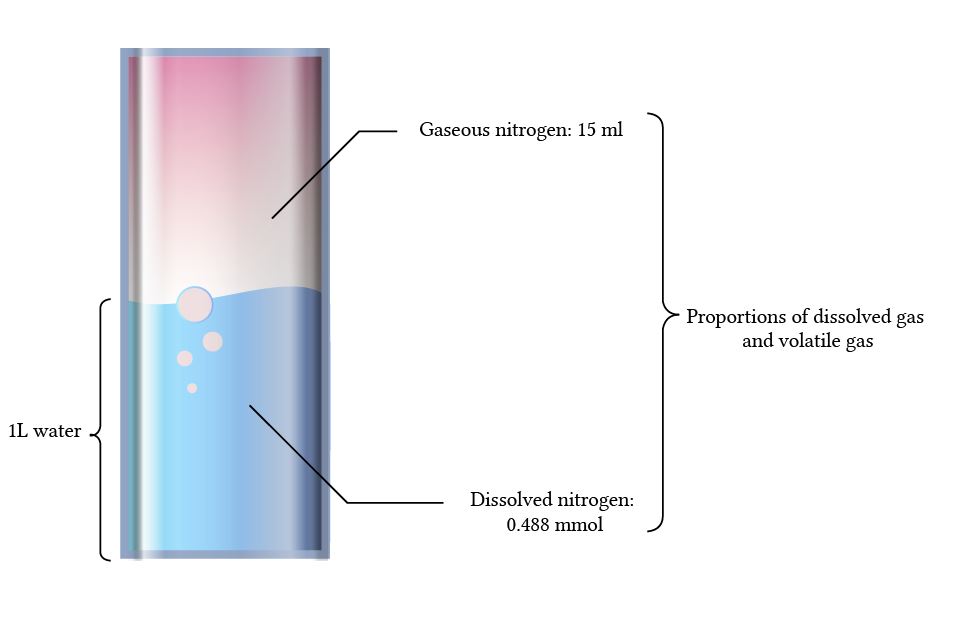 That is 15ml of nitrogen for every litre of  blood. There would obviously be more if the gas mixture were under pressure, eg. where the diver was in the depths of the sea, breathing a highly pressurised mixture of oxygen and nitrogen. One can imagine a 70kg gentleman with 5 litres of blood becoming extremely uncomfortable as several hundred millilitres of nitrogen suddenly fizz up out of their bloodstream like a shaken-up coke bottle.

Henry's law has an excellent tribute in the form of henrys-law.org, which is a reflected image of Rolf Sander's great compilation of solubility constants.

The influence of temperature on gas solubility

Note how Henry's law specifies a specific temperature. There is indeed a relationship between the temperature of the system and the solubility of a gas. For water, and for a relatively normal (i.e. survivable) range of temperatures and pressures, one can make the following generalisation:

For any given partial pressure of a gas, the solubility will be inversely proportional to temperature.

In other words, increasing temperature results in decreased solubility. This is because the dissociation of a gas in water is an exothermic reaction; heat energy is released as gas molecules occupy potential spaces between molecules of solvent. This is more relevant to polar solvents like water, which can form hydrogen bonds with the dissolved gas.  Le Chatelier's Principle demands that any system at equilibrium will react to a decrease in energy (eg. a decreasing temperature) by consuming energy (i.e. by dissolving more gas). At least this holds true for polar solvents like water, and for the range of temperatures and pressures which we are accustomed to dealing with at the bedside. In organic solvents which form no hydrogen bonds, the dissolution process can be endothermic (as energy is consumed to push aside the molecules of solvent); the solubility of oxygen in petrol will therefore increase with temperature.

This is a known thing. The solubility of oxygen in blood increases by 100% between 37 C° and 0 C°, in a fairly linear fashion. When cooling from 38 to 20 C°, if the PO2 is kept constant the increase in dissolved O2 is 31%. Indeed, this maxim holds true for almost every gas. Even inert gases are subject to his: an excellent 1980 review from Undersea Biomedical Research reports that as the temperature rises, inert gases decrease in blood solubility by 1-6% for every degree Celsius.

Of course, this whole thing is greatly complicated by the presence of impurities (such as proteins and cells) in human blood. Specifically, haemoglobin confuses things by increasing its affinity for oxygen by a whopping 2200% as temperature drops to 0 C°. At that temperature, Roughton and Severinghaus got the SaO2 at 99.5% with a PaO2 of only 11.1mmHg. Fortunately, the capacity of haemoglobin to carry oxygen is unaffected, and given the minute contribution of dissolved oxygen, the total oxygen-carrying capacity of blood remains largely unchanged over the typical range of temperatures, which is reflected in the AARC's recommendation against the routine temperature correction of blood gases.

The distinction between partial pressure and dissolved gas tension

It stands the test of logic, to say that if the gas got in there somehow, it could be got out again, and its volume carefully measured.

In this tone, one refers to an excellent article by C.S. Breathnach, which is a splendid and diagram-strewn work describing by way of medical history the various ways to extract and measure dissolved blood gases. Van Slyke and Neill's original 1924 paper is also available, as is a 2002 biography of Van Slyke.

If we recall Dalton's and Henry's Laws of Gases, we could intuitively surmise that a solution with dissolved gas in it could be compelled to give up its gas if it were exposed to an atmosphere which has none at all. This is the fundamental concept underlying manometric partial pressure measurement. Apart of acting as a source of amusement for the author, this discussion of the old-school manometric methods of blood gas analysis highlights the difference between the terms "partial pressure" and "tension", although they seem to be used randomly among the less discriminating literature sources.

The term "partial pressure" should be used exclusively to describe the fractional contribution of the gas to the mixture of gases, in terms of pressure exerted by it upon a manometer. It is the definition Dalton would approve of.

A dissolved gas, however, exerts no such pressure, and cannot be described in terms of manometry. However, following from Henry's law, the dissolved fraction exists in equilibrium with the gaseous fraction, and therefore for every tension, there is a corresponding partial pressure. By convention we refer to gas tension of a solution as the partial pressure of a gas with which that solution is in equilibrium.

The influence of gas solubility on diffusion

As mentioned several times already, one of the main determinants of diffusion is the concentration gradient. However, when it comes to gases diffusing between different body fluid compartments, the concentration gradient is in fact almost completely irrelevant, and diffusion is mainly influenced by the partial pressure of the gas, which is in turn affected by the solubility of the gas in those compartments. Specifically, the solubility of the gas will determine its partial pressure. To put it simply:

At this stage, cartoony diagrams may be needed to comprehend this concept. Observe, a scenario where there is an equilibrium of partial pressures, in spite of the fact that one compartment contains ten times as much gas:

For those who have their ANZCA primary exams just a head of them or just behind them, this concept will appear familiar. The diagram here describes a gas which has a 0.10 water/oil partition coefficient, i.e. the ratio of the concentration in water to the concentration in oil that is in contact with that water, when the partial pressure in both compartments is equal

Henry, William (January 1, 1803). "Experiments on the Quantity of Gases Absorbed by Water, at Different Temperatures, and under Different Pressures". Philosophical Transactions of the Royal Society (London) 93: 29–274.

R. Fernandez-Prini "Le Chatelier's principle and the prediction of the effect of temperature on solubilities." Journal of Chemical Education 59, no. 7 (1982): 550.