Structure and function of the lower airways

This chapter is most relevant to Section F10(iv) from the 2017 CICM Primary Syllabus, which expects the exam candidates to "Describe the function and structure of the upper, lower airway and alveolus". The alveolus is sufficiently interesting that it should get its own chapter. The upper airways (nose, oral cavity, pharynx and larynx) are quite boring, but they get their own chapter anyway. The middle conducting airways are discussed here, "conducting" being the catch-all term for air passages which have air whistling through them, but which exchange no gas.

In terms of exam value, this topic has been explored in two SAQs:

Only the adult human trachea and bronchi were asked about. The college comments in this instance were particularly helpful, two standard deviations from the norm. They were in fact some semblance of a marking criteria, or something like a grading rubric to describe the minimal expected standard. "To pass this question, the following were required for each section" they start. Those main components were landmarks, basic structural anatomy, and important relations ("major vessels; major nerves; major structures"). Innervation, arterial supply and venous drainage attracted further marks. This is an excellent college answer; if only there were more like it. It has aided in the structuring of this chapter.

Multiple possible peer-reviewed resources exist to describe the anatomy of the upper and lower airway. The single best reference would probably have to be Chapter 1 from the 8th edition of Nunn's Applied Respiratory Physiology (previous editions seem to start with a chapter titled The Atmosphere, which digresses awesomely from the main thrust of the textbook). Nunn's is not free, but the penniless CICM trainee can find virtually the same information in Mete & Akbudak (2018). These guys were clearly writing for the anaesthetics population - the upper airway and larynx are very well covered but they stop at the main bronchi. Because the College of Intensive Care Medicine does not usually care about a surgical level of detail in their anatomy questions, only the trachea and the bronchi will be covered exhaustively; for detailed explanations of the other structures, the exam candidates will need to refer to Last's or something similar. Speaking of which, Last's (8th edition) was the main resource for the macroanatomical details presented here.

Structure and function of the trachea

In order for this chapter to maintain some exam relevance, there needs to be a section dedicated to answering  Question 24 from the second paper of 2016, where anatomical relationships of the trachea and bronchi were discussed. A tearfully boring list of anatomical relations follows: 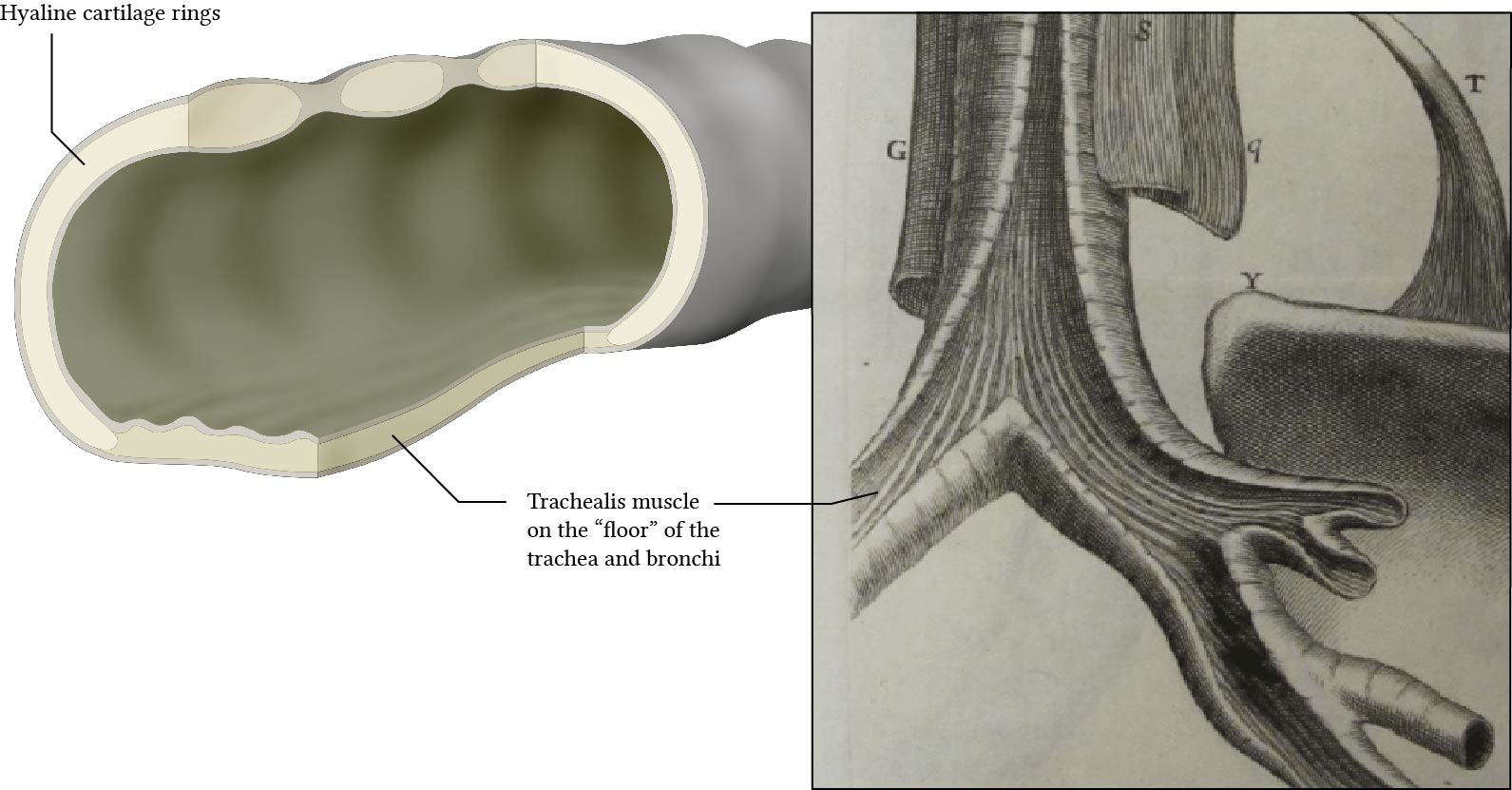 The main macroscopic elements which are unique here are the U-shaped cartilaginous rings. The hyaline cartilage is very thick in the trachea, which makes sense because its main function is basically not to implode under the pressure of normal respiration. The first chapter from Nunn's  (8th ed, p.6) asserts that 40 cm H2O is an external pressure sufficient to cause tracheal occlusion. This is not referenced but is a fascinating piece of information. Searching more broadly, one encounters some data in Funk & Schuppel's "Strangulation injuries" (2003). According to these authors, 33 lb of pressure (14.9 kg) is required to completely obstruct the trachea. Following this digression to its inevitable excess, one may also find data on how much internal pressure is required to rupture the trachea from the inside. According to Chen et al (2001), this is very difficult to do even when you are trying to do it intentionally. Among intubated cadavers, a tracheal rupture occurred only after 75ml of air were insufflated into the tracheal balloon, at which point the investigators' manometer had already long maxed out at 120 cm H2O. An example of the author's handiwork is offered below,  though it serves no specific educational reason. 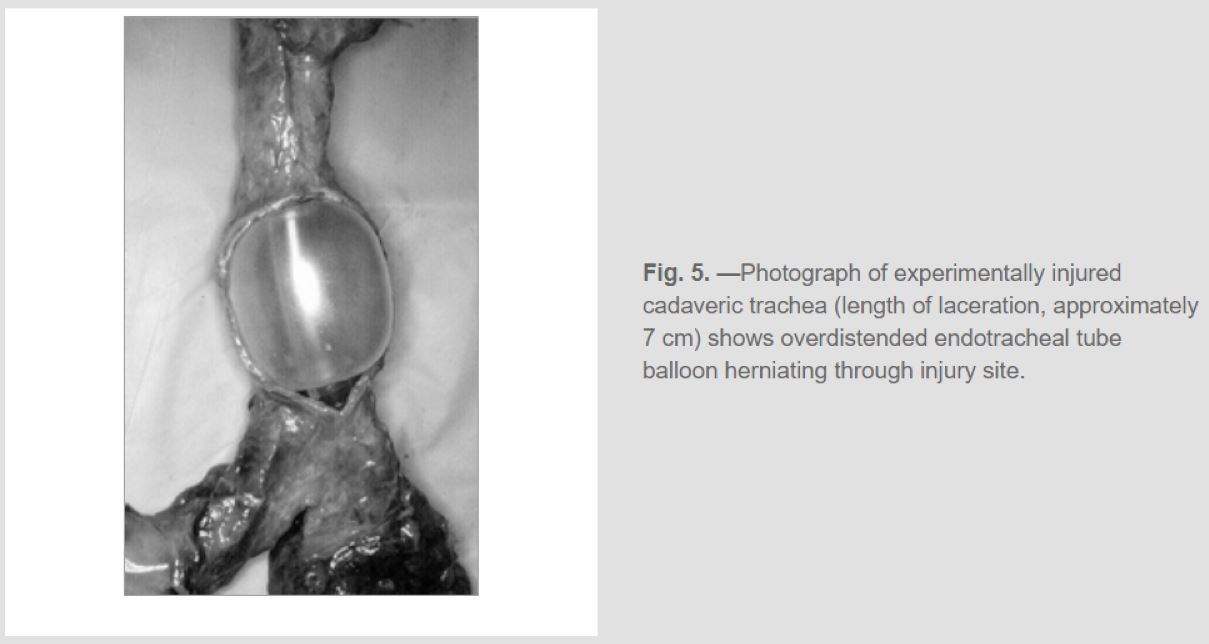 In contrast to the above, there is possible exam relevance in the histology of the trachea and bronchi. To look closer at the trachea's fine structure, one may go to legitimate sources, or rely on unproven non-peer-reviewed websites. Generally, all sources feature one common trope: a cutaway section of the tracheal or bronchial mucosa, demonstrating the main components. 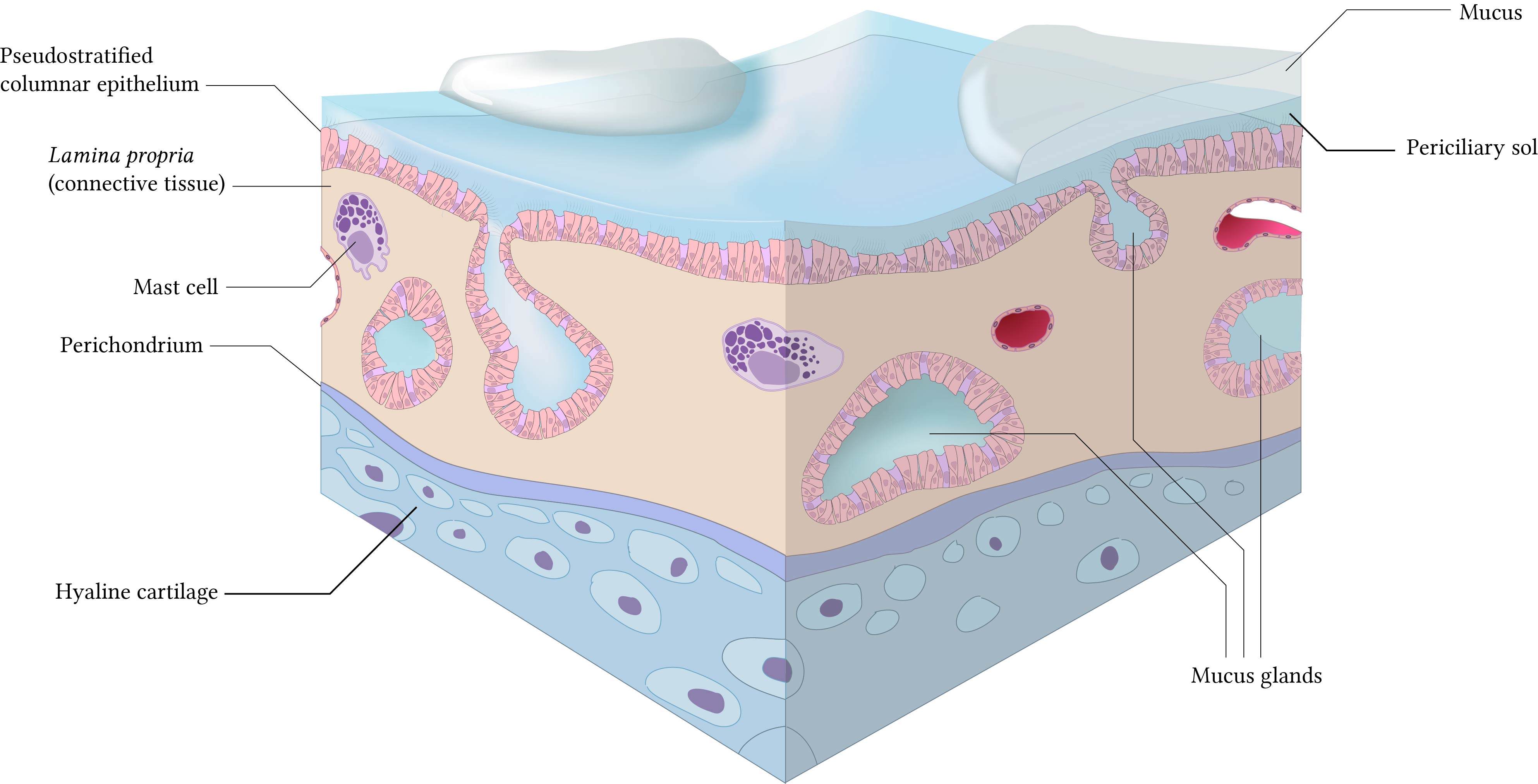 Histologically, the mucosa here is a pseudostratified columnar epithelium (pseudostratified because the nuclei are positioned at different depths in the cell column, suggesting at first glance that there are multiple layers of cells). This mucosa is rich in mucus glands and goblet cells. Nunn's claims there are 6,000 per mm2. By secreting mucus, these make themselves critically important for the maintenance of the mucociliary escalator.

Structure and function of the bronchi

Broadly, if one needed to describe the bronchi anatomically, one could borrow a cold surgical description from Last's:

Generations of the tracheobronchial tree

Wherever one finds a reference to the tracheobronchial tree, one tends to find references to "generations" of bronchi. We owe this concept to Ewald Rudolf Weibel, who in 1962 attempted to bring order to the lawless field of lung anatomy. For the larger airways, Weibel and Gomez relied on vinyl resin casts of the bronchial tree created by A.A Liebow (Weibel himself uploaded this image to ResearchGate, making it easier to respectfully misappropriate) 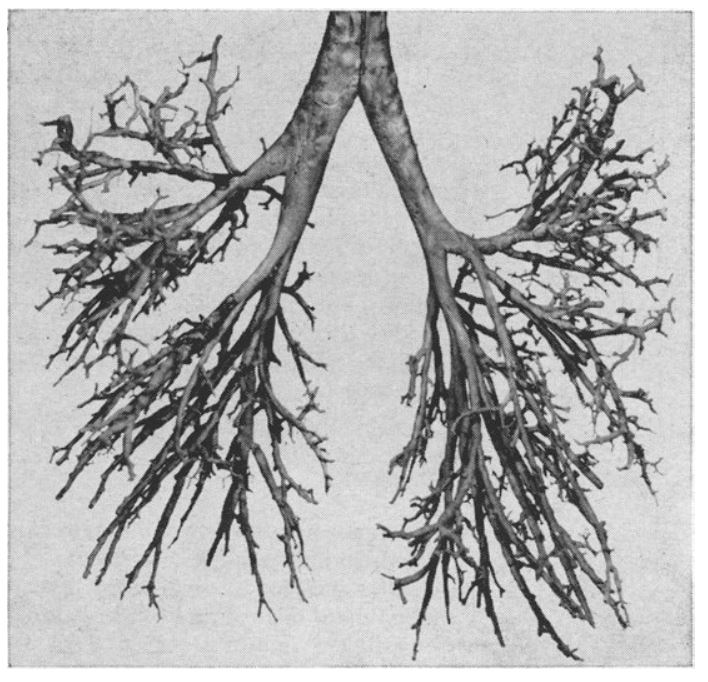 Examination of these casts revealed some basic rules. For one, each bronchus branches into two smaller bronchi. This is called dichotomous branching and is apparently very common in nature.  Each branching, therefore, can be described as a "generation", each of which contains double the airways of the previous generation. Though Weibel and Gomez claimed to have examined over 10,000 branchings, all of which were apparently dichotomous, Nunn's textbook sows doubt by suggesting that there may be trifurcations (Sauret et al in 2002 did a study of a 3D reconstruction from CT scans and found a few trifurcations here and there). 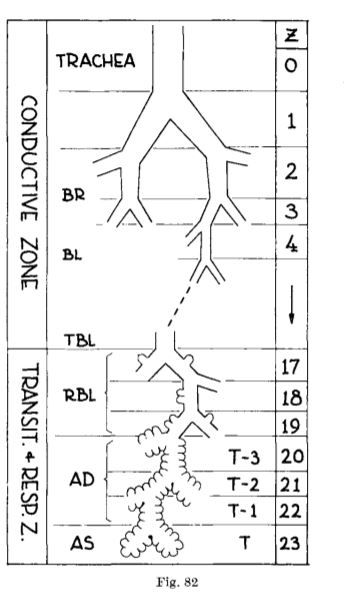 These were numbered by Weibel. The "zeroth" generation is the trachea. The right and left main bronchi are considered to be Generation 1. The conducting airways keep branching until the terminal bronchioles at Generation 16, beyond which lie the "respiratory airways".

Small airways are usually defined as those airways of less than 2 mm internal diameter and equate to generations 12–23 of Weibel’s model of lung architecture. There is nothing beyond the 23rd generation except for the alveoli.

In order to help this make sense, one may be able to compile the generations into a diagram which is present in every edition of Nunn's and which is attributed to Weibel's Morphometry of the Human lung (1963). Though it would be difficult (and pointless) for the modern student to acquire a copy of the whole original book, the diagram is reproduced here out of respect for the memory of the author (1929-2019).

One may also tabulate these data to make it easier for the student to rapidly recall where the ciliated epithelium ends (for example). Most such tables occupy an entire A4 page in landscape format, and are as information-dense as they are unwieldy. This does not lend itself very well to revision. The table below is a version which has been trimmed of all irrelevant fat. Wherever Weibel and Nunn's disagree, Nunn's was upheld as the canonical Scrabble Dictionary source.

Structural and functional divisions in the bronchial tree

Functional divisions are into conducting and respiratory airways

An acinus is a functional unit of lung distal to a single terminal bronchiole. It contains:

The “mucociliary escalator” is basically a system for clearing material from the lower airways by constant mouthward migration of respiratory mucus. The first time this system appears by this name seems to be Davies (1949), at which stage the term is used as if was common to the physician's vernacular. Presumably, it hasn't always been called an "escalator", presumably because there haven't always been escalators (the first commercial models were made available around the late 1890s).

Anyway. The "escalator" consists of a constantly moving conveyer belt made of respiratory mucus, moved along by the coordinated action of a ciliated epithelial layer which extends from the terminal bronchioles to the larynx. The theory is, the airways branch, cross-sectional area increases, airflow slows, and the small particles being carried by the inspired flow settle on to the mucus layer. The ciliated cells then patiently heave this dirty mucus towards the upper airway, where it collects to be coughed out. The cilia beat in a relatively thin watery layer called the "periciliary sol", on top of which islands of mucus float like lily pads. Though each individual cilium is probably quite feeble, there are about 200 of them on every epithelial cell, and the total force generated by them is substantial. Maxwell (1905), using the ciliated epithelium of a frogs' mouth, tested this force by observing the movement of weights which were placed on top of the specimen. The ciliated cells were able to move a 10g weight against gravity, on a ten-degree incline. The rate of mucus movement is surprisingly brisk - the recorded velocities of marker particles are approximately 5-20 mm per minute (Clark & Pavia, 1980).

What is mucus, you might ask, and - theoretically - how much could a normal person possibly produce? A valid and clinically relevant question. Fahy & Dickey (2010) go into more detail than anybody could possibly need in answering it, and that reference would probably suffice, but it would be out of character for Deranged Physiology not to also offer a 388-page textbook dedicated to airway mucus.  Basically, it is 97% water, and 3% mucin - a glycoprotein which is up to 90% carbohydrate and highly anionic. When well hydrated, the tangled strands of mucin slide politely along each other, but with dehydration the properties of respiratory mucus change significantly. Mucus which is dehydrated down to a water content of 85% or less becomes viscous, sticky and elastic, which prevents its clearance.  Assuming a normal tracheal diameter, mucus layer thickness and mucociliary transport velocity (2cm and 5-10mm/min respectively), one can calculate that the average daily mucus flow rate is approximately 18-36 ml/day.

Knight, Darryl A., and Stephen T. Holgate. "The airway epithelium: structural and functional properties in health and disease." Respirology 8.4 (2003): 432-446.