Anatomy of the pulmonary and bronchial circulation

This chapter is most relevant to Section F1(iv) from the 2017 CICM Primary Syllabus, which expects the exam candidates to be able to "outline the anatomy of the pulmonary and bronchial circulations." Notable is the (surely, carefully chosen) wording of "outline", by which the college usually mean "provide a summary of the important points". This is in contrast to the usual "understand" or "describe", and so presumably less depth is required. How much depth, precisely? That is unclear, considering especially the fact that this is a rarely a topic for CICM exam questions. The only impression of the examiners' expectations comes from Question 13 from the second paper of 2020, where the examiners wrote:

"As well as a description of the gross anatomy of the pulmonary circulation tracking it from the pulmonary valve to the left atrium, some mention of the microscopic anatomy was required (e.g., that the pulmonary arteries are thin walled with little smooth muscle)."

With this in mind, the time-poor exam candidate can comfortably limit their revision to what follows.

If excessive detail is for some reason called for, one may choose from a broad range of sources. Official college-recommended textbooks are useless; every edition of Nunn's has a chapter on the pulmonary circulation (p.89 in the 8th edition), but none of them contain any anatomical or structural information.  Consequently, the best single reference for this topic is Townsley (2011), which also happens to be free. If it has flaws, it would be that it is too comprehensive. Another good vintage article is Singhal et al, their 1973 paper on the pulmonary circulation is something of a classic. If one has literally infinite time resources, one may submerge into the pulmonary vascular scientific literature of the seventies (eg. Hislop & Reid, 1978) which, though dated, contains structural and anatomical material which is unlikely to have undergone any surprising change over the last forty years.

Mid-size and small structures in the lung like to stick together along their path to and from the acinus, and it can generally be said that pulmonary vessels and bronchi co-occupy the space of a fibrous sheath together with a few other ancillary structures. These are described as "bronchovascular bundles".

In summary, the contents of a typical mid-sized bronchovascular bundle are:

One may even try to represent these diagrammatically, an attempt which lends itself well to a beginner's level of command over Illustrator: 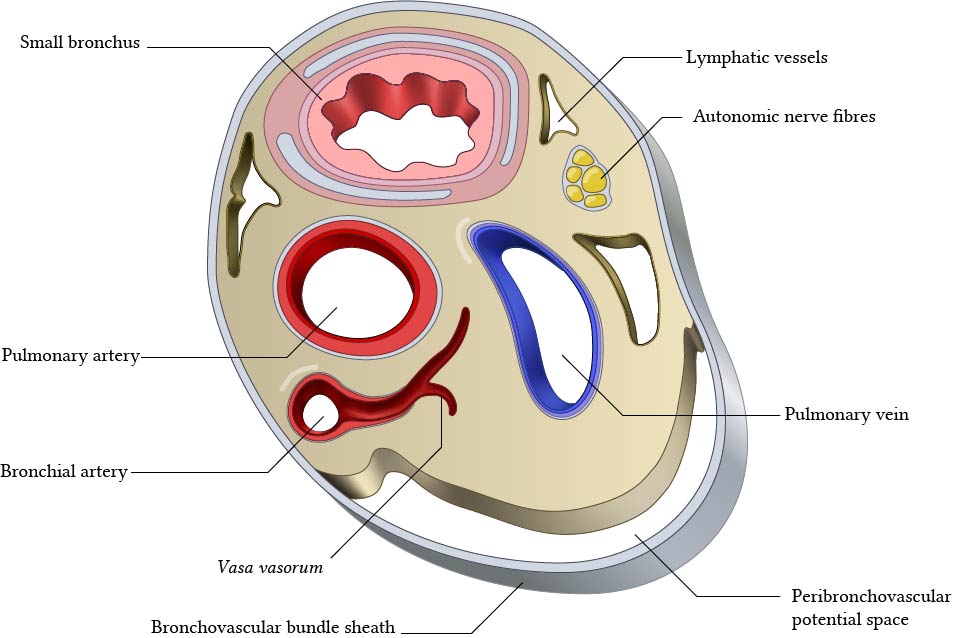 The position of the veins in this bundle is somewhat controversial. In human lungs, unlike some other mammals, the veins are not consistently in the bronchovascular bundle. Large pulmonary veins seem to be outside of the bronchoarterial bundle sheath, and they take their own path back to the atrium. At some mid-point, small bronchi and vascular structures are all bundled together in a common adventitious sheath. More distally, the connective tissue packed around these elements disappears; the arteries at this scale share their adventitial connective tissue with that of the bronchi, and the pulmonary veins are somewhat apart, sitting in the interlobular septa.

These sheaths of connective tissue are viewed as extensions of the pleura. The pulmonary arteries and bronchi do not escape from these sheaths until the level of the terminal air spaces, where the smallest of the arteries and veins (under 50 μm) are surrounded by and are in direct contact with the walls of alveoli (Michel, 1982). This has some significance for the intravascular resistance of this portion of the circulation. Whereas thicker cartilaginous bronchi and large arteries are well-insulated by pressure-absorbing wads of connective tissue, small vessels are in more direct contact with the alveoli, and therefore alveolar pressure is transmitted easily to those vessels. That's probably important for things like West's zones of the lung and for the influence of positive pressure ventilation of right heart afterload, all of which are discussed in greater detail elsewhere.

There are several ways of classifying the branches of pulmonary vessels. This diagram (stolen shamelessly from Rizzo et al, 2014) illustrates those models. None of them is perfect.

One way is to number these in the same way as we number bronchi, i.e. in dichotomously branching generations, successively becoming smaller in diameter (and with the generations increasing in number, eg. generation 1 is the largest, generation 2 is the next smallest, and so on). This is the Weibel model - it is exactly what they used for bronchi. The problem with this is that pulmonary vessels do not branch dichotomously. A large number of "supernumerary" arteries take off from the main branches, which are small arteries often one tenth the size of their parent branches (Horsfield, 1984).

The alternative method of classifying these vessels is in orders, starting with Order 1 (vessels which are 10-15 μm in diameter). By this classification system, the main pulmonary artery of each lung ends up being Order 17 (Horsfield, 1978). Because of the disagreement of how exactly to classify orders in the presence of supernumerary arteries, everybody who tries to morphometrically analyse the pulmonary circulation ends up producing a frustratingly different system of orders or generations, a problem exacerbated by their tendency to use different mammals.

Another possible method is to specify arbitrary diameters as the definition, and use that. This is perhaps the least satisfying classification system. For one, a single length of unbranching vessel may have two or three orders along its length purely because it tapers. One same order of classification may capture several groups of vessels with different functional and structural properties, purely because they are all the same diameter. And who gets to decide what the diameter cut-off would be for each grouping? This is a recipe for extensive academic arguments between professors who have white hair coming out of their ears.

Because of not-insignificant problems of nomenclature, it is better to classify these vessels in some way which is descriptive of the relationship between their structure and function. Townsley (2011) tries to do this by separating vessels into the following broad categories, in order of decreasing diameter.

As one can see, most of the differences between these groups of vessels are differences in the contents of the media layer. Hislop & Reid (1978) and Sasaki et al (1995) are the best sources to describe the arterial structures, though their studies are based on the organisation of the rat lung. In fact Sasaki et al were able to subdivide the muscular arteries into even more structural classes, which they claimed to have determined distinct functional roles for. For example, muscular arteries can be further subdivided into "thick", "ordinary" and "partially muscular". Their table describing these structures and comparing different classification systems is included here for completeness.

The discussion of overmuch anatomical detail, with regards to relations and innervation and suchlike, is perhaps best left here as a reference rather than being entered into earnestly for the purposes of CICM trainee revision. The anatomically disinterested author may inadvertently publish errors which the trainees could dutifully regurgitate in the exam, losing marks thereby. As such, one is directed to publications such as the free article by Kandathil et al (2018) and the paywalled paper by Fréchette et al (2006). Deferring to the expertise of these scholars, this chapter will only reproduce an image from one of their articles (attributed to a young Erino A. Rendina), which was lightly photoshopped to add colour. 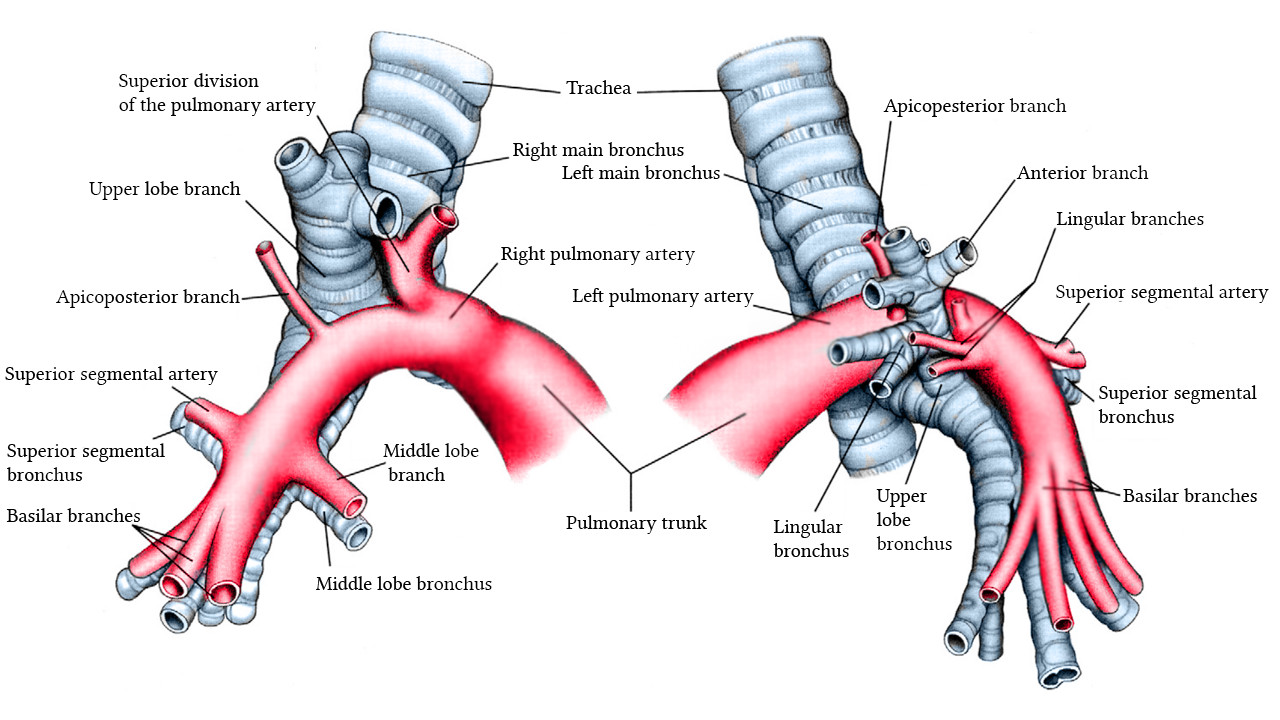 These represent the next smallest order of pulmonary vasculature. Their main defining characteristic is the smooth muscle in their media. The more proximal muscular arteries have a substantially beefier media with multiple layers of smooth muscle cells encircling the lumen. By and large, this is where the magic of pulmonary vascular resistance regulation happens. As the arteries get smaller and smaller their muscularity decreases, and the smallest of these are only partially muscularised, with patchy intermittent areas of smooth muscle. According to Townsley, these partially muscular arteries range in diameters from 230 to 35 μm, i.e the diameter of six or seven red cells lad end-to-end. These are the sort of vessels one finds close to the alveolar ducts; at that level of the bronchial tree, only about 25% of the arteries have any smooth muscle in them. The thin (minimal; or altogether non-existent) media and adventitia layers are very close to the alveoli, which means alveolar gas pressure can be transmitted to them, influencing pulmonary vascular resistance. Like with most things in the respiratory system, the discussion of their structure is less interesting than the discussion of their function.

Though usually, one thinks of capillaries as tube-ish cylindrical structures, in the lung they are so close together that their length is usually shorter than their width. Rosenquist et al (1973) is probably the best paper to discuss what that means. The sketched diagram in their article has been reproduced in numerous textbooks, and looks approximately like this:

Though highly stylised and grossly disproportionate anatomically, this probably represents the basic gist of the capillary sheet concept. Basically, rather than a network of tubes, one can view this structure as a wide cavern, with the ceiling held up by thick columns, they being the "intercapillary posts".  Capillaries and blood, therefore, make up most of the volume of the alveolar wall, and about 30% of its cellular mass (Crapo et al, 1982).

As will become relevant later, these capillaries are quite short. Staub et al (1968) measured the length of capillary-like vessels in animal lungs and ended up with a figure of around 600 μm on average (this was the length of the vessels which connected arterioles and venules less than 60 μm in diameter).  This becomes important when one considers the effect of capillary transit time on oxygenation.

The largest pulmonary veins flow seamlessly into the left atrium. Unlike the large arteries, these vessels have less elastic fibres in them and are mainly muscular. There is no anatomical fold or border to act as a convenient distinction between atrium and vein, and microscopically the endothelium of the veins is indistinguishable from the endocardium of the atria (Klimek-Piotrowska, 2016).  These greater vessels at their widest are still only about half the width of the pulmonary arteries (i.e. about 15mm in diameter).

The cells in the walls of pulmonary vessels do not derive their nutrition from the pulmonary blood, but rather from the systemic circulation. The walls of these vessels contain vasa vasorum which originate from bronchial arteries. The right bronchial artery arises from an intercostal artery, and on the left, there are usually two arteries with separate origins arising from the aorta. The artwork shown below was originally credited to Dr Thomas Rice, and was stolen shamelessly from Fréchette et al (2006). 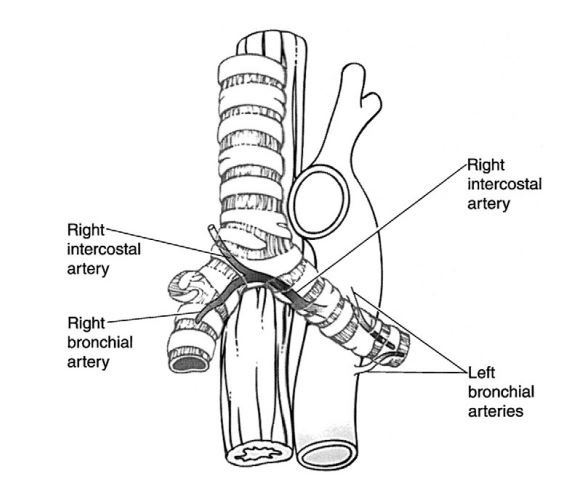 This is probably one of those things which - when committed to memory - adds to the baggage of pointless data accumulated in the course of medical training, serving no purpose until these vessels become the destination of embolised coils or foam. 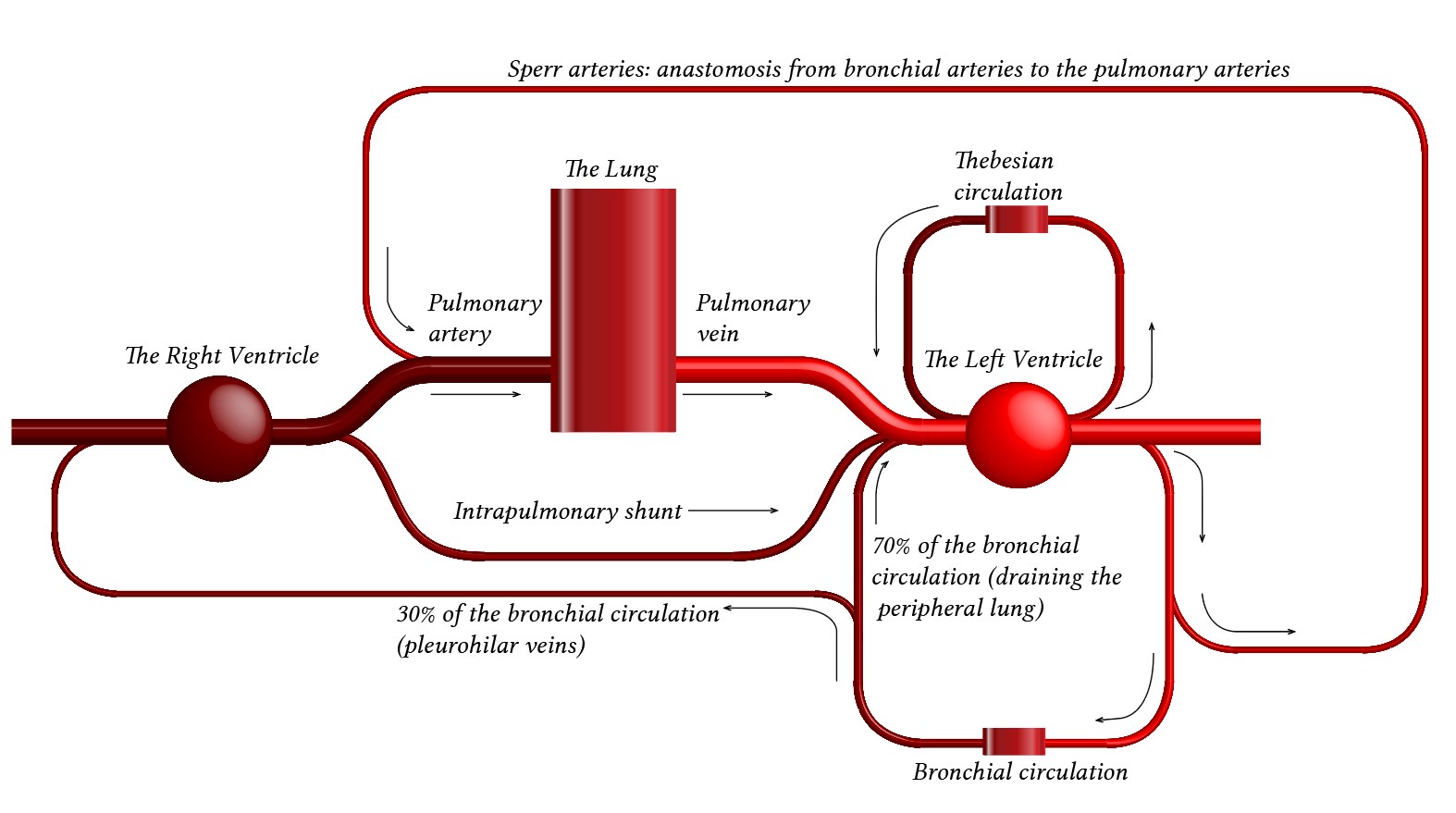 If one needed to put this tube picture into words, one could probably do so:

Generally, it seems the sympathetic fibres outnumber the parasympathetic ones. This image from Verity et al (1968) illustrates the innervation of a pulmonary vessel. 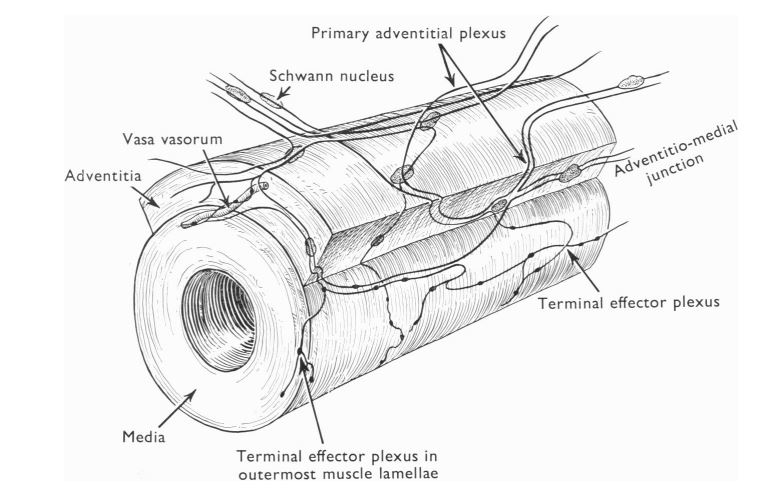