Roles of the chest wall and diaphragm in respiratory mechanics

This chapter is most relevant to Section F1(iii) from the 2017 CICM Primary Syllabus, which expects the exam candidates to be able to "describe the structure of the chest wall and diaphragm and to relate these to respiratory mechanics". This appears to be a high-yield topic which comes up multiple times in the exam:

Thus far the past papers have been largely musculocentric and no questions regarding the involvement of the skeleton have been asked, but it seems relevant to discuss it here anyway. The relevance of the bones in respiratory function becomes suddenly more apparent when they break and start flailing unproductively.

In terms of published resources, the official college textbooks are surprisingly effective. Chapter 56 from the 8th edition of Nunns contains enough material to easily pass the abovelisted SAQs. For a free alternative, one may easily use Luce & Culver (1982) - they cover the same ground, but with more detail regarding the effects of lung pathology on respiratory muscle use.  For just the chest wall muscles, one could not do better than De Troyer et al (2005). For the diaphragm, Poole et al (1997) is best, though it is paywalled.

Role of the upper airway muscles in respiration

Without recapitulating the content of the upper airway anatomy chapter, it will suffice to say that the upper airway muscles are at least as important as the diaphragm and chest wall because they maintain airway patency during inspiration. Certainly, the examiners felt strongly enough about this that in their marking of Question 14 from the second paper of 2010 candidates who omitted this aspect "failed to achieve a good score".

Anatomy of the diaphragm

Anatomy of the diaphragm can be described in a boring fashion, following the normal pattern used by anatomy textbooks. Most of this information is from Last's (9th ed, p. 248-251). In summary:

Anatomical features which are important to its function, if one could isolate those, would probably have to include the following:

Function of the diaphragm

In short, the diaphragm contracts,  flattens, and intrathoracic volume increases thereby. Gauthier et al (1994) performed some 3-dimensional reconstructions of chest CTs and produced some excellent images to illustrate the change in its shape during inspiration: 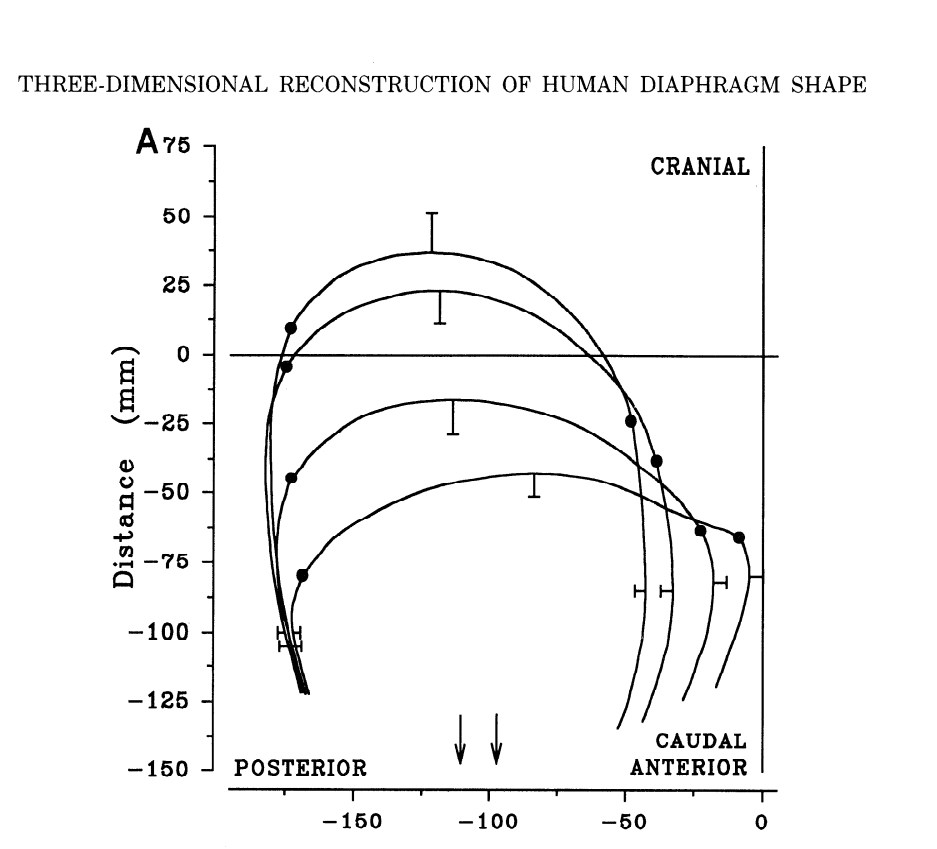 To be more specific, the diaphragm performs the following movements:

The piston-like downward movement accounts for 90% of the volume change seen during normal restful breathing. As you inhale more and more deeply, the flattening of the diaphragm against the counterpressure of abdominal muscles and their contents produces an increase in the circumference of the lower ribcage.

The diaphragm on its own does most of the work of breathing, but it appears that without the other muscles of respiration working in a coordinated effort, the diaphragm does not achieve the correct pattern of thoracic volume expansion. Danon et al (1979) looked at this in a group of C1 quadriplegics. The diaphragm, when paced independently of other respiratory muscles, did something weird to the ribcage: the lateral diameter increased, but the anteroposterior diameter decreased. In short, the chest flattened and widened on inspiration. "Quiet inspiration is not accomplished by the diaphragm alone but rather by coordinated activity of the diaphragm, rib cage inspiratory muscles, and possibly the abdominal muscles as well" the authors concluded.

There is a "zone of apposition" which is a posterior portion of the pleural space where there is no lung and the diaphragm is directly apposed with the rib cage. This area, in normal breathing, is surprisingly vast (according to Gauthier et al,  at FRC in the upright position 55% of the diaphragm's surface is apposed with the ribs in this fashion). To again borrow the reconstructions from  Gauthier et al, this can be better explained in a diagram: 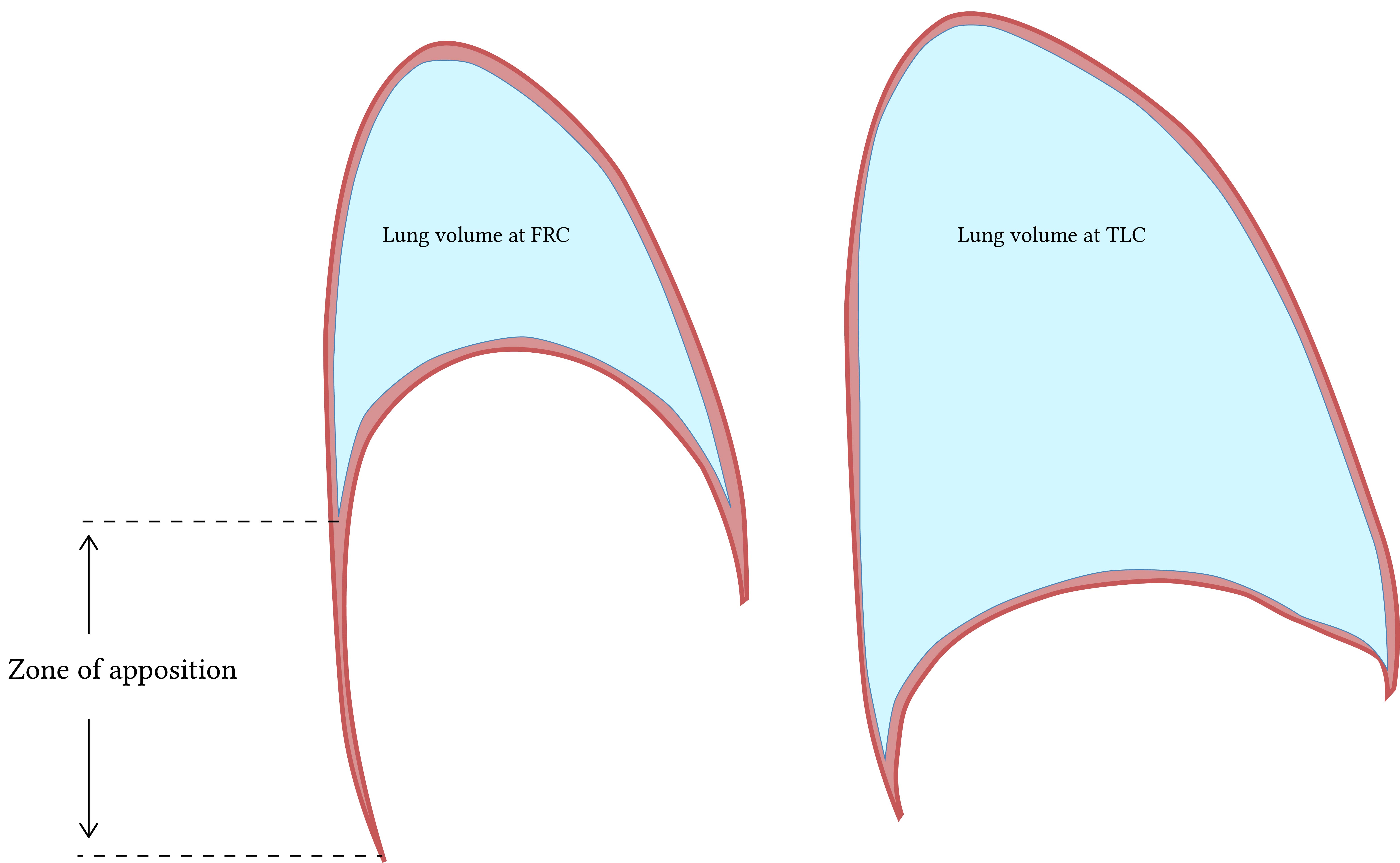 This zone of apposition should be viewed as something of a marker of respiratory reserve. With increased inflation (COPD, asthma, etc) the diaphragm, flattened as it is, has less room to move, and its contraction will be less effective.

Apart from acting as a respiratory piston, the diaphragm has important non-respiratory functions:

Hiccups is also a diaphragmatic phenomenon, and though one cannot describe it as a "function" with a straight face, it is still worth mentioning.

In addition to the internal and external intercostals, there are a few more minor players:

Their function can be summarised as "expand the chest cavity diameter". This is accomplished by the combination of tow movements:

The net effect of these functions is to increase the diameter of the thoracic cavity (particularly the lower thorax). It is important to emphasise that the inspiratory work is mainly done by the external intercostals, whereas the internal intercostals have a predominantly expiratory role (i.e. by contracting they depress the ribs). Wherever the diaphragm is unable to fulfil its role (eg. bilateral phrenic nerve paralysis or poor excursion due to flattening in COPD) these muscles will be recruited to the role of primary respiratory motors.  And they will suck at this job, as the diaphragm does around 80% of the inspiratory work. Hart et al (2002) found a group of patients with differing degrees of unilateral and bilateral diaphragmatic paralysis and examined their responses to exercise. It turned out that a unilaterally paralysed diaphragm was essentially a non-issue: these patients had a relatively normal response to exercise load. In contrast, patients with bilateral diaphragm paralysis had a lower peak minute volume (60% of what is expected from healthy controls) and used much more oxygen to achieve it, suggesting that their ventilation was inefficient as well as ineffective.

Contribution of abdominal muscles to respiration

The abdominal muscles involved in respiration include:

Montes et al (2016) found that the transversus abdominis and internal oblique seems to be the most relevant muscles for breathing mechanics. These maintain intra-abdominal pressure and act during expiration to push the diaphragm back up into the chest, augmenting the passive recoil of the lungs. Fortunately, most of the time these muscles are not relaxed anyway - for instance, they are contracting constantly to help maintain posture. As such, there is always some positive intraabdominal pressure to help stuff the relaxing diaphragm back up into the chest.

These muscles are probably either minor players or completely inactive in normal quiet breathing.  Moreover, the effects of posture seem to matter. When supine, abdominal contents is encouraged into the chest by gravity, and so abdominal muscles are not usually needed. In the upright position, they may be required with relatively modest respiratory effort.

Again according to a number produced by Nunn's with no reference, their forceful expiratory activity doesn't really appear until one's minute volume is around 40L/min. This probably comes from studies such as Goldman et al (1987), who stabbed up to 24 EMG needles into his patients to record abdominal muscle activity at different respiratory efforts. Abdominal muscle contraction activity was first detected at a minute volume of 102L/min for supine patients and 88L/min for semirecumbent ones (40° head up).

These extrathoracic muscles are recruited to assist respiratory effort when the energy requirements of ventilation are increased, whether because the requirement for minute ventilation is increased or because it is requiring more effort to achieve a normal minute volume (eg. where lung compliance has deteriorated).

Variably, the scalene muscles are group with this bunch, even though some authors group them together with the intercostals as they are also involved in quiet low-effort respiration (Campbell, 1958).

So, how much effort is required before one resorts to using these muscle groups?  Nunn's gives a figure of 50L/min as the roundabout figure, though it is not clear where that comes from. As effort increases, scalene activity increases first, then the sternocleidomastoids, then the others.

Campbell, E. J. M. "The role of the scalene and sternomastoid muscles in breathing in normal subjects. An electromyographic study." Journal of anatomy 89.Pt 3 (1955): 378.

Montes, António Mesquita, et al. "Abdominal muscle activity during breathing with and without inspiratory and expiratory loads in healthy subjects." Journal of Electromyography and Kinesiology 30 (2016): 143-150.