This chapter is most relevant to Section F3(ii) from the 2017 CICM Primary Syllabus, which expects the exam candidates to be able to "define compliance (static, dynamic and specific)". This has been a popular topic for SAQs:

Most of these SAQs ask for a definition of compliance, as well as methods of measuring compliance. Question 14 from 2016 and Question 1(p.2) from the second paper of 2008 also asked for factors which affect compliance. Though it was not specifically asked for, the distinction between static and dynamic compliance seems to be an expected feature of a high-scoring definition, according to the examiner comments. Specific compliance has never been mentioned in any of the questions and appears to be absent from the vivas, or what little we know of them.

In terms of published peer-reviewed resources, none is better than Scott Harris' article from 2005. It is available for free from Respiratory Care. It would be easy to stick with this free article as one's main source of information. The compliance section from Nunn's (p.29-31 of the 8th edition) is also worth reading, but does not contain any reference to specific compliance (not that it's ever come up in the written papers).

The 8th edition of Nunn's gives the following definition of lung compliance (p. 17):

"Lung compliance is defined as the change in lung volume per unit change in transmural pressure gradient (i.e. between the alveolus and pleural space)."

This closely resembles any other definition of lung compliance. For example, Guyton & Hall (13th ed) define it as "the extent to which the lungs will expand for each unit increase in transpulmonary pressure (if enough time is allowed to reach equilibrium)", which sounds like they were defining static compliance.  For the most basic form, one may look to Levitzky's Pulmonary Physiology (8th ed.) which simply states that "compliance is defined as the change in volume divided by the change in pressure".  For the purposes of abbreviating this concept even further to cut precious seconds from the answer writing time:

Static compliance has been defined variably by many authors, but most of the definitions have a single common focus on the absence of flow and the time allowed for the mobile elements of the respiratory system to relax and come to rest. "A static P-V curve eliminates the resistive and impedance effects on pressure", explains Harris (2005); what's left, supposedly, is just the compliance of the lung, the unadulterated pressure-volume relationship. Borrowing and slightly modifying a definition from Miller's Anesthesia:

Static compliance is change in volume divided by change in pressure, measured in the absence of gas flow.

A definition like this suggests that to measure static compliance, all you need to do is stop the gas flow. In reality, this is usually not true. Say you are measuring compliance. The moment you close the respiratory circuit after inspiration, you will note a pressure drop which is due to the gas redistributing between lung units with different time-constants. Surely, you'd say, this is not a "static" process, and choose to wait some seconds before recording the measurement. However, as the seconds pass, you may note that the measured volume of the lung decreases. This is due to the fact that the gas contained within is being absorbed into the pulmonary circulation. Therefore, in the living human organism, there is never going to be a situation where a truly static pressure-volume relationship can be recorded, and Harris (2005) recommends the term "quasi-static" to describe them.

In terms of exam relevance, apart from the abovestated definition, one may safely expect to be asked to draw a diagram to represent the pressure and volume relationhsip of the human lung. If so, one could do worse than reproduce the famous relationship described by Rahn et al in 1946, which was for some reason the first of such efforts. "It is remarkable that physiologists have paid so little attention in the past to the mechanics of breathing that no adequate data are now on record concerning the pressure-volume characteristics of the chest and lungs in normal men", the authors complained.  They acquired normal men, occluded their nostrils with cork stoppers, and measured their airway pressures at different fractions of their vital capacity (the subjects exhaled fully and then inspired a known volume of gas from the spirometer before performing a breath hold). With these manoeuvres, the following relationship was demonstrated: 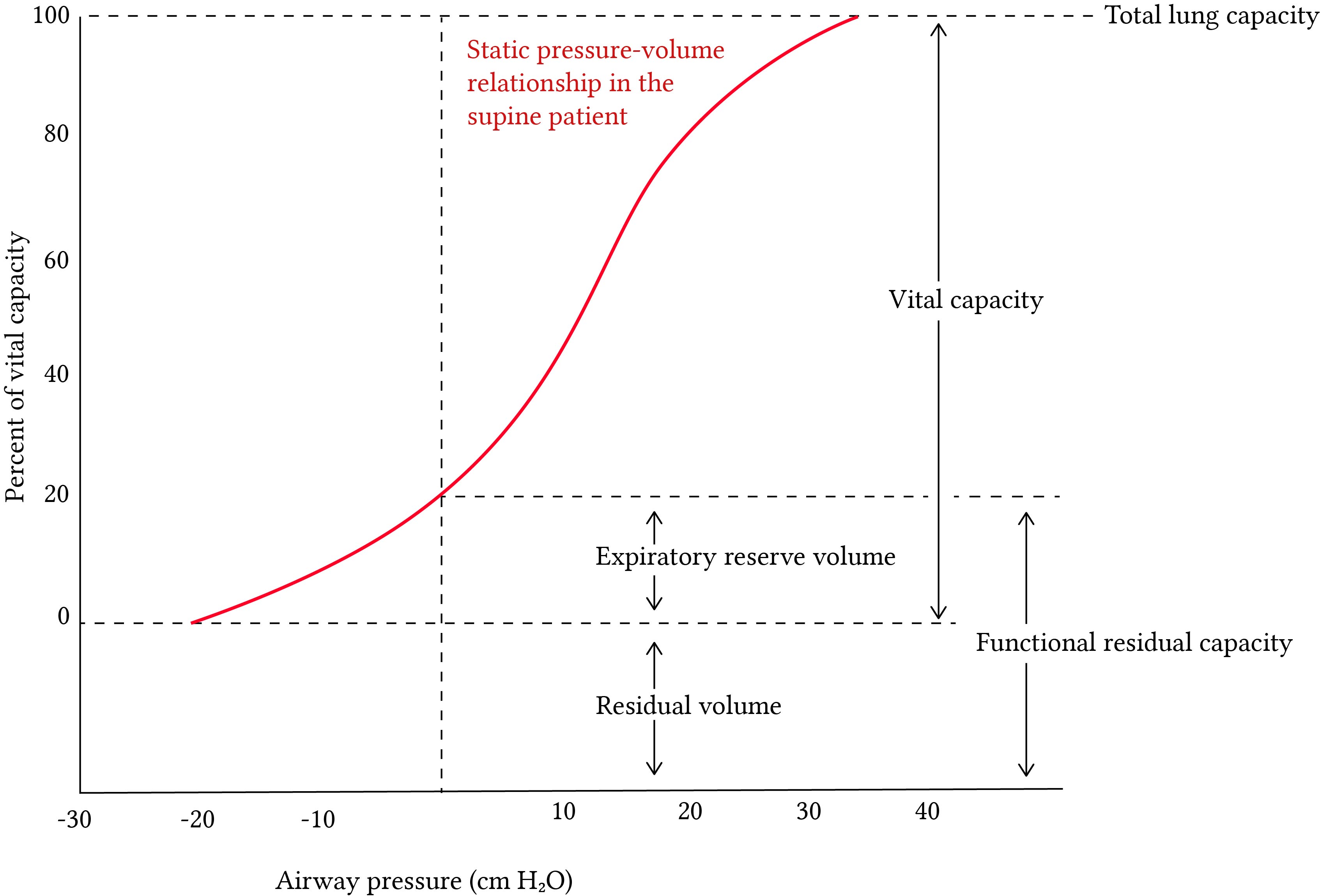 The diagram above is identical to Figure 6 from the original paper, but it was gentrified slightly to modernise it for consumption by modern readers (nobody calls that volume "residual air" any more). It demonstrates the classical lung compliance curve, where the compliance is poor at low and high volumes, but optimal just above the FRC, i.e. in the range of the normal tidal volume.

Obviously, when you pump gas into a person's chest, the pressure-volume relationship is going to be a complex combination of several factors. Of these, the dominant players will be the chest wall and the tissues of the lung itself. When asked to desribe this concept, a CICM trainee would likely be expected to regurgitate this equation:

The compliance of the lungs and chest wall are related to the elastic properties of these structures, which are discussed in a chapter all of their own.

Under normal conditions (i.e where it is not filled with saline), the lung does not behave as an ideal system, i.e. the energy invested in its distension is not returned upon deflation. The upshot of this is that inflation and deflation have different pressure-volume relationships, and the difference between them is called "hysteresis", a term etymologically related to "lag" or shortcoming" which describes the dependence of a system's state upon its history. If one were completely unprepared for the questions "define hysteresis", one could easily break down and blather something like "the inspratory thing does not look like the expiratory thing", so it would probably be worth investing some time in memorising a more solid definition. Here's one from an excellent article by Escolar & Escolar (2004):

"The energy applied to the lung in inspiration is not recovered in expiration. The property of dissipating energy receives the name of hysteresis."

A pithier, more memorable definition is available from a much less reputable source:

It makes logical sense to expect something like this in a dynamic PV loop because of the effects of resistance (more on that later),  but it is seen even in static compliance measurements.  Here, a diagram from Harris (2004) demonstrates the hysteresis in a static PV loop using the supersyringe method. The added labels demonstrate that, for the same change in pressure, the expiratory compliance is lower: 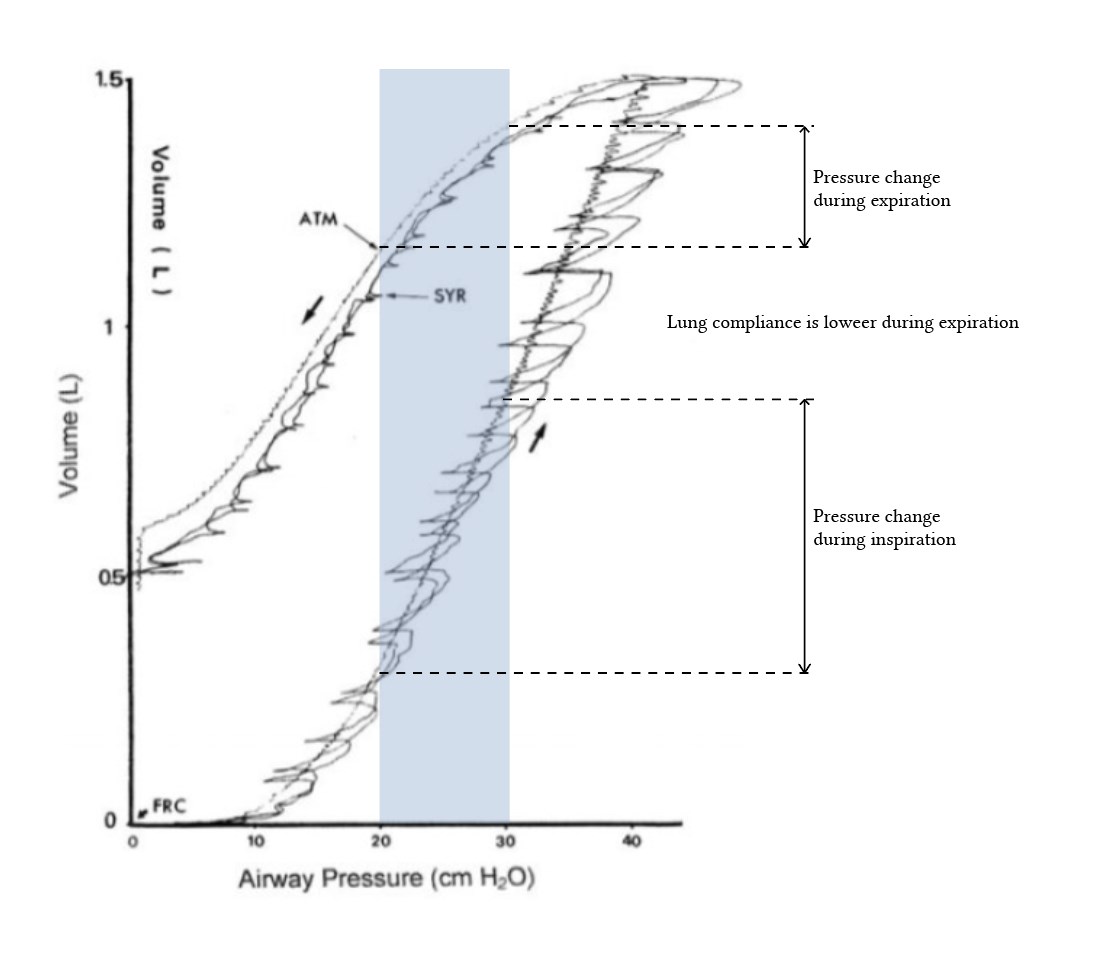 Why does this happen? There are four main reasons.

Dynamic compliance is change in volume divided by change in pressure, measured in the presence of gas flow.

In essence, it is the same compliance but measured during normal inspiration and expiration. Dynamic compliance is always lower than static compliance. The reason for this is that dynamic compliance also incorporates airflow resistance, in addition to the usual chest wall pressure and lung pressure.

Another major difference between static and dynamic compliance is the lack of an equilibration pause at the time of measurement. With the static compliance measurement methods, one usually measures a lung when it is completely still, after a few seconds have allowed units with longer time-constants to become completely filled. Measurement of dynamic compliance happens on the fly, and there is no time for air to distribute to those slower lung units. The consequence of this is a higher pressure measured for unit volume, i.e. a lower lung compliance. Moreover, the shorter the inspiratory and expiratory time, the more this effect will influence dynamic compliance.

So. Dynamic compliance decreases with increasing airflow and a faster respiratory cycle. Both of these are present in tachypnoeic patients. The term typically used to describe this is "frequency dependence".  Katsoulis et al (2016) demonstrated this beautifully in a group of asthmatic patients. Their graph (shamelessly stolen from the original paper) demonstrates the widening gap between static and dynamic compliance associated with increasing respiratory rate, particularly where there is small airways disease. 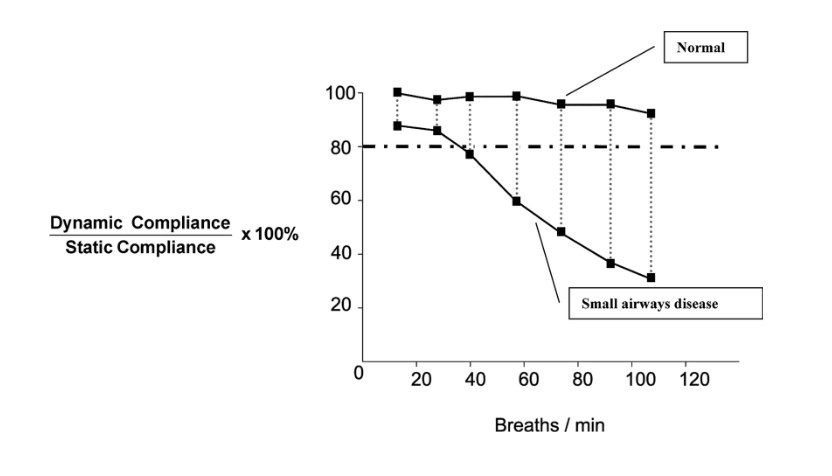 Apart from the abovementioned contribution of respiratory resistance to the total airway pressure here, dynamic compliance is also affected by the heterogeneity of time constants among lung units. A rapid inspiration will only have time to fill the "fast" alveoli, thereby generating pressure on the basis of the compliance of a relatively slow volume (the rest of the volume being "slow" alveoli). This will also add to the frequency dependence of dynamic compliance.

The need for the concept of specific compliance can be demonstrated by a simple thought experiment. Consider the pressure-volume relationship of a 20kg child. One might achieve vital capacity of perhaps 1L,  at 20 cm H2O. Compare it to an adult, whose lung volume at 20 cm H2O might be 4L.  Does this mean that the adult has higher lung compliance?

Of course, it does not. However, this demonstrates that the standard method of comparing lung compliance numbers tends to break down when one tries to compare compliance between patients who are comically mismatched in size. This is where specific compliance comes in. According to Harris (2005),

"Specific compliance is compliance that is normalized by a lung volume"

That normalising lung volume is usually the FRC. Thus, specific compliance can be expressed as:

Question 14 from 2016 and Question 1(p.2) from the second paper of 2008 asked about the factors which affect compliance. Particularly the question from 2008 was the one with the best model answer, which clearly stated what the examiners' expectations were. In summary, these factors are:

The effects of respiratory rate on dynamic compliance have been discussed already; the effects of surfactant are worth discussing separately.

The influence of alveolar surfactant on lung compliance

Most textbooks find a way to fit lung surfactant into the category of things which affect static compliance. Usually, a graph is trotted out which demonstrates the effect an absence of surfactant has on the compliance of the lung. The reference for this is usually a famous 1971 paper by T.E. Morgan, but in fact the original experimental data weres published in 1929 by Kurt von Neergaard. Unfortunately, the original article from Zeitschrift fur die gesamte experimentelle Medizin can no longer be obtained by any reasonable (cheap) means, but the graph is sufficiently famous that one can find a version of it everywhere.  In some cases,  for example the diagram below from Radford (1964), one can even find the original experimental cat's serial number. For some reason, everybody always picks the graph from Cat 27. 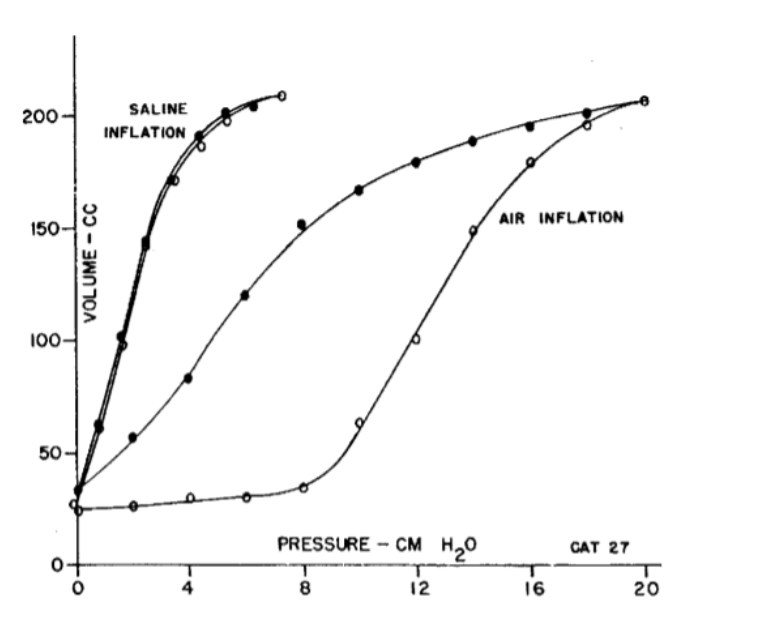 Cat 27's lungs were first inflated and deflated with air. Then, they were submerged in saline and inflated with saline. The effect was substantial. In the saline-filled lung, the effect of the surfactant on the surface tension of the alveoli was obliterated, and only the elasticity of the lung itself was measured. The drowned lung was much more compliant than the air-filled lung.

However, this seems like an irrelevant diagram at this point. All it describes is that the presence of surface tension decreases lung compliance, and that without it the compliance of the lung tissue itself is excellent. It is well known that surfactant increases lung compliance, because water on its own has a surface tension so high that the alveoli would collapse en masse and lung compliance would be extremely poor. Surely, it would be better to illustrate this concept? A suitable diagram for this purpose comes from a paper by Lachmann et al (1980). The authors lavaged all the surfactant out of the lungs of rabbits, and thereby created conditions resembling ARDS (see their stolen graphs below). 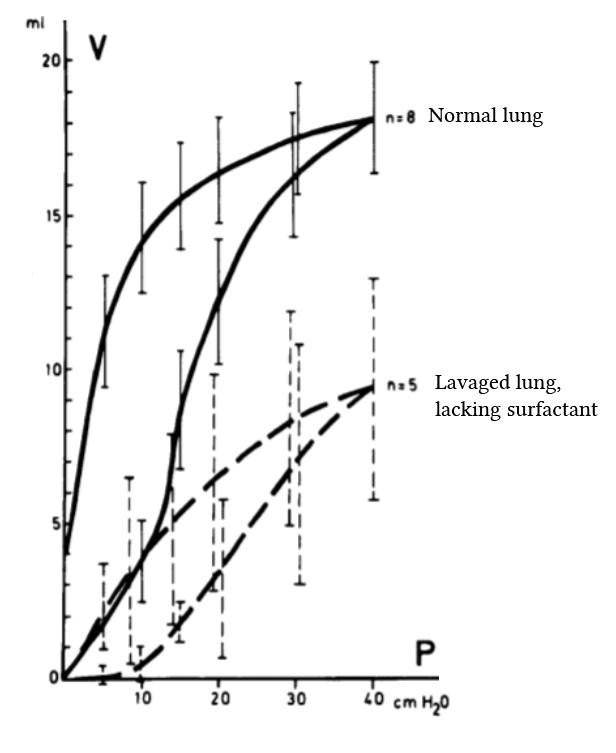 Lachmann, B., B. Robertson, and J. Vogel. "In vivo lung lavage as an experimental model of the respiratory distress syndrome." Acta anaesthesiologica Scandinavica 24.3 (1980): 231-236.