This chapter is most relevant to Section F3(iii) from the 2017 CICM Primary Syllabus, which expects the exam candidates to "explain the concepts of time constants". This has never appeared in the CICM fellowship exam, but ANZCA candidates have had to deal with it, and given the considerable pendelluft betwen the two colleges, CICM trainees can safely expect an SAQ on this topic at some stage in the future. To extend the metaphor further, CICM appears to be the slow alveolus here (the SAQs only seem to be exchanged in one direction).

In the presence of constant flow,

This has implications for dynamic compliance:

Nunn's has a section on this (p.111 of the 8th edition) which is sufficiently brief that one could read it and not feel as if one's precious pre-exam cram time was being wasted. There are other more detailed resources which could not be characterised in this way. Of these, the best is probably Shevade (2019).   Otis et al (1956) is probably worth listing among these papers, as it is probably the earliest reference to a "time constant" for the respiratory system, and because it patiently explains the maths over many pages.

The intensive care community or physiology in general does not own the concept of time constants, as it is something we have borrowed from the world of mathematics, via engineering. At its most basic level, one can define a time constant as follows:

A detailed demonstration of a time constant is probably required for this to be perfectly clear.

Behold, a function. Watch as it decays: 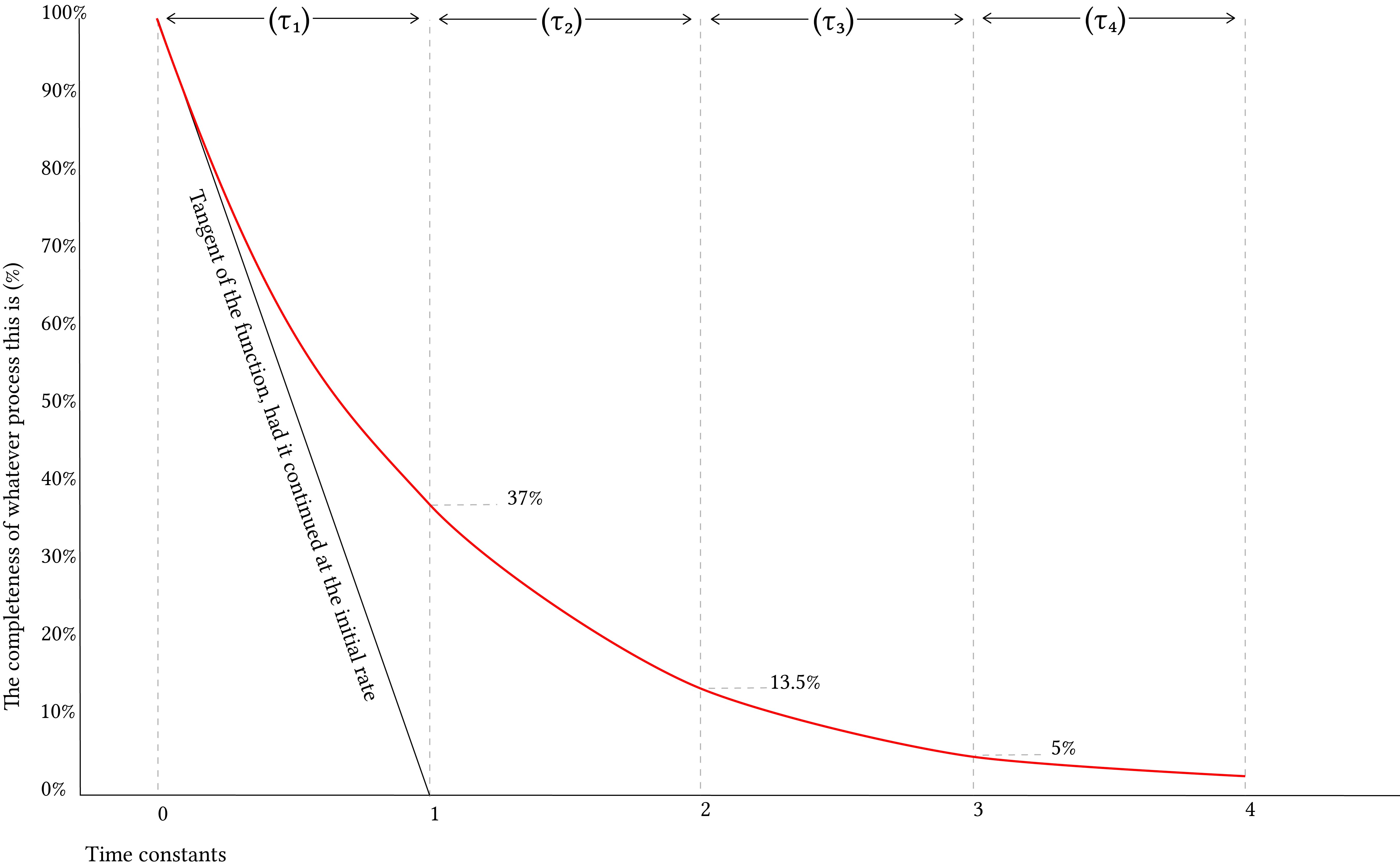 If, instead of curving exponentially and slowing its rate of decay, the function continued to decay at the same rate as it had at Time Zero, it would obviously reach the bottom rather quickly. The time it would take to reach the bottom is one time constant. Because this happens to be an exponential curve (using the base of natural logarithms, e), after one time constant the function has decreased to 37% of its initial value (i.e. it has decreased by 63%).  Thus, one might say that the time constant is

"A time which represents the speed with which a particular system can respond to change, typically equal to the time taken for a specified parameter to vary by a factor of 1− 1/ e "

But that would probably be pointless in the context of a CICM exam paper. The examiners would probably have something completely different in mind, because for them "knowledge of mathematics has been attenuated under the relentless pressure of new information acquired while studying the
biological sciences"
(Nunn's, 8th ed., Appendix E).  Their lung-centric definition would probably read something like

Time constant (τ) is the time required for inflation up to 63% of the final volume, or deflation by 63%

For normal lungs, the value for an expiratory time constant is usually given as approximately 100-200 millseconds, i.e over 0.6 seconds 95% of the total lung volume should be emptied. Obviously in states of extreme ICU-level illness, thing may be a little different; especially where airway resistance is increased. For example, Karagiannidis et al (2018) demonstrated time constants around 2500 milliseconds in patients intubated for severe COPD.  Interestingly, in ARDS patients, Guttman et al (1995) found expiratory time constants in the range of 600-700 milliseconds, but these were mainly due to the mechanical properties of the endotracheal tube (and the lung itself was not to blame), which supports the concept of a normal but small "baby lung" in ARDS.

Additionally, something that might come as a surprise but which makes sense mathematically, is:

This makes sense. Compliance = ΔV / ΔP and resistance = ΔP / flow, which is ΔV / T. When the inspiratory flow is constant, time constant is the product of resistance and compliance.

But what does this mean?

In general, wherever the physiological significance of the time constant is brought up, the textbook chapter resorts to the use of a diagram which simplifies the respiratory system by representing it as two alveoli. Each alveolus, we are told, has some independent resistance and compliance characteristics. The behaviour of these separate units is then modelled. For instance, when both have identical characteristics, both will fill simultaneously on inspiration, whereas a delay in filling or incomplete filling should be expected wherever there is some difference in resistance and compliance between lung units. In terms of representative diagrams, the best one is probably found in Nunn's, good enough to be graphically paraphrased below: 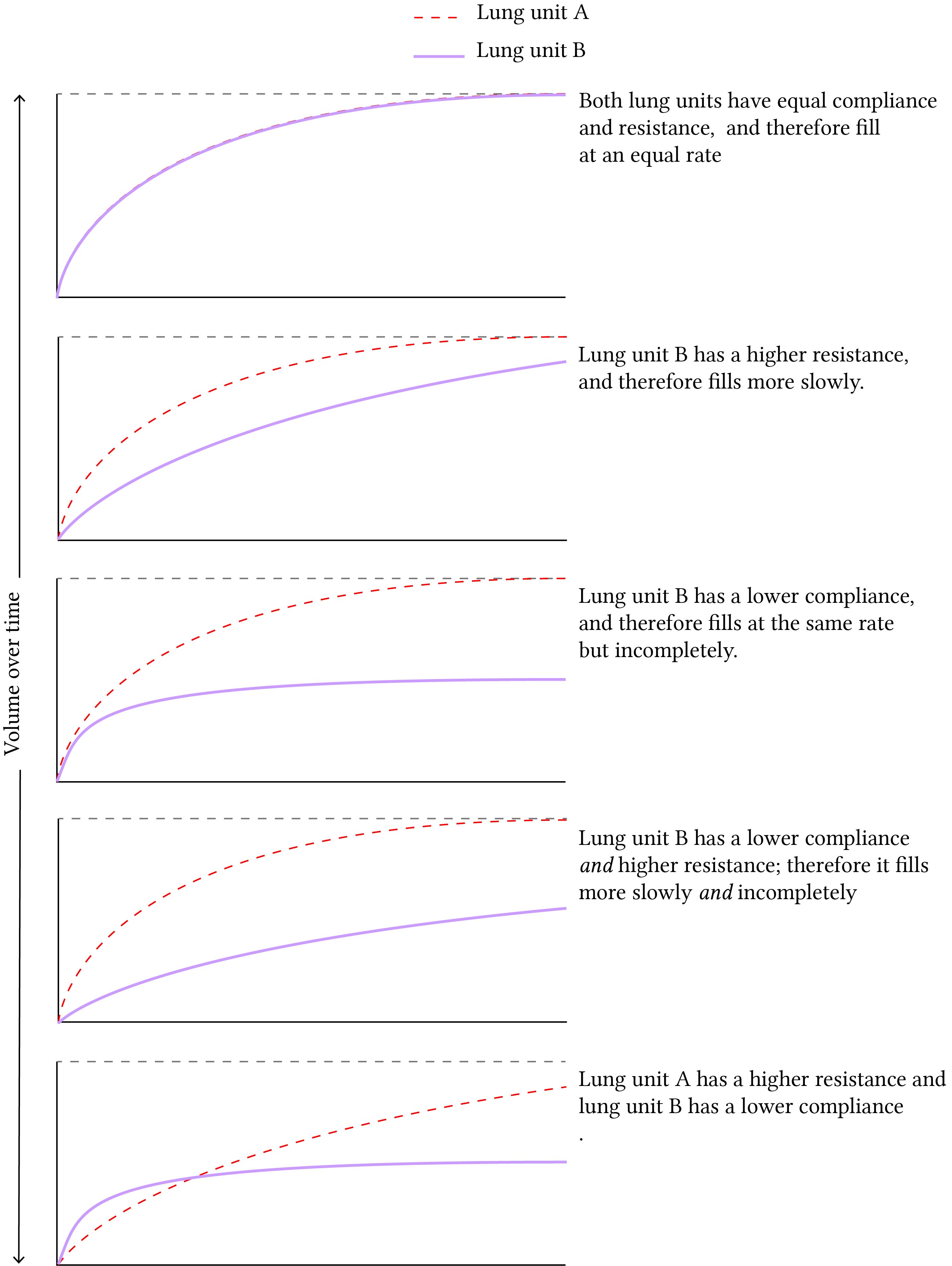 Basically, the implication of all these diagrams are that lung units with different time constants will fill at different rates and potentially also up to different final volumes. Then, when the inspiratory flow stops, the lung units with longer time constants (usually described as "slow alveoli") will continue to fill with "borrowed" gas which redistributes from faster alveoli. This exchange of gas is usually given the term pendelluft, which seems to be the go-to German word to describe any gas movement between different lung units.

Practically, this can be demonstrated by performing an inspiratory hold manoeuvre on a mechanical ventilator. When one's mechanical breath has been delivered and the flow stops, the airway pressure first falls abruptly because resistance no longer contributes to it. That part is irrelevant. Then, as one holds the pause for longer, one may be able to see a gradual downward drift of the plateau pressure, as gas is exchanged between lung units with different time constants. This pendellufting of the tidal volume is one of the reasons the recommended duration of an inspiratory hold is about 2 seconds (the other reason for this phenomenon is the relaxation of the lung and chest wall tissues, which contributes to the total airway resistance and is discussed elsewhere). 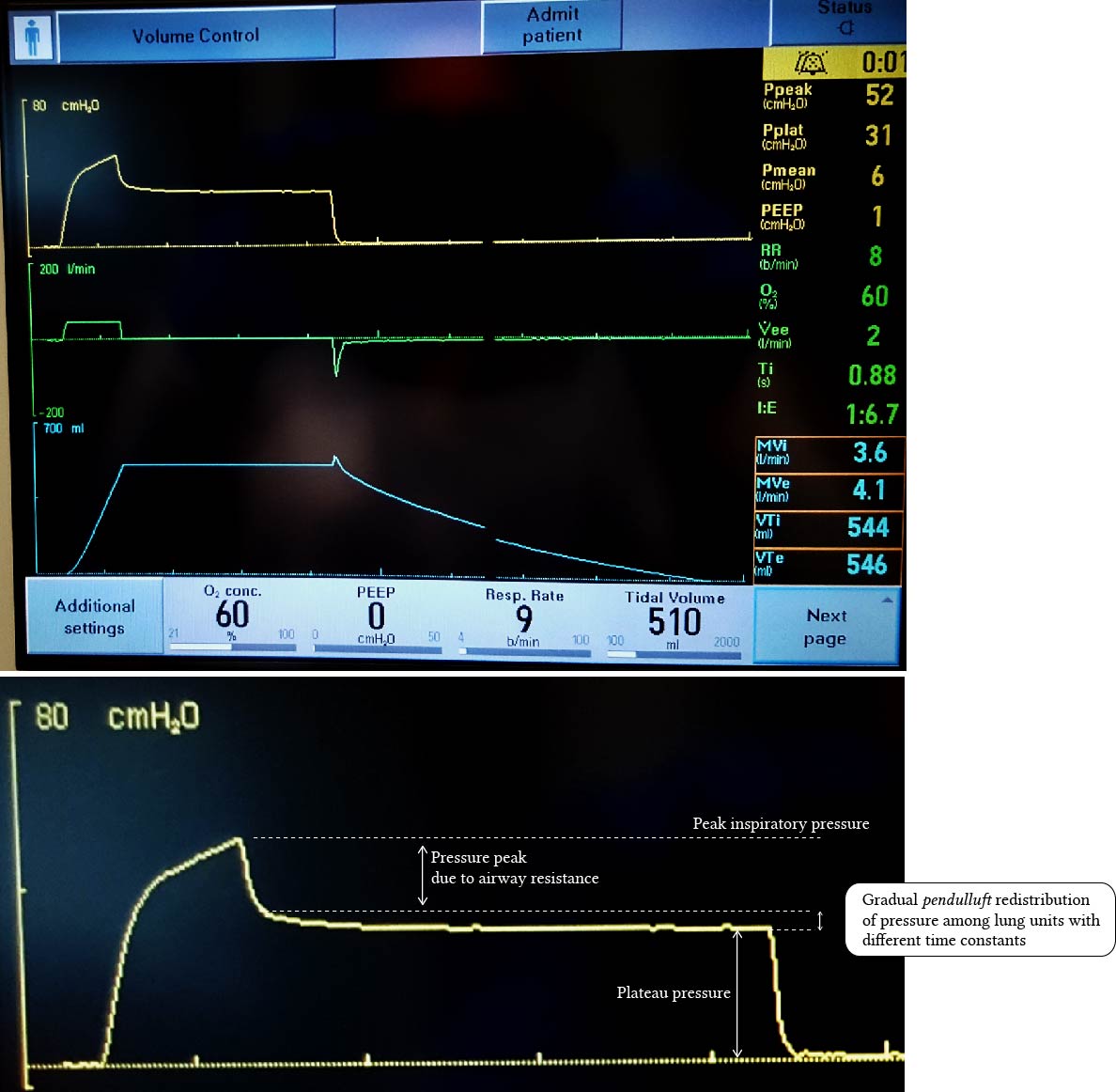 One would immediately guess from the ventilator settings and waveforms that the graphic in this illustration was generated in a patient with rather severe bronchospasm. But how much pendelluft is there in a normal respiratory system? Probably very little. Otis et al (1956) measured time constants from each of the main bronchi belonging to a Dr. Bruce Armstrong, according to the footnote. As one can see from their data (below), "flows in the two bronchi were roughly equal and exactly in phase with each other". Only when some added resistance was introduced was there a change in the flow timing, seen in the diagram on the right. 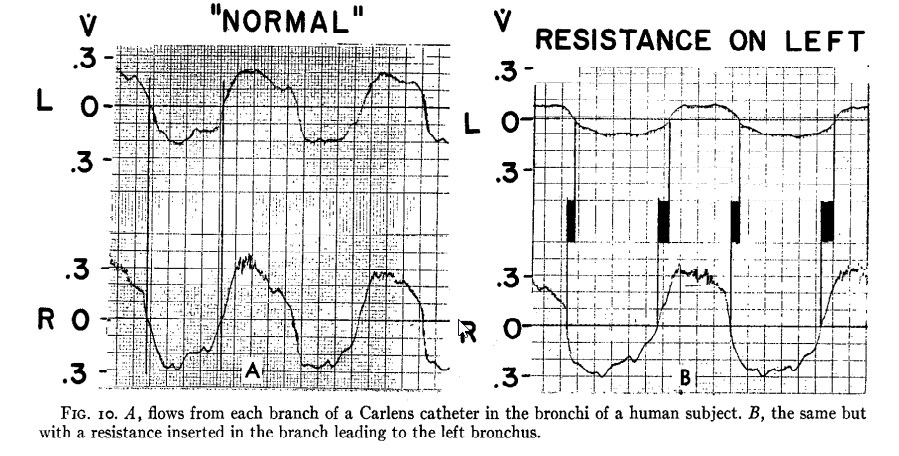 Something very similar was the result of some experiments by Bates et al (1988), although these investigators used mongrel dogs instead of healthy colleagues. Alveolar pressure was measured, rather than bronchial pressure, making this somewhat more convincing. There was minimal difference in expiratory flow rates between different lung units in these animals, prompting the authors to remark that "the lungs of these animals ...behaved as if they contained a single large and uniform alveolus, with no regional differences in time constants of emptying".

In summary, in the presence of constant flow,

This also explains the frequency dependence of dynamic compliance. Obviously, if the inspiration is very rapid, at the end of it the only units which are completely filled are going to be the units with the shorter time constant, which are going to be a) probably the poorly compliant units, and b) few in number and of a lower total volume. The shorter the inspiration, the fewer the recruited units, and the lower the proportion of the total tidal volume which is distributed to the slower alveoli. Thus, dynamic compliance will be lower the faster the inspiratory time, i.e. with higher respiratory rates.

Kallet, Richard H., Michael S. Lipnick, and Gregory D. Burns. "The Nature of Recruitment and De-Recruitment and Its Implications for Management of ARDS." Respiratory Care 66.3 (2021): 510-530.