This chapter is most relevant to Section F3(viii) from the 2017 CICM Primary Syllabus, which expects the exam candidates to "explain the relationship between resistance and respiratory gas flow". This topic has appeared multiple times in the Part One written papers, always as some variation on the theme of "which factors affect airway resistance".

Specifically, airway resistance is always asked for, with the implication that no marks would be awarded to any discussion of factors such as tissue resistance and respiratory inertance. In that spirit, this chapter mainly focuses on physiological and pathological factors which affect airway resistance.

Other factors which affect respiratory resistance as a whole:

In terms of published material, Nunn's usually has a section in every edition which is typically titled "Factors affecting respiratory resistance" (p. 37 of the 8th ed). Beyond this resource, and other textbook chapters of its kind, there is nothing collected in a bundle - it appears that one must scour the physiology literature of the 1960s to find satisfactory references for this topic. A reader is left with the distinct desire to publish their own review.

As the lung expands, the airways also expand, as the elastic tissue of the parenchyma stretches them open. Resistance decreases on a hyperbolic curve, as airway diameter is an important factor in the resistance to both turbulent and laminar flow. Moreover, bronchi are stretched by lung expansion, and this increase in length promotes the development of laminar flow (the so-called "entrance length").

Any viva-like discussion of this seems to lead to the need to sketch a graph, which classically takes this shape: 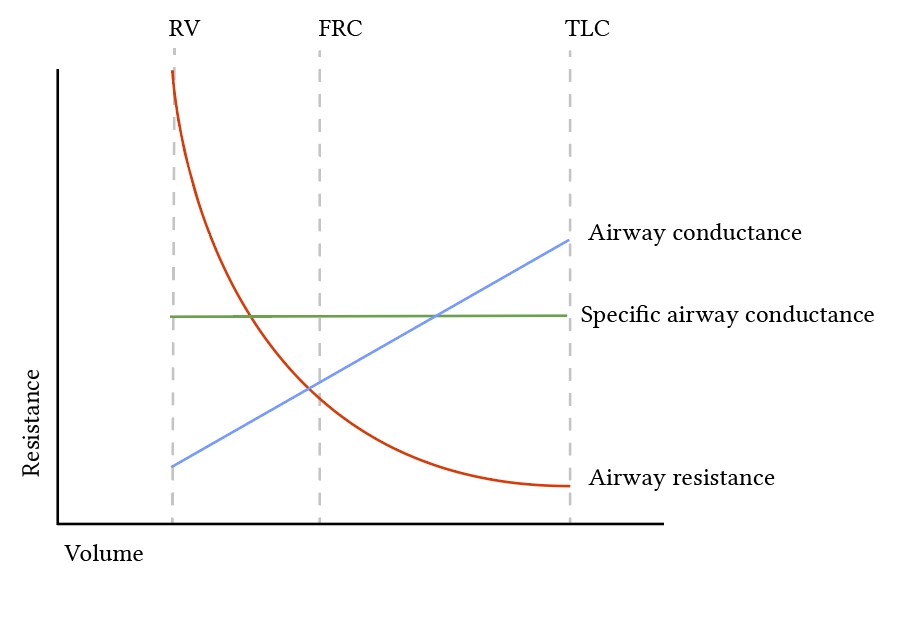 It is probably not essential to reproduce the precise dimensions of this diagram; or at least that seems to be the attitude of most publishers. Truly, its value is in the shape of the lines rather than accuracy of contained data. The most important matters to communicate are that airway resistance decreases exponentially, and airway conductance increases linearly.  Obviously, specific airway conductance is always going to be a flat straight line on these graphs, as it is conductance divided by thoracic gas volume.

The earliest examples of this graphical representation probably come from such classical papers as Briscoe & Dubois (1958). The investigators  selected a series of normal subjects ("laboratory workers, or the relations of laboratory workers, except for a circus dwarf") and subjected them to body plethysmography, plotting their airway resistance and conductance along an x-axis with lung volume:

This relationship obviously breaks down in certain pathological scenarios. For example, Nakagawa et al (2015) were able to demonstrate that among COPD patients with tachypnoea, the effect of increasing lung volume (by dynamic hyperinflation) actually led to increased airway resistance.  There was no anchoring of the airways to expanded lung tissue (because the connective tissue of the lungs had been destroyed by emphysema), and there was compression of the smaller airways by the surrounding hyperinflated lung parenchyma (where gas trapping had occurred).

So as not to recapitulate the contents of the respiratory resistance chapter, it will suffice to say that:

The effects of increasing flow rate on airway resistance at different points in the airway was computed by Pedley et al (1970). If one wanted to, one could also plot the (almost linear) relationship of flow and resistance next to the authors' original data.

In some dark timeline it may become necessary to extend this even further for an SAQ answer, for example if one were asked for some examples of the specific scenarios in which flow may be a serious influence on airway resistance. These would probably fall into three groups:

These are obviously numerous. Nunn's goes into overmuch detail regarding the sympathetic control of the airway smooth muscle, which has importance for bronchodilator therapy. There are of course numerous other factors. In answering a question like "which factors affect airway diameter", the trainee's bigger problem will not be coming up with factors but classifying them in a way which appears measured and thoughtful.

"The differences in infants earned extra marks", remarked the examiners in their comment Question 6(p.2) from the first paper of 2009. Which differences did they mean?  Well. Basically, it's higher. Airway resistance decreases markedly with growth from infancy to adulthood. Marciniak (2019) lists a resistance of 19 to 28 cm H2O/L per second in neonates, whereas the figure is closer to 2 cm H2O/L per second in adults.

Briscoe, William A., and Arthur B. Dubois. "The relationship between airway resistance, airway conductance and lung volume in subjects of different age and body size." The Journal of clinical investigation 37.9 (1958): 1279-1285.

Bruno Marciniak, in A Practice of Anesthesia for Infants and Children (Sixth Edition), 2019