This chapter is most relevant to Section F3(viii) from the 2017 CICM Primary Syllabus, which expects the exam candidates to "explain the relationship between resistance and respiratory gas flow". This topic has appeared multiple times in the Part One written papers, generally as a variation on the theme of "which factors affect airway resistance". However, that one time (Question 23 from the second paper of 2013) the examiners asked about how respiratory resistance be measured, for 20% of the total mark.

The best free resource (or paid, for that matter) is the free paper by Urbankowski & Przybyłowski (2016).  David Kaminsky's 2012 article on resistance is also free, and approximately 50% of it is taken up by a discussion of measurement. Nunn's has some information on this scattered across its pages, but it is not of the same quality, and you have to pay for it.

Simultaneous measurement of pressure and flow

Given that the definition of resistance required pressure and flow (R = ΔP/V̇), one could expect that by measuring those parameters directly one might be able to calculate resistance. This would usually require the measurement of alveolar pressure, which is invasive and impractical (you are destroying the organ which you are measuring by the act of measurement). Pleural pressure is a reasonable surrogate for alveolar pressure, and oesophageal balloon pressure is a reasonable surrogate for pleural pressure, which makes this method slightly less invasive. By measuring pressure at the airway and at the alveolus simultaenously with measuing flow, one is able to calculate resistance at any stage in the respiratory cycle.

This is probably the oldest method, developed in the 1950s by DuBois et al (1955). The excellent artwork below is a slightly modified version of the image from a later paper by Briscoe & Dubois (1958), where the respiratory resistance was measured in a group of patients whose body sizes differed significantly. The device itself was originally developed by E. Pflüger in 1882 to measure lung volumes and was originally called "Das Pneumonometer". 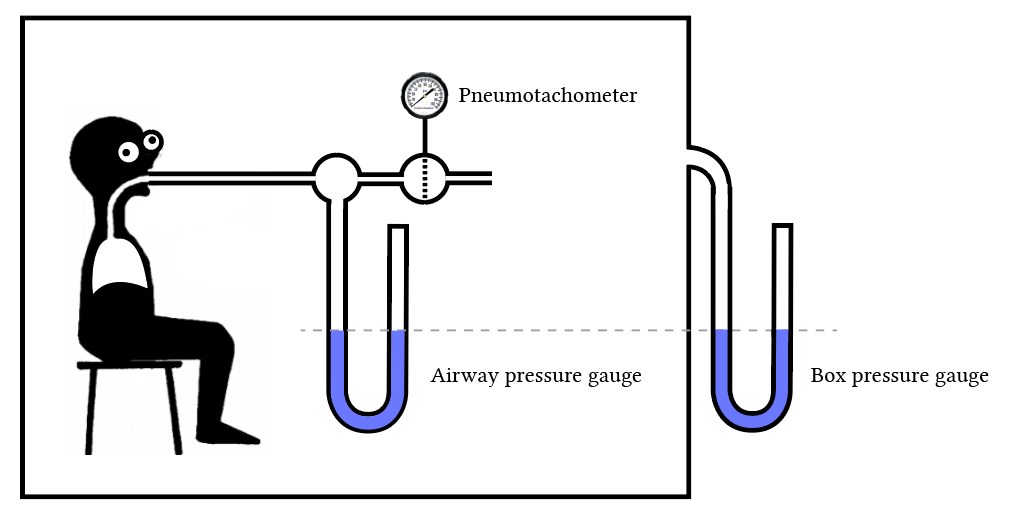 The device is usually a large box, approximately the size of a telephone booth. For for those of us not old enough to remember what those were, it is a rectangular chamber designed for privacy and vandalism, approximately 600-1000L in volume or enough to fit fourteen Scottish actors. The important part is that the volume is known. It is usually made with glass or perspex walls, so the operator can intervene if their subject loses consciousness or goes insane. The basic theory of its function is as follows: 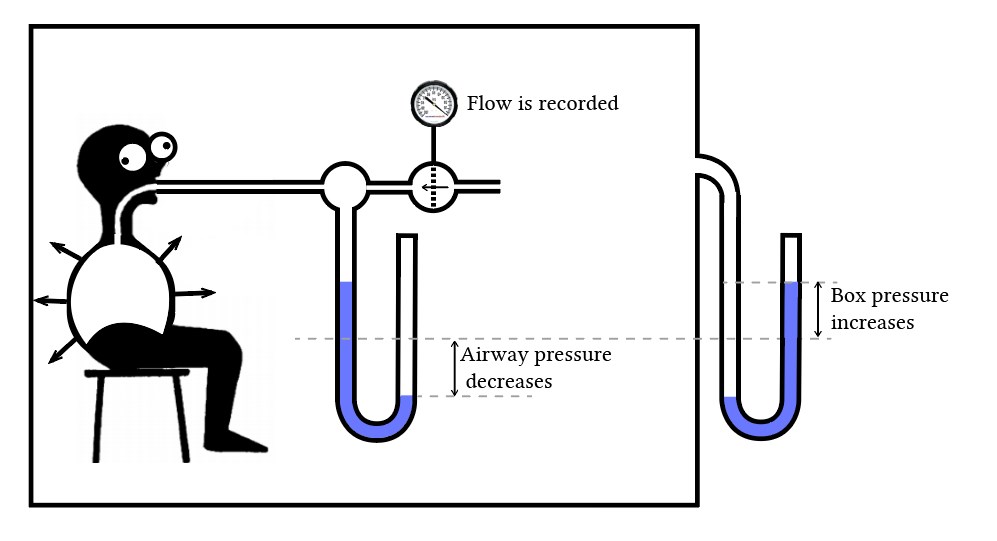 DuBois et al (1956) had also described this measurement technique, and unlike body plethysmography, it does not lend itself to being explained by a diagram with derpy eyeballs. The basic premise is as follows:

This method has the advantage of requiring minimal cooperation from the patient, and is therefore particularly suitable for use in small children and delirious adults.

Beydon (2006) describes this very well. This technique is based on the assumption that, when you transiently interrupt the respiratory gas flow by blocking the airway, the airway pressure and the alveolar pressure are equal. The occlusions are very brief, in the order of 100 milliseconds, and the devices designed for this purpose are generally automated, performing one of these occlusions in every breath. The airway pressure measured during the occlusion is opposed against atmospheric pressure to produce the ΔP, and the flow recorded just before the occlusion is the V̇  in ΔP/V̇. 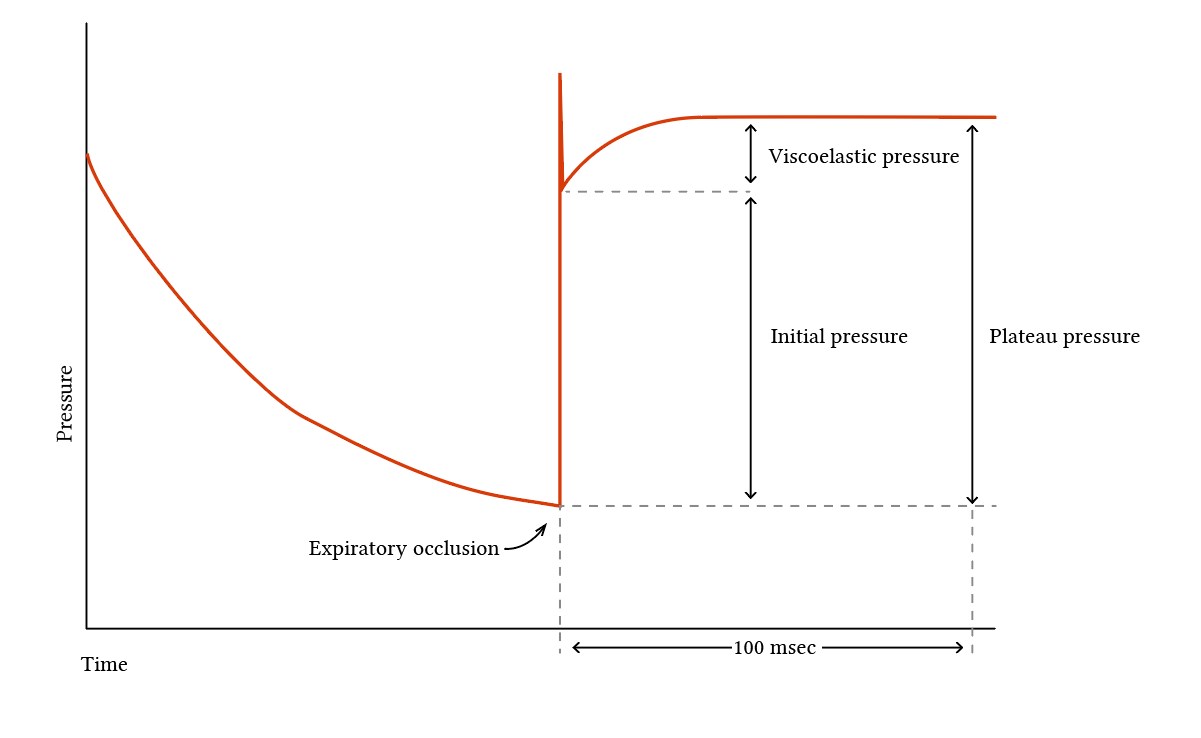 The transient occlusion gives three pressures, of which the earliest measurement (the initial pressure measured immediately following the occlusion) is the one most closely related to airway resistance. In fact in order to get the pressure closes to the occlusion (which can be obscured by post-occlusion pressure oscillations) the pressure trace is usually back-extrapolated from later pressures, to get a value for something like 15 milliseconds post occlusion.

When a mechanical ventilator delivers a breath, the pressure generated by a constant flow of gas into the patient is a combination of lung compliance and airway resistance. By ending the inspiration and holding the breath, one can eliminate the contribution of resistance. Observe:

The early drop in respiratory pressure is said to be wholely due to the airway resistance. A slower more gradual decline is later seen, which represents some combination of tissue relaxation and gas equilibration between lung units with different time constants. The most accurate means of measuring this is in an anaesthetised patient who is paralysed by muscle relaxant

The nose is not usually featured among the structures which an intensivist might want or need to measure the pressure of, and one does not usually see the rhinomanometer wielded in anger in an ICU. However, in the right circles, it is clearly as common as a stethoscope, and its use is sufficiently widespread that the Standardisation Committee on Objective Assessment of the Nasal Airway had to publish a consensus report on it in Rhinology (Clement et al, 2006). The principle of its use is:

"The main disadvantage of active posterior rhinomanometry is pharyngeal reflex which is induced by measuring instruments", Urbankowski & Przybylowski complain, which is unsurprising considering how deep the probes are inserted. It is remarkable that any measurement at all is possible with the patient gagging and vomiting all over the place. However, it appears that the results derived from this technique correlate reasonably well with the results of body plethysmography and forced oscillation.

DuBOIS, ARTHUR B., Stella Y. Botelho, and Julius H. Comroe. "A new method for measuring airway resistance in man using a body plethysmograph: values in normal subjects and in patients with respiratory disease." The Journal of clinical investigation 35.3 (1956): 327-335.

Briscoe, William A., and Arthur B. Dubois. "The relationship between airway resistance, airway conductance and lung volume in subjects of different age and body size." The Journal of clinical investigation 37.9 (1958): 1279-1285.