This chapter is most relevant to Section F3(viii) from the 2017 CICM Primary Syllabus, which expects the exam candidates to "Explain the significance of the vertical gradient of pleural pressure and the effect of positioning". Surprisingly, this topic has never appeared in the written exam. That is clearly a matter of time. One can conceive of any number of questions on this topic, and it lends itself well to answers involving the drawing and labeling of diagrams.

An excellent resource for this would be Emilio Agostini's article, Mechanics of the Pleural Space (1972), or (remarkably) the 2011 version published as a chapter for Comprehensive Physiology.  Puzzlingly, the American Physiological Society paywalled both of these articles, but somehow allowed a solid alternative to remain freely available (Lai-Fook, 2004).

Under normal physiological conditions, the content of the pleural cavity is probably somewhere between 2ml and 20ml, according to Yamada who in 1933 sampled the flüssigkeit from the Pleurahöhlen of several relatively healthy Japanese soldiers. That stuff is an ultrafiltrate from parietal pleural capillaries, and nothing further will be said regarding its composition here. In short, its a fairly small space, which contains a small amount of fluid, and it is under constant negative pressure, which sucks the lungs up against the walls of the chest.

This negative pressure is thought to be generated by the lymphatic drainage of fluid from the pleural space (Negrini & Fabbro, 1999), which occurs because of the gentle peristaltic suction of lymphatic vessel walls. Additionally, as is discussed in the chapter on lung compliance, the chest wall is under tension and wants to expand (when the chest is opened and negative pressure is released, the ribcage tends to spring out to a volume which is well above the FRC, probably around 70% of the total lung capacity). Lastly, the lung wants to collapse to some smaller volume than the FRC, putting further negative pressure on the pleural space.

How much negative pressure is there in the pleural cavity? That's very difficult to answer with a straight face. All that can be safely said is that it is largely subatmospheric. The exact numbers seem to vary from person to person and from experiment to experiment. When pressed, most textbooks will give a number like 5cm H2O without really saying where it came from. There being no logical way to bring order to this chaos, one can only resort to showing the reader an example of some of this heterogeneous data. Here's a couple of pleural pressure tracings misappropriated from Mead & Ganesler (1959), cut and remixed to match the grids on this ancient newspaper-quality photocopy:

The authors described where their catheters were inserted (some in the 2nd, some in the 5th and 6th, some in the 8th intercostal space) but did not mention which of those punctures were the origin of the tracings. That would have been important because there is a difference in pressure between the top and the bottom of the cavity, as will be discussed next.

There is a difference between the pressure of the pleural space at the apex and at the base of the cavity. To illustrate the magnitude of this difference, physiology textbooks tend to give an authoritative-sounding range of pressures such as this one:

Or, they give completely different numbers. It is hard to find human data in support of this specific list of pressures, but D'Angelo et al (1970) reported some animal data which is vaguely similar. The investigators measured pleural pressure at different vertical points along the pleural cavity of dogs and rabbits. The stolen diagram below is minimally modified from their original publication (the main change was to put two of the graphics side by side).

If the slope of both of these lines looks similar, that is because it is. In the head-up position, both the rabbits and dogs had a pleural pressure which changed by about 0.45 cmH2O per every 10mm of lung height. Human lungs are approximately 200 mm in height (Kramer et al, 2012), and assuming some similarity with other mammals they should therefore have a pressure difference of around 9cm H2O from top to bottom, which sounds plausibly like the often-quoted textbook figures.

This does not appear to be particularly consistent with empirical measurements. For example, when Daly & Bondurant (1963) measured upright (seated) pleural pressure in normal male volunteers, they got a mean pressure of around -3 cm H2O at the third intercostal space and +2cm H2O at the 8th intercostal space, which doesn't exactly fit with the D'Angelo data. It does not help that everyone performs their measurement in a slightly different way, which eliminates some errors but inevitably introduces others. There are a whole plethora of such experiments, and they all give slightly different data, which means the usually quoted figures in the textbooks are no more wrong than anybody else. In short, from a pragmatic perspective it is probably more important for the CICM primary exam candidate to know about this pressure gradient and understand its significance, rather than to know the precise values.

The significance of the vertical pleural pressure gradient 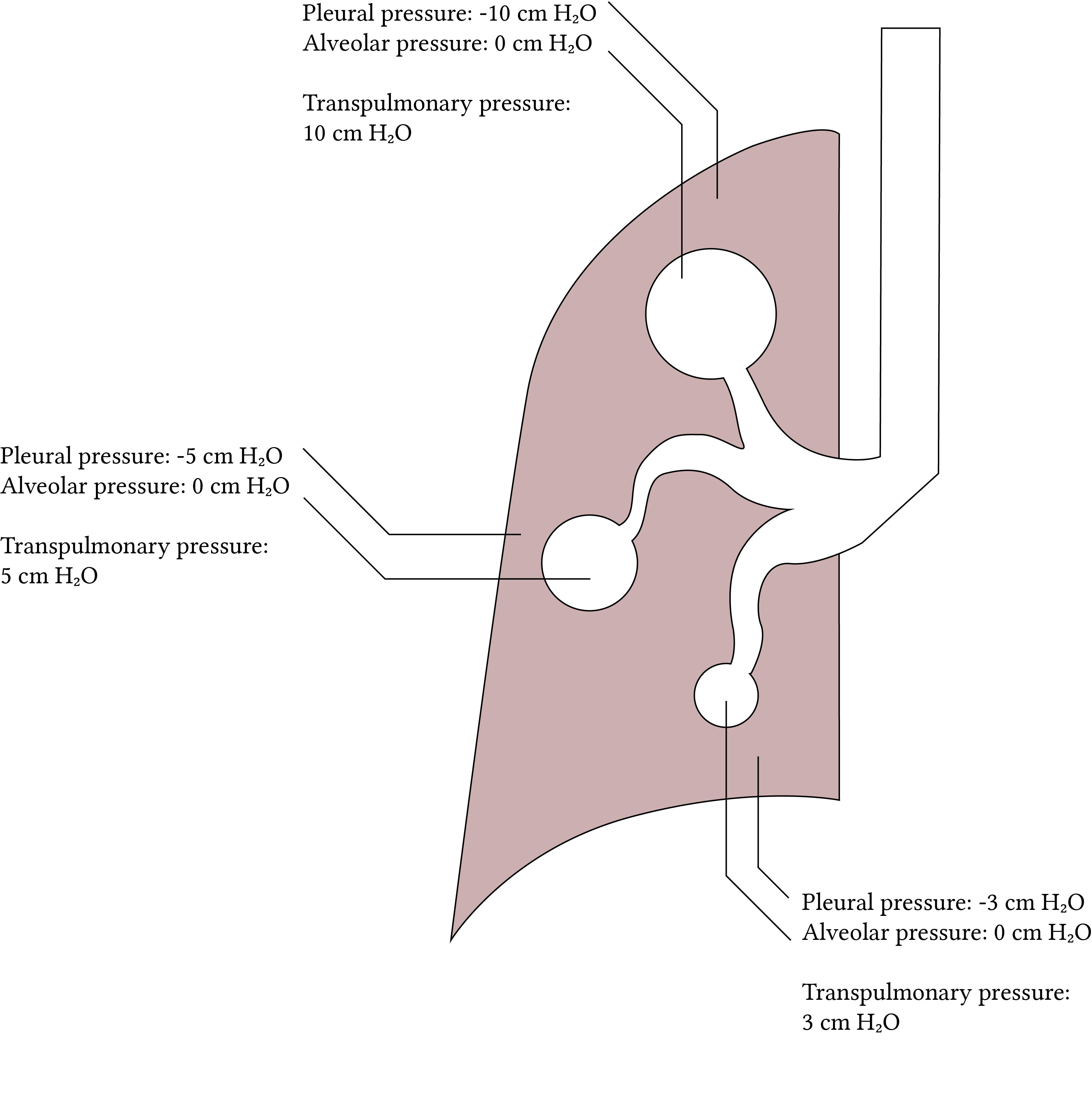 This has meaning. Let's say the whole lung is being ventilated for ARDS, generating a plateau pressure of 25 cm H2O. The bases of the lung will end up having a transpulmonary pressure of 28 cm H2O, which remains vaguely lung protective. The apices, however, will have a pressure of 35 cm H2O, which most people would consider dangerously high. Sure, this analogy is idiotic because most of us do not ventilate our ARDS patients in a bolt-upright sitting position, but it illustrates the point. At the end of expiration, apical alveoli are already well-inflated and their compliance will be limited; there's only so much more volume you can get from putting them under a more negative pressure. The bases of the lungs will however be relatively deflated, their compliance will be good, and that is where most of the tidal volume will go.

The origin of the vertical pleural pressure gradient

How does this gradient come to be? Given the vertical alignment of it, one would be tempted to say "gravity" but this is actually not completely true. If the weight of the lung was doing all the work, the pressure difference between the top and the bottom of the cavity would be laughably small, because the lung is not a particularly heavy object. Even the larger right lung in a male on average weighs only 445g including the blood. West & Matthews (1972) ran some models on whatever passed for a supercomputer in those days (it only took 8 minutes to render) and were able to determine that this weight could only account for about half of the pressure gradient which is observed experimentally. Clearly, other factors must be in play. Of these, the most important are probably the weight of the mediastinal contents and the pressure from abdominal contents. Agostini et al (1970) confirmed that by eviscerating a bunch of small animals and demonstrating that the vertical gradient of transpulmonary pressure decreased by 2–3 times as a result, irrespective of their posture.

Again borrowing the dog data from D'Angelo et al (1970) and rearranging his images to all fit together, one can produce this big colourful bowl of graph spaghetti: 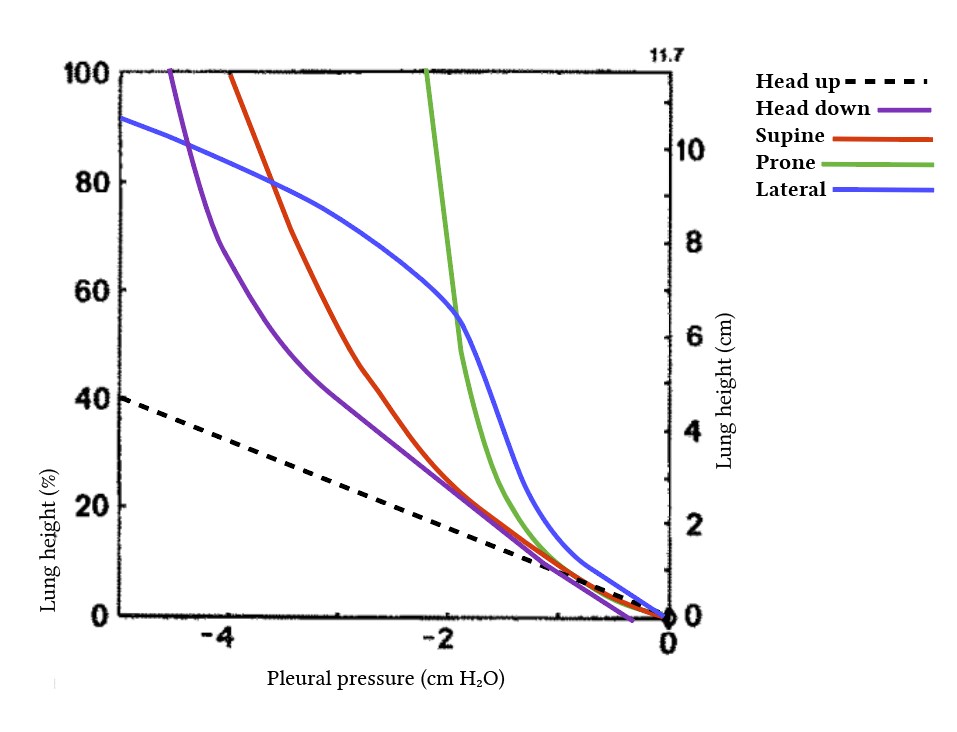 The upshot of all this is that: