Work of breathing and its components

This chapter is most relevant to Section F3(ii) from the 2017 CICM Primary Syllabus, which expects the exam candidates to be able to "describe the work of breathing and its components". This has not appeared in the written papers for the first ten or so years of the CICM Primary exams, but the importance of this topic is such that we could all be fairly confident that one day it would make an SAQ or viva, and eventually it appeared in Question 2 from the first paper of 2021. The pass rate was 24%, suggesting that some people were surprised.

Of the peer-reviewed resources for this topic, Cabello & Mancebo (2006) is probably the best brief overview, and is available for free from ResearchGate. One may be able to rote-learn this topic on the basis of what they have published, and pass an SAQ in the primary exam. Banner et al (1994) is also good, in fact better, but unfortunately not free. One would walk away from this article with a detailed understanding of this topic. Additionally, an ancient paper by R.M. Peters (1969) is also freely available, and is probably still relevant, insofar as the scientific community have not recently changed their definitions of "work" or "breathing".

Definitions of work and power of breathing

Work is the product of force and displacement, measured in joules, where 1J is the expenditure of one joule through a displacement of one metre. The equation for work at its most basic is:

But, in the squishy biological world of respiratory physiology we are unaccustomed to describing respiratory function in terms of force or distance. Fortunately, we can easily convert these parameters into pressure and volume. The best derivation for this can be found in Part One, one which requires minimal changes:

In a normal person, at rest the work of breathing is about 0.35 J/L, and the power of breathing is about 2.4 J/min. These figures come from some work by Mancebo et al (1995), who hooked some healthy volunteers up to some flow and pressure measurement equipment and then measured the pressure and volume they generated during normal calm breathing. According to some ancient data from Liljestrand (1913) and some modern reviews by Zakynthinos & Roussos (1991),  this sort of calm quiet breathing has an oxygen cost of around 0.25-.5 ml O2 per 1000ml of ventilation, or something like 1-2% of the total basal metabolic oxygen consumption. This suggests that the efficiency of normal tidal breathing is quite high. This is thought to be because much of the energy used for normal tidal respiration is work done against elastic elements of the respiratory system, i.e that kinetic energy is stored in stretching tissues on inspiration, and is returned on expiration.

The Campbell diagram of the work of breathing

This diagram is confusingly only one of the Campbell diagrams, the other being a diagram which describes rotor dynamics. The Cambell diagram referred to in regards to respiratory physiology was developed by Edward J. M Campbell, who published a book in 1958 in which he described this relationship. That book is of course out of print and there does not appear to be any legal or illegal way of acquiring it within the budget of a hobbyist blogger, which is just as well because judging by the reviews it was exceedingly difficult to read. The best explanation for this diagram actually comes from  Banner et al (1994). To understand it, one needs to unpack the various components of the work of breathing, and then to combine them into one relationship. Judging from the text, this group of graphs is offered as a schematic representation of real pressure and volume relationships, and though it might contain realistic-looking numbers it is not based on any specific experimental data.

Given that work is pressure multiplied by volume, one should be able to present it as the area on a plot of pressure vs. volume. Such a plot can be defined for the work required to inflate the elastic lung tissues from FRC up to some hypothetical normal tidal volume : 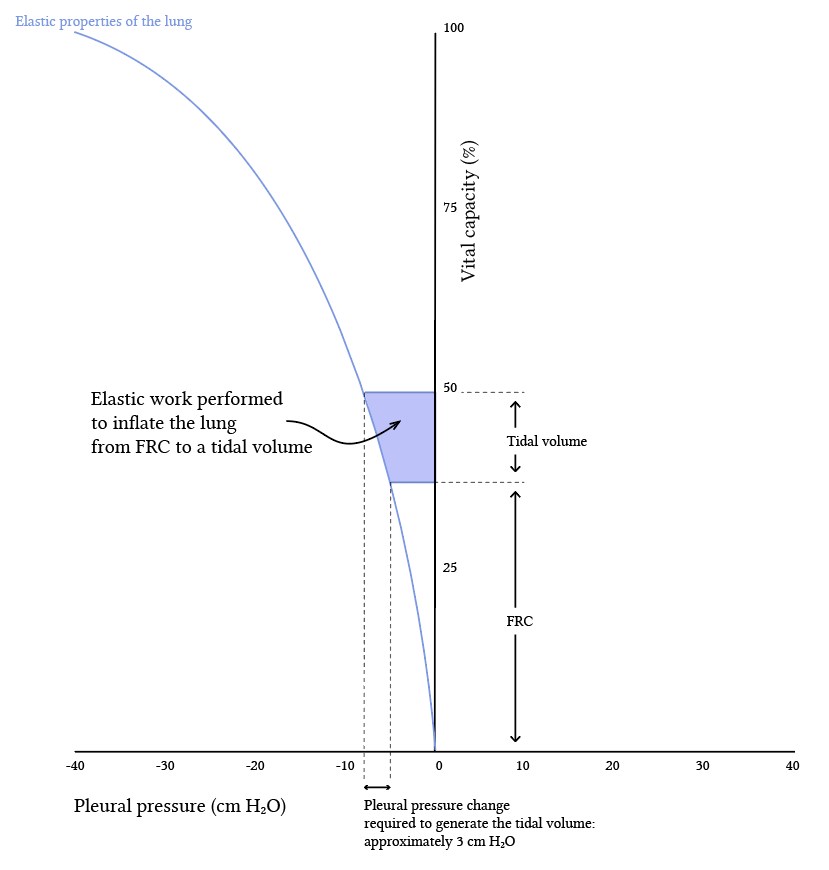 Of course, work must also be done to deform the chest wall. In this case, the chest wall wants to spring out and occupy a larger volume than the FFRC, and so work is actually done to reduce the chest wall volume down to FRC: 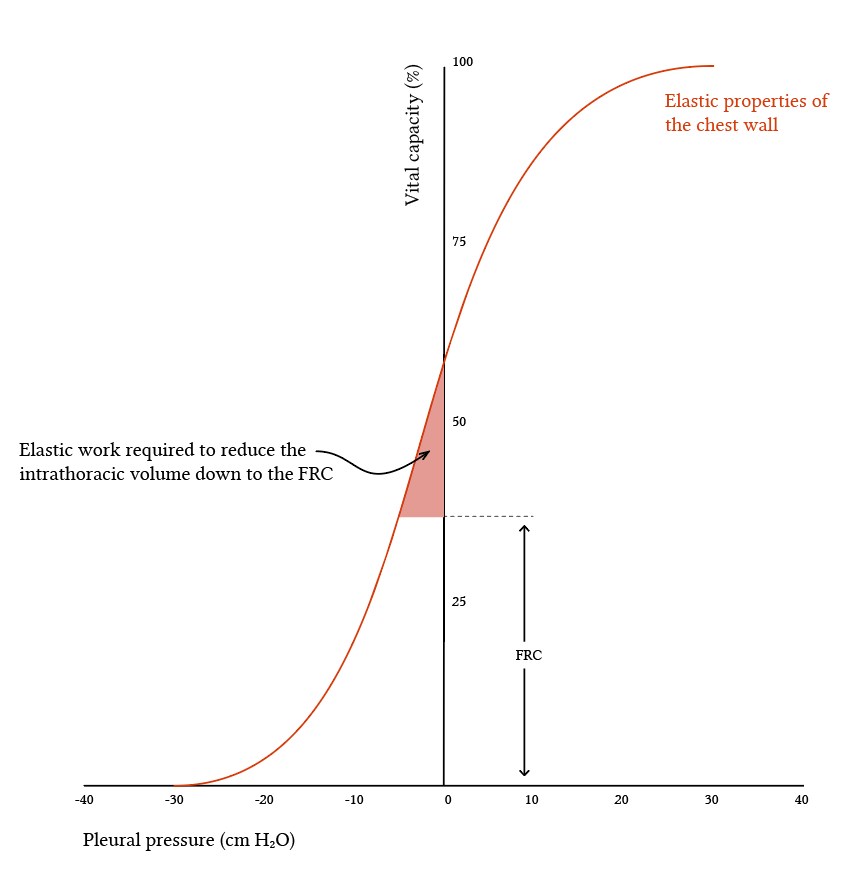 So, if we put these graphs together, we can see that they overlap. The most significant implication of this is that some of the work done to inflate the lung is done by the chest wall, i.e. the elastic recoil of the ribcage serves to inflate the lung without any muscular assistance: 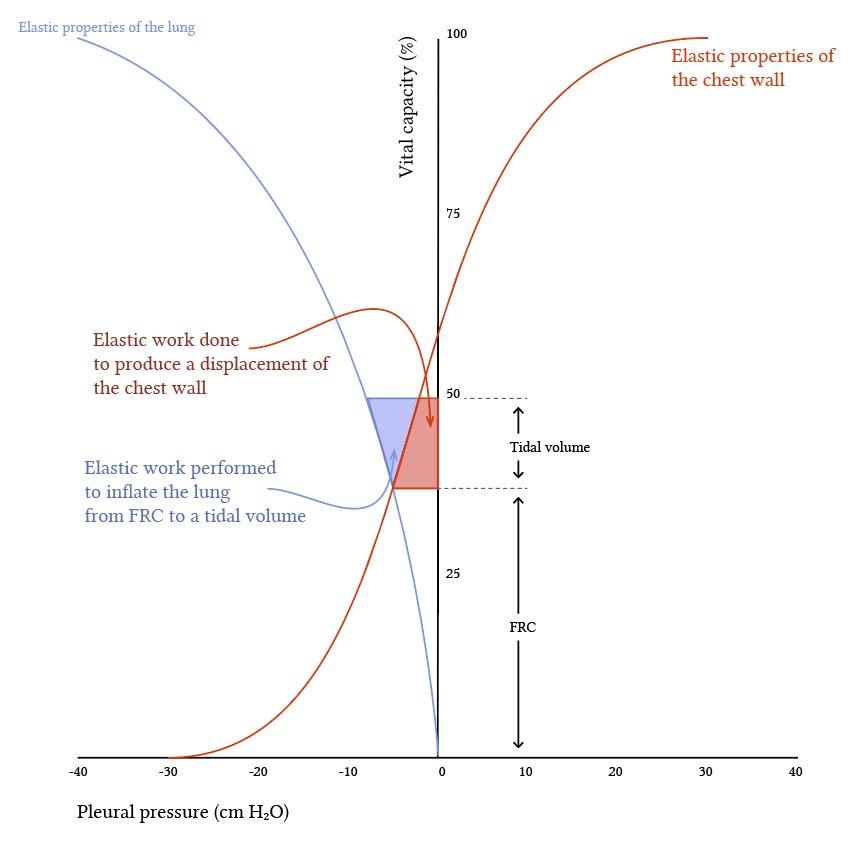 This, the small blue triangle here, is therefore the only work done to inflate the lungs; this area is much smaller than it was on the first graph, because the ribcage is doing most of the work.

Additional factors need to be considered here, beyond the elastic properties of the tissues. Work is also being done to defeat airway resistance, and to overcome the resistance of any interfering critical care equipment (eg. an endotracheal tube and ventilator circuit). The diagram can be expanded to include these elements: 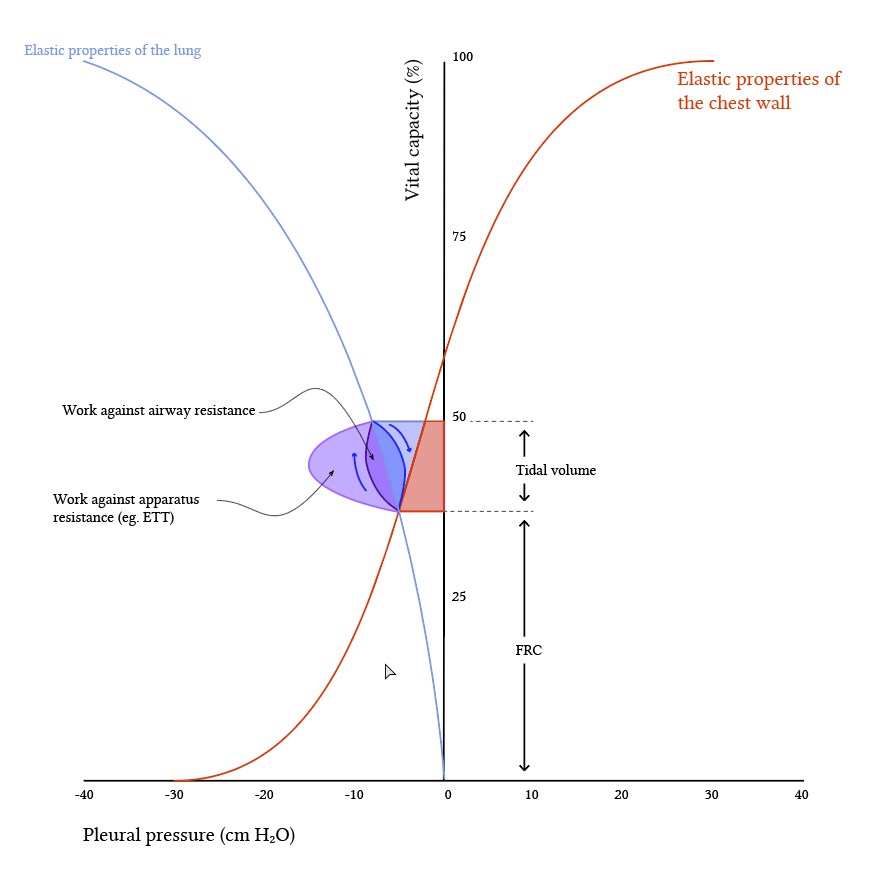 The added lens-shaped area covers the work done to overcome the inspiratory and expiratory airflow resistance. On expiration, no added work needs to be done because the elastic recoil of the lungs returns some stored energy. On inspiration, some added work needs to be done to overcome the resistance of the airways, as well as the resistance of any added artificial airways.

Now, we are left with a diagram which describes the components of the work of breathing:

Additional components to the resistive work are all components of respiratory resistance, and include inertance and the work done to compress the intrathoracic gas volume, but because the contribution of these elements is laughably small, one might think that they could probably safely omit them from their SAQ answer. Certainly they do not appear in any of the college comments for the questions on resistance. However, in their comments to Question 2 from the first paper of 2021, the college examiners remarked on the need to give "a detailed explanation" of all three components, and so they are included in the grey box summary above.

These were the three main components of work of breathing which were listed by the examiners in their comment. Of these, elastic  resistance and airflow resistance are fairly self-explanatory. Viscous resistance,  on the other hand, does not appear in every textbook - certainly not in Nunn's. It is a term which one encounters in the literature, used in reference to , in sources of a certain vintage, such as Jonson & Olsson (1971) or Otis et al (1950). Its use seems to vary between authors: some refer to the viscosity of respiratory gas, whereas others refer to the resistance of the chest wall and other tissues. One might infer that the latter definition is favoured by the college examiners frow the way they seem to be using it (i.e. alongside "airflow resistance" which would incorporate all gassy matters).

Viscous resistance can be called "viscous" because it opposes motion, in the same way as viscosity of fluids is defined as  force per unit area resisting uniform flow. This resistance is due to the lungs sliding along pleura, abdominal cavity contents shifting, and the mediastinum being compressed by the expanding lungs. In health, its contribution is very minor. Crosfill & Widdicombe (1961) reported a figure of around 10%, and 20% is often seen quoted in the textbook chapters (without a literature reference).

Work of breathing in the presence of respiratory pathology

Using these graphics, one may be able to represent different forms of mechanical lung problems. Realistically, this would only ever be limited to representations of scenarios where there is increased airway resistance or diminished lung compliance. These are also presented by Banner et al (1994), and their modified versions are offered below. 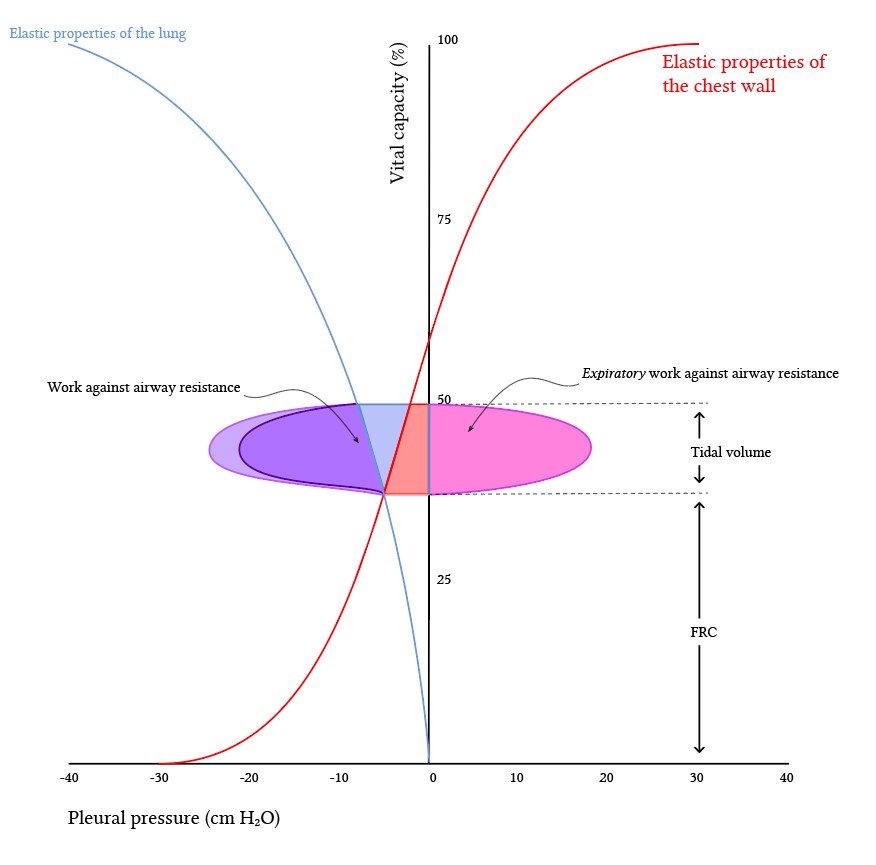 The following graph demonstrates work of breathing in the setting of decreased lung compliance. 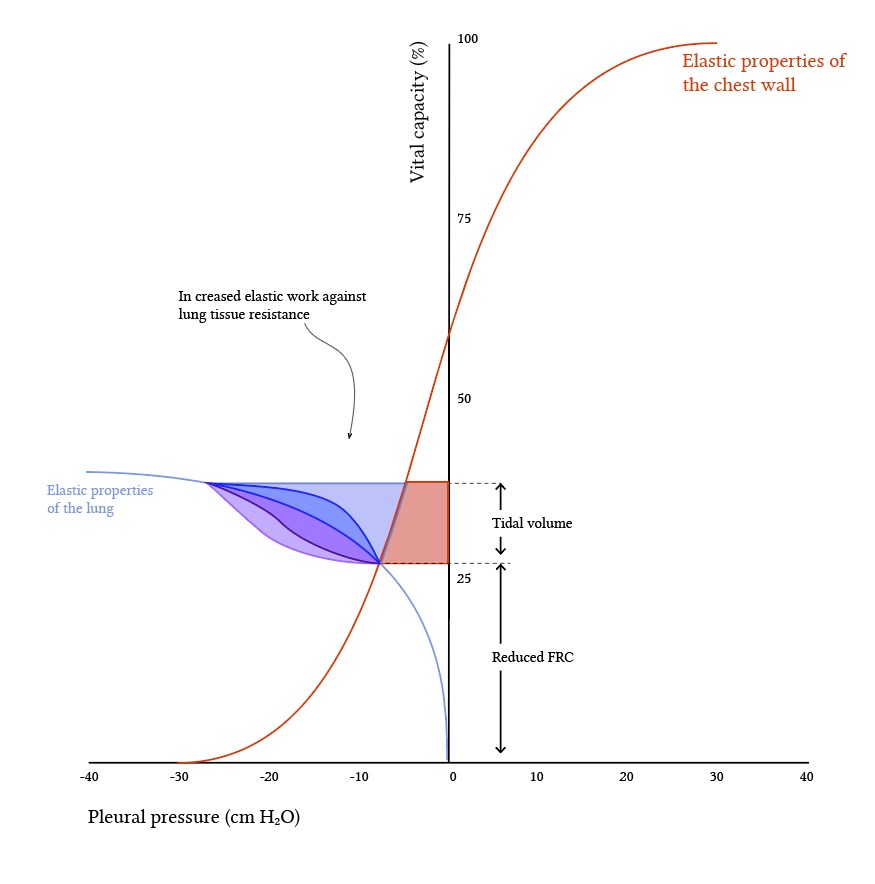 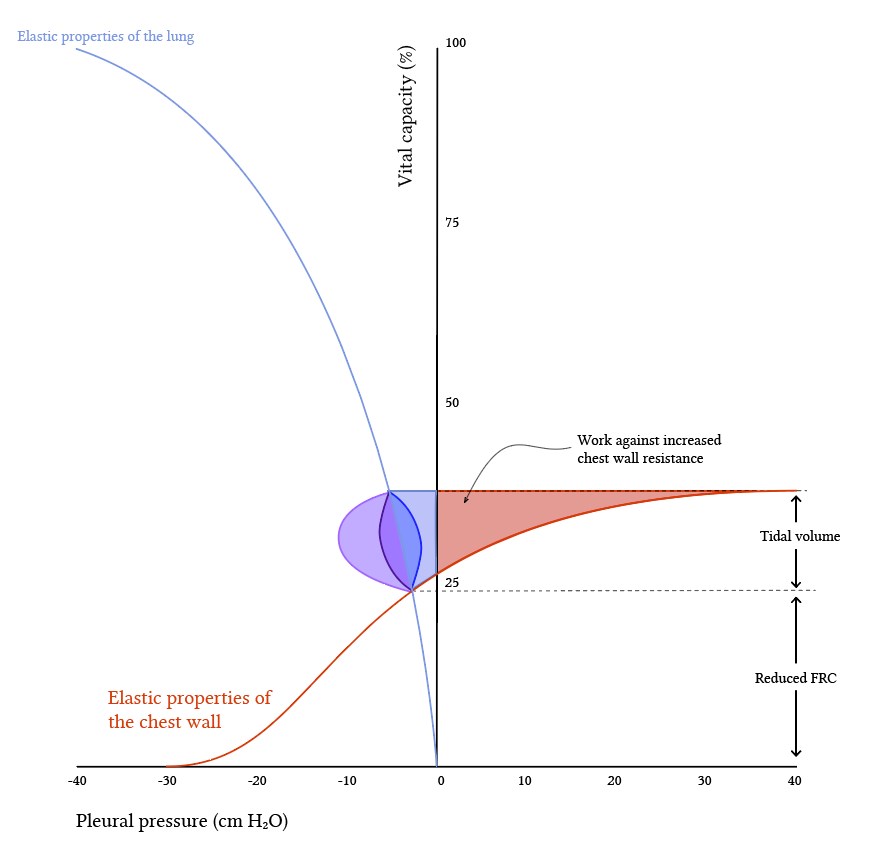 This time, the increased work is being done to increase the chest volume again the resistance of chest wall tissues, eg. a circumferential burn. Again, the FRC is reduced because the equilibrium of chest wall and lung elastic pressures occurs at a lower volume.

Campbell, Edward James Moran. The respiratory muscles and the mechanics of breathing. Lloyd-Luke, 1958.

Jonson, B., and L. G. Olsson. "Measurement of the work of breathing to overcome pulmonary viscous resistance." Scandinavian journal of clinical and laboratory investigation 28.2 (1971): 135-140.

Crosfill, Mt L., and J. G. Widdicombe. "Physical characteristics of the chest and lungs and the work of breathing in different mammalian species." The Journal of physiology 158.1 (1961): 1-14.