Measurement of lung volumes and capacities

This chapter is most relevant to Section F4(i) from the 2017 CICM Primary Syllabus, which expects the exam candidates to be able to "explain the measurement of lung volumes and capacities and factors that influence them". This has appeared a couple of times in the primary exam:

Both of these questions asked specifically about the FRC, and how it is measured. Consequently, to maintain some attachment to an exam focus, the measurement of the FRC is discussed in most detail here. The measurement of the other volumes is mentioned in passing wherever it appears relevant.

For this topic, the single best resource is probably Wanger et al (2005). Coates et al (1997) do an excellent job of explaining the measurement of lung volumes by plethysmography, and Newth et al (1997) are the go-to source for the nitrogen washout technique.

Measurement of the FRC by nitrogen dilution

Measurement of lung volumes by the measurement of nitrogen washout was probably the first clinically relevant method, described by Darling et al (1940).

The technique is as follows:

There are various inaccuracies and caveats involved in this process:

This method also relies on the measurement of an exhaled gas concentration, except this time one administers a known volume of this gas, and measures the exhaled concentration. Though strictly speaking any gas could be used for this, realistically one would prefer to use some non-toxic gas which has minimal blood solubility and which is cheap enough to use clinically. The blood solubility thing is very important, as the concentration of exhaled tracer gas will be lower if any of it managed to get out into the pulmonary circulation. Nunn's mentions helium (it ticks all the boxes), but others have used various weird gases such as sulfur hexafluoride and argon.

The theory is similar to the concept of measuring the volume of distribution. In this diagram, the volume of tracer is comically exaggerated to make the maths easier; in reality one would usually give 50ml of helium, much less that is required to make your voice sound funny. 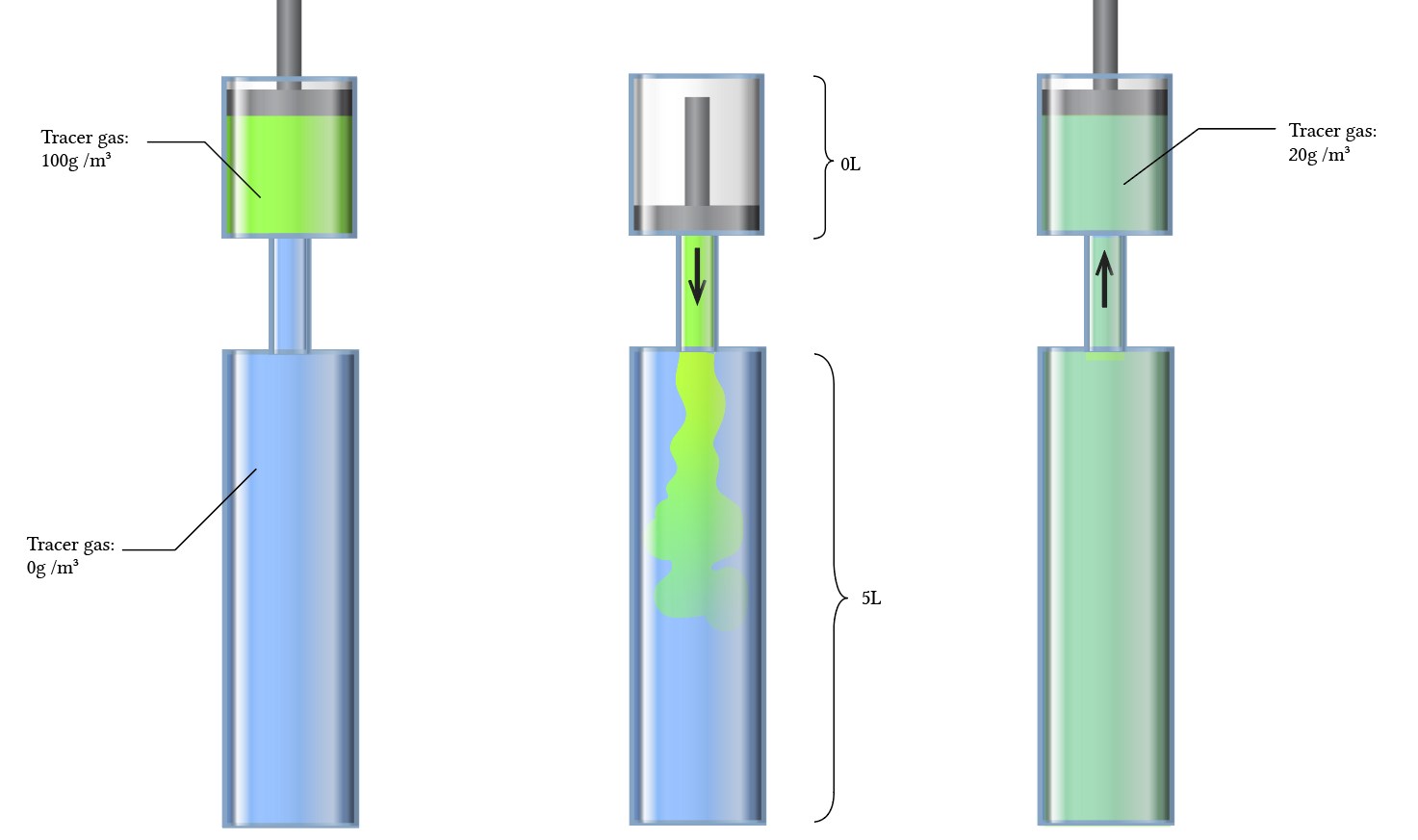 In short, the process is as follows:

So, in the diagram above, the exhaled gas concentration is 20g/m3, whereas previously it was 100g/m3. in 1L. It is as if the gas was diluted by 5 times. Thus, the intrathoracic "volume of distribution" must have been 5L. The equation for calculating this is:

This obviously has some problems:

Measurement of the FRC by body plethysmography

This method is also ancient. It was first devised by DuBois et al (1956). The principles of this method are as follows:

This methods of measurement has the distinct advantage of being able to measure all of the gas in the chest, including the gas which is trapped behind a bunch of collapsed airways. The disadvantages are fairly benign; the main risk is that the patient's bowel gas (however much of it there is) ends up being compressed by the expiratory effort, which affects the measurement somewhat. Unless one is performing plethysmography on a particularly gassy patient, this should not be a major influence.

Darling, Robert C., et al. "Studies on the intrapulmonary mixture of gases. I. Nitrogen elimination from blood and body tissues during high oxygen breathing." The Journal of clinical investigation 19.4 (1940): 591-597.