What do the examiners want? A lot. According to the comments to Question 13 from the second paper of 2020, the candidates were expected to discuss "volume, pressure, resistance, regulation and regional distribution and function". So, everything.

Naeije et al (2013) and the older Waaler et al (1971) were the main resources used to construct this chapter, and are well-structured revisions of the major topics, worth reading but unfortunately paywalled. If one starts paying for things like that, one identifies oneself as a reader with infinite resources, in which case one can also splurge on Alfred Fishman's "The pulmonary circulation" (JAMA,  1978-  an excellent narrative overview), or the ancient grimoire by Domingo Aviado (1965).  Or one might like to read John B West's rambling discourse on the evolution of the pulmonary circulation. The only freely available peer-reviewed article found under the search term "physiology of the pulmonary circulation" is Hamilton & Augusta (1951), which is written remarkably well but which is hopelessly out of date. None of these is going to help you pass the primary exams, of course. You may as well just buy Nunn's.

The lung receives all of the cardiac output, which means this 500-gram organ ends up flooded with ten times its own weight in blood, every minute; and at any given time it is home to about 10% of the circulating blood volume.  This figure (500ml or so) and the evidence behind it are dealt with in greater detail elsewhere, in the chapter on the non-respiratory function of the lung where its role as a reservoir of blood is discussed. Here, it will suffice to say that:

Here's a nice freshly recorded pulmonary arterial pressure waveform, albeit a little higher than one might normally expect (understandably, this being a cardiothoracic ICU patient). On monitors around the world, one expects to see this waveform is conventionally rendered in yellow, perhaps because pulmonary artery catheters are conventionally yellow, or perhaps because blue and red were already taken. 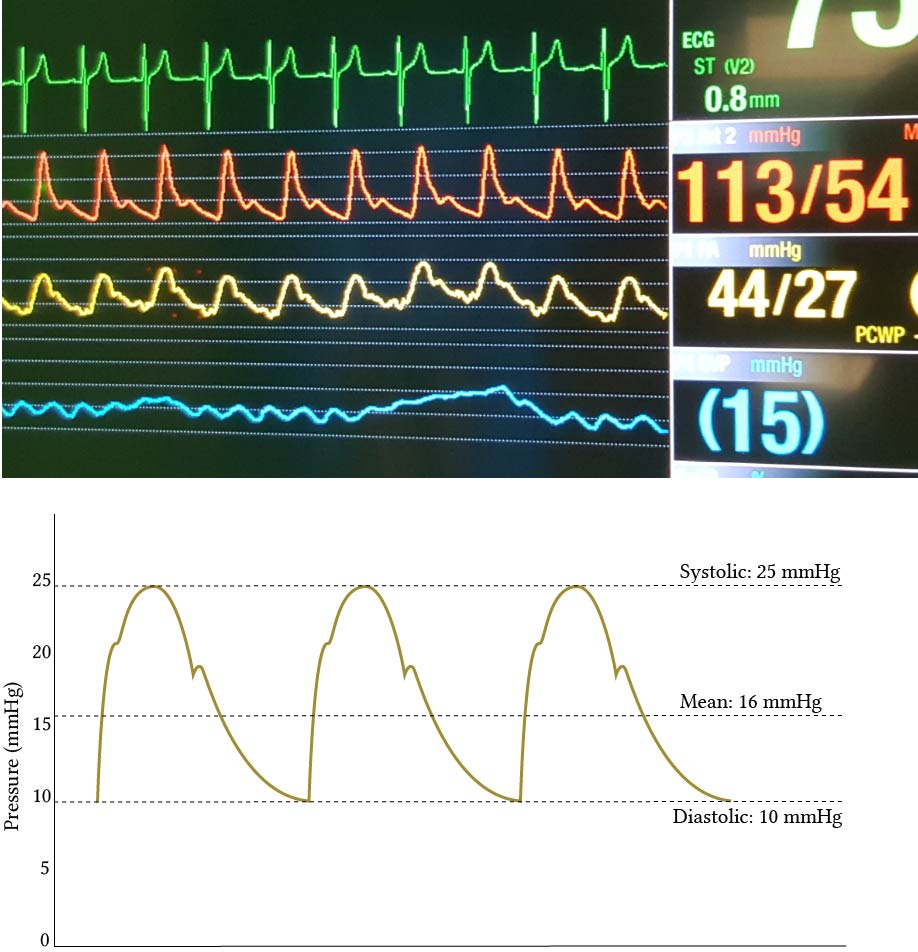 Like systemic arterial blood pressure, the pulmonary arterial pressure trace can be analysed, and its various component parts have a hidden meaning to the discerning eye:

Of these features the interesting ones are:

The reason for the rather modest pressure in the pulmonary arteries is the fact that pulmonary blood vessels are rather thin-walled, with little muscularity (as compared to their systemic counterparts). This means the pulmonary circulation has some impressive elasticity. Just at rest, from beat to beat, the pulmonary blood volume varies by around 50ml over the course of a single cardiac cycle (Ugander et al, 2009). When cardiac output increases, say during extreme exercise, the pulmonary blood flow obviously also increases but the pressure in the arterial circulation remains the same. Trying to resist talking about resistance until the Pulmonary vascular resistance section down below is quite difficult at this stage, and so one might segue into a discussion of pulmonary capillary pressure.

A measurement of pressure in the pulmonary capillaries is difficult to perform. In an attempt which would preempt future designs by Swan and Ganz, Hellems et al (1949) introduced a thin catheter into the pulmonary arteries of thirteen people, all of whom for some reason had primary syphilis. Presumably the investigators felt that this identified them as being of an especially agreeable character, and most likely to give consent for the experiment. The catheter was advanced until it wedged itself in a pulmonary artery of around 2-3mm diameter, and then it was transduced. The idea was that, in the absence of arterial pulsation from the pulmonary artery, such "occlusion pressure" measurements would yield the pressure of the pulmonary capillaries. The original pressure trace images created during these first recordings did not withstand the brutal attention of whatever steampunk scanner APS are using, and is unfortunately unusable even by the low standards of Deranged Physiology. Suffice to say, it demonstrates a familiar waveform which (for reasons explained later) represents pulmonary venous pressure rather than the pressure in the capillaries. This waveform (discussed in detail below) usually looks like this:

The direct measurement of pressure in the pulmonary capillaries is actually quite challenging. The main barrier here is really the inaccessibility of the capillaries: it is difficult to get a measurement probe into them without destroying them and everything around them. With respiration and cardiac pulsation, these capillaries are a microscopic moving target, and the overlying visceral pleura is sufficiently tough to break your micropipette tips. Bhattacharya et al (1980) had overcome this by perfusing a dog lung with non-pulsatile flow and constant filling pressure, which allowed them to determine the pressures in vessels of different diameters, including pulmonary arterial and venous capillaries. Those micropipettes did not measure any waveforms (the flow was constant), but data from the investigators' Table 1 can be used to construct this graph of pressure changes along the pulmonary vascular tree: 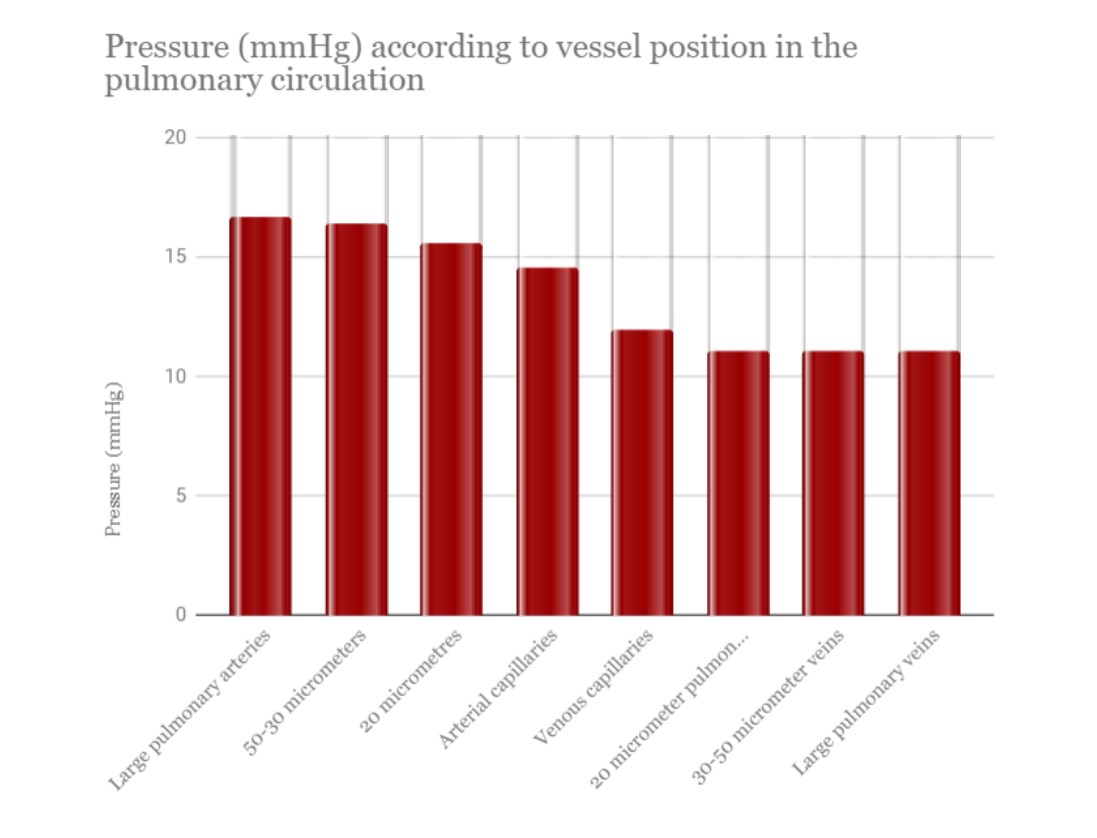 Though the investigators perfused their isolated dog lungs with a blood flow which they felt to be closely resembling the physiological, it was still a continuous flow. One cannot help but ask, what would be the difference if the flow were pulsatile? The answer is, probably not much, at least in terms of mean capillary pressure. However, pulsatile blood flow in pulmonary capillaries helps recruit some of the otherwise collapsed capillaries during systole, and they remain recruited even in diastole. These lightly modified diagrams from Presson et al (2002) demonstrate, by showing alveolar capillary beds, that pulsatile flow increases the number of perfused capillaries by about 100%:

So, how do you measure the pulmonary capillary pressure in the living, pulsating human? And more importantly, what would be the point? The reader who asks these difficult questions may be directed to the chapter which deals with the measurement of the pulmonary capillary hydrostatic pressure, though they are directed there with the caveat that the content there is completely pointless from both an exam and a practical clinical standpoint. In brief summary, the capillary pressure lays somewhere between the pulmonary arterial diastolic and the wedge pressure (usually about half way) and it can be estimated by extrapolating a couple of curves, or by calculating something called the Gaar equation (1967), or by just crudely eyeballing the shape of the curve like some kind of savage. Neither the pretentious nor the rustic versions of this method have any advantage over one another because the hydrostatic pressure of the pulonary capillaries is only one variable in the immensely complex set of variables which determine whether you develop pulmonary oedema, and so measuring this isolated parameter is generally viewed as a waste of time.

To add an extra layer of confusion to an already inaccurate series of pressure values, one could also point out that pulmonary capillary pressure varies depending on where in the lung it is measured, mainly because of the gravity-related changes in hydrostatic pressure between different regions of the lung. Nunn's gives an excellent diagram to illustrate this concept (page 91 of the 8th edition), and though there is no supporting reference offered, we can assume it proibably came from the classic paper by West et al (1964), though the authors measured blood flow instead of pressure. This is discussed in greater detail in the chapters dealing with ventilation-perfusion matching and Wests' zones. For now, it will suffice to mention that pulmonary arterial and capillary pressures are affected by the hydrostatic pressure gradient in the erect lung: 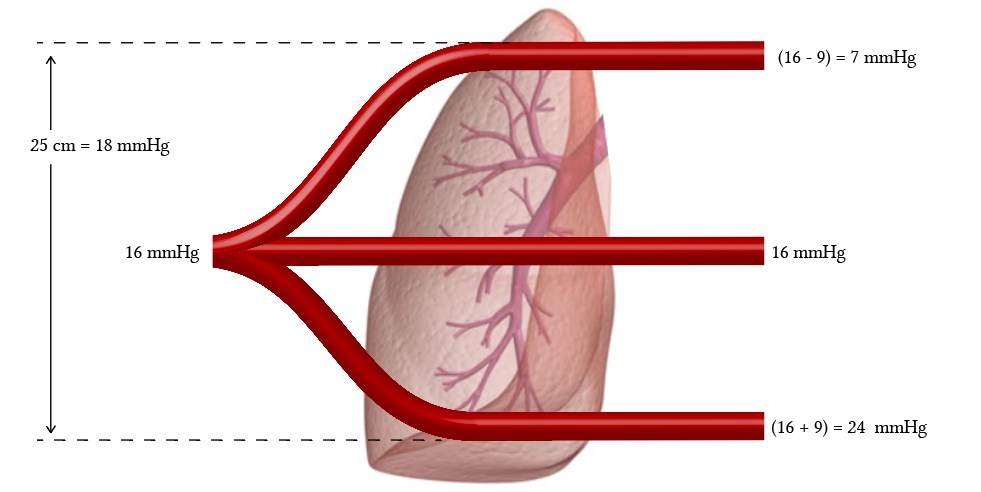 Smiseth et al (1999)  quote a mean pulmonary venous pressure of around 10.3 mmHg.  Judging by the abovementioned constant flow experiments performed in isolate dog lungs, the pulmonary venous resistance must be fairly low and the pressure of the entire venous system must be pretty uniform. Flow here occurs mainly because of the pressure gradient between pulmonary venous capillaries and the larger pulmonary veins. There is a pulsatile waveform here, which resembles the central venous pressure waveform.  Hellevik et al (1999) offer an excellent breakdown of this waveform, relating its features to the events of the cardiac cycle and specifically to left atrial activity. For the purpose of this (already needlessly detailed) chapter, the added complexity would add nothing to the exam performance of the readers, and so discussion of the pulmonary venous pressure waveform analysis will be limited to this diagram: 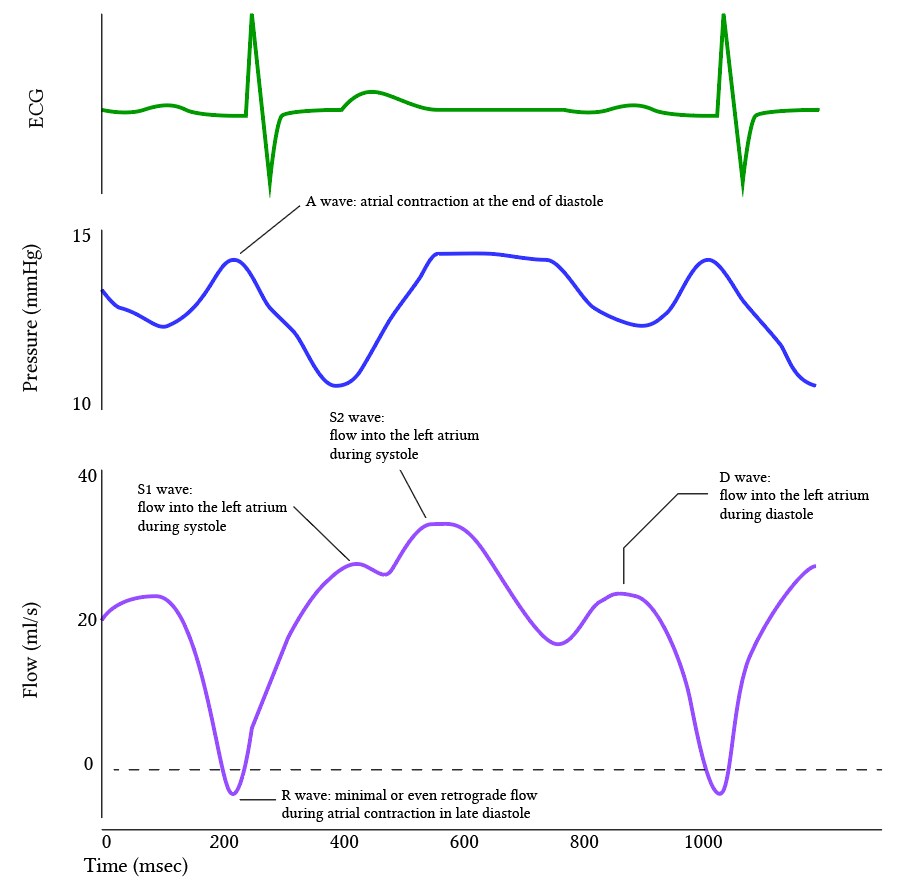 Well, perhaps some added discussion is called for. Basically, the waveforms are easily explained by the events of the cardiac cycle:

Rather than digress extensively on the relative meaninglessness of this variable from a diagnostic and clinical standpoint, the objective here will be to describe its measurement and characteristics for an audience of junior trainees who will be expected to memorise facts for their exams. Thus, pulmonary vascular resistance is:

But, most often you will see this equation as:

Given that the pressure drop across the mPAP-PAOP gradient (otherwise known as the transpulmonary pressure gradient) is about 10 mmHg, one might expect the PVR to be a very low value, much lower than that of the systemic circulation where the pressure drop is much higher. A normal PVR is listed as 100-200 dynes/sec/cm-5, where the upper range is around 250 (from this Edwards Life Sciences propaganda pamphlet). When it is indexed to body surface area, it becomes PVRI, with a normal range of 255 - 285 dynes-sec/cm–5/m2. 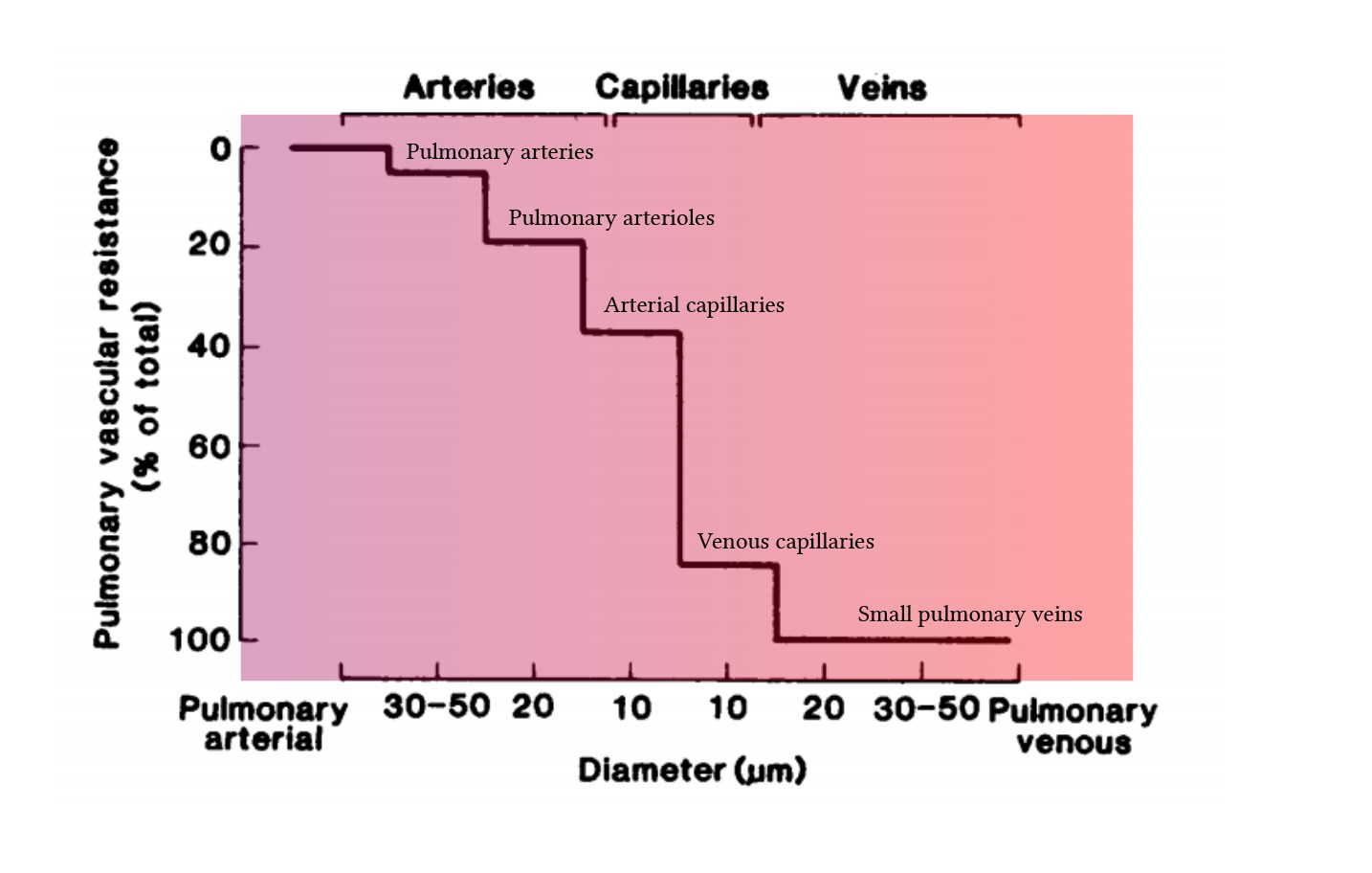 Aviado, Domingo M. The Lung Circulation: Physiology and Pharmacology. Elsevier, 2013 (except the book itself says "1965"...)

Lagerlöf, H., and L. Werkö. "Studies on the circulation of blood in man VI. The pulmonary capillary venous pressure pulse in man." Scandinavian Journal of Clinical and Laboratory Investigation 1.2 (1949): 147-161.

Bouwmeester, J. Christopher, et al. "Genesis of the characteristic pulmonary venous pressure waveform as described by the reservoir‐wave model." The Journal of physiology 592.17 (2014): 3801-3812.