West's zones of the lung

This chapter is most relevant to Section F6(ii) from the 2017 CICM Primary Syllabus, which expects the exam candidates to be able to "describe West's zones of the lung and explain the mechanisms responsible for them". Those mechanisms responsible for them are actually discussed with reasonable detail in the chapter on global and regional ventilation/perfusion differences, and will be covered here only to the extent necessary to explain West's zones, and to answer Question 3 from the first paper of 2016 which explored this topic. That SAQ is clearly about West's Zones, because it asks the candidate to "compare the physiology of the apex of the lung with the base of the lung in the upright position". In general the First Part examiners seem weirdly coy with this concept: Question 10 from the second paper of 2021 was more explicitly about the " the ventilation / perfusion (V/Q) relationships in the upright lung according to West’s zones", whereas Question 12(p.2) from the second paper of 2008 was about "gravity dependent processes which affect pulmonary blood flow", i.e. they clearly wanted West's zones, and even said so in their comments, but for whatever reason they decided not to ask for this specifically in the stem.

It is difficult not to find a good reference for this fundamental topic, and virtually every textbook contains some mention of it even if it is not concerned specifically with respiratory physiology. Because of how fundamental and uncontroversial it is, every source contains essentially the same information and there is little to help one distinguish between them. In terms of pedigree, one may go to the original article by J.B. West et al (1964).

West's Zones of the lung

Incidentally, he never called them "my Zones". In actual fact these should really be called "Permutt's Zones" because Solbert Permutt and colleagues described the concept first, in 1962; but West et al were the first to demonstrate the specifics experimentally. They took a single mongrel dog lung (the right) and perfused it with the blood of another dog. Radioactive xenon was then added into the blood, and a scintillation counter measured radioactivity up and down the lung, which would have been proportional to blood flow. In short, they found that there was a vertical gradient of perfusion, and that on the basis of its perfusion the lung could be divided into three discrete areas (a fourth was added later, in 1968):

These concepts were then united in a diagram which has become famous, and which has been reproduced by virtually every physiology textbook: 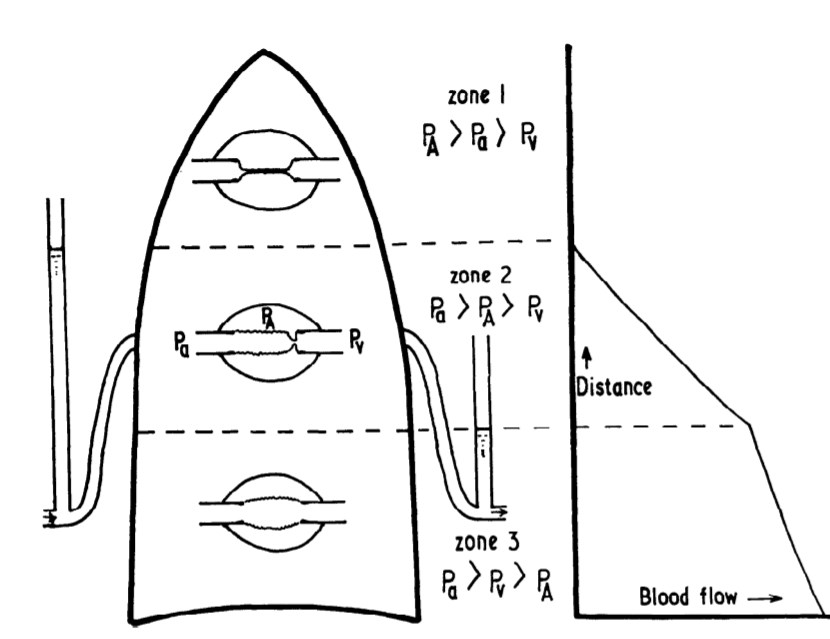 West's Zone 1 of the lung

Zone 1 is usually defined as:

"...that part of the lung above the level at which arterial and alveolar pressure are equal".

This definition comes from the original West paper, and therefore resembles a stone tablet carving in terms of its level of authority. Some authors (eg. Levitzky's textbook, 2007, as well as Guyton & Hall) also refer to this zone as dead space, devoid of perfusion. The original (West's) definition of Zone 1 does not specifically demand that this area receive no blood flow, but does observe that in their specific dog experiment there was no blood flow in that zone.

Does that mean that Zone 1 should be considered dead space? Interestingly, probably not. True, some of Zone 1 is probably going to be dead space, but really, all the definition asks for is for the alveolar (atmospheric) pressure to be higher than the alveolar capillary pressure. So even though this zone certainly does not enjoy normal perfusion, Lamm et al (1995) found that up to 15% of the total pulmonary blood flow went into Zone 1 in their experimental rabbits. Moreover, some gas was exchanged up there, i.e. the Zone 1 blood flow was not occurring via any sort of anatomical shunt. At the same time, the conditions (alveolar pressure in excess of capillary pressure) were satisfied, at least for the measured lung units. Authors have suggested that this "cheating" Zone 1 perfusion occurs via "corner vessels", capillaries which occupy the space at the junction of alveolar septa and which thereby escape the pressure effects when alveoli are overdistended. However, this tangent is probably meaningless from the perspective of both the exam candidate and the clinician, as functionally there is no difference between "zero perfusion" and "some minimal perfusion and minimal gas exchange".

In summary, the conditions in Zone 1 are:

Zone 1 conditions are generally said to be absent from the normal lung under physiological conditions. Even in the upright person, with the hilum 15cm below the apex of lung, a low-ish pulmonary arterial systolic pressure of 20mmHg (27 cm H2O) will still be high enough at the apex (13 cm H2O) to overcome atmospheric pressure. Therefore, it stands to reason that in order for Zone 1 conditions to be established, either the pulmonary artery pressure needs to be very low, or the alveolar pressure must be very high, or some combination of the two.

Such a situation might occur in the following scenarios:

West's Zone 2 of the lung

Other authors give a slightly different definition. For instance, Guyton & Hall (12th ed, p.480) define it as the area were there is

This also sounds plausible, but the definition from West is probably definitive (and seems to be repeated across a larger number of textbooks). There is after all a reason they call them West's Zones and not "Guyton & Hall's Zones". In either case, this Zone represents the bulk of the lung in most normal healthy people, and in most postures. The lower border of this Zone may rise higher in the vertical lung with anything which increases cardiac output, eg. exercise, sepsis, pain, stress, etc.

In summary, the conditions in Zone 2 are:

West's Zone 3 of the lung

"Zone 3 is that part of the lung below the level at which venous and alveolar pressures are equal."

This is the zone which everybody seems to agree on the definition of, and most textbooks do not vary dramatically on their description of it. Both the arterial and the venous pressures are higher than the alveolar, which means that there is an uninterrupted column of blood in the vessels between the right ventricle and left atrium. Note how this definition theoretically includes atelectatic lung regions which contain no air (strictly speaking, those would also be "below the level at which venous and alveolar pressures are equal").

In summary, the conditions in Zone 3 are:

West's Zone 4 of the lung

It is probably correct to call it "West's Zone 4"; even though West never really had a fourth zone in the original 1964 paper,  he was one of the "et al" of the paper by Hughes et al (1968). Not all textbooks recognise this theoretical volume; for example Guyton & Hall (12th ed) and Levitzky (7th ed) stop at three zones. When one can find it, it is defined as the space where

"...flow is reduced ... because the calibre of the extra-alveolar vessels is narrowed by the increased interstitial pressure, as a consequence of the reduced expansion of the dependent zones."

This, in other words, is the bulk of atelectatic or oedematous lung at the very base of the chest cavity, where interstitial fluid pressure exceeds pulmonary venous pressure. As a result, blood flow is governed by the gradient between arterial and interstitial pressures.