This chapter is most relevant to Section F6(ii) from the 2017 CICM Primary Syllabus, which expects the exam candidates to be able to "explain ventilation-perfusion matching and mismatching". Fundamental concepts relevant to V/Q relationships and the factors which affect these are discussed in another chapter, and so the focus here will be on explaining what V/Q matching and mismatching is, and where it can be expected to occur. No written questions have ever interrogated this knowledge, leaving the candidates to make up their own mind as to whether this section merits their attention; and it would be quite reasonable for the pragmatic trainee to abandon it in favour of topics which are better represented in the exams. One would have preferred to also use this chapter to discuss in detail the effects of V/Q mismatch on gas exchange, which is definitely in the past exam papers - but that would overlap with the subject of Section  F6(viii), "explain the effect of ventilation-perfusion mismatch on oxygen transfer and carbon dioxide elimination". To maintain some attachment to the structure of the college syllabus, any talk of gas exchange will be avoided here as much as possible.

The best article to discuss ventilation and perfusion matching would have to be Petersson & Glenny (2014), mainly because it has the distinction of being free for all readers. All of the original articles quoted by Petersson & Glenny are paywalled, but their content is more interesting than educational, and one could easily just stick to that one paper.

Matching of regional ventilation and perfusion: the V̇/Q̇ ratio

By convention, ventilation is represented in physiology textbooks as V̇, borrowing the diacritical overdot above the "V" from Newton's notation because it represents a time derivative (i.e not just volume but volume over time). By a similar convention, blood flow is usually represented by an overdotted capital Q̇. Although it is also strictly speaking a form of "volume over time" and could also be represented with V̇, physiologists have traditionally used Q̇ because that is an abbreviation of the French quantité or the Latin quantitas, both languages which were dominant in the physics literature of the 18th and 19th centuries. Without any further digression, using the abovementioned abbreviations we arrive at the familiar representation of ventilation and perfusion matching, the V̇/Q̇ ratio. The proper use of diacritical marks being a dying art in this lawless post-apostrophe hellscape, even Respiratory Care have given up and officially resorted to the use of undotted V/Q, because who could possibly give a fuck.

Anyway. In an ideal scenario where blood flow is perfectly matched to ventilation, the V/Q ratio would end up being 1.0, and under these conditions, theoretically the gas exchange should be ideal. All of the lung units would get exactly the same volume of blood and air per minute, and the lung would be perfused in a perfectly homogeneous fashion. If one needed to represent this distribution, one could probably do so by plotting the flow (whether blood or gas) against V/Q ratio, and in this magical perfect lung it would look like this: 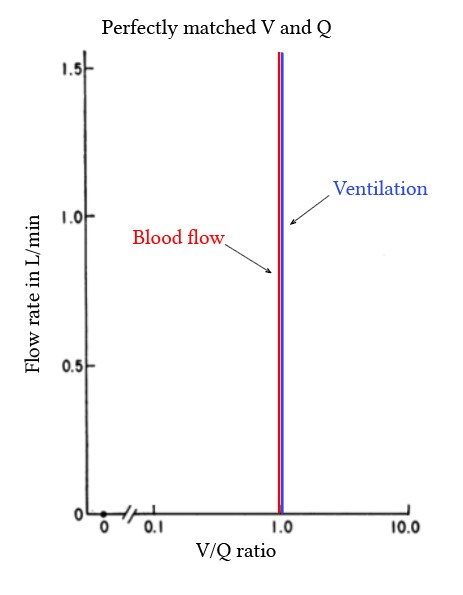 However, as mentioned in the paragraphs above, there are some differences in the blood and gas supply to different lung regions, i.e. some regions receive good ventilation and poor blood flow, whereas other regions are rich in blood supply but receive little air. One may expect a broad range of theoretically possible  V/Q ratios, spanning from zero (at the collapsed bases where V̇ = 0) to infinity (in the completely anaemic apices where Q̇ = 0). Classically, this spread of V/Q values is described as "V/Q scatter".

This notion suggests that there should be some sort of bell-curve-like Gaussian distribution of flow values for V̇ and Q̇. And if this lung is relatively healthy, there should be minimal scatter and the bulk of the lung will have near-ideal matching. Here's such a distribution from Wagner et al (1974), measured by an ingenious method from a healthy 22-year-old male: 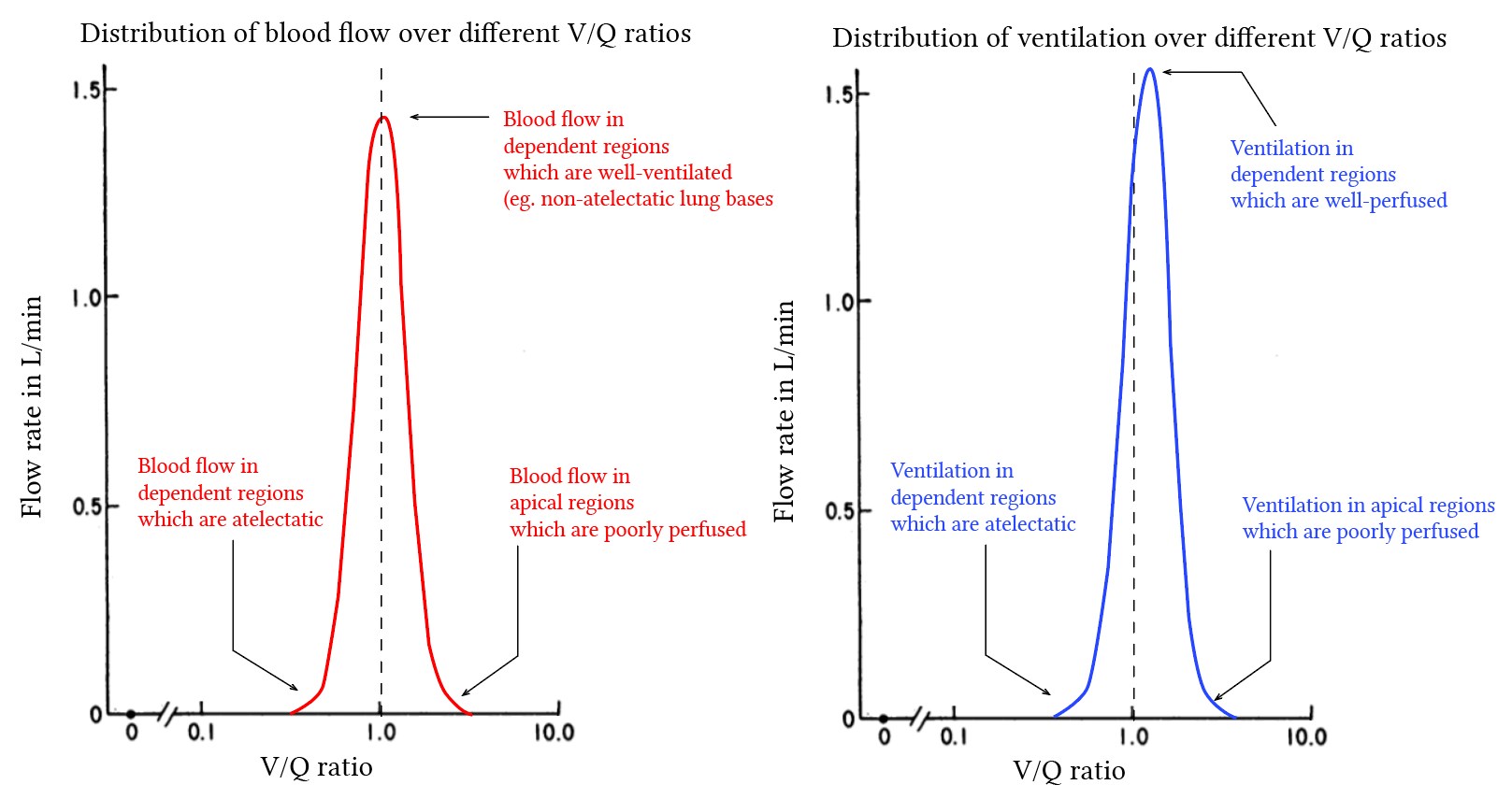 The typical V̇ would usually be about 4L/min of air, and the typical Q̇ would be about 5L/min of blood. As such, the "global V/Q ratio" would be about 0.8, if the results from the whole lung were averaged. The curves in the examples above were borrowed from Wagner, where the healthy adult male (M.S.) had a total alveolar ventilation of 5.3 L/min and a cardiac output of 5.8 L/min, giving a V/Q ratio of 0.93. The original diagram from Wagner et al had the ventilation and perfusion superimposed over a single set of coordinates, which is useful because it renders the inequality between V and Q as the difference in position between these two curves: 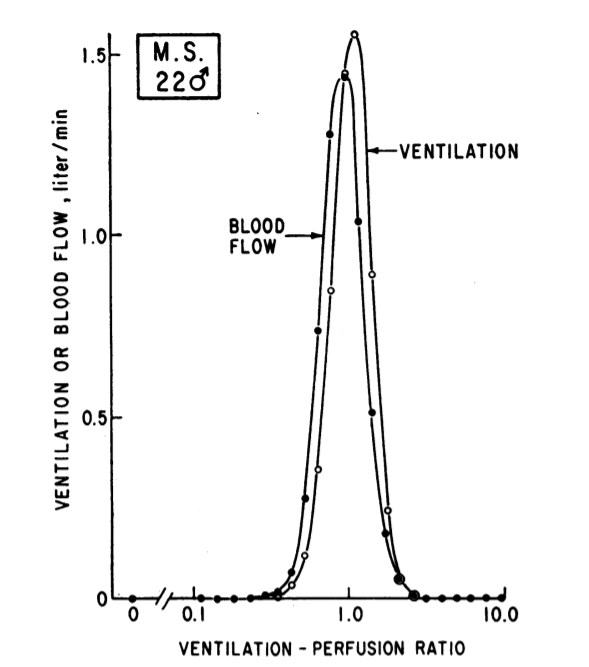 As one can see, though theoretically V/Q ratios can be distributed between zero and infinity, in this young person they were confined to a range between 0.3 and 3.0. That is probably the range of V/Q ratios which was asked for in the college examiner's comments to Question 6 from the first paper of 2008.  Blood flow was maximal through regions enjoying good ventilation, and ventilation was maximal in regions well supplied with blood. At the outer limits of the bell curve, the lower end of V/Q ratios represents regions of atelectatic lung, and the total blood flow to such regions was minimal (this guy's hypoxic pulmonary vasoconstriction was clearly working). At the upper limits, there was also minimal blood flow, which makes sense because this represents those regions of the lung which are not being perfused particularly well in spite of adequate ventilation.

The distribution of perfusion and ventilation are separated somewhat on the graph, but are still reasonably close together because this young lung is doing a great job of autoregulating its own blood flow. By comparison, here is the distribution which Wagner et al measured from a 44-year-old male (selected from among male non-smokers, a rare species in the fifties): 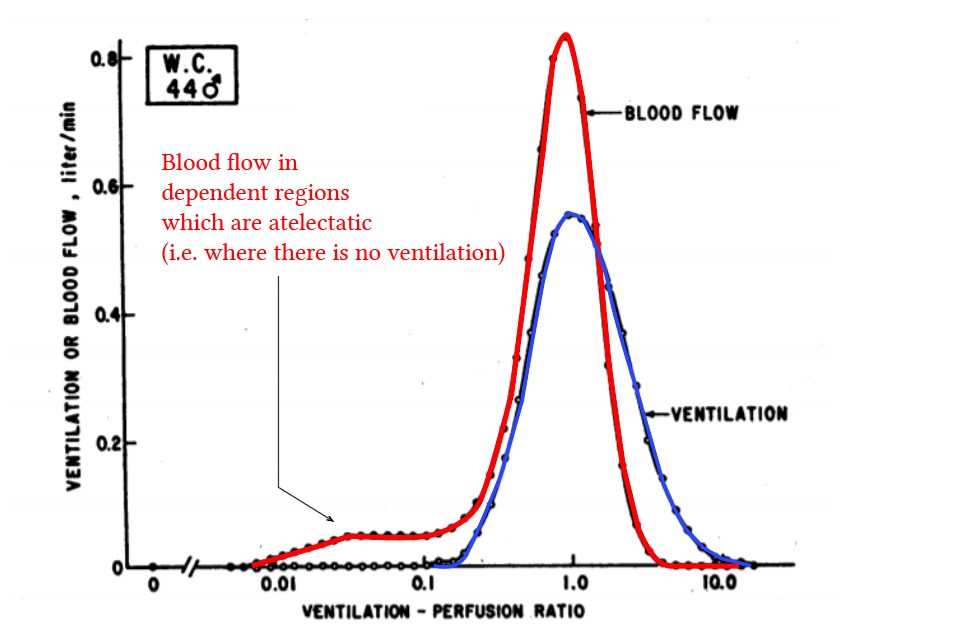 As one can plainly see, the V/Q matching is now much less efficient. There's a whole region of lung where there is plenty of blood flow but barely any ventilation, and there's poorly perfused lung where the ventilation is relatively good. This poorly ventilated lung region is probably the base of the lung, which ends up being below closing capacity due to the effects of age. Because of the distribution of blood flow to poorly ventilated lung regions, the PaO2 in this 44-year-old subject was 75 mmHg, whereas the 22-year-old had a PaO2 of 97 mmHg.