Dead space and its components

This chapter is most relevant to Section F6(v) from the 2017 CICM Primary Syllabus, which expects the exam candidates to be able to "define dead space and its components". This has come up twice in the past papers:

The single best peer-reviewed resource for this topic is probably Roberts (2015). For a nice historical perspective, one may lose oneself in Robert Klocke's essay "Dead space: Simplicity to complexity" (2006).  If one can get a hold of it, the article by Hedenstierna & Sandhagen (2006) is also valuable because it reaches beyond the normal anatomical-alveolar-apparatus trichotomy to find weird new dead spaces all over the place. In order to access it (as it will not show up in normal search results) one needs to dig it out of the Minerva Anaesthesiologica archive, where it is freely available to anybody who can answer a CAPTCHA.

Ward S. Fowler (1948), as a part of an introduction to his article, wisely counsels that "since the terminology used by various writers is not uniform, it seems advisable to clarify the meaning of dead space." This advice remains current. Though, like obscenity, everybody knows it when they see it, when asked to formally define dead space many people will actually give a definition for one of its components, usually anatomical dead space (this is true even of published authors).

The author of term is generally believed to be Christian Bohr (1891), who referred to it as "schädlichen Raumes" (literally "the harmful space").  The first time it referred to as "dead" was apparently by Haldane in 1895. Neither of these early pioneers had given much thought to the fact that people would have to remember this thing for their exams, and so nobody really focused on making a short pithy definition. In fact nobody had even settled on an official name to call it, as sixty years later Rossier & Bühlmann (1955) were still complaining that

"despite the acceptance of the term ‘dead space’ by most physiologists, there are nevertheless some who today still call it ‘noxious space’ (‘espace nuisible,’ ‘schadlicher Raurn’), ‘volumen inefficax’ etc."

Fortunately, the summary paragraphs from Nunn's (8th ed) give an excellent one-liner which is definitive as far as CICM First part preparation is concerned:

Dead space is the fraction of tidal volume which does not participate in gas exchange.

This is a perfect way of wording it, because takes into account the usual proportional relationship of dead space and minute ventilation, where:

In short, "alveolar ventilation" is the volume of gas which did something useful on its way through the lungs, and dead space ventilation is the volume which did not.  This volume of useless gas has three main components: apparatus dead space, anatomical dead space and alveolar dead space. There are a few others, but they occupy a weird fringe at the borders of the passing mark, and unless one really wants to wreck the CICM grading bell-curve one really does not need to think about them. For visual learners, one could represent these dead spaces in the form of an illustration: 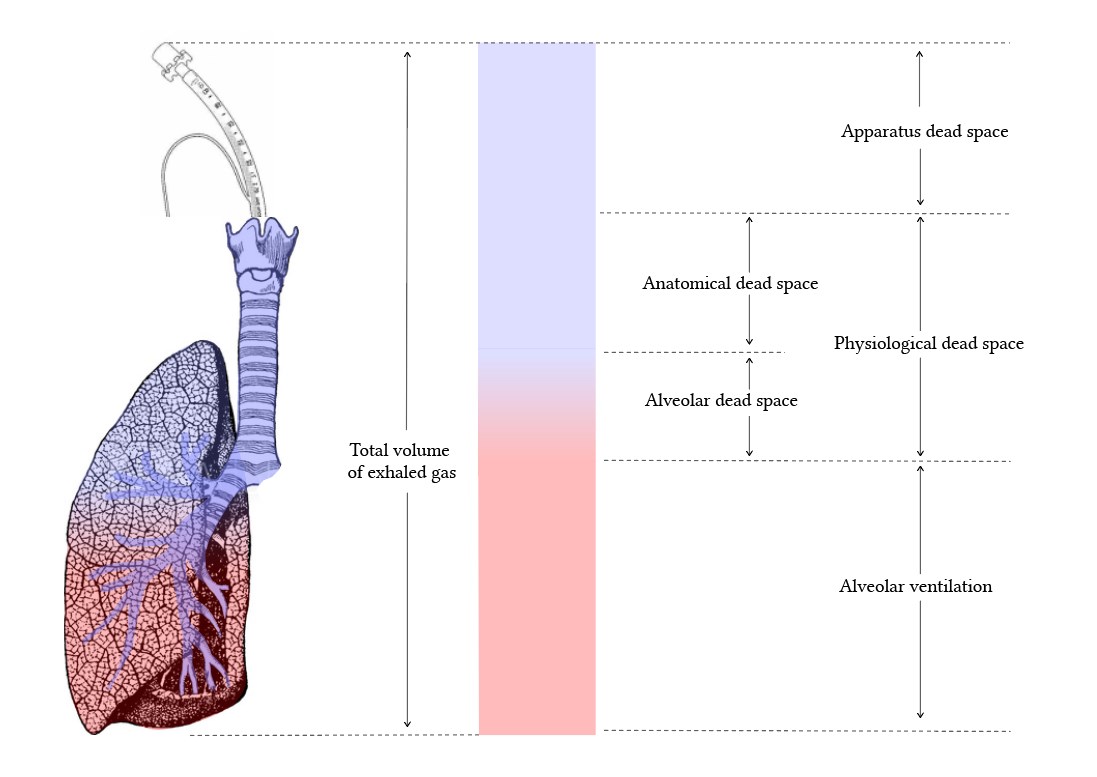 Physiological dead space is the combination of the anatomical and alveolar dead space components. Rather than representing it as a volume in ml/kg, it is better to represent it as a fraction of the tidal volume (or minute volume), largely because it tends to change together with the tidal volume. The normal values for this tend to differ across textbooks, but they all seem to fall into the ballpark of 20-30%. Henrik Enghoff's original 1938 paper gave 34% as the average value.

From a functional standpoint, physiological dead space is the thing you're measuring using the Enghoff modification of the Bohr equation, which is essentially just the difference between arterial and mixed expired pCO2 divided by the arterial pCO2. Here is a visual representation of this, for an example which will be used later: 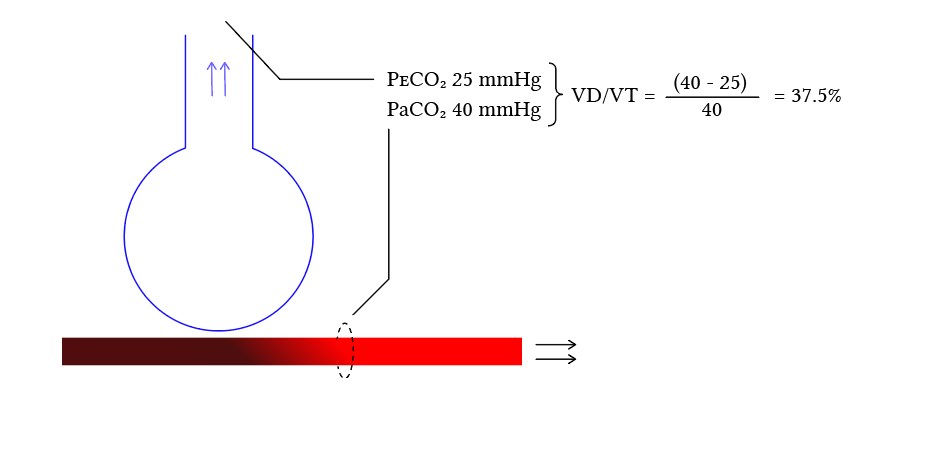 Note that the PECO2 is not the end tidal pCO2, but the mixed expired pCO2. The difference is quite substantial. The mixed expired pCO2 is the value you'd get if you collected all the expired gas into a bag, where it could mix vigorously and become homogeneous.  For a normal person, the mixed expird pCO2 is usually something like 25 mmHg (Hansen et al, 2007)

So anyway: the physiological is a virtual space, produced by the need to simplify the discussion of the lung as being composed of two compartments, one of which is completely unperfused. This oversimplification leads down weird avenues, for example where the presence of shunt can produce the appearance of dead space. However, it is generally accepted as a solid way to approximate the dead space fraction because it is so convenient (arterial blood gases being widely available), in contrast to other methods.

Of the dead space compartments, this one was discovered first, probably because the concept of alveolar dead space is more difficult to intuit than the idea that the trachea exchanges no gas. Thus, by 1882, Nathan Zuntz was able to measure the conducting airway volume in cadavers, and propose that this fraction of the tidal volume probably plays no role in ventilation.

In short, this volume encompasses from the lips and vibrissae to the innermost terminal bronchioles. This definition, though anatomically descriptive, fails to describe the relationship between the two components of physiological dead space. It would probably be better to define it as

This is also from Nunn's. It is a good functional definition, but it somehow fails to capture the way the conducting airways exchange no gas, which is a pretty central element. Also, by the time the CO2 concentration rises to its alveolar plateau, one is no longer talking about dead space, i.e. the definition would encompass both physiological and anatomical dead space. At risk of adding another pointless definition, one possible way to reword this would be:

"Anatomical dead space is the portion of dead space which is external to the alveoli, consisting of mainly conducting airways, and represented by Phase I and half of Phase II in the single-breath nitrogen washout test"

Anyway. Given the name, one might surmise that the volume of anatomical dead space is probably influenced by some anatomical factors. These are:

Anatomical dead space is also affected by flow characteristics during respiration, which is cheating in a way. Though under these circumstances the actual size and shape of the conducting airways remains largely the same, the changes in gas flow can produce situations where the apparent dead space volume has changed. This can happen during ventilation with low tidal volumes, or where the subject is performing a breath hold, or where high flow nasal prongs are involved.

The effect of a low tidal volume on anatomical dead space

By extension of the same thought as above, if one holds one's expiratory gases in one's conducting airways, given some time they will all mix by various means (cardiac pulsation agitating them, diffusion, etc etc). The outcome will be that, upon exhaling, one's larynx will contain a gas mixture which will resemble one's alveolar gas. The measurement of dead space by analysis of expiratory gases will therefore yield bizarre results, with anatomical dead space appearing confined to the volume of the supraglottic structures.

In the briefest way possible, alveolar dead space is all the dead space which is not anatomical. It is remarkable that such a simple concept should produce so much confusion, and the level of confusion seems to escalate the deeper one digs into the literature. The worst thing one could do is try to compare different authors' interpretations to establish one which is superior. For example, to borrow from Nunn's, alveolar dead space volume is:

"the part of the inspired gas that passes through the anatomical dead space to mix with gas at the
alveolar level, but which does not take part in gas exchange."

To word it slightly differently (part of the inspired gas might not sound scientific enough for some readers) the alveolar dead space volume can be defined as the fraction of the tidal volume which interacts with alveoli without any gas exchange taking place. Realistically of course this is a composite of gas coming back from truly unperfused alveoli together with gas coming back from alveoli which were merely underperfused, but it is convenient to pretend that this dead space volume is a sharply demarcated block of gas. If one is seduced by simplicity, one would hold to the definition that:

This is good enough for people who teach other people about lung physiology for a living, and it is also convenient because the Bohr and Enghoff methods of measuring dead space end up reporting a single volume which indeed has a V/Q = ∞. However, most reasonable people would probably want their definition to recognise that there are these shadowy regions of V/Q maldistribution, in which case:

Alveolar dead space is the volume of gas which ventilates lung units with V/Q > 1.0

Weirdly, other authoritative sources (eg. this article on PE by Goldhaber & Eliott, 2003) describe lung units with V/Q = ∞ as "anatomical dead space", and claim that anatomical dead space increases with PE, whereas "alveolar dead space" is presumably all those other lung units which have a V/Q ratio between 1.0 and infinity, including those whose V/Q ratio is immeasurably high but not infinite. Presumably, because these people got published in Circulation, some senior peer reviewer somewhere agreed that this is a well-established definition for these terms.

In summary, there does not appear to be consensus on what alveolar dead space is, or how to represent it in a human-readable sentence. From the abovestated gibberish, fragments of reason can be extracted to make memorable soundbites for the vivas:

There are several factors which affect the size of this volume:

Dead space due to right-to-left shunt

The presence of a large enough shunt can give rise to the appearance of increased physiological dead space, provided one uses the Enghoff definition of dead space. Observe, a clever example from Hedenstierna & Sandhagen (2006), rendered into puerile diagrams: 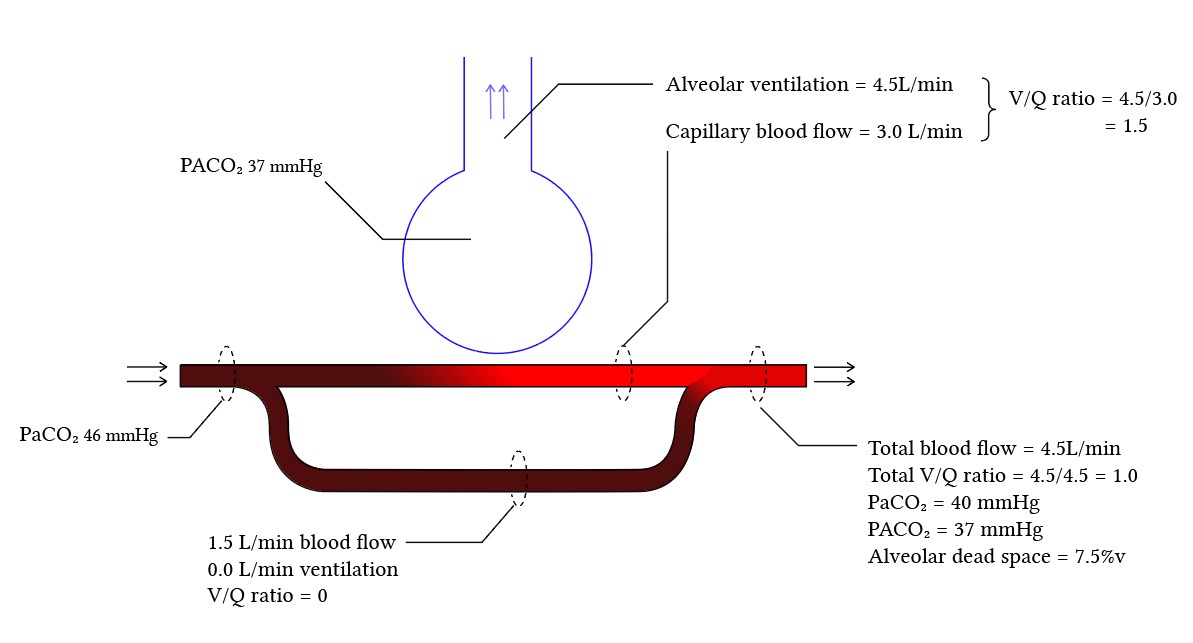 In this thought experiment, the dead space fraction of the tidal volume is 7.5%. However, one should note that in this one-alveolus model, there are no unperfused lung units. Thus, where shunt is substantial, it can create the illusion of alveolar dead space because it increases the difference between the alveolar and arterial CO2. The reader is warned: this is only an illusion, resulting from a limitation of the Bohr-Enghoff equation. There's no unperfused alveoli in there. Authors such as  Hedenstierna & Sandhagen (2006) even warn against giving this thing a name like "shunt dead space" because it "may give the reader the wrong impression that we do deal with a real dead space". It does, however,  behave very much like dead space, in the sense that increasing the ventilation will have little additional effect on decreasing the PaCO2.

The effect of airway equipment on changing the dead space is discussed in greater detail in the chapter on the effects of positive pressure ventilation. In summary, the main reason for the change is that under some circumstances the aforementioned equipment will either decrease the anatomical dead space by bypassing the upper airway structures, or add to it by adding extra volume in the form of circuit components.

Just as a reader rightly wonder how many more dead spaces they could possibly tolerate, this chapter confronts them with several more. References to these are seen throughout the literature, and there is probably some merit in discussing them. In short, they are named after researchers who first demonstrated some novel way of measuring dead space, and the volumes they describe are dead space as measured by the eponymous method. As such, each dead space has some boundaries and inaccuracies which mirror the limitations of their specific measurement technique, discussed in greater detail in the chapter on dead space measurement. Here, a brief summary will suffice: