This chapter is most relevant to Section F6(v) from the 2017 CICM Primary Syllabus, which expects the exam candidates to be able to "explain how these may be measured", where "these" are the components of dead space.  This has come up twice in the past papers:

The single best peer-reviewed resource for this topic is probably Roberts (2015). However, for the purposes of CICM exam preparation, limiting oneself to the dead space measurement section from Nunn's (p. 119-123 of the 8th edition) would be a safe and sanity-preserving step.

The Bohr equation in the measurement of physiological dead space

As upon inspiration some of the gas never reaches the alveoli and is stuck in the conducting airways, so some fraction of every tidal volume is going to resemble unchanged atmospheric air.   Sure, there might be a whole population of "dead-ish" alveoli which enjoy a trickle of perfusion and which therefore exchange some CO2,  but if one we so inclined, one could represent the tidal volume as a block of air sharply divided into two fractions, one which has only unchanged air and one which has exhaled alveolar gas, rich in CO2.

Christian Bohr's original paper "Uber die Lungenathmung" (1891) used this concept to determine the alveolar CO2, making an assumption about the volume of the dead space on the basis of cadaveric studies (i.e. the anatomical dead space, based on the measured volume of the conducting airways from cadavers). The author himself never intended for his equation to be used as a means of calculating dead space. However, it can be turned on its head to do exactly this:

Don't be confused by the unfamiliar Fs. "F" is for "Fraction", i.e. FECO2 is the fraction of CO2 in the expired gas mixture. These gas concentrations could also be represented conventionally, using partial pressures, which will yield the same result:

With this, one can calculate the "Bohr dead space". The problem with this is that one now needs to decide which alveolar CO2 to use as the value to plug into this equation. The regional alveolar CO2 varies significantly in the lung because of the regional differences in V/Q ratios; for example even in the healthy lung in a vertical position Brandis gives the apical PACO2 as 28 mmHg and basal PACO2 as 42 mmHg. Additionally, the equation returns all dead space as a result, which means one is unable to determine the specific size of the alveolar and anatomical spaces.

The Enghoff modification of Bohr's method

The mean alveolar CO2 (PACO2) being so difficult to estimate and measure in living subjects with lung disease,  Henrik Enghoff (1938) proposed a modification for Bohr's method to determine the "volumen inefficax",  a contribution which went unrecognised for over ten years. It is beautifully described by Nunn & Holmdahl (1979). The theory was that alveolar CO2 could be substituted with the arterial CO2 (PaCO2), because arterial CO2 is the mixed product of all the lung units and therefore should theoretically be representative of the average CO2 of all the alveoli put together.   Thus:

To be clear, what the Enghoff equation produces is slightly larger than the "proper" Bohr physiological dead space.  Arterial CO2 is generally going to be higher than the alveolar CO2.  The Enghoff dead space will therefore be affected by not only the volume of dead space but also by all the possible reasons for an increased PaCO2-PACO2 gap,  intrapulmonary shunt, diffusion impairment, V/Q heterogeneity and the sort of bronchospasm which prevents the convenient measurement of a PECO2 plateau. That is not to say that this equation is completely useless and inaccurate - instead, it is a highly sensitive detector of non-specific lung badness - but it certainly does not help you discriminate between the different causes of an EtCO2-PaCO2 gap. Having said that, most ICU patients do not have a 50% shunt, and so this equation is generally viewed as being good enough for government work. In fact, it is good enough to be the de facto definition of physiological dead space in many textbooks.

Ward Fowler came up with this in the late 1940s when nitrogen sensors became available. 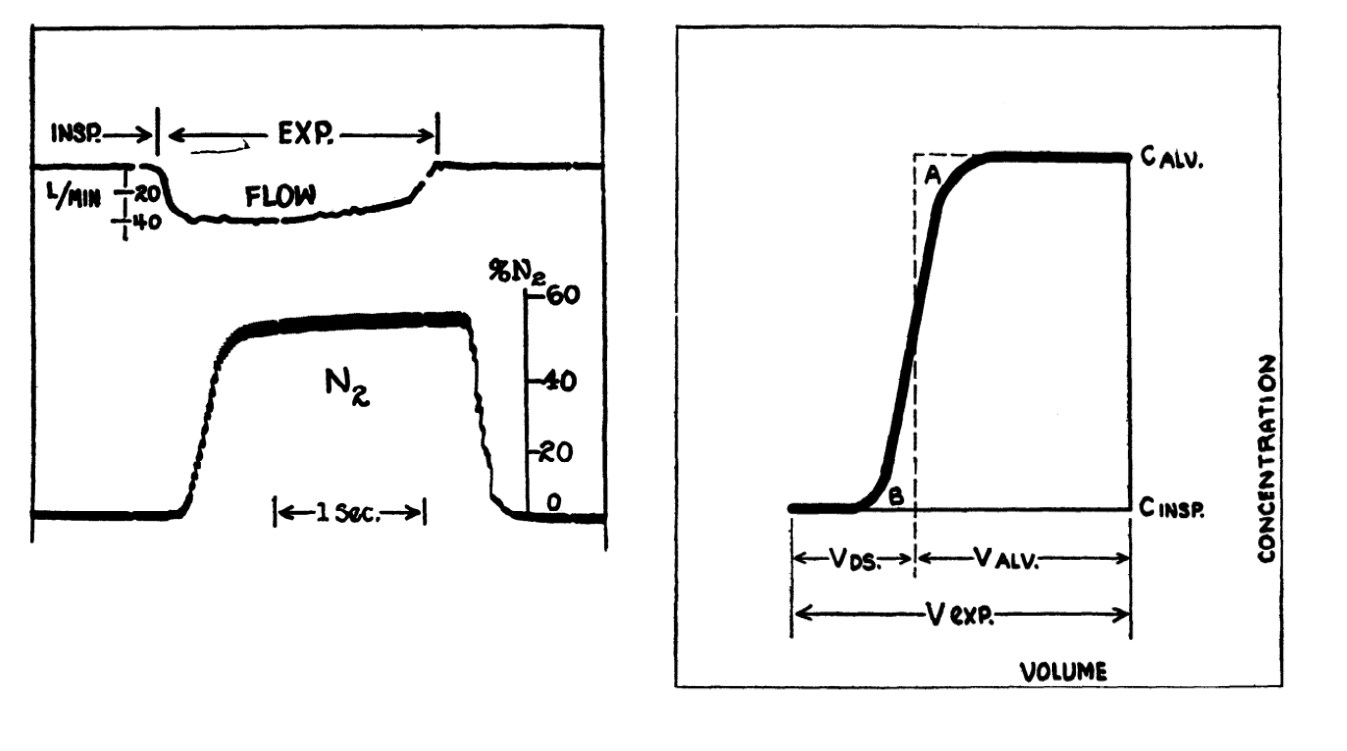 Out of respect to the original authors, the diagrams they used are reproduced above. Unfortunately, Fowler relied extensively on the phrase "see text for explanations", and for maximum effect these pictures still require a thousand words to accompany them, which defies the point of pictures to some extent. Though it would be a shame to Adobe all over those beautiful diagrams (clearly hand-drawn for the publisher), the author needed to do so, at least in order to digest the concepts himself.

In short, the idea is, you attach your subject to a pneumotachograph (to record flow over time, which is volume) and a sensitive nitrogen sensor to detect the nitrogen level. Before the experiment begins, the sensor will read something like 79%, as that's the concentration of nitrogen in room air. 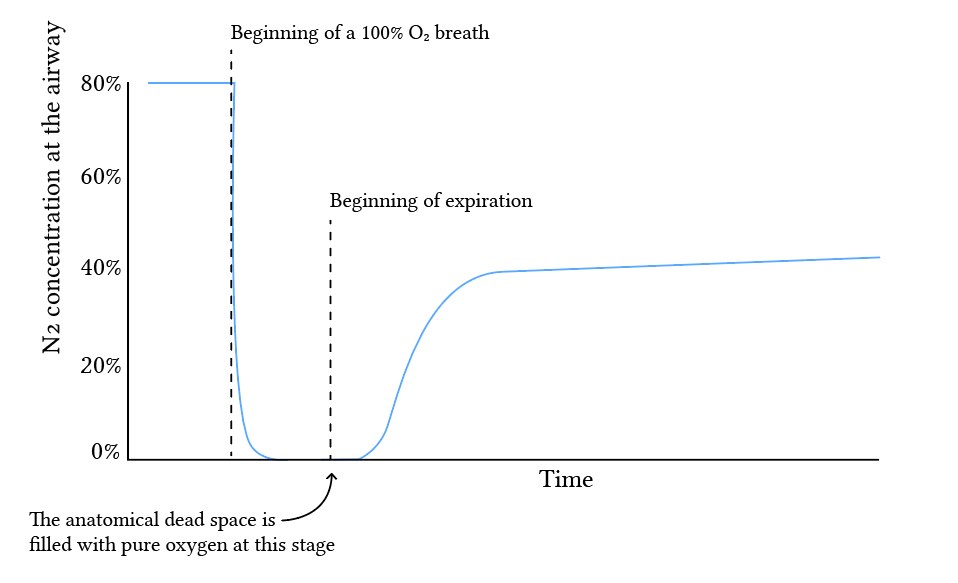 Then, the subject exhales. Fowler observed three distinct phases here. The initial wafts of gas coming out into the sensor will be coming out of the dead space, and will therefore consist of pure oxygen. This was Fowler's Phase I. The last stages of the exhalation will be mainly the contents of gas-exchanging alveoli, and will therefore be relatively rich in nitrogen and stable in its concentration. This plateau is Fowler's Phase 3. In the middle, there is a phase where the exhaled nitrogen concentration rises rapidly, and this represents gas from the fast time-constant alveoli mixing with gas from the more distal airways. 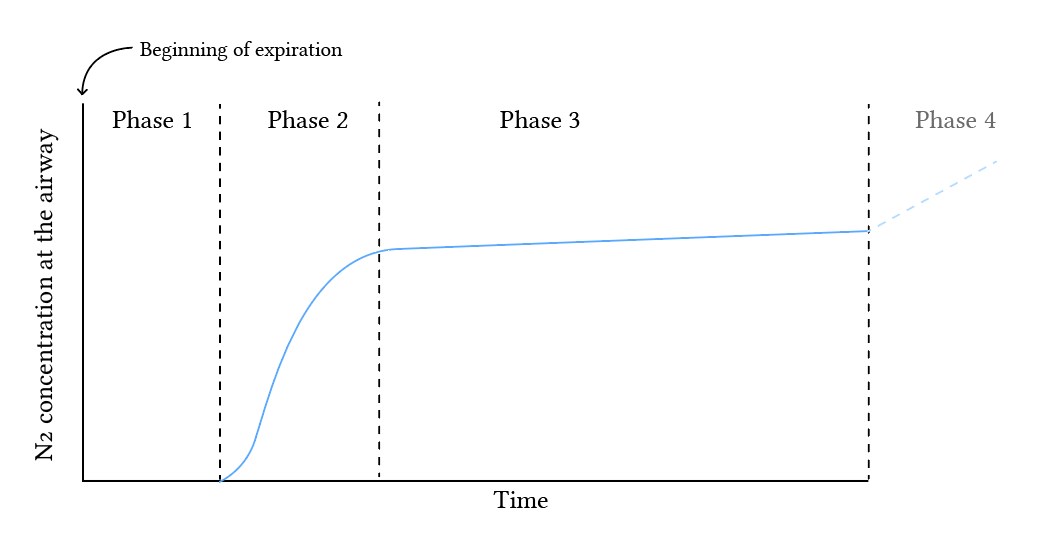 If one waits any longer, one can also see a Phase IV, where there is another increase in nitrogen concentration - this represents the closing capacity, as small airways in the more compliant regions of the lung close, and only poorly compliant alveoli continue to exhale their nitrogen-rich gas (without it being diluted, its concentration rises). However this has nothing to do with the measurement of dead space and it was not a part of Fowler's original experiment. 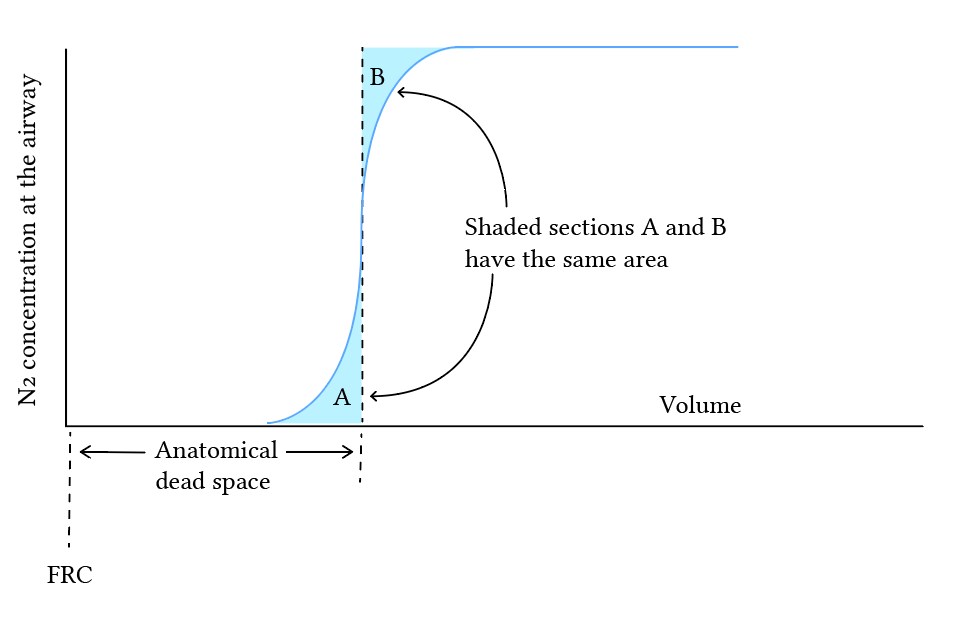 Thus, one can measure the volume of the anatomical dead space. The initial stages (where no nitrogen is coming out) is definitely coming from the conducting airways. For the rapid upslope of nitrogen, the situation is somewhat more ambiguous, as some airway oxygen is now mixing with some alveolar nitrogen. To get some sort of cut-off point to call the end of dead space and the beginning of alveolar gas, Fowler decided to use a rough estimate (it was "estimated visually with the help of a squared transparent ruler"). The midpoint of that rising nitrogen slope was selected by comparing two areas, above and below the curve. Fowler validated this technique by creating numerous artificial rubber dead spaces of known volume and then demonstrating that this visual estimation method is able to accurately predict that known volume.

It stands to reason that, if you have a Fowler dead space (anatomical) and a Bohr/Enghoff dead space (total), subtracting one from the other should give you your alveolar dead space. That is in fact what is generally done. The direct measurement of the alveolar dead space has been elusive, in the sense that we do not have a good technique which determines only this volume.

Fletcher, R., et al. "The concept of deadspace with special reference to the single breath test for carbon dioxide." British journal of anaesthesia 53.1 (1981): 77-88.

Tang, Yongquan, Martin J. Turner, and A. Barry Baker. "A new equal area method to calculate and represent physiologic, anatomical, and alveolar dead spaces." Anesthesiology: The Journal of the American Society of Anesthesiologists 104.4 (2006): 696-700.